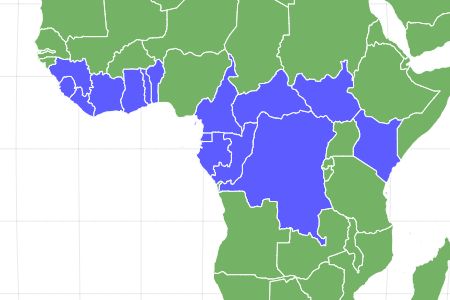 View all of our Bongo pictures in the gallery.

View all of the Bongo images!

The Bongo is a large species of antelope that is found inhabiting the jungles and forests of Eastern, Western and Central Africa. They are the largest forest-dwelling antelope species and one of the most distinctive, with a chestnut coloured coat and long horns that spiral as high as 90cm in males. There are two recognised sub-species of Bongo which are the Mountain Bongo (also known as the Eastern Bongo) and the Lowland Bongo (also known as the Western Bongo), which is primarily found in the forests of Central Africa. Both species of Bongo are threatened by both hunting and habitat loss with populations having declined significantly enough for it to be listed as a near threatened species by the IUCN, as although it still has a relatively wide distribution, populations are becoming more and more isolated.

The Bongo is a large and heavy-bodied antelope with a short and glossy, orange or chestnut coloured coat that is darker on the underside and patterned with between 10 and 15 vertical white stripes that help the Bongo to remain camouflaged in the dense jungle. They also have distinctive white markings on their cheeks, a white chevron between the eyes and nose and a white crescent-like shape on their chest. The legs of the Bongo are banded with both white and black and their long tail has a tufted tip. Bongos also have large ears giving them very sensitive hearing and a long prehensile tongue which allows them to grip onto leaves higher up and strip them from the branches with ease. Their distinctive spiraled horns usually have either one or one-and-half twists, with those of males being longer and more coiled than the horns of the slightly smaller and lighter-coloured females. Bongos also have a thin mane that runs along their body from the shoulders to the rump.

The Bongo is an animal that is natively found inhabiting the dense forests of Eastern, Western and Central Africa and although it is still found in a number of different countries today, populations are decreasing in size with the Bongo now actually considered to be extinct from some regions. The Lowland Bongo inhabits the dense lowland forests and bamboo thickets of Western and Central Africa, and although is still found throughout much of its historical range in Central Africa, is becoming rarer in the West. Mountain Bongos were once found in the highland forests of both Kenya and Uganda but are now restricted to just four areas in Kenya after having disappeared from Uganda at the beginning of the twentieth century. Populations have decreased rapidly throughout much of their natural range due to habitat loss, mainly in the form of deforestation.

The Bongo is a shy and elusive animal that is seldom seen by people due to its highly nocturnal lifestyle. As with many other antelope species, Bongos turn and flee almost immediately when they feel threatened and can disappear quickly into the surrounding forest, running with their horns laid back against their body to prevent them from getting tangled up in the vegetation. Male Bongos are solitary animals and will only come into contact with other Bongos to breed, whereas although females can be found on their own, they often form herds that can contain up to 50 members and consist of the females and their young (for protection). Bongos produce a variety of different calls so they are able to communicate including grunts, snorts, moos and bleating to warn others of approaching danger or when they are in distress.

Most mating tends to occur between October and January, after which the female Bongo will give birth to a single calf following a gestation period that lasts for around 9 months. In order to try and protect the vulnerable calf from predators, females give birth to their calf in dense vegetation where she leaves it lying silently for about a week. During this time, the mother returns regularly to nurse her calf and when the calf is strong enough they both join-up with other females and their young for better protection. Bongo calves grow relatively fast and their horns begin to show by the time they are three or four months old. Weaning occurs at six months but calves tend to remain with the nursery group for longer.

The Bongo is a herbivorous mammal which means that they only feed on plant matter in order to gain the nutrition that they need to survive. Bongos are selective browsers that feed on leaves, roots, bark and grasses under the cover of night to keep them safer from the numerous carnivorous predators that they share their habitats with. The Bongo has a prehensile tongue which helps it to reach fresh leaves higher up and also aids it when pulling roots out of the ground. Like other antelopes (and cattle which they are closely related too), the Bongo has a four-chambered ruminating stomach to help it to break down the cellulose that the plants contain. Food passes through their digestive system very slowly in comparison to other mammals to maximise the nutritional intake.

Bongos are prey to numerous large predators in their surrounding environments with Leopards being their most common natural threat along with Lions in certain areas. The young calves are also vulnerable to predation from Pythons and Hyenas throughout much of their natural range. Another big threat to Bongos is the fact that they are particularly susceptible to disease with the entire population having been nearly wiped out in the late 1800s. They are however, at the biggest risk from people who don’t just hunt them both directly and by setting snares but have also obliterated much of their one vast natural range through deforestation to both make way for agriculture and to gather tropical woods for the timber industry.

Although they tend to be most active between dusk and dawn, Bongos are known to occasionally browse during the day but will never leave the dense vegetation that surrounds them. To help them to cool down in the heat, Bongos wallow in mud which they then rub onto a tree as a way of polishing their smooth and heavy horns. Despite being hunted for food in many areas, in others there is a great deal of superstition surrounding the Bongo by the native people. Some believe that not only eating but just touching Bongo will cause the individual to have spasms and they are therefore not too affected by hunting in these places.

In many areas throughout their natural range, Bongos have been hunted by people for meat but also became a prize target for big-game trophy hunters which devastated local populations. The biggest impact that people have had on the Bongo though is the fact that vast areas of their natural habitats have disappeared to make room for agriculture and to provide grazing for livestock. This increasing closeness to Humans has led to outbreaks of disease in Bongos, along with severe population declines due to their dwindling habitats and therefore, an increasing lack of both food and suitable forest cover which Bongos heavily rely on.

Today, the Bongo is listed by the IUCN as an animal that is Near Threatened by extinction from the wild in the near future. Although the Mountain Bongo has always been rare it is feared that there could be as few as only 75 individuals left in the highland forests of Kenya, where they are now protected. The Lowland Bongo is becoming rarer in Western Africa but populations although decreasing, remain widespread throughout much of their historical range in Central Africa.

Are Bongos herbivores, carnivores, or omnivores?

What Kingdom do Bongos belong to?

Bongos belong to the Kingdom Animalia.

What class do Bongos belong to?

Bongos belong to the class Mammalia.

What phylum to Bongos belong to?

Bongos belong to the phylum Chordata.

What family do Bongos belong to?

Bongos belong to the family Bovidae.

What order do Bongos belong to?

Bongos belong to the order Artiodactyla.

What type of covering do Bongos have?

Bongos are covered in Fur.

What genus do Bongos belong to?

Bongos belong to the genus Tragelaphus.

Where do Bongos live?

In what type of habitat do Bongos live?

What are some predators of Bongos?

Predators of Bongos include leopards, hyenas, and lions.

How many babies do Bongos have?

The average number of babies a Bongo has is 1.

What is an interesting fact about Bongos?

What is the scientific name for the Bongo?

The scientific name for the Bongo is Tragelaphus eurycerus.

What is the lifespan of a Bongo?

What is a baby Bongo called?

A baby Bongo is called a calf.

How many species of Bongo are there?

There are 2 species of Bongo.

What is the biggest threat to the Bongo?

The biggest threat to the Bongo is habitat loss.

What is another name for the Bongo?

The Bongo is also called the lowland bongo or mountain bongo.

How many Bongos are left in the world?

How fast is a Bongo?

A Bongo can travel at speeds of up to 43 miles per hour.