The smallest species of elephant!

Click through all of our Borneo Elephant images in the gallery. 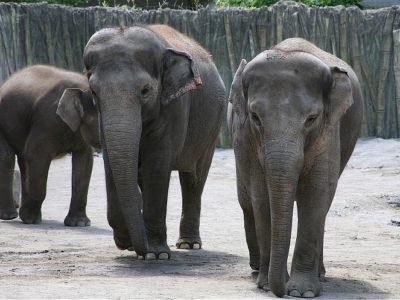 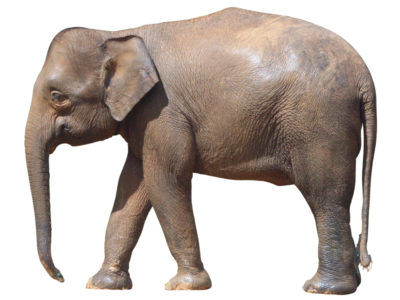 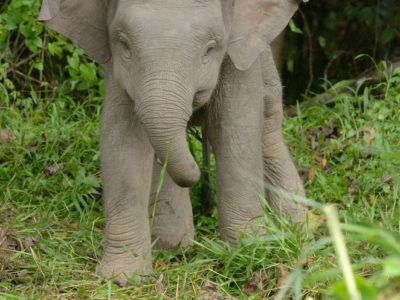 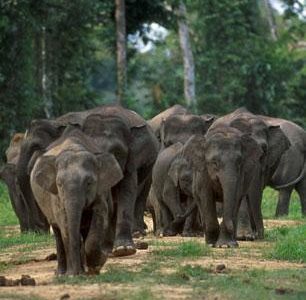 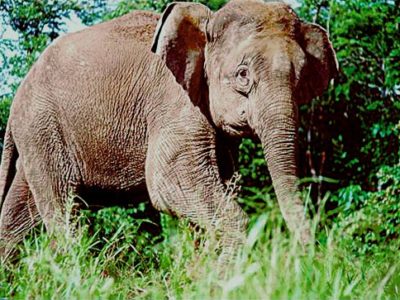 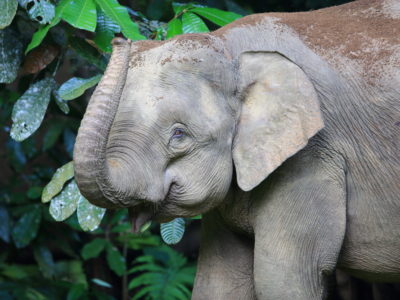 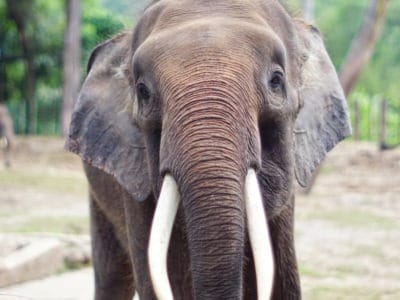 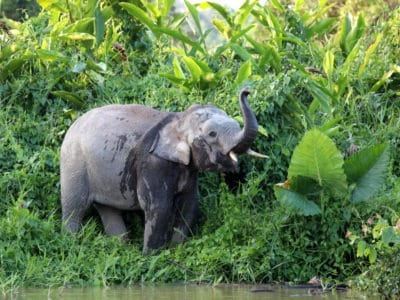 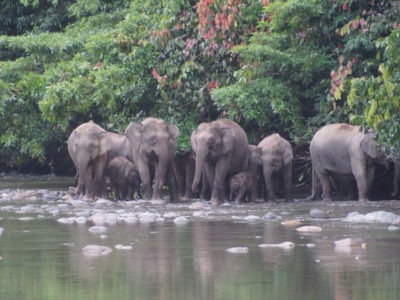 View all of the Borneo Elephant images!

The Borneo elephant is a subspecies of the Asian elephant and the only member of the species to reside on the island of Borneo.

This subspecies also goes by the alternative name of pygmy elephant. However, there is nothing small about this gigantic creature. By any measurement, it is still the largest land animal on the island of Borneo. Much about its behavior remains unknown. Until the World Wildlife Fund attached satellite collars to a few Borneo elephants in 2005, most of what we know about this subspecies was based upon extrapolation from the study of other Asian elephants. As its fate hangs in the balance, it’s now a race against time to save it from extinction.

The Borneo elephant shares many features in common with its Asian relatives: the two-domed head, the smaller rounded ears, the four hooves on the hind foot, and the gray skin with tiny spouts of hair. But it also exhibits many physical differences, including straighter tusks and a longer tail. The Asian elephant is generally smaller than the African elephant, but the Borneo elephant is around 30% smaller than other Asian elephants. Small, in this case, is relative, since the Borneo elephant measures between 8.2 and 9.8 feet tall and between 6,500 and 11,000 pounds in weight. Males tend to have a much larger weight than females on average.

The elephant trunk is an all-around incredible instrument. Thanks to the large concentration of muscles and nerves, it is the main means through which the elephant interacts with the world: breathing, smelling, drinking, communication, and grabbing objects. (It also has a finger-like appendage on the end to help with this.)

The elephant needs an equally impressive brain to perform all of these amazing feats with its trunk. Borneo elephants have not been widely studied for their cognition, but the elephant family as a whole has a highly developed neocortex (similar to humans, apes, and dolphins) that enables it to use tools, recognize itself in the mirror, solve complex problems, mimic behavior, and feel a range of complex emotions. Observations suggest that the elephant can experience grief and mourning over the death of a close friend or family member.

The herd is the center of all social activity and daily life for some elephants. This highly cooperative and altruistic unit consists of five to 20 adult females (called cows) and their offspring. The male bulls usually wander off on their own at a young age or join all-male bachelor groups, but the females tend to stay with the same herd for much of their lives. The oldest and largest female typically becomes the matriarch of the entire herd. She helps the group make decisions and instructs younger mothers on how to care for their young.

The Asian elephant is a crepuscular species, which means it sleeps during the day and accomplishes most of its activities during the dawn and dusk hours. Defying its rather cumbersome stereotype, the elephant is a fast runner and a surprisingly good swimmer. It can submerge its entire body in the water to stay cool. Only its trunk is visible above the water to help it breath. The elephant will also cover itself in mud or soil to keep its body temperature down during the warmer months.

The life of the herd revolves around a nomadic existence. This means it wanders around a massive territory in search of waterholes and abundant sources of food. Multiple groups will sometimes join together based on the season, habitat, and other conditions.

The Borneo elephant, as the name implies, is endemic to the northeastern part of the island of Borneo. Although isolated from the rest of Asia, Borneo is one of the largest islands in the Pacific and a source of immense biodiversity. The greatest concentration of the Borneo elephant is found in the Malaysian state of Sabah at the very northern tip of the island. Here it wanders the forests and grasslands for 12 to 18 hours a day in search of resources.

The Borneo elephant is an herbivorous animal that feeds on a diverse diet of different plant species, including flowers, fruits, leaves, grains, and bark. In order to sustain itself, one elephant alone may consume hundreds of pounds of food in a single day either by grazing along the ground or browsing on the leaves and shoots of trees. The trunk functions as a versatile limb that can grasp vegetation and bring the food to its mouth.

Because of its formidable size, the Borneo elephant has nothing to fear from any natural predators. Even the youngest elephants are quite large and in any case protected by the herd. The only real threat is humanity. Because this subspecies requires a large amount of land in which to live, deforestation for logging, agriculture, and plantations has degraded its natural habitat, which not only creates fragmented populations, but also leads to direct confrontation with people. Elephants are sometimes killed or harmed because they accidentally destroy crops as they move through farms and plantations. Some elephants are just the victim of unfortunate circumstances. It is estimated that around 20% of this subspecies has sustained injuries from illegal snares to catch smaller game.

The reproductive habits of the Borneo elephant are not well studied, but based on what we know about other Asian elephants, several facts can be extrapolated. The most important element of male sexual behavior is a temporary condition called musth. During these periods, the male’s hormones become elevated and the testes are enlarged. This allows the male in musth to compete with other elephants (who are usually not in musth) for the sexual rights of the female by wrestling, pushing, or ramming with their tusks. The weaker male will yield to the stronger male before these competitions turn too into a serious and deadly fight. This system tends to favor older males, because musth gains in intensity with age.

Although elephants can mate all year round, it is believed that the female elephant is reproductively receptive for only a limited time of the year. She will demonstrate her sexual availability through various vocalizations and movements, triggering the males to compete for her affection. It is usually her choice whom she will mate with, but she prefers males who are in musth because it’s a signal of strength and dominance.

After copulation, the male will sometimes stay with the female just long enough to prevent her from mating with anyone else, but he otherwise plays no role in parental care. Once the father leaves, the female carries the young offspring for about 22 months, which is perhaps the longest of any mammalian species in the world. She produces only a single calf at a time, and rarely does she have twins. This is because the Asian elephant has an exceptionally long development time.

Although they start out weighing more than 100 pounds, the calves need to a lot of growth before reaching their full size. The child will nurse on its mother’s milk for at least two years after birth, but full weaning doesn’t occur for almost four years. During this time, both the mother and her relatives will take an active role in the calf’s development. They will provide the calf with protection and tutelage until it is ready to become independent. Because of the massive investments required to raise the offspring, she only breeds once every four to five years.

Both males and females tend to become sexually mature at around 10 to 15 years of age. If the elephant is stressed, then sexual maturity may be delayed by several more years. The typical life expectancy of this species is around 50 years in the wild, though some individuals can live up to 60 or 70 years.

The Borneo elephant is an endangered species with fewer than 1,500 individuals remaining in the wild. It is estimated that population numbers have fallen some 60% since 1980. In order to create more sustainable foresting practices, some organizations like the World Wildlife Fund are working with local plantation managers and owners near the elephant’s habitat to create reforested wildlife corridors to enable the free movement between fragmented areas. This should also reduce conflicts with humans.

Borneo Elephants in the Zoo

The Oregon Zoo has the only Borneo elephant in the United States: a female called Chendra. She was born in Sabah, Malaysia in 1993 and later found wandering around a palm oil plantation, hungry and alone, with wounds on her front legs and left eye. Unsuited for life in the wild, she came into the possession of the Oregon Zoo in 1999. Chendra is now housed at the elephant lands section along with other Asian elephants. This section has three interconnected outdoor spaces for the elephants to roam in, plus feeding stations, mud wallows, and a massive pool.

How many Borneo elephants are left?

It is estimated that there are only around 1,500 Borneo elephants left in the wild.

Why is the Borneo elephant endangered?

Deforestation from logging and plantations is the biggest threat to the elephant’s survival. It is estimated that some 1.3 million hectares of forest is lost in Borneo per year. A hectares is equivalent to 10,000 square meters. More than half of the forests have already been lost from their peak.

How big is a Borneo elephant?

The Borneo pygmy elephant can grow up to 9.8 feet tall and 11,000 pounds in weight. Despites its enormous size compared to most animals, this actually makes it one of the smaller types of elephants; hence the nickname of pygmy elephant.

What do Borneo elephants eat?

The diet of the Borneo elephant consists of leaves, shoots, fruits, bark, and whatever other plant matter it can find. In the diverse ecosystem of Borneo, there is no shortage of vegetation to choose from. This is necessary, because the elephant consumes close to 10% of its body weight in food every single day.

Where are Borneo elephants found?

The Borneo elephant is endemic to the forests and grasslands of northeastern Borneo.

How fast is a Borneo Elephant?

A Borneo Elephant can travel at speeds of up to 27 miles per hour.

How to say Borneo Elephant in ...