Click through all of our Common Loon images in the gallery. 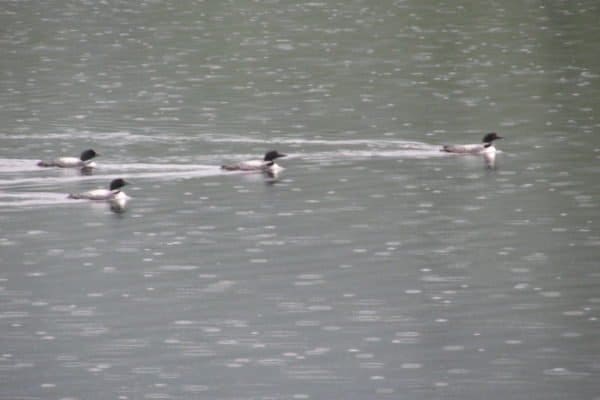 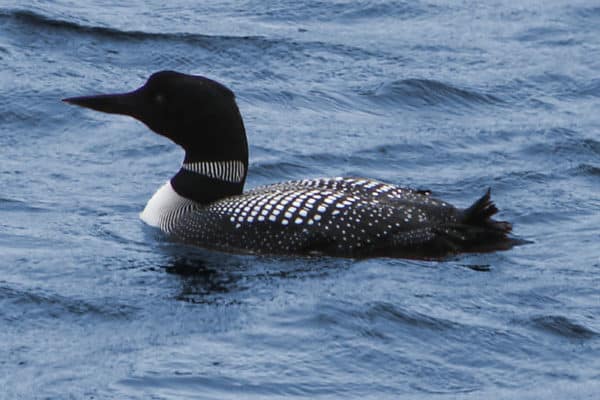 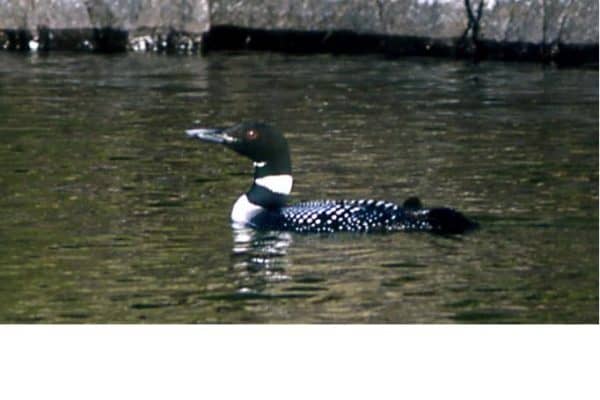 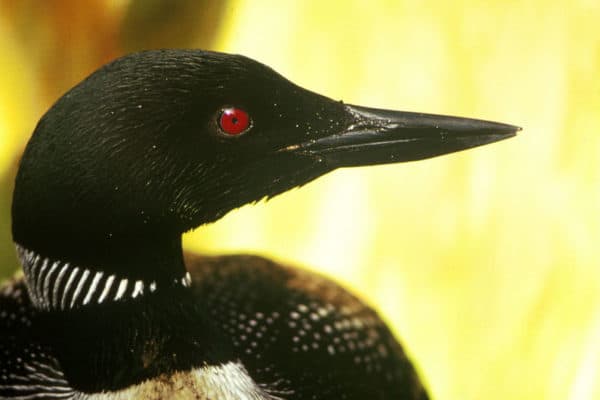 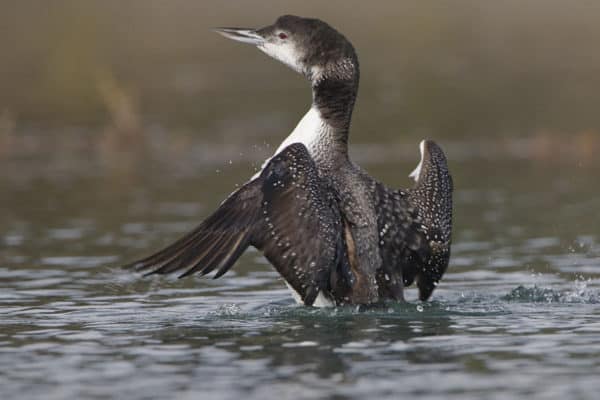 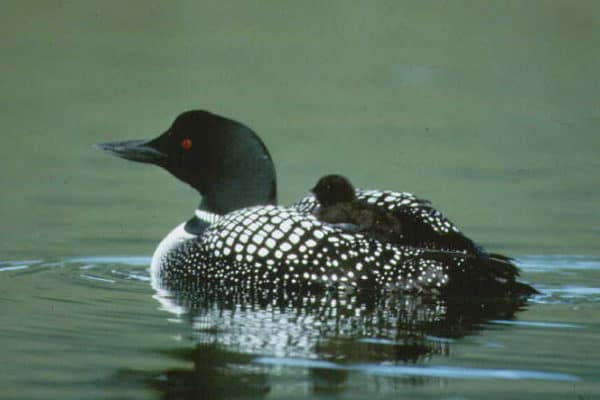 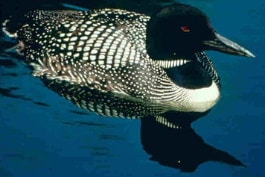 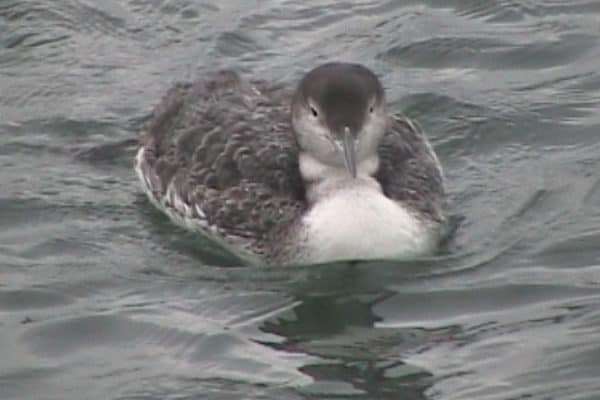 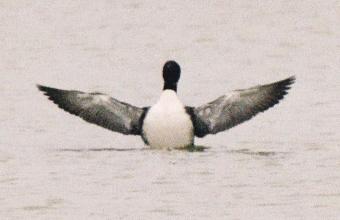 View all of the Common Loon images!

Though awkward on land, the common loon bird is a graceful hunter on the water. This mostly cold-weather waterfowl learns to dive before it learns to fly, and will come back to the same nest with the same mate every year for almost a decade. The bird has found its way into a number of native North Americans’ legends, as well as being the face of the Canadian one-dollar coin. Though pollution eliminated common loons in much of eastern North America, this fowl thrives in Canada, particularly. Though the name “loon” comes from its goofy walk, it’s probably described better by its other English name: “Great Northern Diver.”

The scientific name for the common loon, also known as “Great Northern Diver,” is gavia immer. Gavia comes from the latin term for seabird, and immer could be from the Norwegian word for “ash” (for its appearance) or the latin words immergo or immersus, meaning “submerged” or “diving.”

The loon looks like many other ducks, except its bill is more pointed, like a songbird. Its feathers are mostly black, with an almost grid-like pattern of white spots across its wings and throat and a white underbelly.

Common loon sounds are well known to people who live near their habitats. These include a distinctive yodel, a wailing sound and a hooting noise. The common loon call is used to find a mate or declare a nesting site.

The feet on the common loon

The feet of a common loon are set further back on its body than other water birds. This makes them excellent swimmers and divers. However, it looks awkward whenever it walks on land. That silly-looking walk is believed to be why it earned the name “loon.” Its unique feet also make it land different from other ducks. While most ducks land on water by skimming their feet, common loons have to skim on their belly.

Common loons are birds that prefer colder areas close to water. They are most often found throughout Canada and are common in New England. In addition to Canada, loons are common to Alaska, Greenland, Iceland and Scotland. They tend to live near smaller ponds during the summer, when they nest, and migrate to larger lakes and coastal areas during the winter.

The common loon eats lots of fish. It is an expert at diving into water to hunt. The specific fish a common loon eats depends on where it spends most of its time. For loons near coastal areas, dinner means flounder, herring, rock fish and sea trout. Meanwhile, common loons near fresh water will eat bass, perch, pike, sunfish and trout.

To hunt, a common loon will first poke its head under the surface of the water. Once it sees its prey prey, it can dive as deep as 200 feet! Smaller fish can be gulped whole, while larger fish are carried to a place where they can be eaten.

Humans stand as the biggest threat to loons, though the threat is not severe. Water pollution has caused common loons to disappear from eastern North America. However, the International Union for Conservation of Nature’s lists the common loon as “least concern,” meaning it is not currently at risk of disappearing.

Common loons can also risk having their eggs taken by small mammals. It may change nesting sites when this happens.

How pollution affects the common loon

Toxic water poses a threat to the common loon, because it prefers the same kind of water in which it was born. That means that a common loon hatched on a polluted lake will, according to some research, seek out a similarly polluted lake when it nests later in life. It will seek this type of lake, even if that lake has fewer fish or is worse for hatching new chicks.

Common loons breed monogamously, meaning the same male and female will breed every year. Common loons live for about 10 years, and will breed once a year for most of their lives. Each year, a common loon female will produce two baby loons, or chicks. This is much less than typical water birds. A female mallard duck, for example, will lay as many as 13 eggs each year.

Common loons will generally build a nest near the edge of water, mostly out of sticks, reeds and grass. They use the same nest, or nesting site, every year. The male might move the nest if eggs are lost to predators.

Common loons begin breeding at age two. They will find a mate during early summer and the two will stake off a nesting site by circling it overhead and making a yodeling noise. The mother will typically lay two eggs. Common loon eggs will sit for almost a month before hatching, with both parents taking turns sitting on the eggs. After hatching, both mother and father feed the chicks while they are growing. It will take the chicks nearly three months to learn to fly, but less than a week to swim and dive. The male and female will migrate separately to a wintertime places after the chicks have grown. The two then return to the same breeding ground at the start of each summer.

The International Union for the Conservation of Nature (IUCN) estimates as many as 640,000 common loons exist worldwide. Most of these loons are located in North America, particularly in Canada. About 2,600 common loons are estimated to live in Europe.

While the population seemed to be growing slightly in North America, the IUCN said it is declining in Europe.

Is the common loon a herbivore, omnivore, or carnivore?

Though many think of creatures such as lions when they think of the word, “carnivore” is also a title claimed by the common loon. Instead of sprinting across a forest or African plain, however, the common loon goes fishing. Its highly-specialized diving abilities make it an expert at catching all the fish it needs to survive. Catching fish is such an important part of the common loon life, loon chicks even learn to dive months before they learn to fly.

What Kingdom do Common Loons belong to?

What phylum do Common Loons belong to?

What class do Common Loons belong to?

What family do Common Loons belong to?

What order do Common Loons belong to?

What genus do Common Loons belong to?

What type of covering do Common Loons have?

Common Loons are covered in Feathers.

In what type of habitat do Common Loons live?

What is the main prey for Common Loons?

What are some predators of Common Loons?

Predators of Common Loons include humans, eagles, and ospreys.

What are some distinguishing features of Common Loons?

What is the average clutch size of a Common Loon?

What is an interesting fact about Common Loons?

Common Loons are also known as the Great Northern Diver.

What is the scientific name for the Common Loon?

The scientific name for the Common Loon is Gavia Immer.

What is the lifespan of a Common Loon?

What is the lifespan of a Common Loon?

What is the Common Loon's wingspan?