Known to guard the muddy banks! Click through all of our Edible Frog images in the gallery. 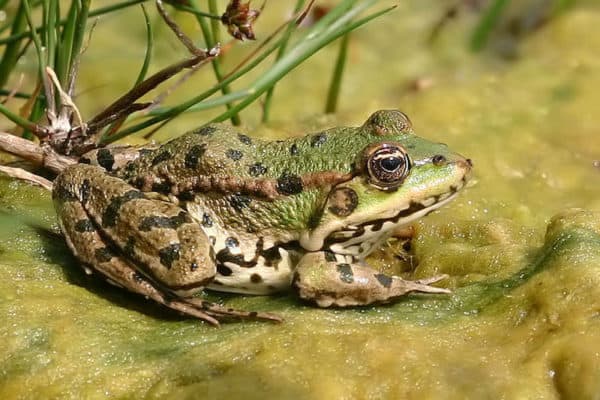 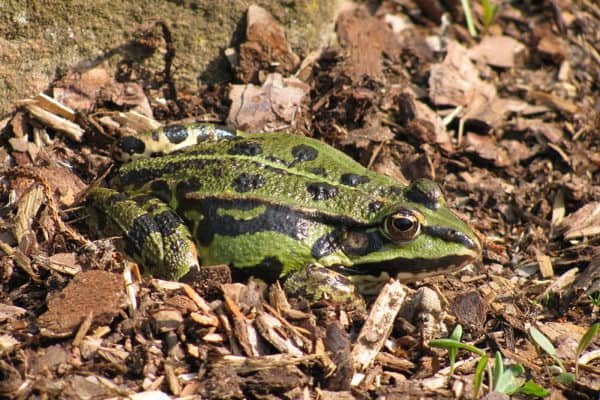 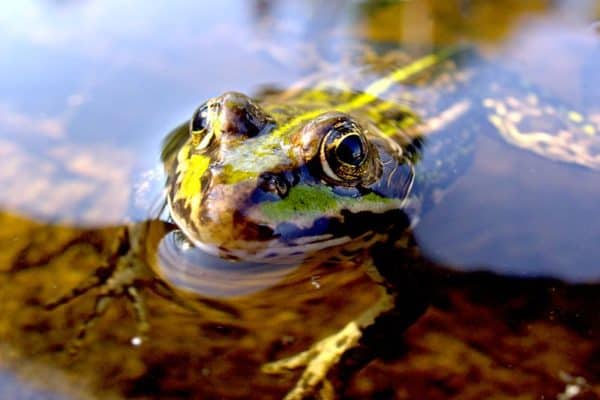 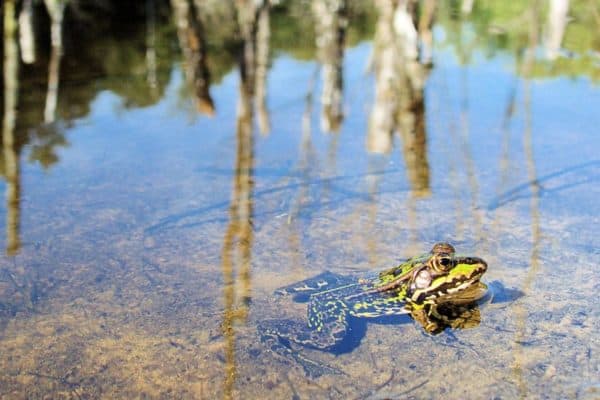 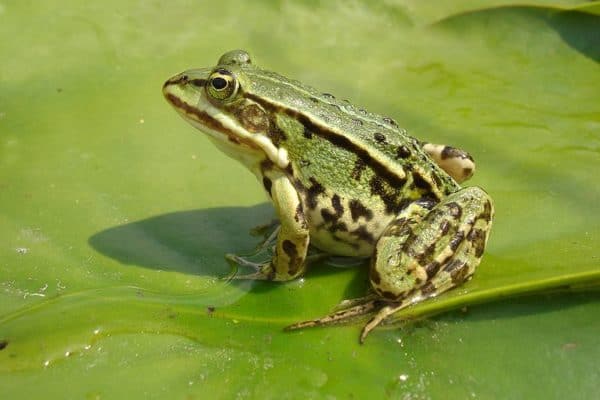 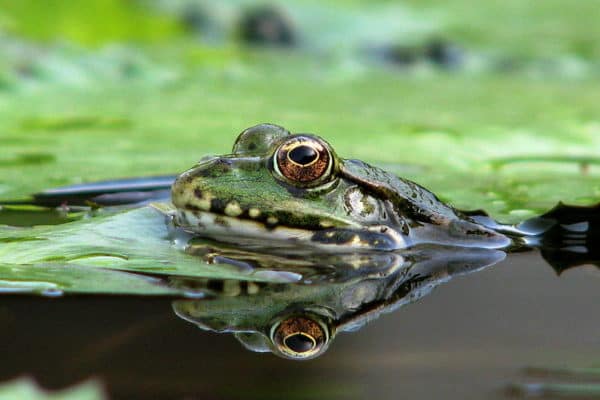 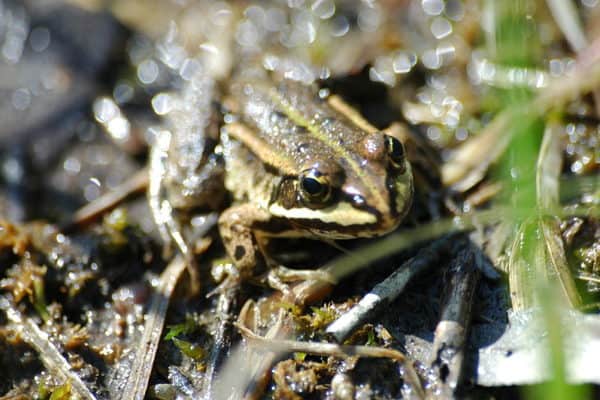 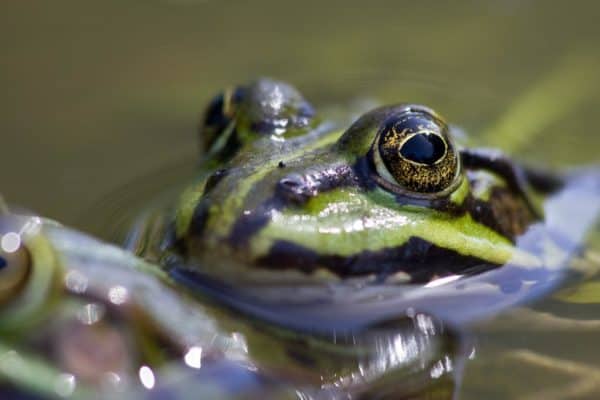 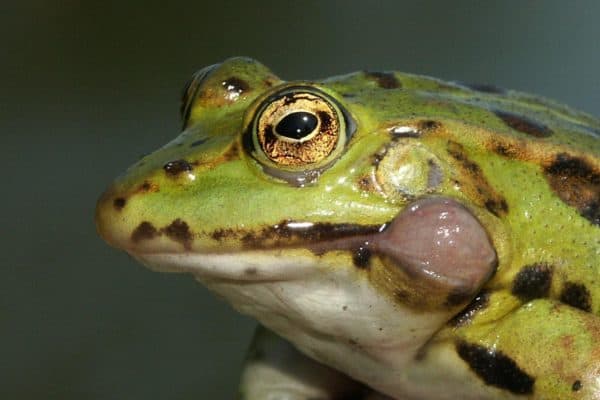 View all of the Edible Frog images!

The Edible Frog is a species of Frog found across Europe that is also known as the Common Water Frog and the Green Frog. The Edible Frog is a fertile hybrid of two other European Frogs, the Pool Frog and the Marsh Frog, that bred when populations where isolated close to one another during the ice ages. The scientific name of the Edible Frog means both “mud” and “guardian” as they are known to never stray far from water, almost guarding the muddy banks. It was first described in 1758 and has adopted its name as the “edible” Frog due to the fact that they are now seen as a culinary delicacy in France, particularly the legs.

The Edible Frog is a medium sized Frog growing to around 9cm in length. Females tend to be larger than males and have been known to get up to 12 cm long. Adult Edible Frogs are mainly green in colour with light patches of brown on their backs, yellow eyes and a white underside, covered in a few dark spots. There are number of distinct differences between males and females including the fact that males become much lighter (and greener) during the mating season. Male Edible Frogs also have vocal sacs on the outside of their cheeks and extra skin patches on their feet, both of which are primarily for mating.

The Edible Frog is found across central Europe and as far north as Germany and Estonia. Southern populations of the Edible Frog are found from Croatia, through northern Italy and into the south of France. There are also isolated populations in Sweden and Bulgaria which are thought to have migrated from the countries nearby. Edible Frogs spend all of their time either in or very close to water and are most commonly found in calmer parts of rivers and streams, where there is a slow but constant flow of fresh water. They are said to prefer more open areas and can also be commonly spotted around lakes, ponds and marshes.

Unlike many other species of Frog, the Edible Frog is a diurnal animal and is therefore most active during the day. This is when Edible Frogs are most likely to move away from the water, so that they can find a better supply of food or move to a different part of the water if need be. The Edible Frog is a relatively solitary animal so there is less competition for food but males are often seen sitting together in groups during the breeding season when they are trying to out-compete each other for a mate. Edible Frogs spend a large portion of their time sitting motionless on the muddy banks where they are perfectly camouflaged by their skin colour. They are also known to move onto land to hibernate during the colder winter months.

The breeding season for Edible Frogs begins during March and generally lasts for a couple of months. Males sing by drawing air in and out of their vocal sacs to produce the highest-pitched sound possible, as the female is most attracted to the loudest Frog. After courting her in a lake, pond or swamp, the male lets the female lay up to 10,000 eggs in a sticky mass into the water, before he fertilises them. Tadpoles can be as small as 0.5cm long when they hatch and are a grey/brown colour, then growing up to 7cm in length before metamorphoses occurs, and they leave the water as 2cm long young Frogs. Edible Frogs reach sexual maturity at the age of two and can live until they are 15 years old.

Adult Edible Frogs are carnivorous animals, surviving only by eating other animals. The tadpoles however, mainly eat vegetation although are known to supplement their diet with aquatic micro-organisms on occasion. Small invertebrates such as Insects, Spiders, Moths and Flies make up the majority of their diet along with larger aquatic animals like Fish, Newts and other Frogs, and even small Birds. Edible Frogs hunt for their food during the day and can be seen catching food in ponds, and even on land. There are even reports of Edible Frogs venturing up to 500 meters away from water in their quest for nutrition.

Edible Frogs remain very still when they are guarding the muddy banks, and this along with their camouflage, makes them very difficult for predators to spot. Their eyes are positioned near the top of their heads meaning they can also see danger coming whilst their body is mainly hidden. Snakes, Owls and water-dwelling Birds are the main predators of the Edible Frog, along with Humans who commonly eat them. Edible Frogs will jump into the water and hide if they sense approaching danger, and will make a loud screeching sound if caught. Edible Frog populations are also under threat from habitat destruction mainly caused by deforestation and water pollution.

The Edible Frog is one of the few animals in the world that is a fertile mix of two different species, as although similar but genetically different species are known to mate, it is very rare that their offspring will be able to breed. The kl. of the Edible Frog’s scientific name indicates that the species is made up of chromosomes that have been stolen from other species. The esculentus part of the Edible Frog’s scientific name is Latin for edible as this species is one of the most commonly eaten Frog species in the world.

As its name suggests, the Edible Frog is used as a food source by people across the continent, although they are most commonly eaten in France where Frog’s legs are often served as a national dish. The reason for Humans favouring this Frog over others is not really known but it may have something to do with their abundance. However, despite still being one of the most common Frogs in Europe, the Edible Frog is under threat across much of its natural range as more land is tampered with. Due to their permeable skin, they are also particularly susceptible to water pollution and will migrate from areas where the water quality has declined.

Today, the Edible Frog is listed as a species that is of Least Concern from extinction in the near future, but populations in certain areas are declining. They are particularly adaptable animals and have been able to inhabit man-made bodies of water. Providing however, that the water quality is good, there is an ample supply of food and little competition for it from other species.

Edible Frogs are Omnivores, meaning they eat both plants and other animals.

What Kingdom do Edible Frogs belong to?

What phylum to Edible Frogs belong to?

What phylum to Edible Frogs belong to?

What family do Edible Frogs belong to?

What order do Edible Frogs belong to?

What type of covering do Edible Frogs have?

What genus do Edible Frogs belong to?

Where do Edible Frogs live?

In what type of habitat do Edible Frogs live?

What are some predators of Edible Frogs?

Predators of Edible Frogs include foxes, cats, and birds.

What are some distinguishing features of Edible Frogs?

What is an interesting fact about Edible Frogs?

Edible Frogs are known to guard the muddy banks!

What is the lifespan of an Edible Frog?

Edible Frogs can live for 5 to 15 years.

What is a baby Edible Frog called?

A baby Edible Frog is called a tadpole.

How many species of Edible Frog are there?

There is 1 species of Edible Frog.

What is the lifespan of an Edible Frog?

Edible Frogs can live for 5 to 15 years.

What is a baby Edible Frog called?

A baby Edible Frog is called a tadpole.

How many species of Edible Frog are there?

There is 1 species of Edible Frog.

What is the biggest threat to the Edible Frog?

The biggest threat to the Edible Frog is habitat loss.

What is another name for the Edible Frog?

The Edible Frog is also called the common water frog or green frog.

How fast is an Edible Frog?

An Edible Frog can travel at speeds of up to 5 miles per hour.