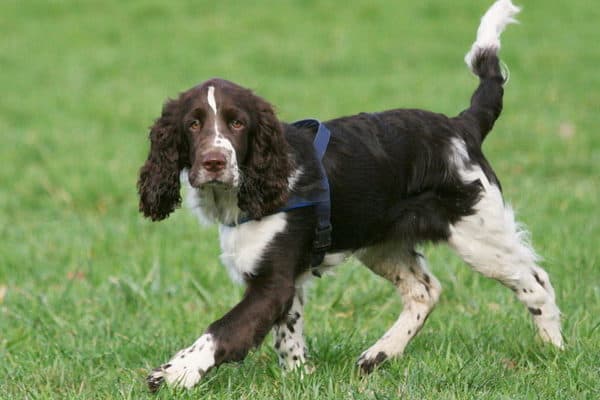 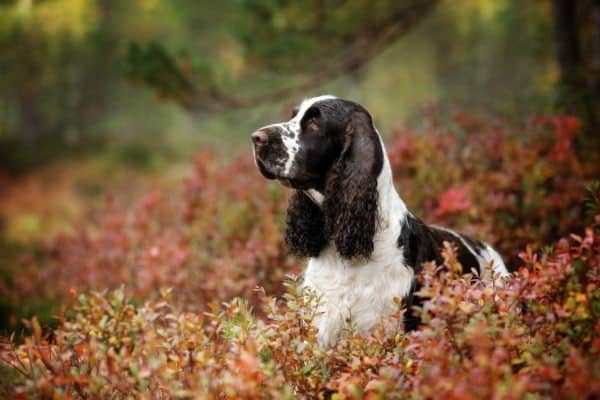 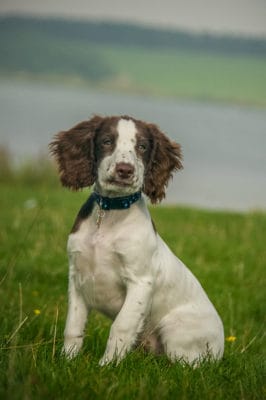 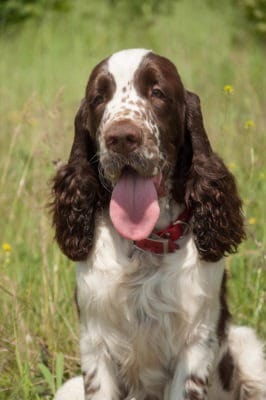 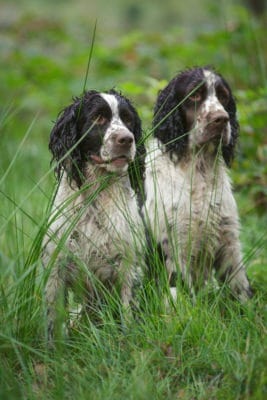 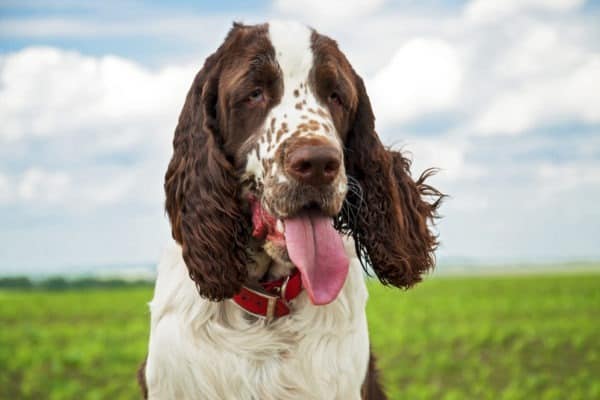 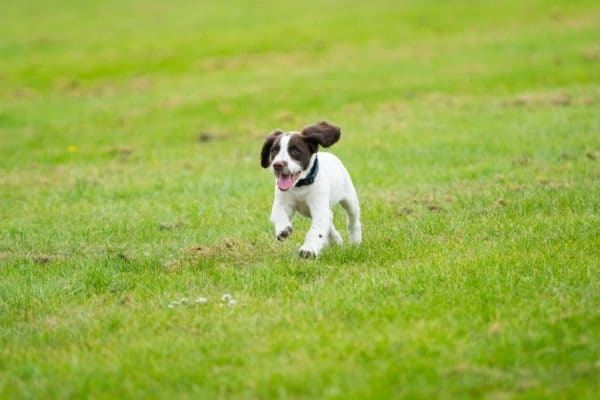 This post about the English Springer Spaniel may contain affiliate links to our partners. Purchasing through these helps us further the A-Z Animals mission to help us educate about the world’s species so we can all better care for them.

The English Springer Spaniel is a very common breed of gun dog that was originally created in England (probably bred from the Norfolk or Shropshire Spaniels in the mid-19th century) as a hunting companion to flush out and retrieve game. It is characterized by the big drooping ears, the bright round eyes, medium-length fur, and elegantly shaped legs. The coat color is typically some combination of white and black or white and brown.

The name describes both the country of origin and the use for which it was bred. Springer is the name of the tactic (flushing or springing) that it uses to chase birds up into the air. The name spaniel likely derives from its original country of origin, Spain. It was later imported into England beginning in the late 12th century.

There are generally two different types: the bench type and field type. The bench type is a show dog with a thicker coat and more feathering around the legs. The field type is more of a hunting gun dog with a shorter coat and less feathering. This breed has won the third most Best in Show awards at the Westminster Kennel Club Dog Show. According to the American Kennel Club, it is also one of the more popular breeds in the United States.

3 Pros and Cons of Owning an English Springer Spaniel

The English Springer Spaniel is a medium-sized dog with a muscular frame. Here is a deeper breakdown of its size and weight:

This is a healthy breed of dog with a life expectancy of 12 to 14 years. That does not mean it is free of health problems, however. This breed is prone to many genetic disorders such as progressive retinal atrophy (the degeneration of the eye), hip dysplasia (a developmental disorder of the hip socket), and elbow dysplasia (a similar condition that affects the elbow joints). Other potential problems include autoimmune disorders (in which the body’s immune system attacks its own cells), ear infection (especially because of the big, floppy ears), allergic sensitivities, eye problems, and cancer. These problems affect both the bench type and field type in almost equal measure. To sum up, these are the most common health issues with this breed:

The first characteristic you may notice about this breed is the very trusting and sweet eyes. This is perhaps a reflection of the spaniel’s eager personality and obedient behavior. The breed is keenly intelligent, fiercely loyal, and incredibly alert. It wants nothing more than to please its owner by performing tasks with its inspiring can-do spirit. The English Springer Spaniel may have the tendency to single out one person to bond deeply with. It will then suffer from anxiety and worry if it’s separated from its special friend for a long period of time.

The English Springer Spaniel is a very talented hunting gun dog that will find and retrieve game with incredible intelligence and athleticism. You do not necessarily need to take it hunting to enjoy this breed’s presence, but you should make sure that you have plenty of open space and lots of activities for it to do. If it doesn’t have a task to focus on, then it may become slightly lost or anxious.

How to Take Care of an English Springer Spaniel

The English Springer Spaniel is probably not ideal for an owner who wants a low-maintenance dog. It requires a fair amount of time and work to properly care for in terms of meeting its dietary, exercise, and grooming needs. Your pet will need annual checkups at the vet from the time it’s a puppy to catch potential health problems as early as possible.

The English Springer Spaniel requires high-quality dog food to supports its active lifestyle. Ideally, you should purchase food specifically targeted for the dog’s age and activity level. Treats are fine for obedience training as long as you don’t overdo it, and table scraps should be given only rarely. This breed is fairly fit, but it may have a tendency to become overweight. The typical calorie consumption is around 1,300 per day. If you think that your dog is beginning to gain weight, then you should immediately restrict calorie intake or change dog food and eating behavior.

Despite the length of its elegant hair, the English Springer Spaniel does not shed heavily. It probably requires no more than a weekly brushing to remove loose hair and dirt and keep the coat healthy and shiny. A slicker brush or metal comb should be sufficient to eliminate any small tangles from the dog’s coat. The areas around the head, heck, tail, and feet may require particular attention. The nails should be trimmed regularly as well to prevent pain and discomfort when the dog is walking or running.

The English Springer Spaniel is a very trainable breed thanks to its deep roots as a hunting dog. Owners should strive to put it through obedience training as early as possible for the best outcomes. Tricks, games, hunting, and other tasks are all activities at which it excels. However, this breed can become easily lost or discouraged without clear directions, so you should endeavor to keep its focus placed squarely on the task in front of it.

Due to its energetic nature, regular exercise of at least two hours a day should be sufficient to keep your dog occupied. This breed loves long walks or hikes, swift runs, swimming, toys, ball games, or sports and agility training. Thanks to its versatile nature, the English Springer Spaniel is willing to engage in almost any activity. Although this breed works well in many different types of living situations, the English Springer Spaniel is most ideal for owners with large yards or open spaces nearby.

Regardless of its health condition, your new English Springer Spaniel puppy needs an early visit to the vet. This routine examination is necessary to check for common health problems and keep it up to date with vaccinations. If your puppy begins to experience unusual symptoms, such as vomiting, diarrhea, loss of appetite, irregular urination, eye problems, or extreme irritability, then it may be a sign of a more serious condition, and you should have your puppy checked at the vet immediately.

The English Springer Spaniel is a natural friend and companion for all families. This breed will not overwhelm or frighten your children with its size or overly aggressive nature, but it’s also sturdy and good-natured enough to tolerate any rough play. It loves being around people of all ages, and it should be a good opportunity to teach your children a sense of responsibility while taking care of it.

If you are a fan of spaniels, then you might want to check out the following breeds of dogs:

According to the website Borrow My Doggy, these are the 10 most popular names for the English Springer Spaniel:

The English Springer Spaniel is a fairly common breed with an excellent historical pedigree. Some of the most famous individuals are listed below.

The English Springer Spaniel is a solid family dog that exhibits a friendly disposition to adults, children, dogs, and many other pets. After a brief adjustment period, you should not have many problems integrating a well-behaved spaniel into your home.

Despite the long hair, the English Springer Spaniel does not shed that much. It only require regular weekly brushing.

How big do English Springer Spaniels get?

The male spaniel only grows up to 20 inches in height and 50 pounds in weight. The female spaniel is slightly smaller.