One of the rarest species of seal on Earth

“A grey seal can dive 1,500 feet below the surface of the ocean and stay under for an hour.”

A grey seal is one of the rarest species of seal alive today. They can adapt to life on a coastline but go to the ocean when hunting for food. These seals can live from 25 to 35 years. The big, curved nose of grey seals has earned them the name the horseheads of the sea.

• Staying warm in the sea: A grey seal has two heavy layers of fur and one layer of blubber that combine to keep it warm in the cold ocean water.

• Expert hunters: Grey seals can see and hear better underwater than they can on land. This helps them to find their prey in the ocean waters.

• Talking seal talk: These seals communicate with one another in hoots, cries, growls and hisses. They also flap their flippers. Seals have their own language!

A male grey seal has silver-colored spots scattered over its thick, dark grey fur. Females have silver colored fur with dark spots throughout. Both males and females have short flippers that are perfect for helping them swim through the ocean waters but make them look like caterpillars while moving on land.

Male seals are around 10 feet long and can weigh up to 880 pounds! So, if you stood an adult male seal up on its back flipper, it would be half the height of an adult giraffe. Plus, an adult seal at 880 pounds weighs a little less than an adult Arabian horse. Females are around 7 1/2 feet long and weigh in at 550 pounds. A female seal is about half the weight of a grand piano.

The body of a grey seal is designed to help it survive on land and in the sea. It has two webbed front flippers featuring five claws on each of them. Their rear flippers help them to move through the water and change direction. The strength in a seal’s shoulders allow it to push itself up out of the water onto slippery rocks even when the waves are crashing behind it.

The long nose of a grey seal has earned it its scientific name of hook-nosed pig of the sea. They are called horseheads also due to their long noses. A male seal’s nose is generally longer than a females. This seal has large eyes, whiskers like a cat and pointed teeth. This particular feature is one of the main differences between grey seals and harbor seals, a close relative.

Seals are able to close their ears and their nostrils. This allows them to spend long periods of time in the ocean water looking for prey or traveling to their next destination.

A group of seals is sometimes called a herd or colony. These seals live in large groups during the breeding season and travel in smaller groups during the rest of the year. The largest colony on record is located on Sable Island near Nova Scotia and contains 100,000 grey seals that travel there to breed.

These seals make their home on many coasts throughout the world. Some live on the coasts of eastern Canada down to New England shorelines. Other grey seals live on coasts of the United Kingdom, Ireland, the Faroe Islands, Norway, Iceland and in northwestern Russia. There is also a smaller group of grey seals living on the coast of the Baltic sea.

Grey seals live on coastlines, but the specific terrain can vary in different areas. These seals inhabit coastlines with a rocky terrain, icebergs, sandbars and islands. Its thick fur protects it from the cold sometimes arctic temperatures in which it lives.

Harbor seals have been seen living in the same area as grey seals. These two seals share many of the same characteristics and are certainly similar in appearance.

What do grey seals eat? Scientists have found that gray seals eat at least 29 species of fish including mackerel, squid, cod, capelin, sand eels and herring. They usually dive down about 200 to 230 feet to hunt for fish, but they can swim to lower depths if necessary. Seals need to eat about 30 to 50 pounds of food almost every day, but they fast (don’t eat) during the breeding season. A pile of fish adding up to 50 pounds weighs about half as much as the average toilet.

Though grey seals can swim at speeds up to 25 mph, they still have predators in the ocean. Orcas (also known as killer whales) and sharks have been known to prey on these seals. A group of Orcas may approach a grey seal resting on an ice floe and create a wave, quickly tipping the seal into the water.

Humans are a threat to these seals as well. Chemicals such as oil and gas dumped into the ocean gets into fish that serve as a food source for grey seals. When the seals eat the fish, they take in these chemicals and it can result in health problems. Also, they can get tangled up in fishing nets or trawls attached to boats. If this happens, they may not be able to escape to get up to the surface to get a breath.

Of course, a person is at risk when they approach a grey seal to feed it. Like any animal, a seal’s reaction can be unpredictable. In addition, feeding grey seals makes them more likely to look to humans for food. This puts them at risk for being mistreated or fed items that will make them sick. Plus, they may venture too close to boats in order to get food and suffer injury as a result.

A grey seal is one of many marine animals protected by the Marine Mammal Protection Act. There’s been a decrease in commercial hunting for grey seals giving them a conservation status of Least Concern which means they are not considered to be a threatened animal. Also, their population is said to be increasing.

A male grey seal called a bull, fights other males when looking for a female, or cow, during breeding season. Males are often injured and take on scars during this season of the year. Males and females mate with several different partners throughout their lives.

The gestation period of a grey seal is 11 months. A harbor seal has a gestation period of about the same length. A female grey seal living on the Baltic coast will usually give birth in March while a female living on the western Atlantic coast gives birth anywhere from December to February. Females on the eastern coast of the Atlantic give birth somewhere between September and November.

A grey seal gives live birth to one baby or pup. A newborn pup weighs around 35 pounds or about the size of two and a half bowling balls!

A seal pup nurses for about three weeks receiving high fat milk from its mother in order to develop a thick layer of blubber. A baby seal is born with a coat of white fur designed to absorb heat to keep it warm as it develops blubber. At the pup’s fourth week of life, it is weaned by its mother. The mother seal forages for small fish to give to the pup but doesn’t eat anything herself. A grey seal pup has a unique cry that lets its mom know where it is on a crowded beach. Some scientists say this cry sounds like a human baby’s cry.

As the seal pup turns six weeks old, she leaves it survive on its own. A healthy six-week-old pup will stay with the herd a couple more weeks, then begin to hunt on its own in the ocean.

A male grey seal’s lifespan can be up to 25 years while a female can live to be 35 years old. Of course, the threat of fishing nets, water pollution and natural predators’ factor into the lifespan of a grey seal. The oldest grey seal lived to be 46 years old in the wild!

The population of the grey seal is increasing. It’s conservation status is Least Concern, so it is not recognized as a threatened animal according to its population totals.

• There are approximately 150,000 grey seals on the western Atlantic coasts.

• The Baltic coast has a population of about 7,500 seals Click through all of our Grey Seal images in the gallery. 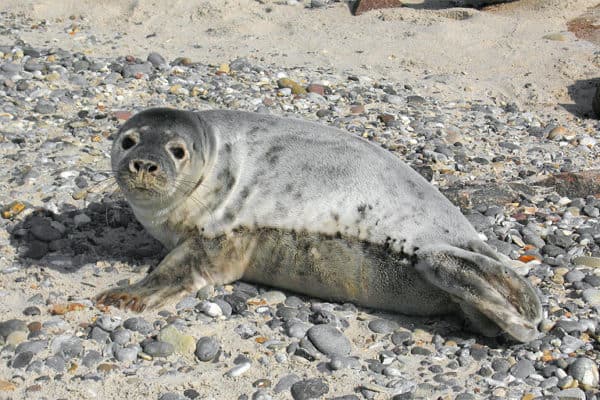 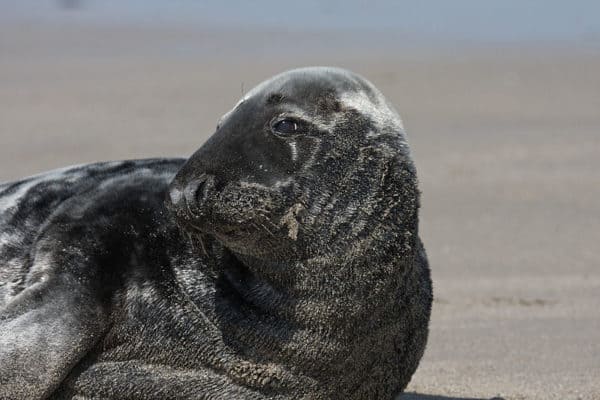 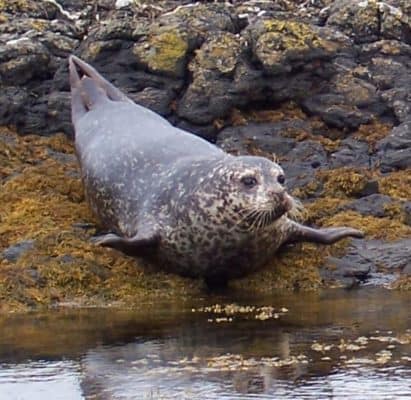 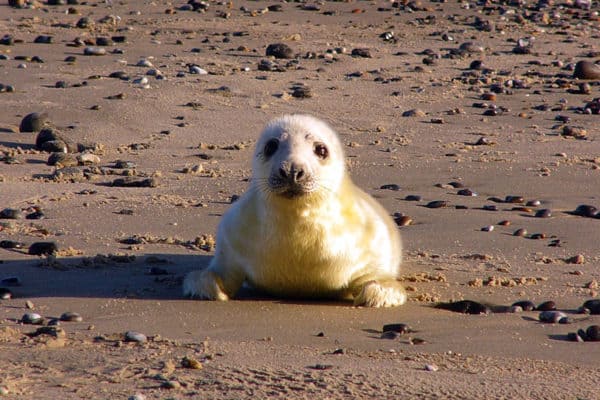 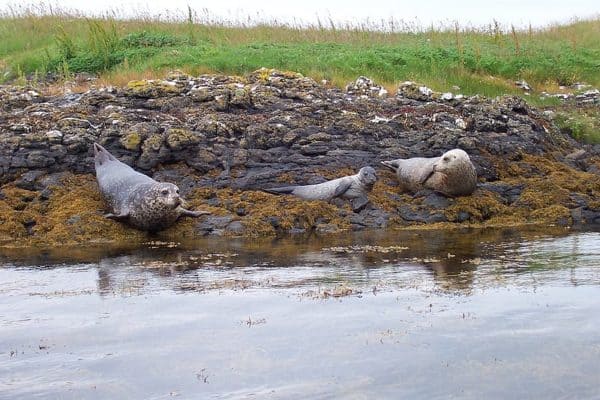 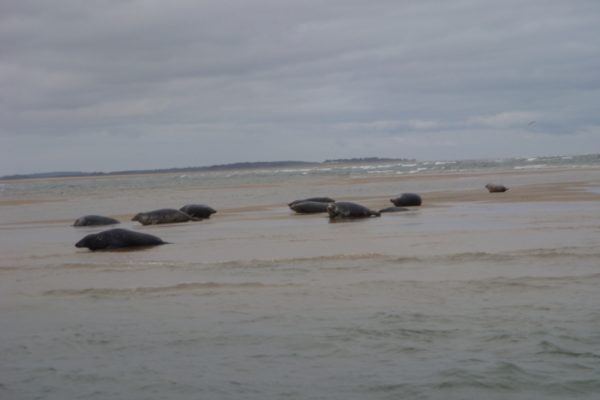 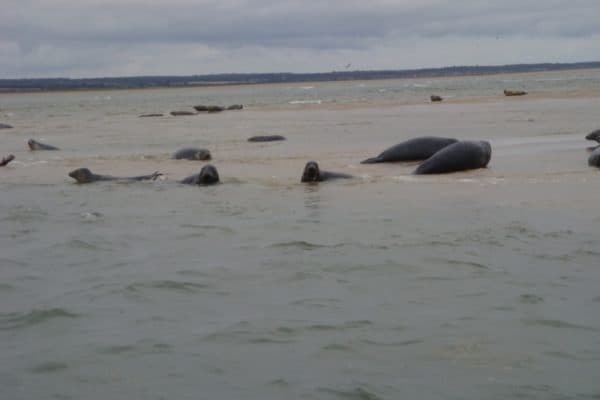 View all of the Grey Seal images!

Is this seal a herbivore, omnivore or carnivore?

A grey seal is a carnivore. In fact, it’s the biggest carnivore in the United Kingdom. This seal eats many types of fish including mackerel, herring, flatfish and cod. Also, they have been known to eat squid, lobsters, octopus and even a few types of seabirds. In addition to those animals, a grey seal may eat a harbor seal, or a porpoise using its powerful jaws to capture and eat this larger prey. These seals wouldn’t be able to sustain a necessary layer of blubber by eating plant life. They need to maintain this layer of blubber for warmth to survive in a cold environment.

What is the difference between a grey seal and a harbor seal?

Grey seals and harbor seals are closely related but there are some differences worth pointing out. For one, male and female harbor or common seals are about the same size whereas male grey seals are larger than females. Grey seals have long noses while harbor seals have a head that’s round in shape. A grey seal’s coat has lots of spots of different shapes while a harbor seal’s coat has spots of about the same size. Grey seals are very vocal marine mammals. They hoot, cry, howl and more. Alternatively, harbor seals make relatively little noise.Harbor seals give birth during the period between June and July whereas grey seals give birth somewhere between September and December. Harbor seal pups can swim from birth alongside their mothers while grey seal pups don’t swim until they lose their white baby coat and grow their adult grey fur.

Though grey seals are especially playful and curious they should be considered dangerous. They have strong jaws, sharp teeth and are extremely large in size. These seals are especially dangerous during breeding season or if there are seal pups around. Like other wild animals, they are unpredictable and should be observed by humans at a very safe distance.

What Kingdom do Grey Seals belong to?

What phylum do Grey Seals belong to?

What class do Grey Seals belong to?

What family do Grey Seals belong to?

What order do Grey Seals belong to?

What genus do Grey Seals belong to?

What type of covering do Grey Seals have?

In what type of habitat do Grey Seals live?

What is the main prey for Grey Seals?

What are some predators of Grey Seals?

Predators of Grey Seals include humans, sharks, and killer whales.

What is the average litter size for a Grey Seal?

The average litter size for a Grey Seal is 1.

What is an interesting fact about Grey Seals?

Grey Seals are one of the rarest species of seal on Earth.

What is the scientific name for the Grey Seal?

The scientific name for the Grey Seal is Halichoerus Grypus.

What is the lifespan of a Grey Seal?

What is the lifespan of a Grey Seal?