The frog's ears are underdeveloped, and if it hears it probably does so through its lungs. 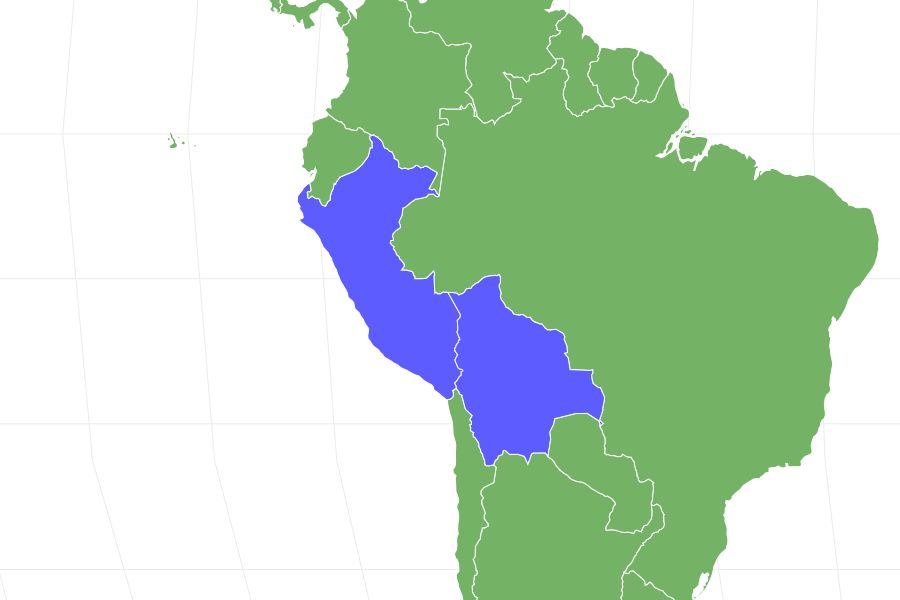 View all of the Scrotum Frog images!

First, you will want to know how this frog got its nickname. The scrotum frog gets this name because it has many folds of wrinkly skin, like a part of the male anatomy. But all this skin serves a purpose. The folds are adaptations that allow the frog to get oxygen without having to come to the surface to breathe. The scrotum frog is a large and endangered frog endemic to Peru’s Lake Titicaca and the smaller lakes and rivers that feed into it.

Here’s a list of five facts about the scrotum frog:

The scientific name of the rare scrotum frog is Telmatobius culeus. Telmatobius comes from the Greek word telma, which means “pond,” and culeus is Latin for “sack,” which refers to the frog’s baggy skin. There are only one species of this frog, but there are variations on the “standard” frog. These frogs live in the rivers and the lakes that feed Lake Titicaca.

The size of the rare Lake Titicaca frog is the second thing people notice about it. It can be eight inches from nose to vent with legs as long as 16 inches. These legs, which are roasted and grilled for food, are a reason why the animal is endangered. A large specimen can weigh as much as two pounds, though most frogs are smaller than this. Females are larger than males.

Besides the saggy skin that gives it its epithet of culeus, the frog also has a hard shield on its back called a dorsal shield. The head is huge and flat, the snout round, the eyes big, round and stary. The skin can be shades of brown, gray, black, or shades of green above. The underparts are pale. The skin can also be spotted or marbled. Only the toes on the hind legs are webbed.

Scrotum frogs are solitary animals and spend all of their lives in the waters of Lake Titicaca, its feeder tributaries, or lakes that are connected to it such as Lake Arapa. It tries to stay in areas of the lake that are between 46.5 and 63.5 degrees Fahrenheit. If it’s colder than it likes, the frog will bask in the sun. Interestingly, it won’t come out of the water to bask but rest on a submerged rock that’s in sunlight. This frog is nocturnal and most of the tasks of life happen at night.

Like other frogs, Telmatobius culeus is an amphibian, but the many folds of its skin are adaptations that act as gills. Because of these adaptations, the frog doesn’t need to come up for air. However, if the oxygen in the water is low, it pokes its snout into the air and lets air flow into its lungs. It will stay this way until the oxygen levels are replenished. If it can’t reach the surface, it stands on the bottom of the lake with its legs splayed and pushes up every few seconds to let itself be raised by the water column. When it sinks, it lets the skin folds ripple, which allows the frog to get some oxygen and expel carbon dioxide. The frog can only do this for a few hours before it dies.

Scientists do not know if the scrotum frog can hear. Its call is so weak that it can only be heard by an underwater microphone placed nearby. Like most other frogs, the scrotum frog most likely calls to attract mates or warn off competitors.

The habitat of this big frog is the cool, well-oxygenated water of Lake Titicaca. At 12,507 feet, it is the highest lake in the world that can be easily navigated. It was designated as a Ramsar site in 1998, which means it’s a wetland of international import. The lake is fed by 27 rivers and is connected to several smaller lakes. The bad news for Telmatobius culeus and other amphibians, reptiles, birds, and other animals that live in and around the lake is that its water levels are dropping and pollution is increasing. Non-native species are also being introduced into the lake.

Because the scrotum frog is fully aquatic, its diet is made up of small aquatic animals. Most of the diet is made up of freshwater snails, amphipods, copepods, aquatic worms, and insect larvae. They also eat tiny crustaceans called water fleas, fish, and, once in a while, smaller members of their species.

Scientists don’t know what the natural predators of this big frog are, but they know that introduced species of rainbow trout eat their tadpoles. Humans also capture the frog for food, the pet trade, and traditional medicines.

The frog’s numbers have also been badly affected by pollution, including runoff from agriculture and mining. The nutrients from fertilizers encourage algal blooms in the water, which strip it of oxygen and cause frogs to suffocate. Human sewage has also sullied the waters of the Lake Titicaca basin. Scrotum frogs are also subject to Chytridiomycosis, a deadly fungal disease of amphibians.

What eats the Scrotum Frog?

Scrotum frog tadpoles are eaten by grown frogs, sometimes. Tadpoles are also eaten in great numbers by rainbow trout, a non-native species that was introduced into Lake Titicaca. The grown frogs are probably camouflaged in some part by their coloration, and even if caught they release a nasty, milky secretion that a predator would find off-putting.

The frog is allegedly served as a delicacy to tourists, and it may even be drunk in a smoothie to increase virility. However, some natives believe the frog is unpalatable.

What does the Scrotum Frog eat?

The frog east aquatic animals such as fish, snails, water fleas, and amphipods.

Biologists don’t know much about the reproduction of the Lake Titicaca frog, but they know that they reproduce sexually, and they breed in the summer. Frogs live in the deeper part of the lake, but they come to the coast to breed. Eggs are fertilized externally as the male holds on to the female, and they release eggs and sperm into the water. A female scrotum frog can lay as many as 500 eggs. Some biologists believe that the parents do not guard the eggs after they’re fertilized, while others believe that the male guards them until they hatch, which is one or two weeks.

After the eggs hatch, it can take as long as a year for the tadpole to develop into a frog. During that time, the tadpole lives in the shallow water at the lakeshore. It takes about three years before a scrotum frog reaches maturity. They’re not ready to reproduce themselves until they’re about five, but they can live as long as 15 years.

Pollution, hunting for food, leather, and the pet trade and invasive species have decimated the population of the Lake Titicaca frog. There may be as few as 45 frogs in the wild, and it is now endangered, maybe critically so. The good news is that conservation efforts are being made to support the frog, and it is now displayed in zoos such as England’s Chester Zoo.

Scrotum frogs are carnivores that eat aquatic animals such as water fleas and insect larvae that live in the water.

What is a scrotum frog?

The scrotum frog is a big frog that lives in the waters of the Lake Titicaca basin between Bolivia and Peru.

Why is it called the scrotum frog?

It gets that name because it has an excess of skin over its body that reminds some people of certain male body parts.

Why is the scrotum Frog referred to as the Lake Titicaca Frog?

Why are scrotum frogs endangered?

The frogs are endangered due to pollution, overhunting, and predation by invasive species. Diseases also strike these fascinating amphibians.

What does the Lake Titicaca frog eat?