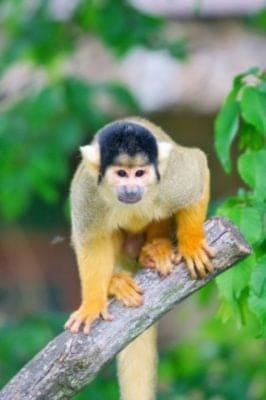 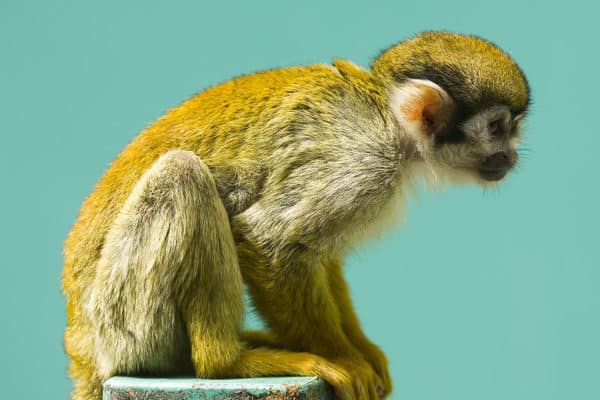 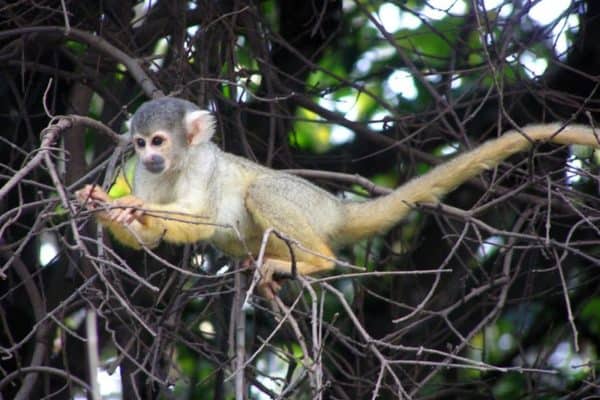 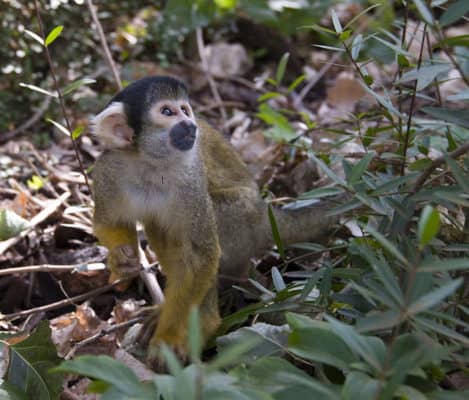 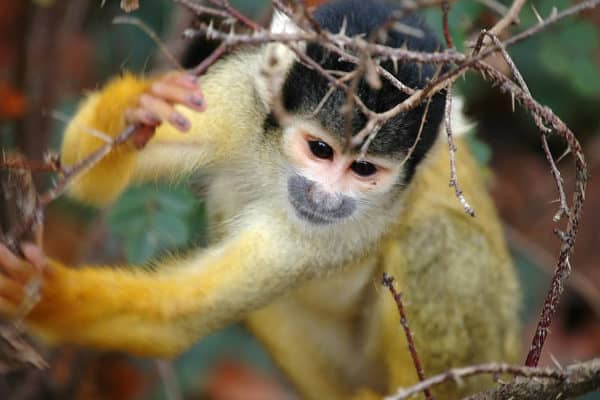 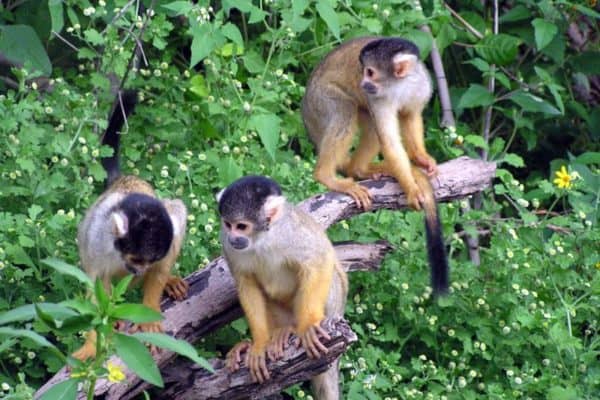 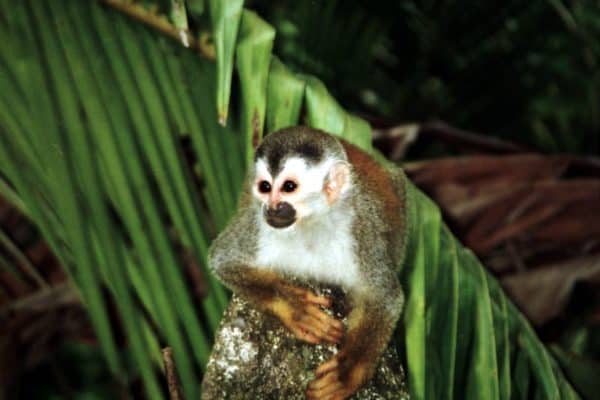 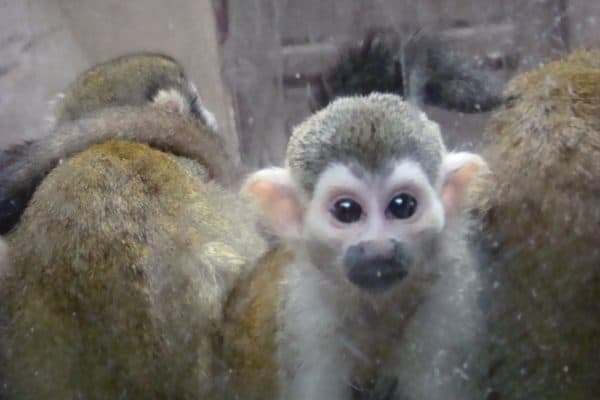 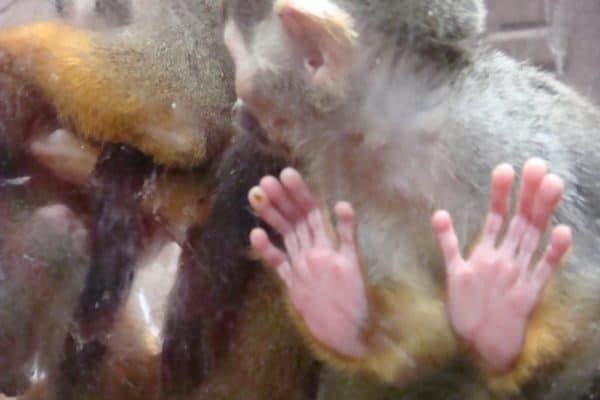 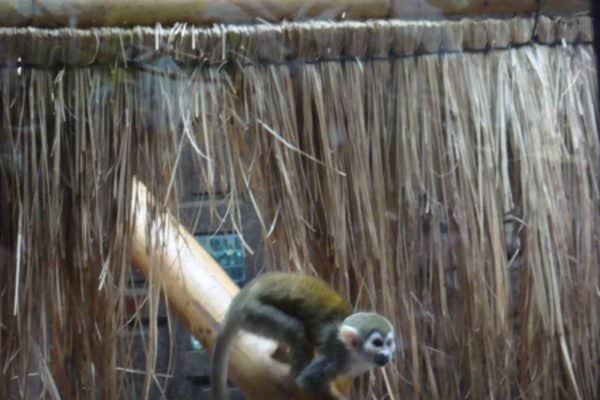 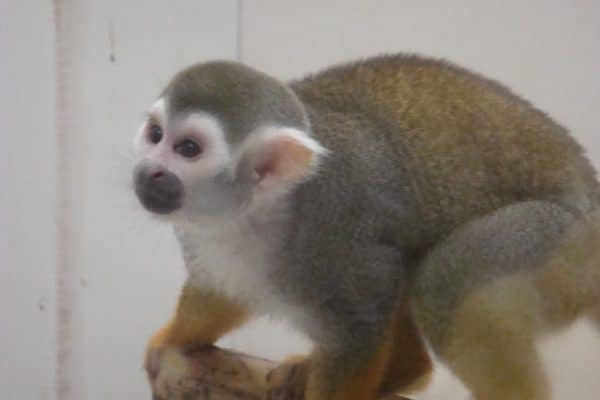 Lives in groups of up to 500 individuals!

Although both male and female Squirrel Monkeys appear to be almost identical in size and appearance, males actually tend to be slightly larger and heavier than their female counterparts. Squirrel Monkeys have very distinctively coloured, short fur which is mostly olive or grey in colour with the exception of their bright yellow legs and white face. The Squirrel Monkey also has a tuft of longer and darker hair on its forehead and a black or dark brown muzzle. The Squirrel Monkey spends a great deal of time high in the trees and is very well adapted to doing so with incredibly dexterous fingers that are not only great for gripping onto branches, but also come in very useful when opening fruits and holding onto prey. The long tail of the Squirrel Monkey is longer than its body and is quite slim ending in a dark, bushy tip.

The five different species of Squirrel Monkey are found distributed throughout Central America and into South America as far as the upper Amazon Basin. Squirrel Monkeys tend to prefer regions of dense, tropical forest that is close to a stream or other flowing water source which is thought to be for safety. Most active during the day, Squirrel Monkeys are found at the middle level of the forest canopy and will rarely venture towards the top as they are in danger of being caught by birds, or down to the ground in fear of other predators. Squirrel Monkeys can however, be found in a variety of forest types and have even been known to inhabit areas that have been cleared for agriculture. They are under threat though from habitat loss that is primarily in the form of deforestation for agriculture and growing Human settlements.

Squirrel Monkeys are incredibly sociable animals that move about noisily in the trees in large troops that are usually 40 or 50 animals strong, but can contain up to 500 individuals. Squirrel Monkey troops usually contain a number of sub-groups including adult males, pregnant females, females with their young, and groups of young Squirrel Monkeys. They communicate between one another using a range of different noises with these complex social troops sleeping together at night before breaking up into their sub-groups to feed during the day. Squirrel Monkeys are excellent at climbing and leap between branches to travel through the forest. Their long tail provides them with excellent balance and aided by their nimble hands and feet, allows Squirrel Monkeys to cover vast areas of the jungle. They are also known to follow other troops at a distance to take advantage of the food left in their path.

At the start of the breeding season, the shoulders of male Squirrel Monkeys broaden and they begin to fight aggressively for their right to mate, with the winner earning mating rights with the most females. Shortly after giving birth, the female Squirrel Monkey will chase away the male who plays no part in raising the single infant and leaves to join his all-male group. Squirrel Monkey births tend to occur during a short period of time which corresponds with the heaviest annual rainfall between June and August. After a gestation period that lasts for around five months, the female Squirrel Monkey begins to carry her young on her back from the first day. By the time the infant is two months old, it begins to explore more without its mother and is almost completely independent by the time it is 10 months old. Young females may stay with or close to their mother for some time but male Squirrel Monkeys will leave her to join a young all-male group.

The Squirrel Monkey is an omnivorous animal that eats both small animals, plants and plant matter in order to survive, feeding during the day in their smaller sub-groups. Squirrel Monkeys have a widely varied diet that is primarily comprised of fruits and insects. They are also known to eat flowers, buds, eggs, nuts, lizards and other small vertebrates that are found amongst the surrounding leaves and branches. The hands and fingers of the Squirrel Monkey are perfectly designed for holding onto food whilst either peeling it or eating it, which it does using its small but sharp teeth. However, in areas that have been more effected by deforestation, Squirrel Monkeys have been known to raid agricultural plantations in search of food.

The Squirrel Monkey uses a number of vocal calls to communicate with the rest of the troop including having special warning sounds which indicate the presence of a dangerous predator. The Squirrel Monkey is one of the smallest species of New World Monkeys and is therefore preyed upon by a variety of forest animals. Birds of Prey are the biggest threat to the Squirrel Monkey along with Snakes that hunt them in the trees. Due to the fact that habitat loss has forced Squirrel Monkeys in some areas to eat crops, they are threatened by methods used to try and keep them away. The fact that Squirrel Monkeys inhabit the jungle in enormous troops means that they have also been severely effected by decrease of forest as there is not enough food to sustain the whole troop.

Due to the small size and highly intelligent nature of the Squirrel Monkey, they have been captured and kept as pets in both their native regions and around the world. Although the majority of Squirrel Monkey pets are today bred from captive animals, the capture of them in the past for the exotic pet trade has had an effect on wild populations, particularly in certain areas. The Squirrel Monkey is today however, more threatened by increasing levels of Human activity in their native regions particularly in the form of deforestation for logging and land clearance for agriculture.

Today, the Squirrel Monkey is an animal species that is at a lower risk in its natural environment than a number of other New World Monkey species. However, two out of the five Squirrel Monkey species are listed as Vulnerable by the IUCN and two are listed as being of Least Concern. Population numbers of all five species though are threatened by habitat loss, with their large troops being pushed into smaller and smaller areas of their natural habitat.

How to say Squirrel Monkey in ...