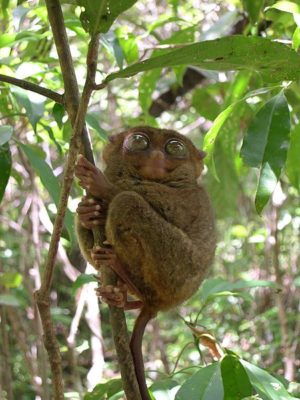 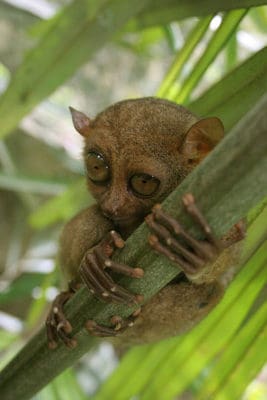 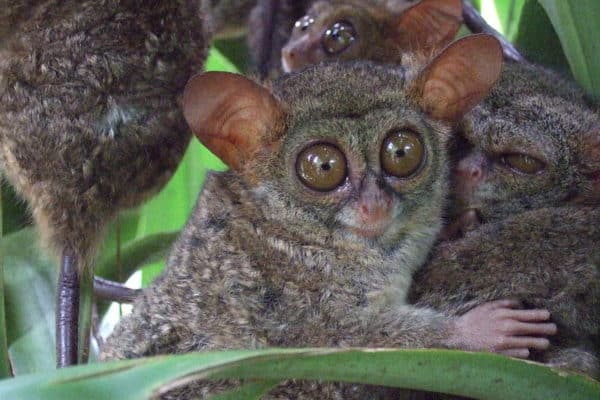 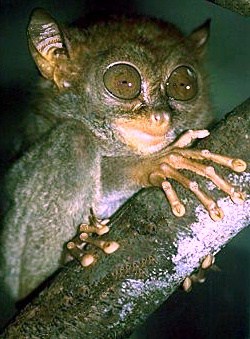 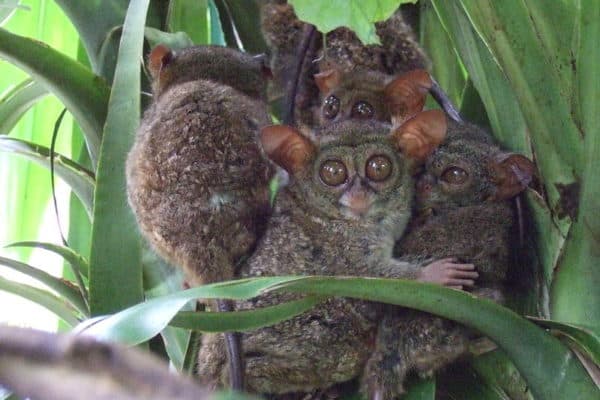 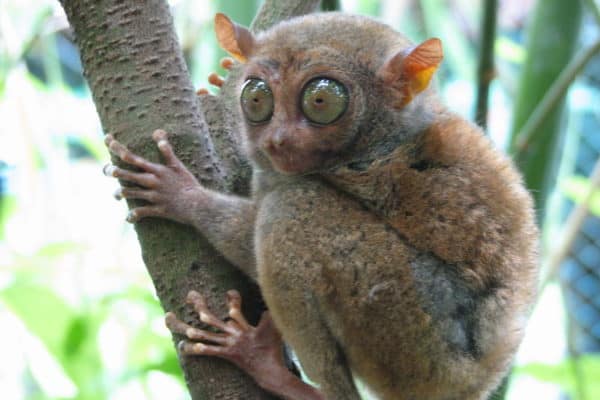 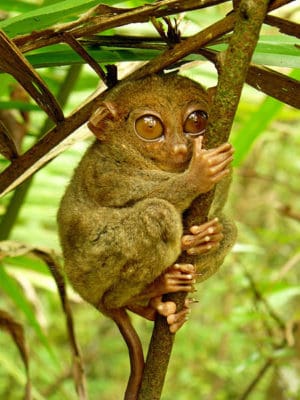 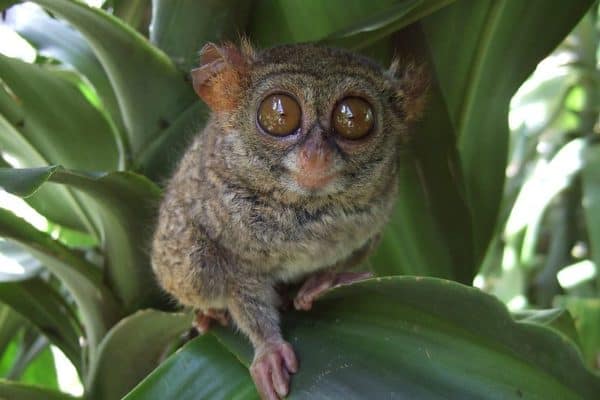 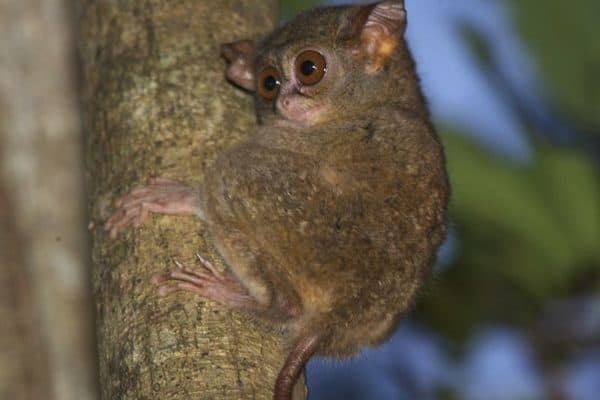 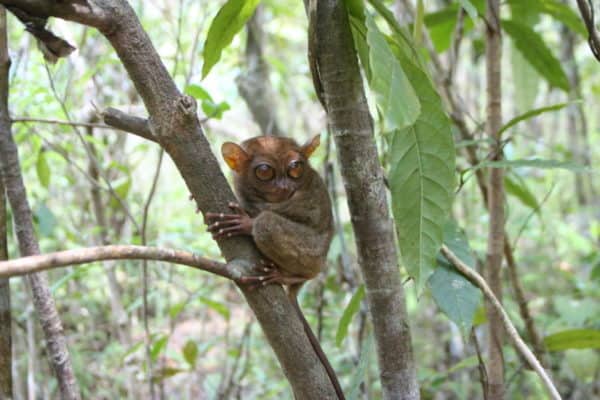 Each eye weighs more than their whole brain!

The Tarsier is a small species of primate that is found inhabiting the well-vegetated forests on a number of islands in south-east Asia. Although fossil records show that Tarsiers would have once been found in mainland Asia, Europe, North America and in Africa, modern Tarsiers are today restricted to just a handful of islands in Malaysia, Indonesia and the southern Philippines. Despite constant debate amongst scientists over the naming and classification of Tarsier species, in 2011 there were 18 different sub-species of Tarsier described that are split into three groups generally depending on their geographic location, which are Western Tarsiers, Eastern Tarsiers and Philippine Tarsiers. Although science is slowly discovering more and more about Tarsiers in the wild, data can be hard to collect due to their shy and elusive nature and coupled with the constant confusion over the classification of separate species, makes conservation efforts difficult.

The Tarsier is a unique and distinctive looking animal that has evolved a number of specific features to aid its nocturnal and arboreal lifestyle. Although the exact appearance of the Tarsier may vary slightly between species, all are relatively similar with a small, stocky body and long tail that is either sparsely covered in fur or has a tuft at the end. Their immensely soft fur varies from grey, to brown or ochre in colour depending on the species, but all Tarsiers share the characteristic long hind legs which enable them to leap distances of up to 5 meters between branches. The long fingers and toes of the Tarsier are tipped with pads and have nails to help them grip onto branches and prey, with long, curved claws on their second and third digits which are used for grooming. The most distinctive features of the Tarsier though can be found on their heads which (thanks to specially adapted vertebrae) are able to turn 180 degrees in both directions so that this primate can see behind it without moving its body. Their enormous eyes can be up to 16mm across and enable the Tarsier to hunt for prey and watch out for predators in the dark. Tarsiers also have large bat-like ears which are incredibly sensitive to detect even the slightest sounds close-by.

Although they were once found around the world, today Tarsiers are restricted to a number of islands in south-east Asia. Western Tarsiers are generally found in lowland primary forests or low mountain forests on the islands of Borneo, Sumatra, Bangka, Belitung, Kalimanta and small surrounding islands. Eastern Tarsiers can only be found on Sulawesi and the surrounding islands but seem to be more adaptable to habitats at different levels of forest, with the exception of the Pygmy Tarsier which is restricted to very high mountainous forest. Philippine Tarsiers tend to prefer lowland forests and are distributed across a number of islands in the southern Philippines including Bohol, Samar, Leyte and Mindanao. Despite there being limited information about the distribution of a number of sub-species in particular, the general population trend is thought to be declining primarily due to habitat loss and fragmentation of such small and unique island eco-systems.

Until recently it was thought that all Tarsier species were solitary however, recent research has shown that social behaviour varies between the different species with Eastern Tarsiers being the most sociable and spending time in groups of two or three individuals where Western Tarsiers appear to be more solitary, only coming together to mate. Tarsiers spend most of their lives clinging to vertical tree branches where they rest during the day. They are however, incredibly unique amongst primates as Tarsiers do not climb or move about in search of food and instead cling onto a tree branch where they are able to turn their heads dramatically to survey their surroundings. They then use their incredibly powerful, long hind legs to help them to leap to another branch or to pounce on prey with their padded fingertips and claws providing them with essential grip when landing. Tarsiers are also relatively vocal animals and although the number and frequency of calls depends on the species, it is often the easiest way to identify one Tarsier sub-species from another, with different vocalisations being used for different situations.

Besides one species of Eastern Tarsier (the Spectral Tarsier) which tends to have more specific breeding seasons between April and May, and then October and November, Tarsiers tend to breed all year round with females giving birth to a single baby after a gestation period that lasts for about six months. Baby Tarsiers are very well developed and are born with a full coat of fur along with open eyes, and are able to climb at just a day old. The female Tarsier suckles her young for around two months when the infant begins eating an adult diet (some individuals are known to be able to hunt independently of their mother before they are even a month old). Tarsier infants are carried around in their mother's mouth or cling onto her fur. Once they are able to hunt on their own, young Tarsiers leave their mother to establish a territory of their own and are usually able to reproduce themselves by the time they are between one and two years old. The life span of Tarsiers depends on the species with Philippine Tarsiers thought to get to around 20 years old, where the Western and Eastern Tarsiers can be 15 years and 12 years respectively.

The Tarsier is a unique animal as they are the only completely carnivorous primates in the world. Under the cover of night, Tarsiers sit clinging to vertical branches where they wait motionless and survey their surrounds 180 degrees each way watching closely with their huge eyes and picking up on even the tiniest noise with their incredibly sensitive hearing. Once food has been located, the Tarsier moves slightly closer to it before leaping onto it and catching it with its front hands. The long fingers and toes of the Tarsier enable it to also trap flying prey mid-air and provide an almost cage-like device to prevent it from escaping before the Tarsier has killed it. Insects make up the bulk of a Tarsier's diet along with small vertebrates such as frogs, lizards and small birds. Some Tarsier species are even known to hunt poisonous snakes and are able to actually catch small bats in the air. Tarsiers hold their prey in their front hands to eat it using their strong jaws and teeth, and are known to have wide mouths for their small size to enable them to consume larger prey.

Due to the small size of the Tarsier, they are preyed upon by numerous animal species in the surrounding forest including cats, birds of prey, large snakes and small carnivores depending on the region in which they live. Tarsiers are able to keenly sense the presence of a potential predator and often use their strong hind legs to leap to a safer branch. However, the remaining Tarsier populations are at a greater risk from people than anything else, primarily in the form of the degradation and fragmentation of their habitats. Forest clearance throughout much of their natural range for agriculture (such as palm oil and plantations), mining and land clearance for livestock grazing has led to drastic declines in their population numbers. They are also often captured for the exotic pet trade but many die within a matter of days due to the lack of live food available or suitable sleeping sites.

The Tarsier has an unusually long anklebone which enables it to jump distances more than 40 times its own body length. The bones are known as the Tarsals which is where the Tarsier gets its name. The Tarsier is one of the most unique primates on the planet and they are also known to have the largest eyes of any mammal in relation to their body size (each eye is actually heavier than its brain). This extends further to their young with females known to give birth to the largest babies in relation to their adult size. The Tarsier is known to be quite unique geographically due to its distribution across Wallace's Line. Wallace's Line runs south between Borneo and Sulawesi and separates the evolutionary centres of the animals found in Eurasia and Australia. Generally, animal species tend to be found on only one side of Wallace's Line but the Tarsier is found on both. It is thought that Tarsiers have inhabited this area of the world for at least 40 million years.

The Tarsier is an incredibly elusive animal that is known to be particularly shy around Humans. With increasing Human activity in areas throughout much of their natural range, Tarsiers are being pushed into smaller and more isolated pockets of their once extensive and rich habitats. They are also not known to be particularly adaptable to areas of degraded forest often due to a lack of abundance of food and trees where they can not only sleep but also sit and lookout for prey or potential predators. A possible factor for the drastically declining populations of the Siau Island Tarsier is that it has been known for local people to hunt them for food, which along with their very restricted range on their island has led to them being classed as of the 25 most endangered primates in the world.

Today, many of the different Tarsier species are either listed as being Endangered or Vulnerable by the IUCN with a number (including the Siau Island Tarsier) being listed as being Critically Endangered in the their natural habitats. Some species are listed as Data Deficient by the IUCN due to a lack of information about their status in the wild. Although conservation work particularly of the Philippine Tarsier is striving to protect these animals and their remaining pockets of primary forest, they remain threatened by loss of habitat throughout much of their natural range. Captive breeding programmes are quite unsuccessful as only around 50% of Tarsiers captured are said to survive in their new homes generally due to a lack of live food and there is also a high infant mortality rate along with a slow reproduction rate of individuals kept in zoos.