Are There Monkeys In Hawaii?

Written by Janet F. Murray
Published: September 22, 2022
© iStock.com/AlexeyKamenskiy
Share this post on:
More Great Content:
9 Monkey Breeds That People Keep as…
Not My Circus, Not My Monkeys: Meaning…
The 10 Smallest Monkeys in the World
The World's 10 Largest Monkeys
What Do Monkeys Eat? Their Diet Explained
Baby Monkey: 5 Pictures and 5 Facts

Monkeys thrive on continents and islands across the globe, so it is natural to ask whether there are monkeys in Hawaii. The island looks like it would be a wonderful home to monkey population because of its lush vegetation and forests. Still, the island has no monkeys at all. Let’s find out why.

There Are No Monkeys in Hawaii

Hawaii is not home to any wild monkeys at the moment or in the past. Approximately 2,500 miles of ocean separate the island from the nearest land source, resulting in few land animals being native to the island. However, people did introduce many land animals to Hawaii in the past. For example, in the 1800s and early 1900s, human settlers brought pigs, goats, horses, mongooses, and other animals onto the island. Still, Hawaii is home to two native mammals: the hoary bat and monk seal. The island also has five species of reptiles and amphibians that are indigenous.

Why Are There No Monkeys in Hawaii?

During the Eocene Epoch period, which was 56 to 33.9 million years ago, monkeys lived in North America. During this period, the earth was much warmer, which meant that tropical rainforests covered most of the planet, even Alaska. Researchers have found that monkeys, like the 55-million-year-old Teilhardina magnoliana, an ancestor of the tarsier, used to live in Mississippi.

However, once the Eocene Epoch period ended, the Drake Passage that stretched from Antarctica to South America also disappeared. This disappearance meant that the Pacific and Atlantic Oceans joined. Because of this fusion, colder currents spread across the planet, and the earth’s surface temperature dropped. This massive change caused the Grande Coupure, one of the most significant mass extinction events, leading to the extinction of monkeys in North America.

But during this time, Hawaii did not exist. The Hawaiian Islands are relatively young, being 5.1 to 7 million years old. The island of Kauai is the oldest. Suppose monkeys still lived in North America when Hawaii was formed. In that case, monkeys may have been able to travel to Hawaii via vegetation rafts. Rafting across oceans between continents is quite common for animals, especially after being displaced due to massive weather events. At that time, Africa, South America, and other continents were closer. The trip may not have been easy, but it was shorter, which meant they had a higher likelihood of surviving the voyage.

The Nene, also known as the Hawaiian Goose, is Hawaii’s state bird. Experts believe the Nene evolved from the Canadian goose. However, the Canadian goose probably evolved into a distinct species and is now a Hawaiian native. This goose has a black head with a white and black striped neck. Alternating brown and white feathers cover their bodies. Males and females look alike, except the males are larger. The Hawaiian goose is non-migratory and semi-terrestrial. This behavior means they have less toe webbing compared to other geese. The Nene eat dry grass and native shrubs found in lava fields in the wild. These geese get most of their water intake by consuming berries.

The Hawaiian monk seal is the official mammal of Hawaii. The seal’s native name is Ilio-holo-i-ka-uaua, meaning the dog that runs in rough water. Hawaiian monk seals are native to the island and are endangered. The infants are black, and the adults are usually dark gray or brown. Their bellies are either light gray to yellowish brown. Hawaiian monk seals have marks resembling scars or natural bleach marks on their fur. These seals have a vast diet and are known as generalist feeders. Their diets usually consist of:

The humpback whale is Hawaii’s official aquatic mammal and overall state animal. This choice is no surprise, as the humpback whale has high cultural significance and is one of many Hawaiian emblems. The indigenous Hawaiian people believe that their aumakua or family ancestors take the shape of the humpback whale in their dreams or visions to provide them with guidance. Humpback whales are usually black with white on their pectoral fins, bellies, and tails. The tails of these whales can be up to 18 feet wide, with serrations along the trailing edge. Their tails range in pigmentation and often reflect prominent scars. These gigantic mammals are filter feeders, consuming small crustaceans, mainly krill and small fish.

Hawaii is safe for people as there are not many dangerous or poisonous animals on and around the island. But there are a few animals that humans should avoid. Hawaii is home to sea snakes, like the Yellow-Bellied Sea Snake, that may be dangerous to swimmers. Hawaii’s waters are also home to sharks, like the tiger and the great white sharks. Shark attacks are not common but can often be fatal. What is comforting is that there have only been 11 fatal shark attacks in Hawaii since 1828. Hawaii is also home to the Conus snail, which has a toxin that is deadly for people.

Up Next: More About Monkeys Around the World

Are there monkeys in Hawaii?

Hawaii is not home to any wild monkeys at the moment or in the past. Approximately 2,500 miles of ocean separate the island from the nearest land source, resulting in few land animals being native to the island.

See the Terrifying Scorpion Bigger Than a Grown Man 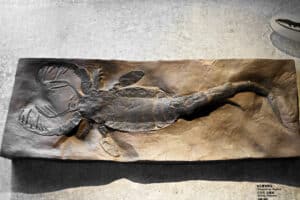