Originally bred to be a companion dog in Tibetan Buddhist lamaseries.

Tibetan Spaniel as a Pet:

Click through all of our Tibetan Spaniel images in the gallery. 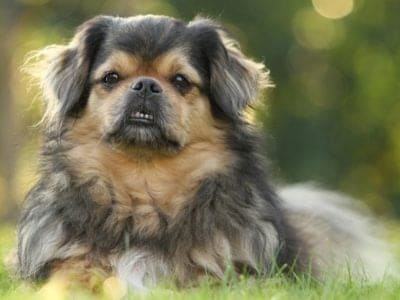 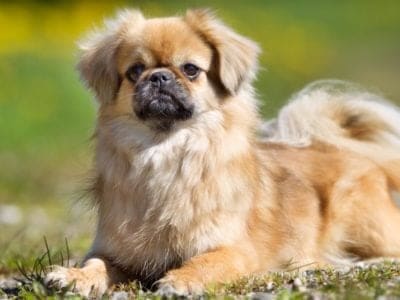 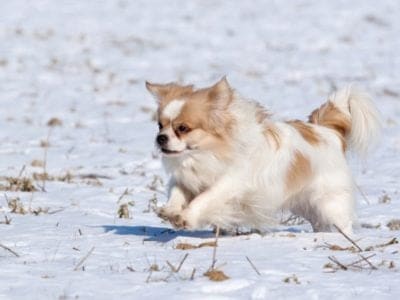 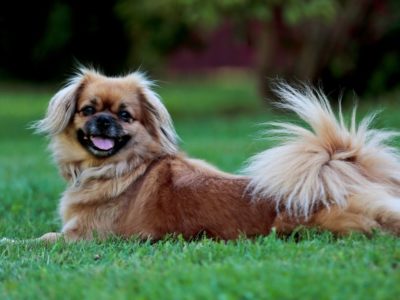 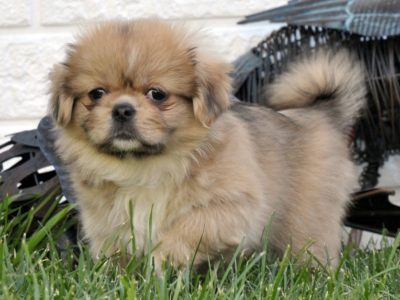 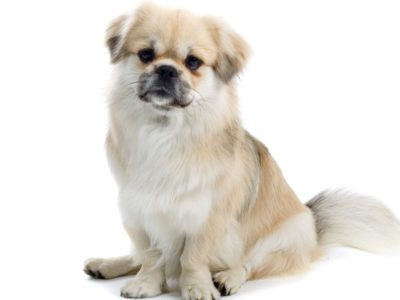 View all of the Tibetan Spaniel images!

Friendly and vocal, the Tibetan Spaniel loves to spend time with his family. This dog is sometimes called a “Tibby,” and the breed was originally bred for Buddhist monks, eventually reaching the US in the 1960s. They prefer to spend time with their family, and they shouldn’t be left alone for long.

The Tibetan Spaniel has a longer face and a less fluffy coat than the Pekingese. They also don’t have extra skin near their eyes as the Pekingese do.

Breeders sometimes mix the genetics of these pups for a different look. However, due to the roots of the Pekingese breed, breeders may have chosen to mix the Tibetan spaniel to ultimately create the former.

Before adding a Tibetan Spaniel to the home, consider a few pros and cons to decide if they are a good match for the household.

The Tibetan Spaniel is a small, non-sporting dog, and there is little difference between females and males in their size. They often weigh 9-15 lbs. and stand 10 inches tall as an adult.

The Tibetan Spaniel has the good fortune of having relatively few health issues, but that doesn’t mean that they are completely safe. Choosing puppies from good breeders will greatly reduce the risk of inherited disease, especially if they’ve been tested. These genes for certain inherited diseases can be tested with a vet.

Health and Entertainment for your Tibetan Spaniel

In the eyes, progressive retinal atrophy is relatively common, causing blindness as the condition progresses. Luckily, a vet can screen for this issue far earlier than when the eyes start to degenerate, giving a better chance of preserving the dog’s vision.

Patellar luxation – which is caused by the misalignment of the kneecap, calf, and thigh bone – is also common, eventually leading to surgery if it is not caught early enough. These dogs may also suffer from deafness (which can be detected from birth), epilepsy, and another eye disease.

Unfortunately, the majority of health issues aren’t fully seen in the pup before they reach adulthood. That’s exactly why breeders should wait until their dogs are at least 2 or 3 years old to breed them. Ultimately, the health issues that most commonly plague the Tibetan spaniel include:

The sweet nature of the Tibetan spaniel makes it the perfect breed for any home with the same environment. These animals love to spend a little extra time with their owners, doing anything to get the snuggles and playtime that comes with human attention. They are incredibly in tune with the emotions of their owners, so it is important to keep a relatively consistent home for good behavior.

These pups like to roam around the home with their active personality, though they don’t need a bunch of space. They are just as happy in a small apartment as they are in a large house, but they’ll need plenty of attention. They like to get up on tops of couches and other areas with a little height to perch, giving them a full view of what’s going on around them.

With consistent training, their intelligence and perception of their owner’s mood help them to maintain relatively good behavior. Their quick learning is a great advantage, though they may not listen to commands when they are feeling more stubborn.

How to Take Care of Tibetan Spaniels

Introducing any new dog into a home – whether from breeders or a rescue – is a challenge. Your home is their home, and the Tibetan Spaniel needs to feel at home. Here are a few ways that you can make your home more welcoming as you take care of your furry friend.

Every dog deserves to have a mix of high-quality dog food, and the Tibetan spaniel is no different. However, their body is relatively small, so they should only need a total of ¾ to 1 cup of food each day. Since their stomach can only take in so much food at once, this total amount should be divided into two meals each day.

The age and size of your particular Tibetan spaniel will determine if he needs more or less of this food. When he’s done with a meal, put away his food dish. Buying high-quality food will ensure that he eats enough without becoming overweight.

Keeping up with a Tibetan spaniel’s grooming is crucial, especially because shedding happens throughout the year for this small dog. It is best to brush their coat weekly to eliminate the dead hair that can get stuck in their coat. However, this dog has a double coat that is incredibly silky, so don’t let the texture fool you – brushing is necessary.

Baths come much less frequently. Unless the dog becomes incredibly dirty, it shouldn’t need to be bathed more than once every 6 to 8 weeks. Brushing their teeth is much more frequent at no less than 2 to 3 times a week, though some owners prefer to brush them every day.

Nail trimming is another “as needed” grooming task, but it is best to do it once or twice monthly. A good rule of thumb is to listen when your dog walks – if you hear their nails, it’s time for a trim. Handling their paws will make your dog less antsy about having them handled during grooming.

The Tibetan Spaniel is easily intimidated by the large size of its owner, so any training should be done at their level. Get down on your knees to be less intimidating and adopt positive reinforcement while training with treats and play. They are sensitive to the mood of their owner, so keep a confident and hopeful demeanor during training to keep them in the same responsive mood.

Though the Tibetan spaniel can be trusted around the home, many owners prefer to housetrain or even crate-train when they are not home to prevent chewing. If you choose to keep your dog in a crate while away, do not keep them in it for long periods or they may become anxious.

As active as the Tibetan spaniel may be, they don’t actually require that much exercise. This pup is just as happy running around an open yard as they are to climb up yet another piece of furniture to sit up tall. They work well in an apartment setting, but they are also excited to jump around all of the space in a massive estate.

Usually, the Tibby is happy to go on a walk up to twice a day to get all of the outdoor activity that they need. As long as they can hold the attention of their owner, they are perfectly happy.

When it comes to time with family, these dogs are all too happy to spend time with their family. They are always ready to cuddle, but they prefer to have someone come up to them at their own height. This might be exactly why young children are such a good companion for them. These pups are incredibly attentive when given the attention they need, but their high sensitivity to emotions can be stressful during tantrums.

As much as this dog loves little ones, they should be supervised. The small physique of the Tibetan spaniel can be hurt unintentionally if they engage in rough play.

Dogs Similar to the Tibetan Spaniel

If a Tibetan spaniel isn’t for you, consider one of these breeds instead.

These dogs are most famous for their use in Tibetan monasteries. However, in pop culture, the Tibetan spaniel is featured in Disney’s Lady and the Tramp. This breed is featured in children’s books as well, though they are much easier to spot in animated films.

Some popular names for these spaniels include:

Absolutely. These dogs love to be around family members, though they will often shy away from strangers and unfamiliar visitors. However, children should be taught the proper way to engage in play with this small dog.

How much does a Tibetan spaniel cost?

Due to the rarity of the Tibetan spaniel, a puppy can cost anywhere from $800 to $3,500. On average, they cost about $1,990. While it is possible to find a puppy from a rescue for much cheaper, it may take a bit of searching. Check out nearby rescue groups for small dogs to increase the chances.

Can Tibetan spaniels be left alone?

Typically, the Tibetan spaniel doesn’t like to be alone for very long. While some owners choose to crate-train their dogs when they will be gone for a while, it is best to not leave them in this small area for excessive periods. These dogs become anxious when left without their owner.

Yes. In fact, the Tibetan spaniel will often cuddle much more than the average dog. They like to spend plenty of time with loved ones.

How do you groom a Tibetan spaniel?

This dog requires weekly brushing, eliminating the mess of the year-round shedding. Furthermore, they should be bathed every 6-8 weeks, and their nails should be trimmed every 2-4 weeks.