Spends most of it's time in the trees! Click through all of our Water Dragon images in the gallery. 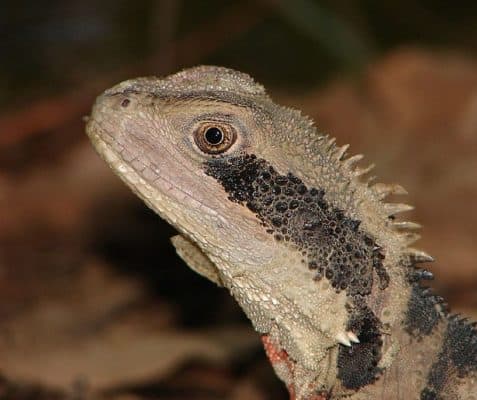 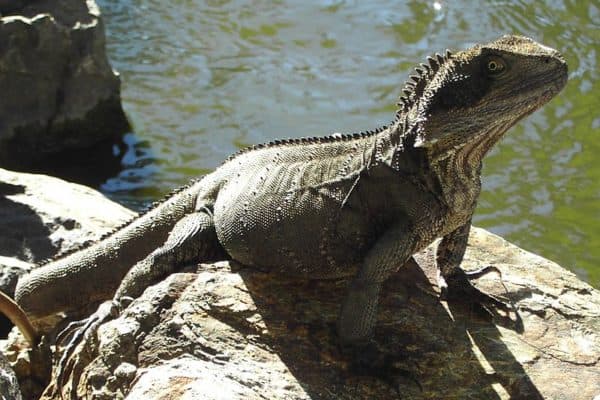 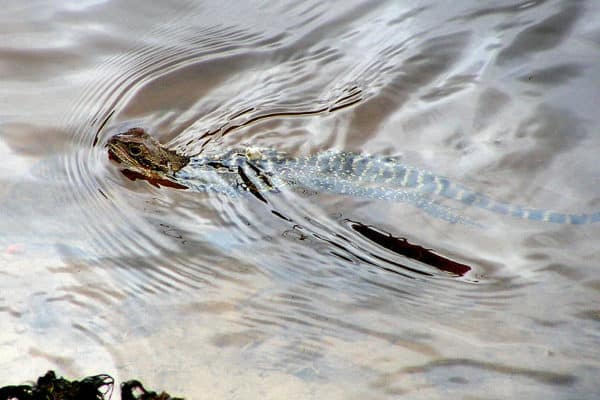 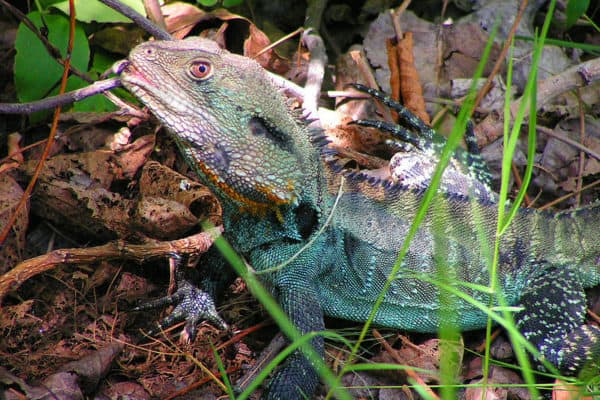 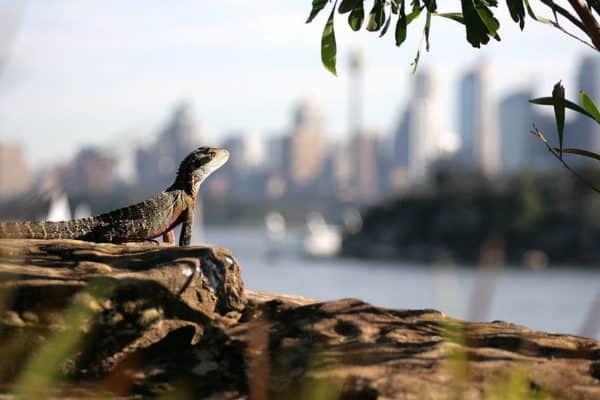 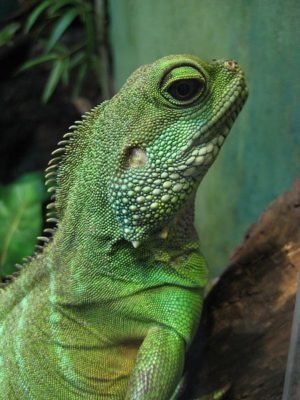 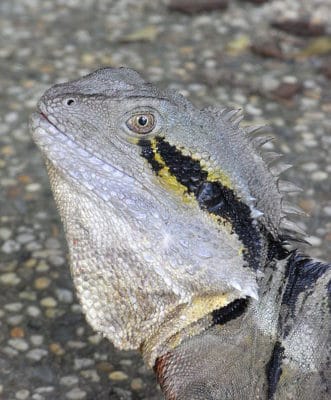 View all of the Water Dragon images!

“Water dragons can run very quickly when threatened and remain submerged for as long as 90 minutes.”

Water dragons are agamid lizards native to southern China, the Southeast Asian countries of Thailand, Cambodia, Vietnam, Laos and Australia. The two main species are the Chinese Water Dragon, along with the Australian Water dragon found on the eastern coast of that continent from Victoria north to Queensland. Australian water dragons are further divided into two subspecies, the Eastern Water Dragon and the Gippsland Water Dragon. All water dragons can run very quickly and will even drop into the water and remain submerged for up to 90 minutes when threatened.

The Chinese Water Dragon is generally a bright to a dark green lizard with high horn scales running from its head to the base of its tail, which has brown and green bands and ends in a point. Some may be purple with an orange stomach and may have diagonal stripes of green or turquoise on their bodies. Their belies can also be white, off-white, light green or yellow. Their throats are considered their most attractive feature, ranging in colors of blue, purple and peach, bright orange and yellow and are sometimes striped between two colors.

Juveniles have brownish green upper bodies and white to pale green underbellies. They also have white or beige vertical stripes on both sides of their bodies along with a brown and green banded tail. After reaching a length of about 10 inches and shedding their skin several times, they take on their adult coloring.

The Asian species has a small, iridescent, photosensitive spot between its eyes referred to as the pineal eye that is believed to thermoregulate its body by sensing differences in light. This parietal eye can also help the lizard avoid predators from above while also allowing it to awaken from a deep sleep suddenly.

Adult males and females exhibit slightly different characteristics. Males have more vivid coloring, especially under the throat, while they also have larger, more triangular heads, bigger jowls with larger crests on the head, neck, and tail, along with larger femoral pores.

Their legs are well developed with five-toed feet that have long, thick claws ending in sharp points. Front legs are slimmer and are used for climbing trees and holding onto branches. The back legs are more muscular and are used for jumping, leaping, climbing, and swimming. These dragons sometimes run bipedally on their back legs.

This species can grow up to just over three feet in length, with the tail taking up about two-thirds of its body length. The tail is used for balance and leverage when climbing and for assistance in swimming, as well as a weapon against predators. The largest water dragons weigh just over two pounds.

Australian water dragons have a similar appearance with a deeply angular head and a dorsal ridge of scales that extends from their heads to their tails. They also have large jowls and ears that are almost as large as their eyes. Colors differ between the subspecies. The Eastern Water Dragon is grey to brownish grey with black stripes on the dorsal ridge down to the tail. They also have a horizontal black stripe running from the eye that extends down the neck. Limbs are primarily black with spots of grey, while the tail has striped with grey and black. The belly is yellow-brown with the chest and upper belly bright red in mature males, and there is no dark stripe from the eye to the ear. Males have bands of blue and yellow around the throat and have dark blue-green chests. Eastern Water Dragons have white, yellow and red throats and dark bands behind its eyes, while Gippsland Water Dragons have dark bands on either side of its throat. Both are light greenish grew in overall color. The Australian species can change its color to camouflage itself slowly. Males are also bolder in color than females.

Both the Asian and Australian species are active during the day and spend most of their time in trees or on plants basking in the sun. When threatened, they can run very fast and will often jump in the water and remain underneath for extended times to avoid predators or hide in thick vegetation. These dragons are generally shy in the wild but can become friendly to humans when kept as pets. Both sexes exhibit aggressive behavior that includes head bobbing and arm waving. Where the population is denser, males become more territorial towards other males and display behaviors such as posturing, chasing and fighting. These animals also communicate through a variety of gestures like saluting and substrate licking, but the meaning of those gestures is not fully understood.

Water dragons in Asia and Australia live near bodies of flowing water such as creeks, rivers, and lakes that have baking sites such as rocks or overhanging branches. Habitats vary widely and include rainforests in hotter areas and alpine streams in more temperate climates. These animals will even live in urban areas if they can find suitable conditions and clean water.

Activity patterns change when the weather cools. During the spring and summer, they engage in typical basking behavior along with swimming and foraging for food. In cooler months, these dragons enter established burrows or create their own near water sources and pack the dirt in the opening to keep themselves warm. Once inside, they will slow their metabolism and enter brumation, a type of hibernation.

In the wild, they can sometimes be difficult to observe as you are more likely to hear them scurrying away or dropping to the water. Australian water dragons often stand perfectly still on their hind legs as their camouflage allows them to blend in with grass and fallen leaves.

These animals are omnivorous, but their diet changes according to their size. Juveniles and yearling eat insects, including ants, crickets, caterpillars, and spiders primarily. Aa they become older and larger, their diet expands to include small rodents such as baby mice, birds, fish and invertebrates along with vegetation and occasional eggs. Mollusks and small crustaceans are also part of their diet. Water dragons’ pointed teeth and sticky tongue help them catch and hold onto their prey. They are also believed to forage for food while underwater.

In captivity, water dragons eat brown crickets, locusts, waxworms, mealworms, and beetle grubs. If you keep them as pets, you can offer green leafy vegetables and small chunks of fruit. Water dragons have a reputation of becoming picky eaters when bored with their food, so it’s essential to provide them with a varied diet.

Snakes, birds, and small mammals are the prime predators of water dragons. In urban areas, domesticated animals such as dogs and cats also prey on them. Australian Water Dragons are prone to becoming roadkill, especially in the summer, as they are attracted to the warm road surface.

Males are sexually mature in the wild at about five years of age, while females can begin laying eggs at about four years. Females usually produce two clutches of eggs per year. Reproduction occurs in the springtime before the weather is warm but not yet hot. Sometimes two males will fight over a female by circling each other and biting at the neck and hip regions for as long as 10 minutes. Males court their mates through physical displays that include head bobbing and then latch onto the crest of the female’s head while mating. Afterward, the female excavates a burrow several inches into the ground where she lays a clutch of six to 18 eggs, which hatch after an incubation period of 60 to 75 days. The sex of water dragons is dependent on the temperature of the nest site.

When the hatchlings emerge, they are usually about one inch wide and five to six inches long. They are fully developed and independent at birth. At first, they stay near the nest and eventually move away, staying away from the general adult water dragon population for a time. Growth is fastest in the first year with juveniles growing about seven-eighths of an inch in length per month.

Chinese Water Dragons have a lifespan of 15 to 20 years, while those in Australia can live up to 20 years.

Water dragons are beautiful pets, but they have specific care needs for heat, humidity and food that you must meet so that they can thrive.

These lizards appear confident and friendly in captivity. However, you should be aware that they can deliver a painful bite.

Yes, they do. It’s essential to handle them in captivity, so they don’t become aggressive when living with other water dragons.

How much do water dragons cost?

Water dragons cost $20 to $80, depending on where you live. The price also differs if the lizard was bred in captivity or wild-caught.

Can water dragons go without food?

Water dragons have plenty of stored fat, so they can go without eating for two months, although if you are keeping them as pets, keeping food from them is not recommended. Growing juveniles must eat often.

How do I know if my water dragons are male or female?

Males have brighter colors than females and have larger heads, jowls and crests on their back and neck.

Water Dragons are Omnivores, meaning they eat both plants and other animals.

What Kingdom do Water Dragons belong to?

What phylum do Water Dragons belong to?

What class do Water Dragons belong to?

What family do Water Dragons belong to?

What order do Water Dragons belong to?

What genus do Water Dragons belong to?

What type of covering do Water Dragons have?

Water Dragons are covered in Scales.

In what type of habitat do Water Dragons live?

What is the main prey for Water Dragons?

What are some predators of Water Dragons?

Predators of Water Dragons include snakes, birds, and mammals.

What is the average clutch size of a Water Dragon?

What is an interesting fact about Water Dragons?

Water Dragons spend most of their time in the trees!

What is the scientific name for the Water Dragon?

The scientific name for the Water Dragon is Physignathus.

What is the lifespan of a Water Dragon?

What is the lifespan of a Water Dragon?

How fast is a Water Dragon?

A Water Dragon can travel at speeds of up to 30 miles per hour.