Macaws are New World parrots which means their natural ranges are in the Americas. Specifically, macaws are found in the Caribbean as well as in Central and South America. Blue macaws historically lived in Brazil, but are blue macaws extinct?

Spix’s little blue macaws are one of the smallest examples of a macaw on the planet. They’re medium in size compared to all other extant parrots.

They’re one of the “four blues” which are blue macaw species associated with each other. This association began when they were put on display in one grouping at the beginning of the 20th century in Berlin.

As their name implies, these little parrots are all blue. While other macaws that are blue exist, the Spix’s little blue macaws are most often referred to as blue macaws. They’re also the smallest macaw that is blue.

It’s not just macaws that are facing extinction. Almost half of all parrot species on earth are in peril with 25% of species being critically endangered. With that being said, are blue macaws extinct?

No, the Spix’s little blue macaws are not extinct.

They were declared extinct in the wild 11 years after the disappearance of the last known living animal. After a 22-year absence from its native habitat, a reintroduction effort has resulted in 8 adults being released into the wild. Another release is planned for the near future.

Continual efforts geared toward the reintroduction of this species will take place during the upcoming decades. Three babies were born in the wild in 2021 which is good news for conservationists. However, this doesn’t guarantee that blue macaws will ever have a stable wild population again.

It’s hard to reintroduce animals to the wild because it takes years to develop the skills of a wild animal. Captive animals don’t have a chance to develop these skills in adolescence. This makes them much more susceptible to natural deaths like predation and starvation.

Should the Spix’s little blue macaw go extinct altogether and vanish from the face of the earth, its genome has been sequenced. This means that it may be up for de-extinction should all hopes of reintroduction vanish.

How Did the Blue Macaw Go Extinct in the Wild?

The Spix’s little blue macaw lives in the same type of vegetation that domesticated animals eat. The introduction of cows and goats to their home region approximately 300 years ago caused a decline in the blue macaw’s numbers.

As domesticated animals eat the natural vegetation, the already arid area undergoes desertification. This means that the habitat isn’t able to regenerate itself and turns into a functional desert devoid of the biodiversity it once had. Introduced animals also fed on eggs and juvenile blue macaws which helped to decimate their population.

Little blue macaws were also harvested for the pet industry. At one point, this harvesting was ferocious enough to help drastically reduce their numbers. They’re desirable birds, both hunted and in captivity, because of their beautiful blue feathers that vary in tonality depending on where on the body it originates.

Where Do Blue Macaws Live?

Blue macaws are endemic to northeastern Brazil in the Rio São Francisco drainage basin. This area is part of a region known as the caatinga which is a wooded desert. These birds specifically live in the creek system that runs through the caatinga.

Their primary habitat is caraibeira trees that grow slowly. Adult trees of this type are up to 300 years old.

The degradation of the blue macaw’s habitat has dramatically reduced the number of these trees while compromising their environment. As a consequence, these trees have not regenerated in over 50 years.

Little blue macaws almost exclusively use these trees as their home and food source. Deforestation and desertification of its natural home range had been going on for a century before it was discovered in the early 1800s. These birds were already rare when people became aware of their existence.

What is a Macaw?

Macaws are true parrots found in the Caribbean, Central America, and South America. There are 19 different macaw species on the planet. The “four blues” of the macaw world are Spix’s macaw, the hyacinth macaw, the glaucous macaw, and Lear’s macaw.

These birds are famous for their ability to vocalize. Because they’re social creatures, they’re capable of complex vocalizations which allow individuals to pick out specific birds from large groups. Because of this, macaws can create human words and some are trained to speak in sentences.

These parrots have strong curved beaks because they feed almost exclusively on hard nuts and seeds. Which nut or seed a specific species eats depends greatly on the immediate environment they occupy.

Macaws are the largest parrot that can fly. While there are other larger parrots in existence, they aren’t capable of taking to the skies.

Macaws are long-lived with many making lifelong pets since they reach up to 60 years of age.

What is a Hyacinth Macaw?

Hyacinth macaws are sometimes called blue macaws. They are the largest macaw species coming in at 39 inches long with an average weight hovering around 3 lbs. Their wingspan reaches up to 4 feet.

They average around $5,000-$12,000 if you attempt to purchase one as a pet because they are extremely rare in captivity. They live to be about 50 years old.

This bird has a larger range than the Spix’s little blue macaw. It is found in various habitats across Central and eastern South America.

This macaw is classified as vulnerable and it’s facing the same problems that the Spix’s little blue macaw is facing. Deforestation and the pet trade pose the biggest risks to its sustainability as a species.

What is a blue macaw?

Macaws are New World parrots which means their natural ranges are in the Americas. Specifically, macaws are found in the Caribbean as well as in Central and South America. Blue macaws historically lived in Brazil.

Spix’s little blue macaws are one of the smallest examples of a macaw on the planet. They’re medium in size compared to all other extant parrots.

No, the Spix’s little blue macaws are not extinct.

The Flag of Honduras: History, Meaning, and Symbolism 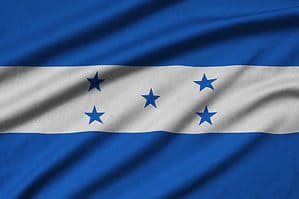