gudfoto/Shutterstock.com
Share this post on:
More Great Content:
Deer Population by State: How Many Deer…
7 Best Ways to Keep Deer Out…
A Curious Deer Accidentally Creates The Most…
The 10 Largest Deer in the World!
What Do White-Tailed Deer Eat? 20+ Foods…
Caribou vs reindeer: 4 Main Differences Explained

Baby deer are some of the most adorable forest creatures on the planet! But did you know that they are 200 times more likely to be born triplets or that they only have 4 teeth when they are born?

Check out this article to learn five deer fawn facts and see some adorable pictures. Let’s jump right in!

#1: Audrey Hepburn Had a Deer Fawn as a Pet!

Audrey Hepburn was a famous actress who starred in movies in the 1950s and beyond. For one of her on-screen roles, she needed to interact with a baby deer. The animal’s trainer had an idea – Audrey should bring the baby deer home with her to create a special bond that would make the scenes with the animal more believable.

Hepburn agreed and took the deer, named Pippin, home from the set. They formed an amazing bond, and Hepburn loved the adorable baby so much, she let her tiny furry friend sleep in her bathtub. On occasion, Hepburn would even let the deer sleep in bed with her, and the deer reportedly loved to cuddle with her human companion.

Unfortunately, there isn’t much information about what happened to Hepburn’s deer friend once the movie was completed. Some speculate that the animal was sent back with its trainer once filming commenced. Others believe that Hepburn may have kept the animal, but noted it would be incredibly difficult to keep a fully-grown deer as a pet. They’re able to jump over high fences and can develop aggression towards humans as they age.

#2: Baby Deer Are Alone for Hours While Their Mothers Search for Food

If you ever see a baby deer seemingly alone in the wilderness, the best thing you can do is leave the animal be.  This is because when mother deer go forage for food for their young and themselves, they are known to leave their babies unattended for hours at a time.

Baby deer have a spotted, light-colored coat that helps them blend in with their surroundings. Since this allows them to be difficult to see by predators, mother deer often leave their babies in areas with tall grass or beneath bushes where the tiny animals can hide. Mother deer tend to venture far away from where they leave their babies to avoid attracting predators to their location.

In most cases, baby deer are perfectly safe on their own while they await their mother’s return. Rescue missions are only necessary if the animals appear injured or are someplace unsafe, like alongside a busy road.

While deer fawns rely on their parents for survival for their first few years of life, they must eventually venture independently. Deer usually travel in groups of around 25, which is called a herd. The only exception to this rule is male deer, or bucks, who sometimes prefer to travel alone.

This is significant to deer babies because male deer are far more likely to leave their mothers than females. On average, male fawns go to venture out into the world alone at around a year old. Females, on the other hand, tend to stick around until they are about two.

#4: Deer Can Have Twins and Triplets

Can you imagine anything cuter than tiny fawn siblings? We definitely can’t! You might be surprised to learn that deer can have multiple babies at once, with twins and even triplets being possible.

In deer pregnancies, somewhere between 15% and 20% will result in triplets. Compare that to the chances of human pregnancies of .1%, and it adds some perspective to that insane number. That means that deer are 100x to -200x likely to have multiples in pregnancy than humans. That’s a big difference!

For these numbers to be so high, the deer population must have plenty of access to food, an intact habitat, and a proportionate number of predators in their area. If any of these areas are out of balance, the likelihood of multiples drops drastically. This is because most multiple pregnancies in deers are attributed to a female mating with multiple males.

#5: Baby Deer are Born with Only Four Teeth

When baby deer are born, they only have four teeth on their lower jaw and none on their upper one. By the time they reach 18 months of age, the fawn will have a complete set of adult teeth. However, deer never grow teeth on their top jaw. Instead, they use their molars to twist and grind their teeth down.

Since baby deer are herbivores, they only eat plant matter, so they don’t need sharp teeth.

Baby deer are called a fawn. It’s interesting to note that elk, moose, and reindeer are all species of deer but instead are called calves. So, why are smaller deer species known by a different name?

The origin of fawn as the name for baby deer comes from the word fawn. In Old English fawn meant rejoice or to be glad. Today we might say we “fawn” over a cute baby, but in Old English the phrase stuck with what we call baby deer! Baby deer are sometimes also called calves, but isn’t a fawn just more fun?

What are baby deer called?

A baby deer is called a fawn.

How much do baby deer weigh?

What do baby deer eat?

Fawns drink their mother’s milk exclusively for their first 2-3 weeks of life. After that, they start tasting grass. They will eventually migrate to a diet made up of moss, grass, flowers, fruits, and vegetables. 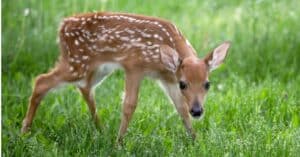 A Curious Deer Accidentally Creates The Most Peaceful Scene Ever 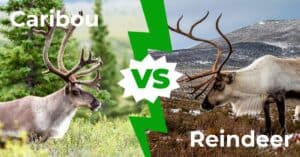