Discover the 10 Most Popular Snakes in the World

Snakes are becoming more and more popular as the years go on. For any skeptics out there, snakes may just be the perfect pets! They never make noise, only need to be fed once a week, are almost always harmless, and come in stunning colors.

There are some things to take into consideration when having a snake as a pet. For instance, you’ll need to pet-proof your home, and consider other pets you have that may be a threat to the snake, or vice versa. A pet snake will need an appropriate sized cage or tank, good ventilation, clean and safe bedding and surroundings, vitamin and mineral supplements, and in some cases, a humid environment. And you’d generally feed a pet snake pre-killed, thawed rodents.

If you are considering a snake, there are many popular options out there. Today, we will discover the ten most popular snakes in the world. Additionally, we will go over what makes them unique and what makes them so popular. Let’s get started!

The 10 Most Popular Snakes In The World

While there isn’t a running tally of “who owns what snake” in the world, we have a pretty good idea of the most common snakes that people keep as pets. Most of the snakes on our list can be found in a pet store, but the ones that can’t are able to be found online from breeders directly. For reference, our local Petco carries over half the snakes on our list, and a quick Google search gets you in touch with breeders who ship the next day across almost all of the United States.

However, an important note is that these are the most popular snakes in the world, not necessarily the best beginner snakes to choose as pets. There is most assuredly some overlap, but we will be sure to reference which snakes are good for what level of handler.

The ball python may just be the most popular snake in the world. Everyone has seen a ball python at some point, and most people have held them. School science exhibitions will almost always have a handler with a ball python on his shoulder or wrapped around his arm. Their exposure has undoubtedly made them popular pets. Hence, they are often the first snakes people imagine as pet snakes.

Ball pythons are solid snakes for beginners. They are incredibly easy to handle, are rather hardy snakes overall, and don’t require expensive equipment to get started. Also, the morphs they come in are truly astounding.

Why are ball pythons popular pets?

If we had to guess the only snake that could potentially compete with the ball python for popularity, it would be the corn snake. Corn snakes are probably the best snakes for beginner reptile owners and come in some of the most stunning color morphs of any snake species in the world.

Part of what makes corn snakes so popular is their morphs and pricing. You can get one of the coolest snakes in the world for less than $100, guaranteed. When you add in how easy they are to handle and their lack of pickiness, it’s clear why they are some of the most popular snakes around.

Why are corn snakes popular pets?

The red-tailed boa (otherwise known as the common boa) is likely to be confused for the ball python, but only when it is young. This snake gets much larger than the other snakes on our list (up to 10 feet). Even with all that size, it is a popular snake and is often kept as a pet.

The red-tailed boa is an amazing snake for beginners who don’t mind a larger snake requiring specific food needs. The only reason boas aren’t more popular than they are is likely because of their size and occasional propensity to bite.

Why are red-tailed boas popular pets?

Most pet kingsnakes are from the California kingsnake subspecies (found in California). These snakes are found in the wild, but most people get theirs from stores or breeders. They aren’t as common as some of the other snakes on our list, but they are still some of the best options for anyone wanting a scaly pet.

Why are kingsnakes popular pets?

The rosy boa is another boa that ended up on our list, and it easily deserves its spot. While you may not have heard of the rosy boa if the world of reptiles is new to you, anyone involved in the scene knows about this amazing little snake.

Rosy boas are popular because of their incredibly docile temperament and beautiful colorations. Another part of what makes these snakes so cool is that they are real boas living in the United States’ southwestern deserts!

Why are rosy boas popular pets?

Milk snakes get their name from the old belief that they would drink milk from cows since they were always found in barns. Today, milk snakes are popular pets and can be found natively across much of the United States. They are somewhat common as pets but not nearly as much as ball pythons or corn snakes. They look like the dangerous coral snake but are simply mimics that use it as a natural defense mechanism. Interestingly, they belong to the same family as kingsnakes and have many of the same characteristics.

Why are milk snakes popular pets?

The western hognose snake is an interesting snake that is also on the rise in popularity. Native to North America, these snakes have an upturned snout that makes them distinct from other pet snakes. They are very docile and very friendly snakes, perfect for beginners.

Despite the gross name, rat snakes are easily some of the more popular pet snakes in the United States. They are great for beginners, although they aren’t as cuddly as some other species on the list. Additionally, they come in various morphs, all of which are inexpensive. If we had to guess, rat snakes are likely just under corn snakes in popularity. However, these snakes can be quick and aren’t as slow-moving as some of the other options on the list.

Why are rat snakes popular pets?

Garter snakes (often incorrectly referred to as garden snakes) are some of the most common wild snakes across the United States. Additionally, they are some of the more common pet snakes, especially in recent years. There are many different species of garter snake, all with a unique and beautiful pattern. Captive-bred snakes make for good pets, but the quick nature of the snake may make them a bit tougher to handle.

Why are garter snakes good pets?

Kenyan sand boas are on the rise and will likely be one of the most popular snakes in the coming years. They are amazing little snakes that come from Africa’s arid and desert regions. Kenyan sand boas make for great beginners due to their easy temperament and low needs. They are some of the cutest snakes around.

Summary of the 10 Most Popular Snakes in the World

Here’s our list of the 10 most popular snakes that people keep as pets:

How Many Spiders Are In The World? 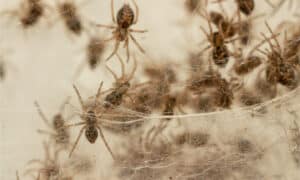