There are over 80 species of coral snake worldwide. 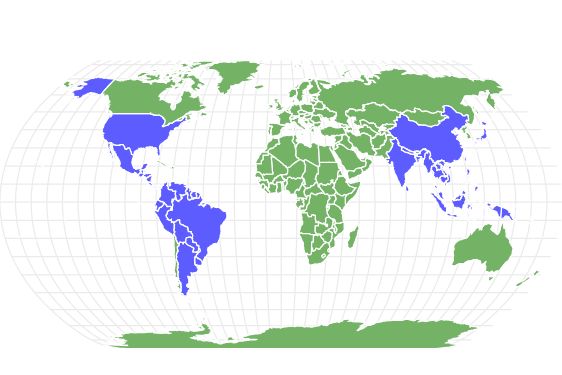 View all of our Coral Snake pictures in the gallery.

View all of the Coral Snake images!

Coral snakes are highly venomous members of the Elapidae family. They’re split into Old World and New World groups, most of which inhabit sparsely populated areas. They’re generally small snakes, between 2 and 4 feet, but some can exceed 5 feet in length; the Arizona coral snake is sometimes thinner than a pencil.

The Old World groups live in Asia, India, and the islands of Southeast Asia. These snakes are classified into three genera with about 20 species. They exhibit the widest variation in color patterns, from mostly blackish-blue with orange on their head and tail.

The New World coral snakes live in the Americas, in the southern United States, throughout Central and South America. Many of them have red, yellow, and black patterns but not all. Of all the coral snake species, the Americas are home to by far the largest variety. There are dozens of species, approaching 80; however, with all that variety they are only classified into two genera.

Where to Find Coral Snakes

Coral snakes inhabit the Americas, like in Alabama, and many areas of India, Asia, and the islands of Southeast Asia. These snakes vary widely in behavior, but are mostly fossorial, digging into leaf litter and hiding in abandoned burrows. Many do not come out except to breed or during the rainy season. A few are mostly aquatic and spend most of their time in the water with dense vegetation.

They’re part of the Elapidae family, cousins to snakes like cobras and mambas. Coral snakes are classified under several genera, all with different meanings:

Each of the specific names either gives further detail about the snake’s physical description or honors a person involved in its discovery.

Most of the Calliophis species inhabit areas from India east to the Philippines.

Both members of this genus inhabit the Philippines: The barred coral snake (H. calligaster) and H. gemianulis.

The United States only has a few species. The eastern coral snake (Micrurus fulvius) ranges from North Carolina to Florida, and west to Texas. It’s the brightest-colored of all the North American coral snakes and is small. They only reach about 2 feet long.

The Arizona or western coral snake (Micruroides euryxanthus) has several subspecies and inhabits North America from Arizona to Sinaloa, Mexico.

Texas is home to its own coral snake, the Texas coral snake (Micrurus tener), it has a few subspecies also, and lives in northern Mexico, Texas, Louisiana, and Arkansas.

The Micrurus genus holds most of the world’s coral snake species – there are approximately 80 species in this extensive list. They occur in the Americas in the southern United States, Central America, and South America. Many species have more than one subspecies.

The red-tailed coral snake (M. mipartitus) is one South American snake that has white bands and a striking red color on its head and tail; it inhabits Panama, Colombia, Ecuador, and Venezuela.

The rhyme many school kids learned works most of the time for the eastern and Texas coral snakes; it sort of works with the Arizona species which often has white bands instead of yellow. It’s not completely reliable, however, and the further you go from the United States, the less it works. Add to that, several snake species mimic coral snake colors, such as the king snakes and milk snakes that have similar banding.

So, learning to identify the coral snakes that live in your area is the best way to go.

Snakes such as the eastern, Texas, and Arizona coral snakes do have a couple of things in common: They have blunt heads and tails, and their color pattern extends all the way around their bodies. The non-venomous look-alikes’ color stops at their bellies.

The rhyme doesn’t work at all with Asian species; their colors and patterns vary greatly from species to species.

Read about what coral snakes eat.

Venom: How Dangerous are Coral Snakes

Despite their highly toxic venom and fearsome reputation, North American coral snakes are considered less dangerous than rattlesnakes and copperheads. Their venom is the second most toxic in the world after black mambas and is composed of neurotoxins that attack the respiratory system. A severe bite can cause death in just a few hours, which makes immediate medical care vital.

Toxicity of their venom aside, these snakes have a poor venom delivery system. Unlike vipers, coral snakes don’t have hollow fangs attached to a venom gland. Their fangs have a groove that the venom travels down when they bite; rather than striking and releasing, coral snakes have to chew on their prey to get venom injected.

Coral snakes are highly venomous, but surprisingly few bites occur every year. Unlike the mambas and cobras, their less reclusive cousins, they are excellent escape-artists and often leave before you ever have a chance to see them. If you do see one, your best bet is to back away and give it space to leave; they’re not generally aggressive and will not chase you.

They’re reclusive and spend much of their time buried in leaf litter, underground, or otherwise hidden on the rainforest floor. Over 90% of the bites incurred happen after someone picks up one of these snakes.

As with other dangerous animals, only those with proper training and experience should handle them.

Yes! Like all members of the Elapidae family, which includes cobras and mambas, coral snakes are highly venomous.

How do coral snakes hunt?

There’s a lot that isn’t known. We know that many coral snake species love to eat other snakes (including their own), and when they strike, they hold on so that snake they’re trying to eat can’t get away.

These snakes aren’t aggressive, they spend most of their time underground and generally avoid people.

Where do coral snakes live?

Most species are in the Americas, but Asia has 3 genera.

What do coral snakes eat?

It depends. Most eat mice, rats, and birds; some specialize in eating others snakes, and the aquatic species eat fish.

Is a coral snake more venomous than a cottonmout?

A coral snake is more venomous than a cottonmouth snake.