This ancient fish belongs to a genus that evolved during the Devonian period.  They evolved armored features, which reflects the meaning of their name. The ancient creature is called Cephalaspis. It was a fish genus of medium size which lived in freshwater seas. Cephalaspis belongs to a class of fish called Osteostraci.

This fish was discovered in the early 19th century and named by Louis Agassiz. Its fossils have been unearthed in regions from North America to Europe. It is the subject of a popular series on BBC titled ‘Walking with Monsters.’

Cephalaspis is the jawless fish of the Paleozoic era. Their mouths are located under their head, like a shark. Due to its mouth position, it is suggested that it often feeds off the ocean floor. Their biological evolution also suggests that they were prey to other marine creatures of the time.

It is hard to imagine how a jawless creature can feed and survive as the Cephalaspis did. This article will describe the Cephalaspis when it existed and went extinct. We shall also discuss the unique features of this ancient fish and some of the reasons why it evolved these features.

Cephalaspis means ‘head shield’ in greek. The name describes the most notable and unique feature of this ancient fish. It evolved from a genus of fish with armored heads. This fish evolved during the early stages of the Devonian period.

They evolved about 400 million years ago in the now Western part of Europe. The Cephalaspis genus has three identified species. They are; Cephalaspis lyelli, Cephalaspis magnificent, and Cephalaspis tenuicornis. Some features of this ancient fish are:

Cephalaspis had patches at the middle of its head that worked as sensory receptors. They used these patches to sense prey and other organisms on the ocean floor. Their lack of jaws means they could not bite or chew their prey. It also means they had no means of attacking other vertebrates in the water.

Cephalaspis features one of the first complicated brains in evolution, which gave them the advantage of memory. They would go to inland waters and freshwater when mating season comes. They would remember their hatching grounds and return to it.

Cephalaspis was a small fish similar in size to today’s trouts. Their small size and nonintimidating features suggest that they were prey to other fearsome marine creatures of the time. Their tail was strong and helped them navigate when swimming. They could only swim fast for short periods as they get tired quickly.

This ancient fish could process information from its surroundings with its complex brains. They started the evolution of complex brains, which humans have inherited. Their complex brain also served as a defense mechanism that helped them survive.

Diet – What Did the Cephalaspis Eat?

Cephalaspis was a unique creature that had its mouth under its head. It had patterns in the middle of its head that served as sensory receptors. Cephalaspis used these receptors to sense movement, electrical pulses, and pressure changes. It likely scavenged the ocean floor for prey and organisms to feed on.

Cephalaspis was a detrivore. A detrivore is an animal that feeds on dead organisms. These organisms can include dead marine organisms or plant waste. This ancient fish also preyed on marine microorganisms.

Cephalaspis consume prey by sucking them in, as an angel shark does. It would use its head to stir the ocean floor to reveal prey hiding under it. This fish also digs up crustaceans and worms from under algae and mud.

Habitat – When and Where the Cephalaspis Lived

Cephalaspis lived between 415 to 398 million years ago. They lived during the early Devonian period. This period is the fourth period in the ancient Paleozoic era. They lived in shoals and waters around North America and Europe.

This ancient fish had a migration behavior. They would relocate away from predators to mate and breed. As a smarter animal, it would go to waters that its predators cannot reach, freshwater and inland waters.

Threats and Predators to the Cephalaspis

This ancient fish was likely prey for big anthropods of their period. Sea scorpions and Brontoscorpio are part of their predators. They were small in size and had no way of attacking bigger animals. They had no jaw and no teeth, and their mouths were under their mouth. It would have been inefficient to attack predators even if they had teeth.

Cephalaspis evolved defense mechanisms for protection from predators. They had armored heads, and they were fast swimmers. They also had a more advanced brains. This fish could swim away from predators quickly when they needed to.

They also had their version of what the lateral line of today’s fishes is. They could sense the smallest vibration underwater, which served as an early warning of a predator’s presence. Their skin had sensors that detected these vibrations.

Discoveries and Fossils – Where the Cephalaspis Was Found

Cephalaspis was first discovered in the early period of the 19th century. Their fossils were found at the Old Red Sandstone, Britain. In 1835, Louis Agassiz gave names to the fish. Most of the fossils were found in freshwater regions.

Extinction – When Did the Cephalaspis Die Out?

CEphalaspis existed during the Devonian period between 400 to 398 million years ago. This period is described as the age of fish. Cephalaspis likely went extinct as the Devonian period lapsed. This ancient fish’s extinction could be attributed to the Great Dying that almost erased all life in the ocean.

The Great Dying was caused by carbon release into the atmosphere, which caused global warming. The oceans dried up, and marine animals couldn’t breathe. This extinction is the biggest in history to happen on earth.

Similar Animals to the Cephalaspis

Cephalaspis belongs to an animal group called Osteostraci. They are fish with a body armored and without a jaw. Different species of this fish existed and lived with the Cephalaspis. They went extinct with the Great Dying, but some fishes today have evolved to become jawless fish.

Some similar animals to Cephalaspis include:

Lampreys are vertebrates with a lengthy and narrow body and no jaw. They do not have scales on their skin like other fish. Lampreys have a mouth that looks like a sucker. They use these suckers to suck fish in. they also feed on microorganisms provided by the environment.

Hagfish is an eel-like fish with no eyes. It’s not a vertebrate. It doesn’t have a jaw, but it has a skull. They’re the only animal today with a skull without a vertebrate column. Hagfish feed from the ocean floor. They feed on carcasses of dead animals or dying animals.

Angel shark is a fish with a flat body and five pairs of gills. They can grow to about 6..5 feet and weigh about 77 lb. It is a solitary animal and can live up to 30 years. They can be found on the coasts of Mexico, California, Costa Rica, Chile, and Alaska. This fish has about 15 known species, and they all have their unique color, habitat type, and size.

Sharks are carnivorous sea animals that have ruled the oceans for millions of years. They can grow up to 65 feet and can weigh about 11 tons. There are about 440 identified species of sharks. They have existed as far back as 400 million years ago. It means their ancestors likely lived with the Cephalaspis. Some sharks also have a similar mouth position to the Cephalaspis.

The Manta ray is a sea creature whose name describes how it looks. ‘Manta’ means cloak or mantle in Spanish. This animal is a flat but very wide stretched animal. It can weigh up to 3000 lb and measure about 23 feet. Manta rays feed on small sea animals like zooplankton and dissected worms. This animal shares a streamlined and flat body shape with the Cephalaspis, though much greater in size.

Cephalaspis is a fish that does not have many close relatives existing today. Their closest relatives today are Lapreys and Hagfishes. Cephalaspis started the evolution of complex brains in animals. The brain evolved into the critical thinking and problem-solving brain humans have today.

Cephalaspis developed defense mechanisms to help it survive despite its harmless features. Its warning system and fast swimming help it sense and escape from prey in good time. They also have armor skulls that help protect their complex brain.

When was the Cephalaspis Alive?

Cephalaspis was alive during the Devonian period of the PAleozoic era. They lived between 400 and 395 8 million years ago. This period is famous as the age of fish.

How Big was the Cephalaspis?

Cephalaspis was not a large animal. It can measure up to 1.4 meters long and weigh about 10 lb. This animal was small enough for its size to be a disadvantage to its existence. It was prey for anthropods that were bigger.

When did the Cephaspis go extinct?

Cephalaspis went extinct as the Devonian period ended. This period ended the fourth period of the Paleozoic era with the Great Dying. The Great Dying was an extinction event caused by global warming.

Male vs. Female Parakeet: What Are the Differences? 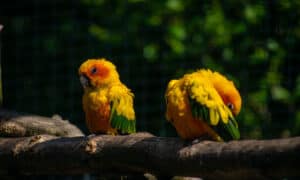