Discover The 7 Largest Animals In North Carolina, and Where You’ll Find Them

North Carolina is a coastal state that is known as a popular vacation spot. This state is great for people who love history, fishing, exploring protected wild areas, and enjoying the ambience of Southern cities. North Carolina has a lot of unique animals within its borders. Today, the largest animals in North Carolina are our main focus, and we’re going to show you seven different species and tell you where they live in the state!

What Are The 7 Largest Animals in North Carolina?

The blue catfish is known for its large size, bluish-grey body, and having no scales on its body. These fish are commonly caught for competitive purposes since they grow so large, an average of 3 feet long with a weight of 20 pounds.

However, the largest blue catfish ever caught in the state was much larger than average. It weighed an incredible 127 pounds and measured 60 inches long! This fish was caught on the Roanoke River, showing just how widespread and accessible this fish is to people.

The mute swan is one of the largest animals in North Carolina, and it’s one of the largest birds in the entire United States. These birds have a body length that can exceed 5 feet long, and they look majestic on the water. They have white feathers on most of their bodies, a face with a dark black color, and an orange bill.

Elk are the second-largest animals in North Carolina, but they aren’t native to the state. Instead, they were introduced to the land years ago in an attempt to see if they could survive in the area. They haven’t exactly exploded in population, but it’s believed that the original population of 52 grew to perhaps 200 elk in 20 years.

These animals are large, measuring almost 9 feet long, standing 5 feet tall at the shoulder, and weighing up to 1,300 pounds. These are large wild animals that need to be avoided should you encounter one.

The American alligator is the largest animal in North Carolina, but it’s not a common sight throughout the whole state. Instead, it is typically found in the coastal areas of the state, especially in the southern part of North Carolina. However, it can be seen far inland, almost to the south-central part of the state.

These alligators live in freshwater ponds, lakes, swamps, and other bodies of water. They are even rarer in the northern part of the state. It’s important to avoid these creatures since they are large and violent. Alligators measure up to 10 to 12 feet on average and weigh upwards of 500 pounds, but they can get even bigger.

Even with its low population in the state, you need to be wary of this reptile. If you encounter a gator, you should back away from them and get somewhere safe. They’re somewhat fast on land when attacking and even faster in the water.

The eastern hellbender is a giant salamander living in North Carolina, and it’s the biggest amphibian in the state. It grows to an average length of 1 to 1.5 feet, but some can grow up to 2.5 feet. It’s usually found in moving bodies of water, like rivers and streams. Yet, they are only found in the western counties in the state.

Eastern hellbenders often have dark flesh that is reddish-brown to grayish-brown, but some can appear even darker. The creatures have patterns on their back, but they’re hard to see. Speaking of hard to see, these are nocturnal creatures that hide under rocks and logs for most of the day. They’re not dangerous, but they are listed as a species of special concern.

Their wings are black and patterned with yellow in a horizontal line across the forewings and a U-shape along the hindwings. These beautiful butterflies are spotted from May to September.

The Carolina wolf spider is both one of the largest spiders in the U.S. and the biggest spider in North Carolina. This creature is often dark brown in body color, and it moves quickly since it’s a spider that actively hunts its prey.

These spiders can measure up to 4 inches long, including their legspan and over an inch in body size. They are frequently seen in the lower levels of homes, especially basements, as they pursue prey indoors and become trapped. Outside of buildings, they reside in burrows in flat areas or forested places.

Now that we’ve covered the largest animals in North Carolina, you should have a good idea of the diverse wildlife that survives in this state. More importantly, you should realize their potential to harm people. Always observe wild animals from a distance, especially large ones.

This Leopard Is Alarmingly Calm Walking Up to a Giraffe 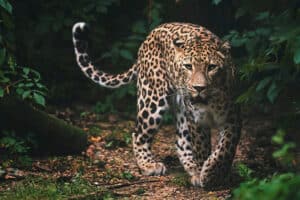