Despite its name, actually originated from Africa and the Middle East 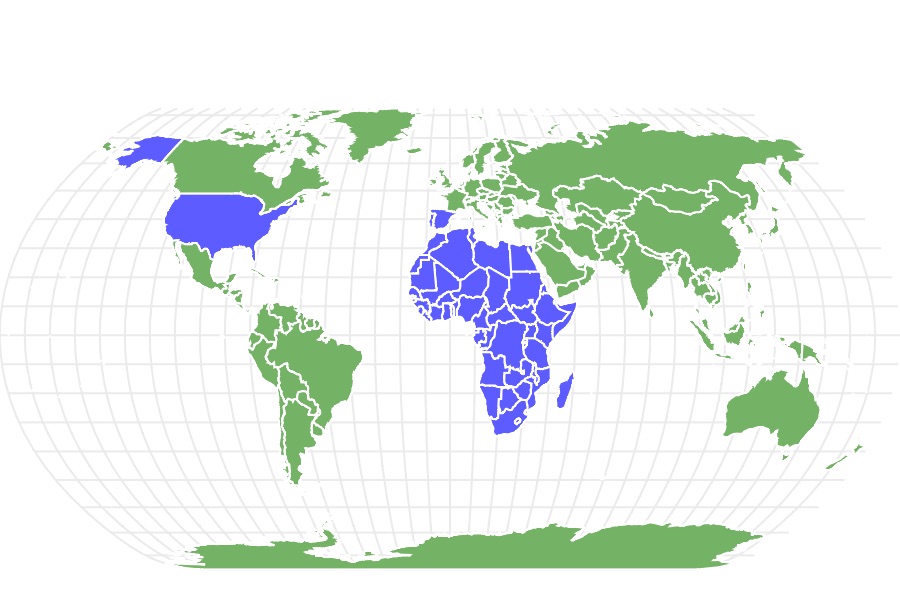 View all of our American Cockroach pictures in the gallery.

View all of the American Cockroach images!

“The insects were introduced to America, Portugal, and Spain from Africa on ships involved in the Atlantic slave trade and other commerce after 1625.”

The American cockroach, sometimes referred to as a waterbug in the United States, is a nocturnal pest that originated in Africa and the Middle East. It is believed that these roaches traveled to America for the first time aboard Atlantic slave trade ships sometime around 1625. They are the largest species of cockroach, live the longest, and can actually fly short distances when necessary. Despite their nickname, these bugs do not live in water. But they do prefer warm, moist environments over desert regions. Their life cycle includes three stages including eggs, nymphs, and adults. The egg gestation period is six to eight weeks.

As omnivorous scavengers, these common cockroaches will eat just about any organic matter. They prefer meats, starches, and sweets. But they are known to consume just about anything organic, including decaying matter, books, and hair.

The American cockroach is a member of the genus Periplaneta, a classification of large urban-dwelling cockroaches of the family Blattidae and order Blattodae. There are 47 cosmopolitan species of roaches in Periplaneta and about 4,400 species of cockroaches and termites in the order Blattodae. The American cockroach is now found in Spain, Portugal, the Canary Islands, and throughout North America. Along with other types of cockroaches in specific areas, the American roach can make up as much as 24% of the animal biomass.

Appearance: How To Identify American Cockroaches

American cockroaches and other species of roaches are genetically similar to the termite. This is why scientists have reclassified termites and roaches into the same order, Blattodae.

American cockroaches are reddish-brown in color with some yellow features, such as just behind the head. These are the largest species among common cockroaches, with an average length of 1.6 inches and a height from the surface of about 0.28 inches. But they are not as sizeable as the largest flying cockroach ever found in the world. That is Megaloblatta longipennis found in Peru, Ecuador, and Panama with one flying specimen measuring 3.8 inches in length with a wingspan of eight inches.

Their bodies have three sections: the head, thorax, and abdomen. Overall, the body is flat and wide in an oval shape, weighing about 0.105 grams at adulthood. Its head features a shield-like covering called a pronotum. At close range identification of the roach’s chewing mouth parts is possible. They also have long antennae and two sets of wings, some of their most important features. The fore wings are stronger and leathery while the hind wings are delicate and thin. While the American cockroach typically crawls on surfaces, a startled roach of this species is capable of flying short distances.

Because these roaches are nocturnal, you generally will happen upon one or multiple at night. Turning on a bright light will startle them into quick motion at high speed. They will scamper away when perceiving a threat like a human entering a room. Sensitivity to vibrations makes them run from slamming doors, clapping, foot stomping and other sudden sounds and movements.

American cockroaches go through three stages in their life cycle, from egg to nymph and then adult. Their young, the nymphs, look just like adults but do not have wings. They molt an average of 13 times before metamorphosis. The nymphs can regenerate limbs, whereas adults cannot. Senior American cockroaches have trouble crawling up walls or along surfaces because of their age.

These roaches live in colonies called intrusions. An intrusion works together to find food and other resources. Upon a small group of scouts’ identification of food or water, they release a distinct tracking odor called an aggregation pheromone to signal the rest of the colony to join them. Because members of one roach colony do not all come out at once, the number you see is just a mere fraction of the actual colony size. When roaches infest homes, they are called infestations.

Habitat: Where to Find American Cockroaches

American cockroaches originated from Africa and the Middle East. They traveled on commercial ships, such as those of the Atlantic slave trade, to North America and Spain in the 1700s. From there, the roaches inhabited anywhere people live, eat or dispose of waste. Today they are found throughout Spain, Portugal, the Canary Islands and North America.

These pests prefer living close to easily scavenged food sources and live both above ground in buildings and below ground in basements, sewers and other underground systems they use as superhighways to food sources. You can find them living in your walls, kitchen, bathroom, cabinets, basement, crawl spaces, lawn and under other man-made structures like sidewalks, garbage receptacles, storage buildings and porches.

These pests carry at least 22 species of harmful bacteria, viruses, fungi and protozoans that can infect humans. They also carry five species of parasitic worms. One of their biggest threats to humans is the pests’ production of airborne allergens, proteins that cause asthma attacks and allergic reactions.

American cockroaches can scamper out of view at speeds up to 3.4 miles per hour. This is the equivalent of a human running 210 miles per hour. They run away because of threat identification and as a reaction to light. Their eyes have over 3500 lenses, making them more sensitive to light than humans. They can easily run under doors and through very small cracks, crevices and gaps. Because they are nocturnal, they are most easily seen at night.

Diet: What do American cockroaches eat?

American common roaches are opportunistic scavengers. As true omnivores, they will eat just about any organic matter. Have a look at our “What Do Cockroaches Eat?” page for a complete list of everything that a cockroach eats.

What eats the American cockroach?

Many small mammals, amphibians, spiders, birds and reptiles eat American cockroaches. Their predators vary according to the location and habitat. For example, in tropical environments, predators include spiders, ants and mantids. Toads, fish, frogs, turtles, salamanders, lizards and geckos also eat them. Mammalian predators include cats, mice, rats, monkeys, opossums and porcupines. However, the roaches often carry viruses and parasites. They can pass these on to humans, as well as animals that eat them. Some of the parasites they carry include wasps, fungi, bacteria and protozoa. Some wasps also eat American cockroach eggs, laying eggs within the roach egg sacs to sustain the wasp’s young.

What does the American cockroach eat?

They eat man-made food products, decaying plant matter, plant shoots, vegetables, fruits, meats, sugar, starches, decomposing animals, solid waste and even ear wax from the inside of a human or animal ear. They will eat book bindings, hair, cosmetics, milk, soap, glue, wallpaper paste and fabrics. Some studies suggest they eat about half of their body weight each day.

Prevention: How to Get Rid of American Cockroaches

American cockroach colony infestations are notoriously difficult to exterminate. It is best to fight these pests both inside and outside of the home or structure at the same time. Start by caulking cracks and joints in ground level walls, clearing away rotting leaves or other debris and reducing moist areas around the structure. Then apply insecticides on basement walls perimeters, wood piles and other places where the infestations have occurred. A professional exterminator can apply residual spray throughout the household and around its perimeter to kill roaches at all of their life stages, including those in egg sacs during the gestation period. Another method involves use of poisonous pellet baits.

American cockroaches are dangerous in large numbers, in that they carry pathogens and parasites. These pathogens can make people sick. They are particularly known for causing allergy problems and asthma attacks through the release of airborne protein allergens.

How many legs does American cockroaches have?

How do you identify American cockroaches?

Identification of American cockroaches is easiest by their reddish-brown color, size of about 1.1 inches to 2.1 inches long, and four wings. The two front wings are used for flying short distances. The two back wings are very thin and delicate, not used for flying.

How do you get rid of American cockroaches?

There are various baits, pellets, and insecticide spray available on the market to exterminate American cockroach colonies. However, the best results come from professional extermination.

How long does an American cockroach live?

An American cockroach can live up to 706 days. But most live about 150 days after reaching sexual maturity at 6 months to 12 months of age. This means they often spend more of their lives in the young nymph stage of the life cycle, than as adults.

An American cockroach is a reddish-brown insect with three segments, four wings, antennae, and six legs. They measure about 1.5 inches in length on average with an oval-shaped body. Their eyes are large and prominent on their small head.

American cockroaches are the most populous where people live and eat. They thrive inside homes and just outside in the yard of houses where they can easily find food, waste, and water. They are most commonly seen in kitchens and bathrooms but live just out of view in walls, through crevices, and in basements. These pests live in large colonies called intrusions, but are called infestations when they become a problem within a home.

These roaches are attracted by warmth, food, waste, and moisture. They thrive in damp environments or dry climates with easily accessed water. Because they are attracted by food and waste, they are particularly prone to infest dirty households, restaurants, or buildings. Keeping a home or other building clean can help prevent intrusion.

Are American roaches hard to get rid of?

Because their colony lifestyle is hidden from view and ability to reproduce in large numbers, American roaches are hard to get rid of. They lay eggs that can survive without their parents. Also because these pests are nocturnal, homeowners often do not realize the magnitude of their infestation until they number in the tens of thousands. It is best to hire a professional who can locate nesting areas and use methods likely to exterminate more of the pests than store-bought products.