Discover The Top Five Largest, Most Dangerous Spiders In Montana This Summer!

Ready to discover the top five largest, most dangerous spiders in Montana? So are we! Montana is a big state, so big it’s called Big Sky Country! You’d expect to find some supersized dangerous spiders with a nickname like that. However, the state of Montana only has one truly deadly spider species. But it does have some sizable spiders, and we’ve picked out five contenders for the largest!

Montana is one of the biggest states in the U.S., with a wide range of habitats like forests, open grasslands, and even mountains. So, it’s no surprise that it has diverse spider species. On this list, we’ve got cobweb spiders, orb weavers, and webless hunters. There’s even a species from a spider family that is often called “the cute spider.” Let’s find out about Montana’s biggest and dangerous spiders!

Danger To Humans: No danger, but is often mistaken for more dangerous species.

Behavior: Skittish, non-aggressive, but will bite when threatened.

Physical Description: This member of the massive jumping spider family is identified by its teal mouthparts and vibrant red abdominal coloring. Females also have a black stripe down the center of the abdomen and are notably larger than males. Jumping spiders are also referred to as the “cute” spider due to their flattened heads and large eyes. These unique features give the appearance of an adorable face!

This species can be found nearly everywhere in Montana. Like many members of the jumping spider family, rather than spinning webs, they prefer to hunt their prey. Using their signature jumping skills, they ambush prey and deliver a venomous bite. Lucky for us, their bite is painful but not deadly to humans!

Behavior: Will bite if threatened

Physical Description:  Hobo spiders range from light to a darker brown with multiple V-shaped marks on the central abdomen. In some cases, one light stripe on the mid-sternum is present. This species is classified as a funnel weaver, a term for the tubelike structure of the webs they create.

Hobo spiders earned their names for being nomads, so it’s not surprising that they are found all over Montana! People encounter the hobo spider in their homes, primarily in the winter months. These spiders don’t enjoy the cold and may decide your house is a nice place to escape the chill.

Danger To Humans: Venomous, but no danger to humans

Physical Description: Marbled orb weavers are also called pumpkin spiders because of their orange-colored abdomens. However, they may also have a dull yellow abdomen with a darker rear marking. Other notable markings are yellow dotting along the legs and one bright yellow X-shaped marking on the abdomen.

Like many other orb weavers, this species prefers forested areas and places with concealing vegetation. It’s no surprise that the marbled orb weaver can be found throughout Montana! Though this spider’s flashy colors and markings practically scream danger, it’s all an act to trick predators into not eating them. Their bite rarely, if ever, requires medical attention!

Danger To Humans: Bites are painful but not deadly, rarely require medical treatment

In Montana, the forest wolf spider can be found throughout the state’s woods, forests, and even human homes! Wolf spiders don’t weave webs; these are ambush hunters that prefer to run down their prey. Unlike their adorable jumping spider cousins, the forest wolf spider is known to bite when cornered. Thankfully, even though the bite can be painful, it’s not deadly!

Habitat: Black widow species are found in nearly every type of habitat

Danger To Humans: Highly dangerous venomous bite that can kill in some cases. Quick medical attention is recommended. Females account for nearly all recorded bites.

Behavior: Not prone to overt aggression, will bite when threatened

Physical Description: Black widow spiders are one of the most easily identified spiders in North America. Key identifying characteristics are their overall glossy black carapaces and signature hourglass markings. Despite common misconceptions that this hourglass is always red, white, or orange are also common!

Widow spiders are found in nearly every U.S. state, and the Western black widow species is common throughout Montana. Unlike other widows, this species does not exhibit the cannibalistic mating ritual the widow spiders are named for. However, their bite still comes with fever, pain, sweating, nausea, and possible death. This is one spider you don’t want to get a closer look at! 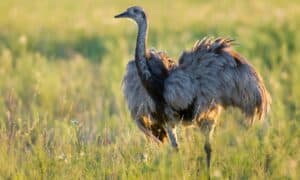