OutdoorWorks/Shutterstock.com
Share this post on:
More Great Content:
Manta Ray Size Comparison: How Big is…
Are Manta Rays Dangerous?
The Biggest Alligator ever Found in South…
Lake Mead Is So Low It's Revealed…
Discover the Little-Known U.S. River Gorge That's…
The 5 Healthiest Vegetables Dogs Can Eat…

Of all the fish in the sea, manta rays have got to be amongst the most graceful and breathtaking creatures.  With a diamond-shaped appearance and huge fins that look like wings, manta rays glide through the water with an ease that belies their size.  Also known as birds of the sea, these huge fish have an average wingspan of 23 feet and a weight of about 4,500 pounds.  Not only that, but manta rays actually have the largest brains out of all the fish in the world.

But just how big can manta rays get? We’ll dive into the largest manta ray ever recorded and what size ancient manta rays may have reached!

The Background on Manta Rays

As well as their distinctive shape and massive wings, manta rays can easily be distinguished by their wide mouths and “horns” that are actually called cephalic fins or lobes and are used for channeling water and food into their mouths while they are feeding.  There are two species of manta ray: the reef manta ray (manta alfredi) and the giant manta ray (manta birostris). The giant manta ray is the larger of the two.  Both species have the typical manta ray coloring of black on their back and white on their bellies but giant manta rays have black mouths while reef manta rays have white mouths.  Although these huge rays are often mistaken for stingrays, they don’t have a barb on their tail and so can’t sting.  In fact, manta rays are actually extremely gentle and friendly creatures that are not harmful at all.

Manta rays are usually found in tropical and subtropical waters and are migratory animals that largely follow where the food is.  Reef manta rays are mainly found in the Indo-Pacific ocean while the giant manta rays frequent the seas all the way around the equator.  Ecuador currently has the largest individual population of manta rays with around 650 having been identified there.  In deeper waters, manta rays have often been seen diving to depths of around 2,000 feet, but have been known to go much deeper on occasions, with their powerful wings propelling them through the water.

The Largest Manta Ray Ever Recorded

Despite her super-sized weight, the female giant manta ray only reached a relatively small 20 foot wingspan.  Caught by Captain Khan, a New York silk merchant, in 1933 off the coast of New Jersey, the massive manta ray became tangled in the anchor line of his boat while he was fishing and towed him five miles over three hours while he feared his boat would capsize.

Were Ancient Rays Even Larger?

Many of the largest species today had relatives that actually dwarfed them. For example, while the largest sea turtle today weighed up to 2,019 pounds, ancient sea turtles weighed 2.5 times as much! The largest great white shark ever recorded weighs about 5,000 pounds, but Megalodon may have weighed 20 to 50 times more!

So, were ancient manta rays giants that could reach 50 feet across? While rays have been around since the Jurassic Period (150 million years ago), there’s no evidence of past rays that are larger than today’s giants. This means today’s giant oceanic manta rays could be the largest species to ever swim in the world’s oceans!

Interesting, about 95 million years ago there was a species known as the “eagle shark” that combined aspects of sharks and rays. The unique prehistoric fish has long wings like a ray, but the body of a shark. However, compared to today’s giant manta rays it would be quite small, measuring only 6 feet long.

How do Manta Rays Compare with other Fish?

It is already pretty impressive for manta rays to reach the size that they are without being predatory animals and by eating only some of the smallest food that the ocean can provide, but how do they compare with other fish in the sea?

Manta rays are the fifth largest fish in the sea, behind only basking sharks, whale sharks, great white sharks, and tiger sharks – the largest of which is the whale shark with a length of around 60 feet.  Manta rays are also the biggest of all animals in the order Batoidea which includes stingrays, manta rays, and skates.  With the largest species of stingray having an average wingspan of only five feet, manta rays dwarf them.

There are a few other species of fish – such as the Beluga sturgeon with a length of 24 feet, and the ocean sunfish with a weight of around 4,300 pounds – that come close to the manta ray in size but are still smaller, meaning the manta ray maintains its position as one of the largest fish in the world.

How do Manta Rays Get So Big?

All manta rays are filter feeders and they eat plankton and shrimp and other small organisms.  Manta rays have a unique way of feeding as they hold their cephalic fins in an “O” shape to help push water and food into their open mouth.  Once they have taken in a mouthful of water and plankton they push it over their gill rakers which are like a giant filter to separate out the food and push the water back out.  They often even do great barrel roles while they are feeding to help them take in more food with each mouthful.

As manta rays are so massive they have very few natural predators other than some of the largest sharks and killer whales.  Despite their large size, they can actually move pretty fast and have a top speed of 15mph which helps them get away from predators.  However, their main threat actually comes from us humans as they are often caught up in fishing nets as bycatch.  While there is little data available on total population, both species of manta ray are officially classed as being in danger, with the giant manta ray classed as endangered and the reef manta ray classed as vulnerable on the IUCN red list.

Although manta rays are generally solitary animals, they do come together to feed and to mate.  Possibly one of the most unique and fascinating things about manta rays is the impressive “manta trains” that occur prior to mating.  These manta trains are groups of up to twenty males at a time chasing and following a female for weeks.  Eventually, all but one of the males gives up the chase and the female will mate with the last male left – often the fittest and strongest male.

Manta rays have a life expectancy of more than fifty years and most females are fully mature at around 15 years of age when they can begin to reproduce.  Females manta rays give birth every two to three years and, surprisingly, young manta rays are actually called pups.  Like sharks and some snakes, manta rays are “ovoviviparous” which means that the young manta ray pup hatches from an egg inside the female who then gives birth to a live pup.  Pregnancy lasts for around 13 months and usually only one pup is born.

When we think of a pup, most people probably imagine something fairly small, but that’s not the case with manta rays as even their babies are pretty huge when they’re first born.  Reef manta ray pups have a wingspan of 3 feet when they are born, but giant manta rays are twice that with a 6 foot wingspan which is pretty impressive for a baby.  However, it’s just as well manta ray pups are so big when they’re born as they’re literally on their own from the start.  This is because manta rays don’t nurse their young or form a bond, instead the young pup has to learn to feed itself on plankton straight away. 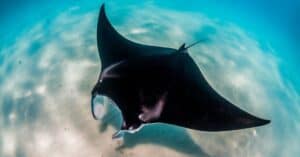 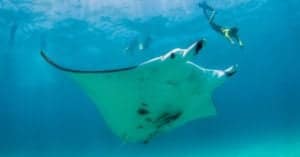 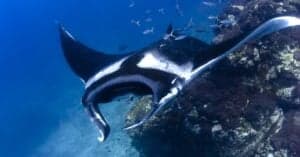