They transfer venom into the predator’s body through spines in their tail.

Click through all of our Stingray images in the gallery. 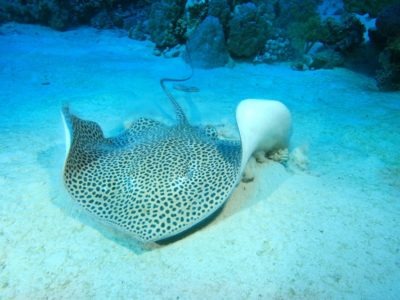 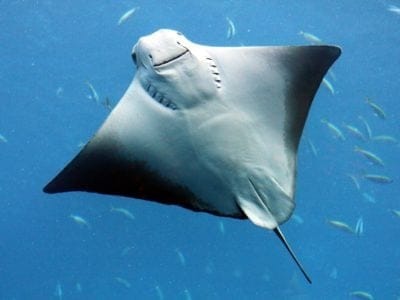 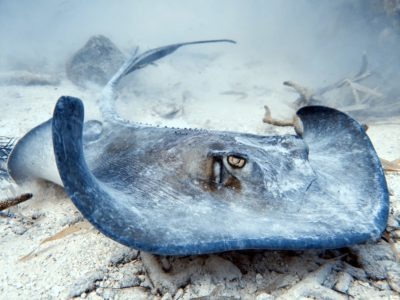 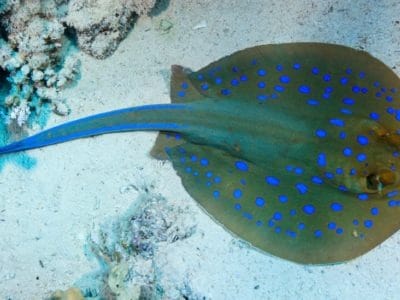 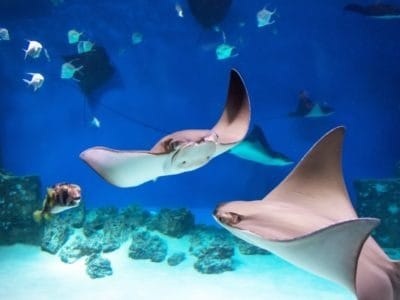 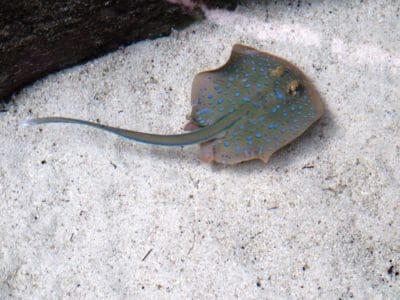 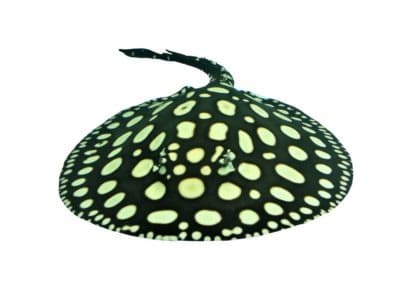 View all of the Stingray images!

Stingrays are very easily recognizable and have pancake-like bodies.

Stingrays are fish that are known to be able to glide gracefully through the water. There are about 200 different species of stingrays in the oceans around the world. They are also found in lakes and freshwater rivers.

However, stingrays all around the world face threat to survival. Rather than bones, the body of a stingray is just made of cartilage. These fish also have camouflaging capabilities that allow them to escape their predators. They are known to hit the predators with their tail upon sensing danger, which is particularly effective as a result of a barb on their tail.

Stingrays go by the scientific name Myliobatoidei. They belong to the kingdom Animalia and phylum Chordata and come from the class Chondrichthyes and order Myliobatiformes. The family and genus that the stingrays belong to are Dasyatidae and Dasyatis respectively.

“Myliobatoidei” is a combination of the word “Myliobatis” and the suffix “-idae.” Myliobatis is rooted in Greek, combining the words “of a mill” (mylo) and “ray” (batis). The suffix -idae is used in the scientific name of zoological families.

Stingrays include ten different families of fish and there are about 220 different species of these fish in oceans, freshwaters, and lakes around the world.

One of the most common freshwater stingrays is the river stingray, and the mother will give birth to live babies, which are called pups. In the Atlantic Ocean (as well as in the Mediterranean and Black Seas), the common stingray thrives, though only in habitats with depths of no more than 200 feet. They prefer to reside in muddy or sandy regions.

In general, none of the species are aggressive without being threatened. The blue-spotted stingray, however, will attack with their venom, which can be fatal when the victim is stung in their abdomen or heart. If the sting occurs in other areas of the body, the outcome will not likely be fatal.

These fish have flat bodies that are only made of cartilage which means that these fish have no bones in their bodies. They have broad fins that are the length of their full bodies. Despite being flat, the fins can often give the stingray a roundish look. Some of these fish look like they “fly” through the water, but the facts indicate that this is just a smooth flapping motion of the fins.

They are also equipped with defensive tails that usually help them to ward off predators when they sense danger.

Since there are so many species, color can vary drastically. Though the majority of these fish have a grey or dark brown back with a pale belly, they can also be spotted with blue dots, yellow dots, brown dots, and other colors. The giant oceanic manta ray has black and white markings, while the leopard whip ray matches the pattern of the land-bound mammal it is named for.

These fish are known to exist in the Black and Mediterranean Seas. This region is primarily the home of the common stingray, the butterfly ray, the thorntail stingray, and the whiptail stingray. This area allows them to thrive in a calm area, often accompanied by sandy or muddy sea floors, as well as reefs.

Very few of them also exist in the northern Atlantic Ocean, southern Norway, and the Canary Islands, depending on the particular species. The Bahamas have become so concentrated with these fish that they are a major tourist attraction in Great Stirrup Cay. There is also a stretch from the Western Baltic Sea to Madeira that makes a great home for these fish.

The overall population of the stingray is not known. However, there are enough of them in the world as there are over 200 different species of stingrays.

The main predators of these fish include sharks and seals. Other large fish also feed on them, since the larger predators in the ocean will go after almost anything smaller than them. However, their flat body and smooth movements allow them to lay against the floor of their natural habitat to hide. Rather than attacking when threatened, most will simply flee as quickly as they can.

For the most part, the primary prey that they go after are fish that are smaller in size than them. They usually eat clams, oysters, shrimp, and other small fish that are found in shallow waters, though they have been known to eat snails and squids.

For the most part, stingrays are not aggressive and are not very high up on the food chain. However, humans will fish for them to capture as a healthy source of protein.

Stingray: The Fish’s Reproduction and Lifespan

Stingray reproduce using internal fertilization which means that a male stingray fish impregnates the female. This reproduction is preceded by courting, which the male does by biting at the female’s pectoral disc. Some stingrays have longer mating periods, taking over half a year before the female becomes pregnant.

The unborn babies are nourished and grow inside egg yolk inside the body of the female stingray fish. While the size of a litter of stingray may vary, the birth typically brings 5-15 live young. Since stingrays have survival instincts in their genes, the young do not stay with their parents after birth.

Stingrays live for around 15 to 25 years in the wild. In captivity, this lifespan can drop down to as little as five years in freshwater tanks with proper care.

Stingray in Fishing and Cooking

These fish are caught using lines or spears and are safe to consume. They are eaten by humans across the globe. The most common dish that is made and savored around the world is dried forms of the stingray’s wings. People have often said that they find the meat rubbery and it tastes a lot like shark meat or scallops.

Where are stingrays found?

Stingrays are found in oceans, freshwaters, and lakes all around the world and are known to exist in the Black and Mediterranean Seas.

The most common predators of the stingray include sea lions, sharks, seals, and other large fish.

Yes, stingrays are purely carnivorous and eat fish that are smaller in size than them. They usually eat, snails, clams, and squids besides other small sea creatures.

How do stingrays sting?

Stingrays use the spines or barb in their tails to attack the predator. The defensive spines on the tails then insert venom into the other body.

While the venom that is inserted during the attack through the spine on the stingray’s tail can be very painful for humans, it is very unlikely that it kills humans.

Where do stingrays live?

They usually live in the Black and Mediterranean Seas. They may also live in the northwestern Atlantic Oceans, making this habitat in sandy or muddy shallow waters.

What Kingdom do Stingrays belong to?

Stingrays belong to the Kingdom Animalia.

What class do Stingrays belong to?

Stingrays belong to the class Chondrichthyes.

What phylum to Stingrays belong to?

Stingrays belong to the phylum Chordata.

What order do Stingrays belong to?

Stingrays belong to the order Myliobatiformes.

What type of covering do Stingrays have?

Stingrays are covered in Scales.

What are some distinguishing features of Stingrays?

How many babies do Stingrays have?

The average number of babies a Stingray has is 8.

What is an interesting fact about Stingrays?

A Stingray’s stinger is razor-sharp or serrated!

What is the lifespan of a Stingray?

How many species of Stingray are there?

There are 200 species of Stingray.

What is the biggest threat to the Stingray?

The biggest threats to the Stingray are sea lions, seals, sharks, and other large fish.

How many Stingrays are left in the world?

The population size of the Stingray is unknown.

How fast is a Stingray?

A Stingray can travel at speeds of up to 30 miles per hour.

How do Stingrays have babies?

Stingrays give birth to live young.