Gnu vs Wildebeest: Is There a Difference?

The continent of Africa is very large and contains an enormous amount of biodiversity. Nations in the southern portion of the continent serve as home to herds of large mammals that are members of the Bovidae family, including the large antelopes that are called wildebeests. In those countries, you’ll often hear some people call these mammals wildebeests while others refer to them as gnus. Is there a difference between them? Today, we’re going to examine the gnu vs. wildebeest and discuss their differences.

Comparing a Gnu and a Wildebeest

Are There Any Key Differences Between a Gnu vs Wildebeest?

The only difference between a gnu and a wildebeest is their name’s origin.

The term ‘wildebeest’ originates from South African Dutch, meaning “wild beast.” Meanwhile, the term ‘gnu’ comes from a Khoisan language. Aside from the name, there are no other differences between these animals. The terms are used interchangeably.

Interestingly, though. More than one type of wildebeest exists, perhaps contributing to the perception that a gnu and wildebeest could be two different animals. The two creatures are called the blue wildebeest and the black wildebeest, but they’re both called wildebeests and gnus.

With their lack of key differences in mind, we’re going to explore the animals in depth to provide you with some valuable insight into their stature and habits.

Wildebeests are antelopes, but they are much larger than dik-diks or impalas. The latter of those smaller antelopes only weighs about 150 pounds at their largest. However, wildebeests can grow upwards of 4.5 feet tall or taller at the shoulder. Moreover, they can measure between 6 and 8 feet long.

Their average weight is about 265 to 550 pounds, meaning they are large creatures. Wildebeests are large and powerful, and they live in herds to use their size as protection against other animals like lions.

These species do have some differences, including the color of their hair as well as their range. We’ll explore the latter fact in greater detail in the following sections. Other than that, the two creatures are very similar to one another.

People may wonder if gnus and wildebeests are terms that refer to either of those species. They are not, and the terms are interchangeable even though there are two species. This is generally the same rule people apply to ‘deer’ in the United States.

The gnu has a very basic diet that does not change much throughout the large range the two species occupy. For the most part, the two animals mostly subsist on grasses as well as succulent plants. Wildebeests are herbivores that usually feed in savanna grasslands.

However, the places they live do not always have adequate water to support the growth of grasses. As a result, they may eat some trees and shrubs. These creatures spend a significant portion of their time grazing, especially during the dry season.

The range of the blue wildebeest is far larger. They are found as far south as South Africa and as far north as Kenya. Still, most of these animals are found in the southwestern countries of Africa. They live in Namibia, Zambia, Angola, and more.

Humans have hunted wildebeests in the past and present. The meat from the wildebeest is considered a delicacy. However, hunting these animals is not frequently allowed. Aside from hunting them for meat, humans have made leather from wildebeests.

The way humans interact with gnus has changed in the present, though. Specifically, gnus have become a tourist attraction to people that want to see these animals in the wild. Some large herds of blue wildebeests participate in a massive annual migration. Over a million wildebeests travel hundreds of miles from Tanzania to Kenya every year in search of rain-soaked areas with abundant grasses.

Tourists watch this event and witness these animals fight to survive in the face of the elements, starvation, thirst, and predation by animals like lions, cheetahs, and crocodiles. Thousands of wildebeests die every year during this migration.

Having examined a gnu vs wildebeest, you should take away that they’re the same animal. Only the names are different. Aside from that, they reference two different species, the black wildebeest and the blue wildebeest. These large creatures are interesting because they are so large and move in massive herds. Their migrations are still a bit of a mystery, but they are incredible to witness, even if they are filled with moments that are disheartening to people. 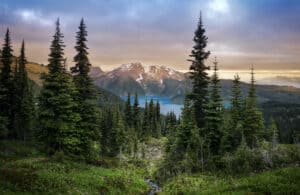 Teak vs. Eucalyptus: The Key Differences 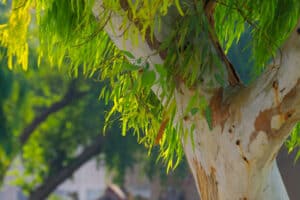