How Fast do Whales Swim?

If there were Sea Animal Olympics there would be several species that would swim in the final heat. Whales are some of the largest sea animals but are they also the fastest? More importantly, just how fast do whales swim?

They wouldn’t get a Gold, Silver or Bronze but they might place in the top 10. Whales, dolphins and porpoises (all part of the whale group Cetacean) have streamlined bodies, are mostly hairless and have strong tail fins. Some are the shape of a torpedo! The whale group is divided into two subgroups, baleen whales (the larger whales like blue whale, fin whale and gray whale) and toothed whales (smaller whales like dolphins, porpoise and belugas). Let’s take a look at some of the fastest whales and see how they compare to some of the other fastest swimmers.

How fast do whales swim?

To discover more about whale speeds, we’ll break them down into toothed whales (which are generally smaller), and baleen whales.

What are the fastest toothed whales?

If you had to choose 3 whales to swim in the 800m freestyle you might want to go with these toothed whales. Similar to human swimmers, these whales have to breathe air so they come up for air 2-3 times a minute while fast swimming. They can hold their breath longer for deep dives but for distance swimming at fast speeds they need the additional oxygen for the cardio. Three of the fastest toothed whales are:

What are the fastest baleen whales?

In the baleen whale division you would have a hard time choosing just one species, but these three would be some of the fastest. They are generally a bit slower than toothed whales, but with their massive size it is quite a sight to see a 80ft whale going 25 mph pass your boat!

What are the fastest sea animals?

Now that we’ve looked at how fast whales can swim, let’s take a broader view of the oceans! If whales had to compete in an open category with other sea animals they would not have a chance of keeping up. Take a look at some of the fastest sea animals:

How Fast do Whales Swim? 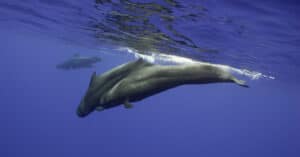