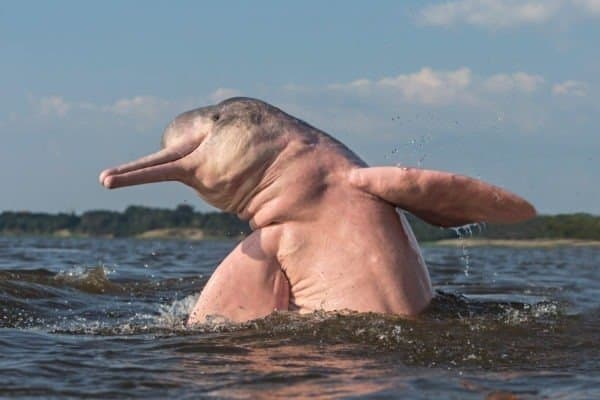 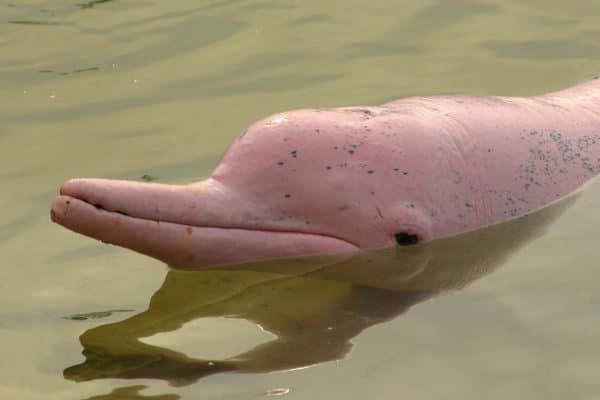 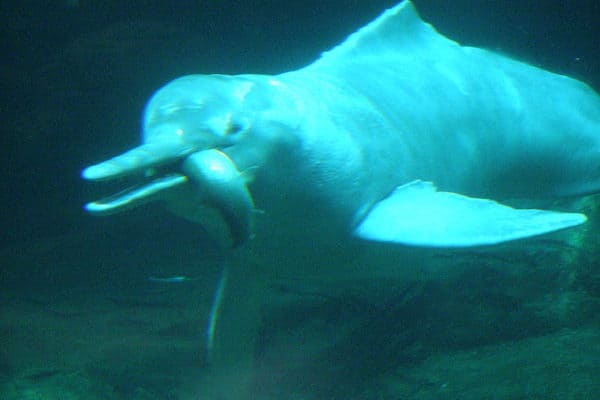 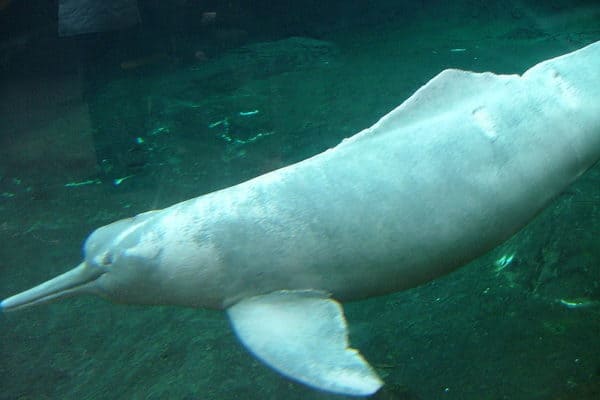 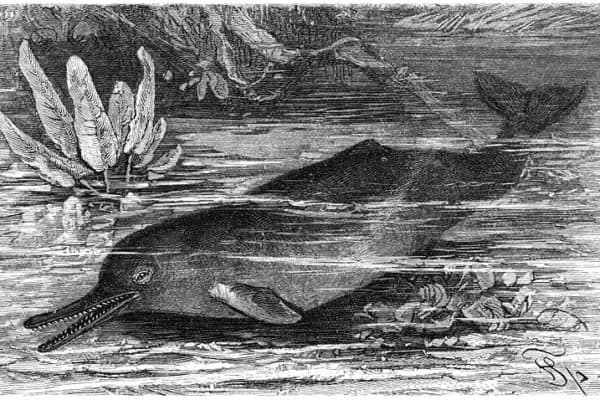 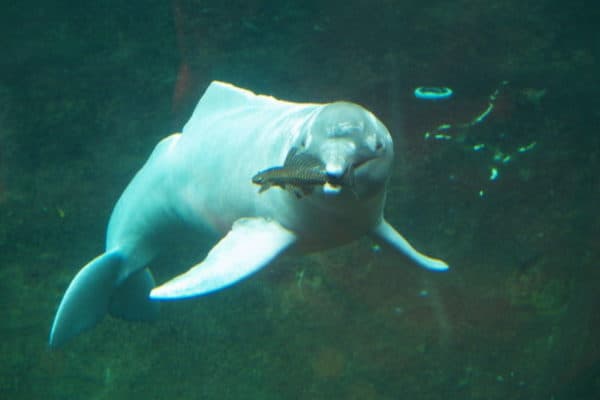 The Amazon pink river dolphin is the biggest and smartest animal of the freshwater dolphin species.

Discover why this elusive dolphins species turns a pink coloring and much more below!

The Amazon river dolphin (also known as the pink dolphin and botos) is a freshwater animal. It lives in the Amazon and the Orinoco rivers as well as in waterways located in Bolivia, Columbia and Peru. The river dolphin is smaller than other types of saltwater dolphins, and the species has excellent hearing. These dolphins must live in warm, shallow water areas because they have very little blubber. River dolphins suffer in captivity with few aquariums able to keep them alive.

Amazon river dolphins also generally become more pink as they age, which has led to the species becoming known as the ‘pink dolphin.’

• Also known as the pink dolphin: There are many competing theories on why the Amazon river dolphin tends to become more pink as it ages that you can discover below!

• Not one, but three species?: Scientists are currently divided on whether the Amazon river dolphin is actually one, two, or three different species. To see more about this ongoing debate, read our ‘species’ section below!

• Different bodies than ocean dolphins: Unlike ocean dwelling dolphins, river dolphins have a hump instead of a dorsal fin.

• Upside down swimmers: Amazon river dolphins will frequently swim upside down. Its believed the humps on their back rub across the river’s floor and help them locate prey.

The Amazon river dolphin is also called a boto or the pink river dolphin, and its scientific name is Inia Geoffrensis.

The animal’s common name comes from where it often makes its home and its skin color. The name boto is the one used by the natives. It is also a popular character in South American mythology. In legends, the animals have amazing musical skills and are seductive. They also love parties. Some myths claim that the dolphins can shapeshift into human form and have magical abilities.

There is considerable debate within the scientific community as to whether the Amazon river dolphin is actually one, two, or potentially even three different species.

The animal has conical-shaped teeth that they use to catch small fish and other prey. The river dolphin features a long nose that can measure up to 23 inches long, and this is about four times longer than the nose of ocean dolphins. The river dolphin has a two-chambered stomach, and they breath by emitting air through a blowhole.

The animals swim with great precision. Because river dolphins are extremely flexible, they can maneuver around rocks, tree trunks and other objects. They also have the ability to swim forward using one flipper while the other flipper paddles backward. This swimming method lets them make tight turns. River dolphins also like to swim upside down.

River dolphins have exceptionally large brains, and while dolphins are known for swimming in groups, river dolphins tend to spend more time alone or among small groups of two to four dolphins. You might see a bigger group of them in areas that are rich with food, but it’s less common with river dolphins.

The Amazon river dolphin doesn’t have a dorsal fin. Instead, it sports a modified hump. The animal makes its way through rivers and flooded areas using strong flippers and a tail fluke. Compared to oceanic dolphins, river dolphins swim slowly. Their top speed is around 35 miles per hour. The reason for this is that their neck vertebrae are not fused. This gives them more flexibility, but it means that they can’t swim as fast. River dolphins are able to turn their heads without shifting their bodies.

Like their ocean cousins, pink river dolphins are friendly and curious. They interact with humans frequently. River dolphins have unique ear adaptions to help them survive in their watery environment. Dolphins hear sound from their throats instead of from their outer ear to their inner ear. The animal’s ear is also acoustically separated from its head. Separating these two body parts are sinus pockets. The combination gives the animal enhanced directional hearing under the water. Dolphins use an organ called a melon to emit high frequency clicks. This allows them to produce bio sonar. They use it to orient themselves.

Dolphins are reliant on echolocation. The animal species uses echolocation so well that a river dolphin could survive even if it were blind. Echolocation lets the animal determine the size and shape of any surrounding item or object. River dolphins have small eyes, and they are unable to see well. Also, their eyes are on the sides of their heads. This means that their vision features two separate views instead of the forward view that people see.

Researchers believe that some types of river dolphins are blind while others just have extremely poor eyesight. A number of the animals are killed because they inadvertently come into contact with nets and fishing boats.

Pink Dolphin: Why Amazon River Dolphins Are Also Known as the ‘Pink Dolphin’

One of the defining features of Amazon river dolphins is they often turn pink. Scientists are still researching the reasons for this unique coloration, but a few theories stand out.

It’s important to note that most Amazon river dolphins are born a more gray, and males tend to become more pink as they age. In addition, this pink coloration normally covers parts of their body while areas of grey remain. It’s hypothesized that males with more pink coloration are better able to attract mates.

You’ll find them in Bolivia, Columbia, Ecuador, Brazil, Venezuela and Peru. The Amazon pink river dolphin also lives in the Amazon and Orinoco riverways and in the Araguaia River.

Amazon river dolphins have teeth that are similar to the molar teeth that humans have. Like people, the animals use their teeth to break up food before swallowing it. River dolphins aren’t picky about what they eat. The mammals will dine on turtles, shrimp, crabs and more than 40 different species of fish including piranhas.

Animals that prey on the river dolphin include large snakes, jaguars and caimans. However, once the species has passed adolescence they have few natural predators.

Human development and farming have had a major impact on the habitats of the river dolphin. These activities have impacted the ecology of the waterways. Human fishing is also threatening the species. Overfishing is a problem because it decreases the animal’s food supply. The dolphins also get caught in the nets.

Pollution is another threat to the Amazon river dolphin. Small gold mining operations cause mercury pollution, and this makes its way to dolphins through the food chain. River dolphins eat a lot of catfish, which dwell on the bottom of waterways where mercury generally accumulates.

Amazon river dolphins are endangered. The Brazilian Institute of Environment and Renewable Natural Resources has taken steps to protect the dolphin species. They’ve made it illegal for fishermen to kill the dolphins. The

In South America, spring is the rainy season. During this time, acres and acres of rainforest floods, turning into an enormous tree-covered sea. The water becomes deep enough for the river dolphins to swim amongst the trees. Mating season occurs when the water recedes, and the male and female dolphins are constricted to the river channels. The dolphin species is polygamous, meaning males mate with several females each year. However, females don’t mate every year. They mate every two to three years.

Female river dolphins are more attracted to males that are a brighter shade of pink. To impress the females, male river dolphins smack the water with bunches of grasses or branches in their mouths. Sometimes, they hold up a turtle to capture the attention of a female. When a female river dolphin becomes pregnant, she’ll carry the calf for 11 to 15 months. The animal species gives birth to just one calf. After a baby dolphin is born, it will nurse for over a year. Baby dolphins are often around 30 inches long, and they weigh around 22 pounds. Adult female dolphins usually have their calves from July to September. Once they’re born, babies remain close to their mothers for protection.

Sexual maturity is based on the dolphin’s size. When a female reaches 5.5 feet in length, she becomes sexually mature. Males reach the stage once they’re 7 feet long. In the wild, river dolphins live for an average of 12 to 18 years, but they can live for as long as 30 years.

The estimated river dolphin population is difficult to estimate because the dolphins live in remote, muddy waters, and lack a distinctive dorsal fin that makes spotting them easier. However, river dolphins are under threat.

For instance, the Araguaian river dolphin population is from 600 to 1,500 animals.

Amazon river dolphins are carnivores. They only eat meat.

Are River Dolphins Dangerous to Humans

Most of the time, dolphins are not dangerous to humans. In fact, the animals are super curious, friendly and generally approachable. They often have fun with humans by teasing them and seeking their attention. There are even accounts of the species protecting people from sharks or helping a lost person make his or her way back to land.The only time that dolphins are likely to harm humans is if they are agitated or provoked. If you come across a river dolphin and want to feed him or her, keep in mind that it might be prohibited.

How Do Dolphins Sleep?

Most dolphin species sleep by resting one hemisphere of their brain in what’s called slow-wave sleep. During this state, they stay alert enough to keep breathing and look out for predators. The Indus river dolphin sleeps differently. Since the animal lives in waters with powerful currents and a great deal of floating debris, the dolphin must stay alert to avoid becoming injured. To stay safe, the dolphin sleeps in short four to 60 second spurts.

Some are. Amazon river dolphins are born grey and turn varying degrees of pink throughout their life. Males tend to become especially pink as they age. It’s believed this pink coloration is the result of their aggressive behavior, with teeth marks from other males leading to pink scar tissue that eventually covers the majority of their body.