How Many Grizzly Bear Attacks Happen Per Year?

Dennis W Donohue/Shutterstock.com
Share this post on:
More Great Content:
An Absolutely Gigantic Moose Makes These Grizzlies…
See The Footage of The Rarest Bear…
Silverback Gorillas vs Grizzly Bears: Who Would…
Why Did Cave Bears Go Extinct?
5 Massive Bears Larger Than a Grizzly
Watch a Grizzly Drag a Moose Calf…

Grizzly bears are some of the most formidable predators in the world, and humans know to stay far away from them. At the same time, bears of all species know to stay away from humans and generally only engage with us when threatened. In these situations, bear attacks are a real possibility. Today, we are going to learn about grizzly bears and how often they attack, including the myths surrounding these animals.

How Many Grizzly Bear Attacks Happen Per Year?

Roughly 44 grizzly bear attacks occur worldwide each year, and this number seems to be on the rise.

Bear attacks are generally pretty rare, and fatal ones are even less common. Currently, the best data on the number of bear attacks each year comes from Nature, one of the most renown scientific journals in the world. Their researchers investigated grizzly bear attacks on humans between 2000 and 2015 across North America, Europe, and eastern Asia.

The total number of documented brown (grizzly) bear attacks during this time was 664. If you take that number and divide it by the total number of years recorded, we get an annual average of 44 attacks worldwide. To break it down further, North America had a 15-year total of 183 attacks, Europe had 291, and Asia had 190. Europe is the leader when it comes to brown bear attacks over this period, with an average of 20 attacks per year across the continent.

Why Do Bears Attack Humans?

The study published in Nature also went into detail as to the cause of the attacks.

For over half of the attacks, the humans involved were participating in leisure activities, like hiking, foraging, camping, fishing, and jogging. Another 24% of the attacks occured during outdoor activities related to work like logging, farming, and other related jobs. Incredibly, only 22% of all attacks were recorded during official bear hunts!

Bears don’t generally attack humans for no reason. In fact, the data backs this up rather nicely. Nearly all of the major bear attacks recorded were a direct result of a human accidentally engaging a female grizzly bear that also had cubs.

Mama bears are known to guard their cubs fiercely, and the data clearly supports this conclusion. Even more, it shows that the majority of attacks are because of a strong sense of self-preservation in relation to cubs.

Using these numbers, we can estimate that around 11.5% of grizzly bear attacks are fatal in the United States.

How Can You Avoid a Grizzly Bear Attack?

There are some practical things that humans can do to avoid a bear attack.

Firstly, people should recognize when they are in grizzly bear country. In the United States, grizzlies primarily live in Alaska, although a small number of bears inhabit the tri-state area of Idaho, Wyoming, and Montana. Black bears, however, live throughout most of the west coast, all across Appalachia, Florida, New England, and more.

If you are in bear country, the best thing you can do is stay loud. Talk, sing, or occasionally say something loudly in order to let a bear know you are in the area. You really don’t want to surprise a bear, and making sure they always know where you are is important for helping them avoid you.

If you see a female bear or cubs, immediately leave the area without panicking. Don’t approach or move toward bear cubs for any reason ever. Don’t run, but leave without establishing yourself as a threat to the cubs and notify local forest authorities.

While hiking or doing other leisure activities, having a leashed and well-trained dog seems to be a strong deterrent for bear attacks. Unleashed dogs, on the other hand, have the opposite effect. In Alaska, for example, dogs have helped terminate attacks. However, in other cases, dogs are known to have initiated the attack.

Finally, make sure that you are clean and follow proper food storage protocol when outside. Food attracks bears, and following the correct protocols can ensure you don’t wake up to a bear attack over a couple of protein bars.

Discover the Oldest Zoos in America 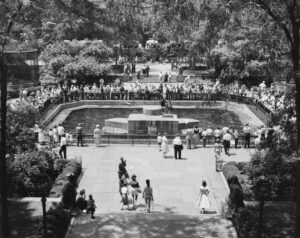