Everything I Do/Shutterstock.com
Share this post on:
More Great Content:
What Do Orangutans Eat?
Are Orangutans Dangerous?
Watch an Eagle Attack A Trespassing RC…
Discover the One Place on Earth that…
What Kills Bed Bugs Instantly?
Watch a Fierce Grizzly Battle Over Whale…

Several striking orange animals populate the wild. But none are as closely related to humans as the orang-utan. Humans share 97% of our DNA with this intelligent primate. This is close behind the chimpanzee and bonobo. Amazingly, orang-utans display complex emotions and even use tools! But how many orang-utans are left in the world? And can we preserve them in the years to come?

What is an Orang-utan?

Orang-utans are primates in the family Hominidae. This group is otherwise known as the great apes. They share this family with gorillas, chimpanzees, bonobos, and humans. Unlike other great apes, orang-utans are mainly solitary creatures.

The name orang-utan means “man of the forest.” This species is also known as the red ape for its shaggy orange hair. A curious feature is its arms’ length, which is greater than the length of its legs. This makes the orang-utan an excellent climber.

There are 3 species of orang-utans:

The scientific name for the Bornean orang-utan is Pongo pygmaeus. It is the largest of the 3 orang-utan species. It inhabits the tropical jungles of Borneo and is further divided into 3 subgroups:

Unlike Sumatran orang-utans, this species often descends to forage on the ground. Socially, Bornean orang-utans are not as close-knit.

The scientific name for the Sumatran orang-utan is Pongo abelii. It lives on the island of Sumatra. This species spends most of its time in the trees and only rarely descends to the ground. Sumatran orang-utans have abundant facial hair. Though mostly solitary, they sometimes form close social bonds.

The scientific name for the Tapanuli orang-utans is Pongo tapanuliensis. They are the smallest in size of the 3 subspecies. They were only recognized as a separate subspecies in 2017. They also live on the island of Sumatra in the isolated Northwest. Their heads are smaller, and their faces flatter than those of their Sumatran cousins.

How Many Orang-utans Are Left in the World?

Approximately 120,000 orang-utans are left in the world. The Bornean orang-utan is the most numerous of the 3 species, with 104,700 individuals. Next is the Sumatran orang-utan, with a total population of nearly 14,000. The smallest group of all is the Tapanuli orang-utan, with only 800 members. This makes it the most endangered of all the great apes. About 900 orang-utans live in captivity.

Scientists estimate that there were as many as 230,000 orang-utans a century ago. Unfortunately, that number has been cut almost in half.

Where Do Orang-utans Live?

Wild orang-utans live exclusively on the islands of Borneo and Sumatra. Because of their isolated environment, they have no way to access other parts of the world. However, they were once native to various Indonesian islands.

Orang-utans of all kinds inhabit tropical lowland rainforests. They prefer those in river valleys and floodplains. They live mostly in the trees, only occasionally coming down to forage for food. Areas of high humidity and abundant water ensure an abundance of fruit. Swamps and thick undergrowth render their habitats largely inaccessible.

Are Orang-utans Dangerous to Humans?

Generally, orang-utans are not dangerous to humans. There are no known incidents of orang-utans killing people. They are peaceful, placid primates that rarely engage in violence. Orang-utans prefer loud calls rather than shows of force to express dominance at mating time.

There have been a few incidents of orang-utans biting zoo workers or visitors, but these are isolated incidents. Scientists working with orang-utans in the wild consider them far less threatening than chimpanzees that can be aggressive.

Orang-utans are omnivores, though they tend toward a frugivorous diet. They eat mostly fruit, including mangoes, figs, lychees, mangosteens, berries, and durians. They also consume other plant matter like leaves and bark. From time to time, they eat eggs, insects, and small animals.

Orang-utans don’t drink much water for their size. This is because they consume much of their daily required intake in their food. When drinking from springs or tree holes, they use their hands to pour water into their mouths.

Because of their size, orang-utans don’t have many predators. Tigers, clouded leopards, and crocodiles occasionally attack and eat them, which is why they usually remain above the ground. Humans also hunt orang-utans.

Orang-utans reproduce slowly, giving birth to a single infant once every 8 years or so. The gestation period lasts for 9 months. The mother prepares a special nest high above the ground for the offspring. They wean their young after 3 years, but the infant remains with its mother for another 4-5 years. During this time, she teaches it the skills necessary for survival. Females only give birth up to 3 times over the course of their life.

Orang-utans also take a long time to reach sexual maturity, between 12-15 years. They can live as long as 35-50 years in the wild and up to 60 years in captivity. Because the whole process of reproduction takes so much time, this species cannot repopulate quickly. Any loss to the population has a serious impact.

About 900 orang-utans survive in captivity, mostly in zoos. They make popular and peaceable attractions. Many orang-utans in zoos are overweight with insufficient muscle mass due to their indolent lifestyle. However, they are also more curious than their wild counterparts.

Sadly, the exotic pet trade often targets orang-utans. Hunters capture adults and their young for use as pets or in zoos, sometimes killing mothers to get at their infants.

The IUCN lists orang-utans as critically endangered. All 3 subspecies carry this label. Humans and habitat loss kill at least 2,000-3,000 orang-utans every year.

What threatens orang-utans? Human hunting remains a serious problem. Hunters frequently kill orang-utans for their meat. Farmers also hunt them to prevent them from destroying crops. This can become a problem when natural food sources are in short supply. Diminishing habitats also mean orang-utans and humans clash more often. Deforestation threatens this species on a daily basis.

Humans can protect their orang-utan cousins by preserving their habitat and allowing them to live at peace in the wild. 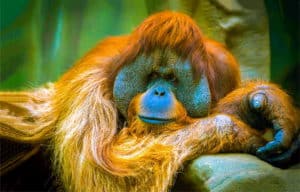