Has 32 teeth including fang-like canines!

Click through all of our Chimpanzee images in the gallery. 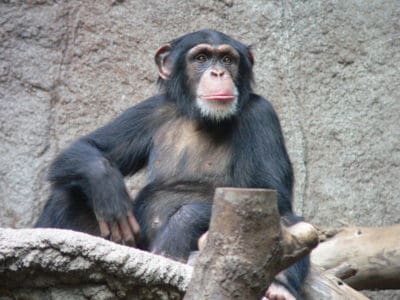 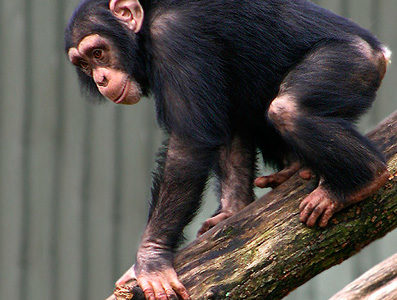 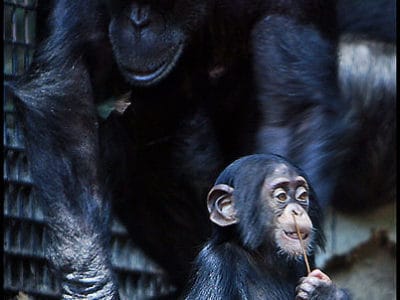 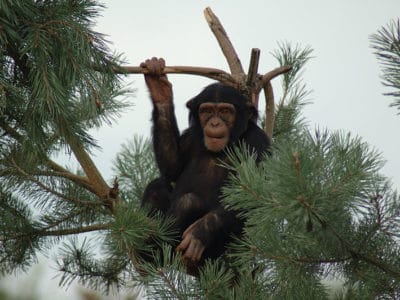 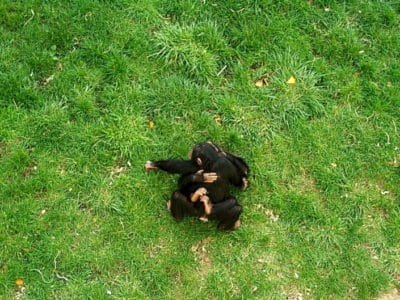 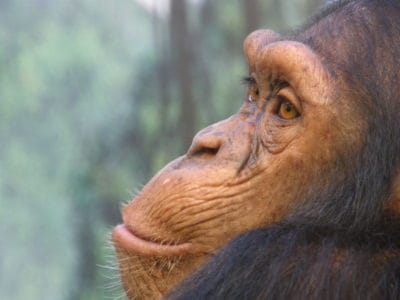 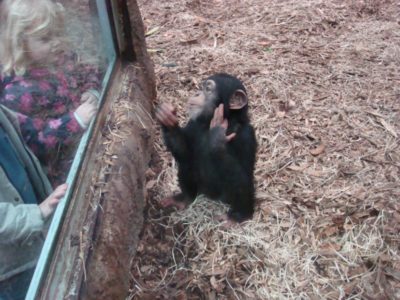 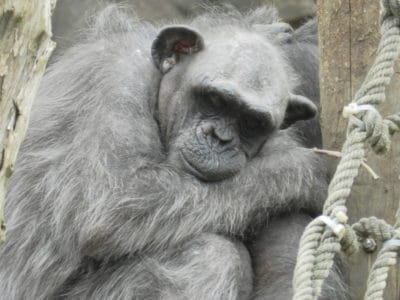 View all of the Chimpanzee images!

The Chimpanzee is a species of ape that is natively found in a variety of different habitats in western and central Africa. Closely related to other great apes including Orang-Utans and Gorillas, the Chimpanzee is an animal that is also very closely related to Humans as we share 98% of the same DNA. They are thought to be the most intelligent animals on the planet after people and are not only known to show emotion but they are also great problem-solvers and are even known to not just use, but also make tools to help them to survive more successfully in their surroundings. There are two different species of Chimpanzee which are the Common Chimpanzee and the smaller Bonobo (also known as the Pygmy Chimpanzee) which has a limited distribution south of the Congo River. However, despite being highly adaptable and intelligent creatures, Chimpanzees are severely threatened in their natural habitats today, mainly due to hunting for bushmeat and deforestation.

Chimpanzees are large primates that have long yet sparse black hairs covering their bodies with the exception of their face, palms and the soles of their feet. Their hair not only allows them to remain warm in areas at higher altitudes but it also provides their skin with some protection from the sun. The hairless parts of their bodies are light to dark brown in colour depending on the age of the individual (their skin darkens as they mature). They have large ears that give them excellent hearing and a heavy brow-ridge over their eyes. Like other great apes, Chimpanzees are animals that have good sight and are able to see in colour, while their forward facing eyes allow them to focus on a single object clearly. They have long fingers and an opposable big toe that helps them to grip onto things, with their arms also being longer than their legs which enables them to move around on all fours which is known as knuckle-walking. Chimpanzees have 32 teeth which are very similar to those of Humans to help them to not just grind up plant matter but their longer canines also help to bite into flesh.

Chimpanzees are found throughout 21 different countries in western and central Africa where they are known to inhabit a variety of different regions from the tropical, humid rainforests to the dryer and more arid regions of the savanna and open woodlands. They are excellent climbers and rely heavily on the surrounding trees not just for protection from predators but also to find food and places to nest during the night. Chimpanzees have been severely affected by the loss of much of their natural habitat as forests are cleared to make way for agriculture or to cut down the trees as tropical timber. With groups being pushed into smaller and smaller ranges the competition for food and nesting sites increases and conflict can occur both between different groups and amongst individuals who reside in the same community.

Chimpanzees are highly sociable animals that spend the daylight hours feeding, playing and grooming with other members of the group. Groups (also known as communities) can range in size from 15 to 120 individuals depending on the habitat and the amount of food available. They are highly territorial and do not tolerate outsiders in their midst, often killing an individual that is from another group. Chimpanzee groups have incredibly complex social structures with the dominant males not necessarily being the strongest individuals but more the ones that can rally together the most supporters. Chimpanzees make nests in the trees at night by folding over branches to provide them with a safe platform on which to sleep, with a new nest being constructed every day. Although they spend a lot of time both sleeping and eating in the trees and do move about by swinging from branch to branch, most travel is done using a network of paths on the ground using their knuckles to balance on.

Although bonds within the group can last for many years, there are no long-term bonds between males and females as far as reproduction is concerned. Female Chimpanzees can give birth at any time of year to a single infant that is born after a gestation period that lasts for around eight months. After birth, the infant clings onto its mother’s fur and will remain with her solidly for the first few years when the young begin to get more adventurous and starts to explore their surroundings increasingly more on their own. Young Chimpanzees learn the skills they need to survive by watching their mother including what to eat, how to make tools and nest building, along with playing with other young individuals to practise both their grooming and wrestling skills. Females are thought to be able to reproduce at 13 years of age where males seem to develop slightly later and breed when they are about 16 years old.

The Chimpanzee is an omnivorous animal that eats hundreds of different types of food. The bulk of their diet is comprised of seasonal fruits, seeds and flowers that are picked from the trees, along with insects such as ants and termites that are extracted from their nests using a stick. However, they are known to eat larger prey too and when working together, sub-groups are able to kill monkeys and birds and have even been known to successfully hunt small antelope. Chimpanzees are the only animals (apart from Orang-Utans and Humans) that don’t just use tools but also make them. They are known to strip the leaves and twigs off branches which are then inserted into a termite mound, where the termites crawl onto the branch and the Chimpanzee then licks them off. They are also known to use stones as hammers to open nuts and have even been known to use chewed leaves as a sponge to soak up water, which is then drunk from the leaf.

Due to the fact that they spend so much time in the trees, Chimpanzees are not at great risk from many of the large predators that are found on the ground. There are however, animals that can live both on the ground and in the trees with Leopards being one of the biggest natural threats to these animals. Chimpanzees are also preyed upon by large species of snake and can be killed by other primates (including other Chimpanzees). Infants are at greater risk than their parents as they have even been known to be captured and eaten by Baboons that share their ranges. The biggest threat to Chimpanzees though is people that have not only hunted them for their meat but have also wiped out vast areas of their natural habitats, meaning fewer trees to eat and rest in.

Chimpanzees are highly sociable and spend much time every day grooming one-another. Not only does this keep them clean and free from parasites but it is also thought to be relaxing for them and strengthens social bonds within the group. Chimpanzees are known to make 30 distinct calls with which they communicate with other members of the group, including the pant-hoot. This series of shrieks and roars is the most common noise for an adult Chimpanzee to make and can be heard up to 2km away. Although they do make a variety of different sounds, most communication is through facial expression. They have very flexible lips which are curled apart to produce a “smile” that actually signifies fear when they are either angry or feel threatened. Chimpanzees are known to be one of the world’s most intelligent animal species and cannot only remember things but are also able to recognise themselves in a mirror.

Chimpanzees and Humans are thought to share a common ancestor that lived around 8 million years ago but Chimpanzees have been severely affected by their closest relatives. People have hunted and killed Chimpanzees for bushmeat which still continues today (despite being prohibited), with some populations having also been devastated as they inhabit regions which have been in long periods of civil war. However, it is the loss of their natural habitats which is having the worst affect on Chimpanzees as they need the trees around them to survive. Despite the lack of care for them in the wild, the human-like nature of Chimpanzees has fascinated people for years both in science and in zoos where there are always people crowding around, enjoying watching them interact. A great deal of what we now know about Chimpanzees is thanks to the work of Jane Goodall who spent 30 years studying them in the wild in the Gombe National Park, Tanzania.

Today, the Chimpanzee is listed by the IUCN as an animal that is Endangered in its natural environment and therefore faces the threat of extinction in the near future if nothing is done to change the situation. It is estimated that there could be as few as 100,000 individuals remaining in Africa, with the population having thought to have declined rapidly over the past 30 years. With the level of deforestation continuing to increase, Chimpanzees are being pushed into smaller and more isolated regions of their once vast natural range leading to further population declines in many areas of Africa.

Are Chimpanzees herbivores, carnivores, or omnivores?

Chimpanzees are Omnivores, meaning they eat both plants and other animals.

What Kingdom do Chimpanzees belong to?

Chimpanzees belong to the Kingdom Animalia.

What class do Chimpanzees belong to?

Chimpanzees belong to the class Mammalia.

What phylum to Chimpanzees belong to?

Chimpanzees belong to the phylum Chordata.

What family do Chimpanzees belong to?

Chimpanzees belong to the family Hominidae.

What order do Chimpanzees belong to?

Chimpanzees belong to the order Primates.

What type of covering do Chimpanzees have?

Chimpanzees are covered in Hair.

What genus do Chimpanzees belong to?

Chimpanzees belong to the genus Pan.

Where do Chimpanzees live?

In what type of habitat do Chimpanzees live?

What are some predators of Chimpanzees?

Predators of Chimpanzees include leopards, snakes, and humans.

How many babies do Chimpanzees have?

The average number of babies a Chimpanzee has is 1.

What is an interesting fact about Chimpanzees?

Chimpanzees have 32 teeth including fang-like canines!

What is the scientific name for the Chimpanzee?

The scientific name for the Chimpanzee is Pan troglodytes.

What is the lifespan of a Chimpanzee?

Chimpanzees can live for 50 to 60 years.

What is a baby Chimpanzee called?

A baby Chimpanzee is called an infant.

How many species of Chimpanzee are there?

There are 2 species of Chimpanzee.

What is the biggest threat to the Chimpanzee?

The biggest threat to the Chimpanzee is habitat loss.

What is another name for the Chimpanzee?

The Chimpanzee is also called the common chimpanzee.

How many Chimpanzees are left in the world?

How fast is a Chimpanzee?

A Chimpanzee can travel at speeds of up to 25 miles per hour.

How to say Chimpanzee in ...