Uses homemade tools to help with eating and drinking!

Click through all of our Tapanuli Orang-utan images in the gallery. 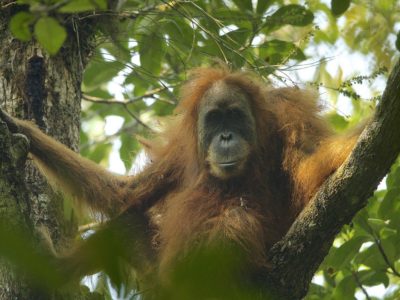 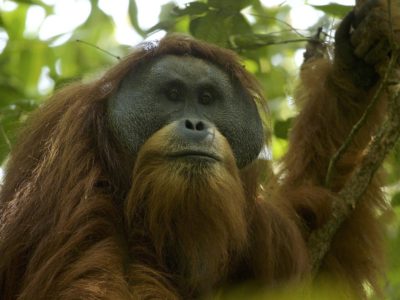 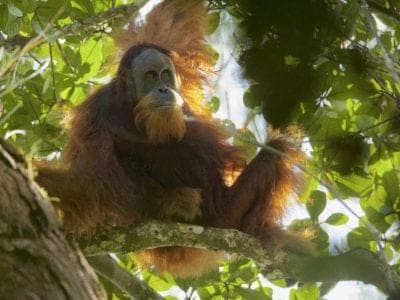 View all of the Tapanuli Orang-utan images!

Tapanuli Orang-utans are only found in a small and remote part of northwestern Sumatra. Found inhabiting the dense tropical and subtropical broadleaf forests in South Tapanuli, Tapanuli Orang-utans are known to exist in the mountains and can be found between 300m and 1,300m above sea level. The entire population of Tapanuli Orang-utans resides in a small, isolated pocket of the mountainous forests just south of Lake Toba that covers a range of just 1,000 square kilometres, and it is because of this that they are so threatened in their natural environment. With ongoing deforestation in the region to clear land for expanding human settlements, logging and to make way for palm oil plantations, their natural range is becoming increasingly smaller and more fragmented (something which is the same for both Sumatran Orang-utans and Bornean Orang-utans), and has devastating effects on populations as there are fewer trees to not only live in but also makes it harder for them to find food.

Unlike the great apes found in Africa that exist in communities with a number of individuals, all three Orang-utan species including the Tapanuli Orang-utan are more solitary animals that are only really seen together when a mother is raising her young. One theory about why Tapanuli Orang-utans are not as sociable as Africa’s great apes is just the sheer amount of time they spend both finding food and then eating. Tapanuli Orang-utans spend most of their lives in the trees as historically they would have been threatened on the ground by large predators including Sumatran Tigers. Tapanuli Orang-utans build nests high in the forest canopy to sleep in during the dark nights which they do by folding leaves over until they have made themselves a soft and secure bed. Like the other two Orang-utan species (and the other great apes), Tapanuli Orang-utans are known to use homemade tools to help them when both eating and drinking, such as using sticks to collect small insects onto and leaves as cups to collect water to drink from. The exact use of tools varies a surprising amount between Orang-utan populations in different areas indicating that these skills are actually taught to them by their mothers rather than something that they simply inherit.

Tapanuli Orang-utans only come together really to mate. Males have loud long-calls that boom through the forest and can be heard for up to 1km through the trees. These calls are used to attract the attention of females and after mating and a gestation period that lasts for 9 months, the female gives birth to a single infant. Baby Tapanuli Orang-utans cling tightly onto the long hair of their mother and remain with her for up to 7 years as she teaches her infant how to survive in the forest, passing on vital information about which plants are safe to eat, how to build nests and how to utilise tools to aid them in their daily lives. Tapanuli Orang-utans (along with Bornean and Sumatran Orang-utans) are one of the most slowly-maturing animals in the world and are not able to reproduce themselves until they are between 12 and 15 years old. With female Tapanuli Orang-utans having a maximum of three offspring during their lives, it is thought to be one of the contributing factors to their sharp levels of decline in recent years.

Tapanuli Orang-utans are omnivorous animals which means that they hunt for and consume both plants and other small animals, primarily insects and small reptiles. Despite the fact that they do hunt for insects, Tapanuli Orang-utans survive on a heavily fruit-based diet with favourites including mangoes, lychees, durian and figs both ripe and unripe. Due to their large size and the fact that exist primarily by eating fruit, Tapanuli Orang-utans most spend much of the day searching for fruit and then eating to gain enough of their nutrition and although they are known to drink water, like the other Orang-utan species they gain most of the moisture they need from their food. In areas where there are high yielding fruit trees, Tapanuli Orang-utans can be seen around other individuals as there is no competition for food when there is an abundance of it.

Historically, Tapanuli Orang-utans would have been under threat from being preyed on by larger predators on the ground such as Sumatran Tigers and large snakes. However, with deforestation causing severe habitat loss throughout the region the population numbers of these large predators has drastically declined. Humans are the biggest threat to Tapanuli Orang-utans as since their arrival on Sumatra, they have hunted them for meat. With the interest from zoos around the world in exhibiting exotic animals increasing, the threat to Tapanuli Orang-utans shifted from being killed as bushmeat to being captured to be sold on the global market. Due to the large size of the adults though, infants were often captured after their protective mother had been killed. Although the illegal capture of them still continues, the biggest threat to Tapanuli Orang-utans is habitat loss caused by deforestation for growing human settlements but more drastically from logging of the tropical timbers and to clear land to create palm oil plantations.

Like both Bornean Orang-utans and Sumatran Orang-utans, the Tapanuli Orang-utan is know to create mental maps throughout their natural ranges in the forest of where to find the best fruits and at what time of year. This clever technique enables Tapanuli Orang-utans to keep roaming through the tropical, moist forests but without using unnecessary energy trying to find new food sources. Although the exact tool skills used appears to depend on individual populations, it is not only to obtain food that Orang-utans have developed tools for but they are also known to use small leaves placed on the sensitive skin on their hands and feed to protect them from prickly vegetation and even use large leaves as umbrellas to prevent them from getting too drenched in the tropical downpours.  One of the subtle but key differences between the Tapanuli Orang-utan and the Sumatran Orang-utan (with the nearest population residing just 100km away) is the frequency of the booming loud-call of the males, which is of a higher pitch in Tapanuli Orang-utans.

As with the other two Orang-utan species and indeed, numerous larger animals throughout South-East Asia, Tapanuli Orang-utans have been heavily affected by the growing presence of people throughout their natural range. The capture of young Tapanuli Orang-utans and the killing of the adults for their meat has had devastating consequences to this remote population of individuals but does not even begin to compare to the effect that deforestation of their natural habitats has had on Orang-utan populations both in Sumatra and Borneo. Although it seemed like deforestation in Indonesia was beginning to slow, the boom within the palm oil industry gave rise to large areas of forest and ancient peat-lands being cleared to turn into plantations.

Despite the fact that Tapanuli Orang-utans were only named a new species in 2017, they were immediately classified as an animal that is Critically Endangered in the wild by the IUCN. With an estimated 800 Tapanuli Orang-utans thought to exist in such a tiny and remote pocket of northwestern Sumatra they are severely under threat and could be extinct from the wild in the very near future.

Tapanuli Orang-utans are Omnivores, meaning they eat both plants and other animals.

How fast is a Tapanuli Orang-utan?

A Tapanuli Orang-utan can travel at speeds of up to 2.7 miles per hour. 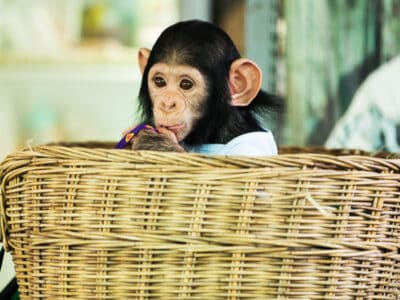