Guppies are native to South America but now live worldwide.

Many guppy facts abound, including these fish living in aquariums worldwide. Notably, these beautifully colored little fish are an aquarium favorite because they are easy to look after and reproduce in significant numbers. They have also earned the name ‘million fish’ because of their ability to produce so quickly in such large quantities. These little fish may seem simple because of their size, but they have many unknown, incredible facts.

Guppies come in various colors and fin shapes, prompting another nickname, the ‘rainbow fish.’ Their colors include orange, red, white, black, blue, and green. Wild male guppies have colored scales, while wild female guppies have a pale color and are much duller. But, due to selective breeding, the aquarium guppies can be colorful and have beautiful fin shapes no matter their sex.

For example, the different tail shapes include those with the lyretail, fantail, flag tail, round tail, and more. Male guppies in aquariums have bodies with full colors that sometimes also have different patterns or colors across their bodies. They also have colorful pectorals, dorsal, and tail fins. Breeders now focus on creating female aquarium guppies with colored tails and dorsal fins. However, their bodies will still be a neutral color.

2. Guppies Are Named After the Researcher That Discovered Them

In 1866, Robert John Lechmere Guppy, a researcher and a geologist, discovered the fish in Trinidad. The National Institute of Higher Education, Research, Science and Technology confirmed the discovery. But guppy was not the first person to discover these colorful fish. W.C.H. Peters initially found guppies but overlooked them and failed to receive credit for the find.

3. Guppy Fact: There Are Different Species

The species have different scale colors, patterns, and tail shapes. Some of the most common and well-known guppy species are:

4. Guppies Can Adapt To Different Environments

These colorful fish are native to South America. They are commonly found in the U.S. Virgin Islands, Brazil, Jamaica, Antigua, Barbados, and Venezuela. Now, these fish are all over the planet except Antarctica. They can live in freshwater and brackish water but prefer shallow freshwater, pools, and streams. But, they can also be found worldwide in tropical and subtropical waters and in domestic aquariums as pets.

Another fun fact is that these little fish are opportunistic feeders and eat almost anything that fits in their tiny mouths. But the diets of wild and domestic guppies vary. Where wild guppies mainly eat insects, algae, and larvae, domesticated guppies thrive on vegetable flakes, spirulina, algae tablets, brine shrimps, and micro worms. Some guppy owners have even fed them egg yolk and beef hearts which they have gladly eaten up.

6. Fact: Guppies Have Been Used To Fight Malaria

Using guppies to fight malaria may seem impossible because it is incredible that these small fish can prevent diseases. However, it’s a fact that people contract malaria through mosquitoes. It’s also a fact that guppies have been used to decrease mosquito populations. People introduced these fish into rivers in Asia and Africa to eat the mosquito larvae to regulate malaria. Mosquito larvae are roughly 0.1 inches, making them an excellent bite-sized snack for guppies.

7. Guppy Fish Facts: They Have Also Been Used To Test Drinking Water

Developing or third-world countries like India tend to experience many clean drinking water issues. After floods and natural disasters, water sources often become contaminated or compromised. Dirty drinking water can lead to diseases and even death. In many cases, people in the area do not have access to laboratory equipment or water testing kits. That’s where the guppy becomes invaluable. People in impoverished regions have started testing drinking water by introducing guppies into the water source. If the guppies survive for several days, the locals can accept that the water is safe for human consumption.

Most fish lay eggs, but guppies do not. Female guppies reach sexual maturity at three months. The males pursue the females, and once they mate, the female can store the male’s sperm for up to eight months. Once she falls pregnant, she will give birth to anything from 20 to 60 fry after a month of gestation. In some cases, the female will give birth to 100 to 120 guppies, and this can happen every month, all year round. The fry can swim and fend for themselves as soon as they are birthed. But they may not be safe around their parents as guppies are cannibalistic from time to time. When they survive, guppies have a relatively long life, between one and three years. In some cases where guppies live in optimal conditions, they can survive for as long as five years.

9. Guppies Can Survive Without Food for Long Periods

Their tiny size makes many believe that these fish must often eat to stay alive, but this is not true. Guppies can survive in a tank for a week without eating. Guppy owners have even found that they can survive longer than this, over two weeks, without food.

Larger fish often eat guppies. Examples of these are blue acara and pike cichlid. Some wild birds, like kingfishers, also feast on these little fish. Pet owners should be careful about pairing fish species in aquariums. Guppies get along well with other fish but may fall prey to aggressive species in the tank. As noted, guppies are colorful, making them a target for predators. But, they also have a defense mechanism. When attacked, guppies change their irises from silver to black. The guppy can escape while the predator fixates on what it thinks is the guppy’s head.

Up Next – Fabulous Fish Facts 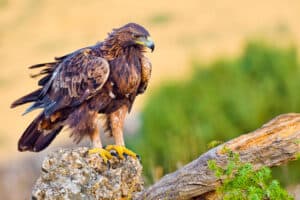