Megamouth Shark vs Great White Shark: What Are The Differences?

The megamouth and great white sharks are some of the largest sharks patrolling the ocean. The great white has a reputation all to its own, but the megamouth is significantly rare and much less known. With a name like “megamouth,” one might think these sharks are huge predators, but they would be wrong! Today, we are going to explore the differences between these sharks and learn a bit about what makes them unique. Megamouth Shark vs Great White Shark; why are they special?

Comparing a Megamouth Shark and a Great White

Although close in size, little else between these sharks is as similar. One of the biggest differences between the two is diet. Megamouth sharks, despite what their looks would preclude, are filter feeders. They only eat plankton, krill, and anything small enough to get trapped in their mouths. Great whites, on the other hand, are well-known predators. They prefer large prey like seals, sea lions, and large fish.

Let’s look at these differences, plus a few more, in detail below!

Great white sharks are the largest predatory sharks in the ocean (if you don’t count the Greenland shark). These large predators can regularly reach 11-20 feet long and weigh 4,200-5,000 lbs. The largest megamouth sharks are longer, but the average great white is probably a bit heftier than the megamouth shark.

Great white sharks are famous for their diet of large creatures. These apex predators prefer things like seals and sea lions but can be pretty variable when they need to be. They have been seen eating large fish, rays, and even whale carcasses.

Megamouth sharks belong to a small group of sharks that filter-feed. These sharks inhale large amounts of water and run it over specialized pads near their gills. The pads trap small creatures like krill, plankton, and crustaceans. Only two other sharks are documented to be filter feeders, the whale shark, and the basking shark.

The megamouth shark is a widespread shark that lives in most temperate oceans across the world. They are extremely rare to see due to the depths they usually stay live in. These sharks are not found in polar waters.

Great white sharks live in all the world’s oceans, save for the polar regions. They generally prefer waters between 54 and 75 °F and with plenty of large prey.

Great whites are epipelagic sharks, meaning they reside in the uppermost layer of the ocean. Since they feed on seals and sea lions, they usually prefer regions with high population density like California, South Africa, and Australia.

The megamouth shark is known as one of the deepest-dwelling sharks around. They feed in vertical pillars that sometimes take them as deep as 15,000 feet. The depths they usually reside in make them extremely rare to witness, with less than 100 specimens ever found.

Great whites are well-known for their attacks, despite them being rarer than most people realize. The great white has the record for most attacks on humans. There have been a total of 354 attacks by great whites throughout documented history.

The megamouth shark is a filter feeder and doesn’t prey on large creatures. As such, they have never attacked humans, and no accidental bites have occurred.

Discover the Highest Point in Montana 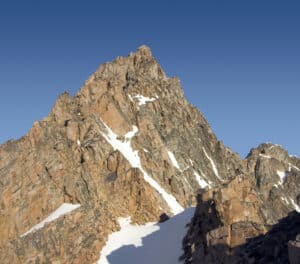