What Are Solar Flares, And What Causes Them?

The sun might seem like a constant, never changing presence in our lives. And, in most ways, that’s true. But, the sun doesn’t always emit the same amount of light and energy. In fact, these fluctuations are common enough that we have a name for them: solar flares.

The sun produces a huge amount of energy, more energy than the Earth could ever use. But, that energy has to come from somewhere. Here, we’ll not only answer the question: what is a solar flare?, we’ll also find out how the sun gets its energy. We’ll discover the layers of the sun, where exactly solar flares occur, and what causes them.

Finally, we’ll explore a few of the effects that solar flares have, particularly as they relate to Earth, and to humans. We’ll find out how solar flares affect the electromagnetic system of our planet, and whether or not they’re dangerous to life on Earth.

The Sun: It has Layers!

Like the Earth, the sun has several layers. Additionally, it has several layers of the atmosphere, each a little different from the last. Let’s take a look at where the sun gets its energy, and where exactly solar flares occur.

At the center of the sun lies the core. The core is the hottest part of the sun, averaging around 28,000,000 degrees Fahrenheit. And, it’s hot for a reason. Intense gravity in the core creates pressure so strong that hydrogen atoms slam into each other hard enough to create a new element: helium. This process is called nuclear fusion, and it’s what powers the sun, and, by consequence, the Earth.

The final zone of the sun is known as the convection zone. This zone is not a solid, it’s actually made up of plasma. The plasma transfers heat to the “surface” of the star much like a pot of boiling water. The temperature here sits at about 4 million degrees Fahrenheit.

Beyond the plasma surface of the sun lies the photosphere. This is the atmospheric layer directly overlying where sunspots and solar flares occur. The photosphere is much cooler than the convection zone; it averages around 10,000 degrees. This atmospheric zone is where most of the light and heat we receive on Earth comes from. Sunspots are visible to scientists because they’re cooler than the surrounding areas, and therefore appear darker.

Following the photosphere is the chromosphere. The chromosphere extends about 200 miles beyond the plasma surface of the sun. This layer averages between 7,200 and 11,000 degrees Fahrenheit.

The final layer of the sun’s atmosphere is known as the corona. The corona extends for thousands of miles, radiating heat and light out into the universe. You might think the corona is the coolest part of the sun, but it’s not. Temperatures in the corona hover around 1.8 million degrees Fahrenheit, far hotter than the temperature in the chromosphere or photosphere.

Now that we know how the sun gets its energy, and where, let’s learn the answer to the big question: just what is a solar flare?

Solar flares occur at the sun’s plasma surface and radiate out into the atmosphere. They occur in highly active areas with strengthened magnetic fields. Interestingly, solar flares generally happen where there are also a lot of sunspots. In simple terms, a solar flare is a burst of powerful, localized, electromagnetic radiation from the sun.

Once released, these flares of electromagnetic radiation radiate away from the sun at the speed of light. That means that, if a solar flare occurs on the side of the sun facing the Earth, it hits the Earth as it occurs.

What do Solar Flares do to Humans?

As massive bursts of electromagnetic energy, solar flares might seem a little scary. What if all that energy slams into the Earth, can it hurt you? Thankfully, the answer is no.

Solar flares may be impressive, but the energy that they radiate does not penetrate the Earth’s atmosphere; it never reaches the surface of the Earth. What solar flares can do, however, is disrupt radio communication here on Earth. They do this by affecting the Earth’s ionosphere, which is what our high-frequency radio waves depend on to communicate sound.

How Often do Solar Flares Hit the Earth?

Now that we’ve answered what a solar flare is, let’s learn a little more about how often they happen. Solar flares are not a constant. In fact, they follow the sun’s 11-year cycle of activity. At the outside of the cycle, known as the solar minimum, there are very few solar flares and little activity. But, on the other end of the cycle, during the sun’s most active time, the number and size of solar flares reach their zenith. So, around every 11 years, the sun releases more energy from solar flares than it has in the previous ten years.

How Much Energy does the Sun Produce? 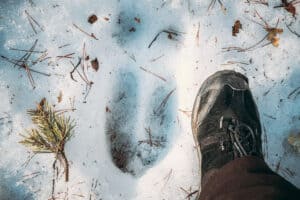