What Do Dinosaurs Eat?

Written by Becky Mathews
Updated: October 6, 2022
© iStock.com/Sergydv
Share this post on:
More Great Content:
7 of the Largest Prehistoric Animals Ever…
Discover the 8 Smartest Dinosaurs Ever to…
Meet Every Dinosaur Featured in Jurassic World…
Top 10 World’s Largest Dinosaurs Ever
9 Dinosaurs With Long Necks
Meet the Largest Carnivorous Dinosaur in History…
↓ Continue Reading To See This Amazing Video

In the ancient world of dinosaurs there were fast, flesh-eating carnivores, enormous long-necked herbivores, and ‘I’ll eat anything’ omnivores all vying for resources. Let’s take a look at these extinct animals to find out what they ate and how they found it before the doomed asteroid hit.

What Do Dinosaurs Eat?

Dinosaurs eat plants, meat, eggs, insects, and fish. These extinct creatures consumed a huge variety of different food from abundant plant life to other dinosaurs, but what they ate depended on how big they were and the available resources.

A dinosaur diet is similar to today’s animals. Like our lions, the T-Rex ate flesh and like our cows, Stegosaurus grazed on plants. Of course, the omnivores ate a bit of everything like squirrels and dogs! Let’s take a closer look.

Scientists think the majority of dinosaurs were plant-eaters but we can’t get away from the famous T-Rex and its Jurassic World man-eating tendencies! Thankfully, humans and dinosaurs didn’t co-exist. T-Rex and similar carnivores like Allosaurus preyed on other dinosaurs and scavenged carcasses millions of years before we evolved.

Like our current predators, carnivorous dinosaurs had long curved teeth and hunted easy-to-catch old, young, or injured dinosaurs first. Some species like the Velociraptor hunted in packs like our modern-day lions, so a social structure and a communication form were important features in their diet.

Fish-eating piscivore dinosaurs like Spinosaurus, Baryonyx, and Suchomimus had a dolphin-like snout and pointed serrated teeth. They specialized in fish for dinner catching prehistoric sea creatures from river banks. Palaeontologists think they may have been good swimmers too, but we can’t tell for sure.

Another type of dinosaur that ate fish were large flying reptiles like pterosaurs. Pterodactyls had hooked claws and serrated teeth which they used to grab unsuspecting fish from high above.

What Did T-Rex Eat?

Tyrannosaurus Rex is the most famous dinosaur and most of us know it was a carnivore. But what did T-rex eat?

Scientists say T-Rex, which translates to ‘the king of the tyrant lizards’, ate herbivorous dinosaurs including Stegosaurus, Edmontosaurus, and Triceratops, hunting them at speeds of 40 kilometers an hour!

It’s likely they also ate omnivores and other carnivores too. T-Rex was not a picky eater, it would hunt, scavenge and steal to maintain its huge body mass. Palaeontologists think T-Rex grew quickly and needed a lot of meat to sustain its growth, so it would swallow hundreds of pounds of meat in one go.

A study in the journal Historical Biology suggests the maximum force of a T-Rex bite was best suited to kill and eat adult Triceratops-sized prey. Just for reference, an adult Triceratops was much larger than an elephant. On average they were 30 feet in length and weighed 20,000 lbs!

What Did Plant Eating Dinosaurs Eat?

The largest dinosaurs, the sauropods like Brachiosaurus, ate greenery and lots of it!

Argentinosaurus, the largest herbivore to exist, ate hundreds of pounds of ancient plants like ginkgo, cycads, and ferns every day.  Argentinosaurus  was 40 meters long and would have and weighed the same as 18 elephants. It was a long-necked sauropod that reached high trees to munch on cypress, pines, yew, and redwood leaves. Shorter limbed Ankylosaurus, Triceratops, and Stegosaurus ate moss, fallen leaves, twigs or any vegetation within their reach.

Plant life was tough to eat, so herbivores had flat teeth to strip, slice, and grind foliage. They also ate stones to grind up tough vegetation and make it easy to digest. Can you imagine what their enormous droppings would have looked like!

What Dinosaurs Eat Meat And Plants?

Dinosaurs that ate meat and plants are called omnivores. Omnivorous dinosaurs ate meat, plants, insects, fish, eggs – anything they could find. They were hunters and scavengers who made the most of their environment.

Omnivore Gallimimus, who lived in the Late Cretaceous around 70 million years ago, ate an arid landscape diet that included dinosaur eggs, lizards, insects, fruit, and seeds. Much like our modern chickens, omnivores were opportunists that grabbed anything edible.

Omnivore fossils are found in many different countries and the most likely reason is that they had a more flexible diet.

Would A Dinosaur Eat A Human?

Yes. Dinosaurs would eat humans if we lived in the same time period. Carnivores like T-Rex would prey on us, which is a terrifying thought! Omnivores would have scavenged human remains and water-going dinosaurs like Spinosaurus would eat swimmers or beachgoers.

Humans would not have been top-of-the-food chain millions of years ago! Thankfully we are separated by 65 million years.

What Dinosaurs Are Still Alive?

Dinosaurs were wiped out millions of years ago, but birds evolved from a common dinosaur ancestor so that’s the closest we can get. The classic T-Rex, Triceratops, Velociraptor, and Stegosaurus don’t exist now.

Dinosaurs were not the only type of animal around in the ancient world. Crocodiles, crabs, sharks, turtles, cockroaches and small shrew-like mammals co-existed. No doubt they formed part of the dinosaurs’ diet.

What Did Dinosaurs Drink?

Carnivores would hunt at water sources because all dinosaurs needed water to drink. A safe, quiet watering hole was a top priority for all dinosaurs.

Dinosaurs didn’t eat lawn-type grass because it hadn’t evolved yet. The first grasses like rice and other flowering grasses began to appear not long before the dinosaurs were wiped out.

Grass evolved because the world was affected by low temperatures that lessened its lushness. Falling temperatures reduced the dinosaur-era tropical forests and created wide-open savannahs, plains, and prairies that we still see today.

So we can see that dinosaurs eat almost everything on planet earth! From leaves to eggs, insects, fish and other dinosaurs, their diet was hugely varied. What dinosaurs ate depended entirely on their environment, how big they were, and what type of teeth they wielded.

What did dinosaurs eat?

Dinosaurs eat plants, meat, eggs, insects, and fish. These extinct creatures consumed a huge variety of different food from abundant plant life to other dinosaurs, but what they ate depended on how big they were and the available resources.

Would dinosaurs eat a human?

Yes. Dinosaurs would eat humans if we lived in the same time period. Carnivores like T-Rex would prey on us, which is a terrifying thought! Omnivores would have scavenged human remains and water-going dinosaurs like Spinosaurus would eat swimmers or beachgoers.

Discover the Animal That Can Live 10,000 Years 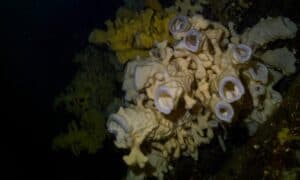