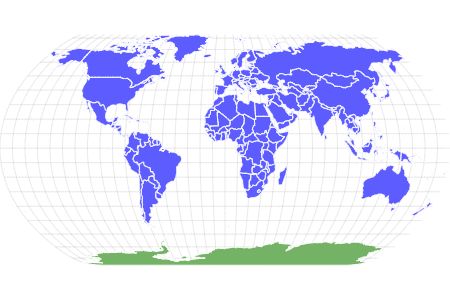 View all of our Chicken pictures in the gallery.

View all of the Chicken images!

The most widely domesticated fowl on earth, the chicken is a gregarious bird that is extensively used for its meat and eggs.

Every year, more than 50 billion chickens are processed for such uses. They vary widely in terms of appearance and other characteristics across hundreds of different breeds. Industrial farms produce the majority of chickens, but some are kept as pets or for other purposes.

The chicken belongs to the kingdom Animalia, the phylum Chordata, the class Aves, the order Galliformes, the family Phasianidae and the genus Gallus. The common chicken that is widespread around the world belongs to that genus. There is a great deal of debate in the scientific community regarding the scientific name of the domesticated chicken, however. Some consider the chicken to be a domesticated type of wild red jungle fowl, Gallus gallus. Others classify the bird as a subspecies of that same fowl, giving it the scientific name G. gallus domesticus. Still others, including the USDA, consider G. domesticus as the scientific name of the domesticated chicken. Either way, all chickens belong to the same phylum, class, order, family and genus.

Originally, the species as a whole was called the domestic fowl, or simply the fowl. Back then, the classification “chicken” referred to a young domesticated fowl. The term “hens and chickens,” a holdover from this period, is still often used today.

In the Deep South of the U.S., chickens are often referred to as yardbirds.

There are hundreds of different chicken breeds and classifications. They are distinguished from each other by many characteristics, including the following: the place of origin, skin color, plumage color, size, comb type, number of toes, egg coloring, and amount of feathering. In general, however, the chicken is a squat bird with a rounded appearance. Typically, they stand no more than 27.6 inches tall, and they weigh around 5.7 pounds on average.

Males and females have fleshy combs atop their heads and lobed wattles below their bills. These and other fleshy protuberances are collectively known as caruncles. Shiny, pointed feathers known as hackles adorn the neck, and more appear along the back and are known as saddles. These birds usually have high, arched tails. In some breeds, the tail can extend up to 12 inches or more in length. Males, known as roosters, typically exhibit bolder, brighter colors than their female counterparts.

Chickens are very gregarious creatures, and they live together in flocks. Intelligent and curious by nature, they develop social hierarchies within their flocks. These hierarchies, known as pecking orders, determine access to food, mates, nesting sites, and other resources. They typically consist of one dominant male, a handful of subdominant males, and two or more females that are watched over closely by the dominant male.

Chickens use various calls to communicate with each other. For instance, rooster crows are used as territorial signals to other roosters in the area; sometimes, they are prompted by sudden disturbances. After laying eggs, hens cluck. They also cluck to summon their chicks (the name for baby chickens) over to them. Chickens also warn each other of danger using distinct warning calls based on whether the danger is coming from overhead or by land.

Chickens are believed to originate from the wild red jungle fowl, which can be traced to Southeast Asia and possibly certain parts of India. Domestication of these birds is believed to have happened multiple times, starting approximately 7,500 years ago. They may originally have been domesticated for religious purposes or for entertainment in the form of cockfighting, which is now banned in many parts of the world.

Today, most chickens are raised in captivity. Their habitat often consists of a factory farm setting. In the wild, however, they have two primary habitats. Feeding areas usually consist of open canopies and underlying shrubs while roosting sites are typically found in lower tree branches and are used at night. In captivity, chickens require the same dual-habitat system. Frequently, this includes a chicken coop and a fenced-in outdoor area.

As omnivores, chickens are opportunistic feeders in the wild. They typically forage for food by scratching their beaks on the ground, searching for insects, seeds, fruits, and vegetables. At times, they will consume larger animals, including small snakes, lizards, and mice. In captivity, chickens are primarily fed chicken feed that consists mostly of grains and grain byproducts.

Want to lean more about what chickens eat? Check out our complete guide ‘What Do Chickens Eat?‘

Chicken: The Bird’s Predators and Threats

On a global scale, the biggest threat to chickens is industrialized farming. More than 50 billion chickens are processed for their meat and eggs every year through mass farming practices.

Chickens are susceptible to many diseases. Most famously, they often harbor salmonella in their feces and dander. Their meat must be cooked to a temperature of 165 degrees Fahrenheit to kill off the deadly bacteria.

In the wild, common predators of the chicken include bobcats, foxes, coyotes, snakes, skunks, opossums, rodents, raccoons, weasels, and birds of prey.

In Ancient Egypt, the chicken was known as “the bird that gives birth every day,” which relates to the fact that hens can lay upwards of 300 eggs per year. When courting a female – usually during the spring or summer – a rooster may perform a circle dance in which he dances in a circle while keeping a lowered wing pointed in her direction. If the female is receptive, she will crouch down; mating commences from there.

Hens usually try to lay eggs in the same location every time. Sometimes, they seek out existing nests with eggs already in them, and they may even move eggs from a neighboring nest to their own. Hens lay around 12 eggs to complete a clutch; all of the eggs are incubated after the clutch is complete. As a result, eggs laid at different times still hatch around the same time.

Once she stops laying eggs, the hen “goes brooding.” She sits, or sets, on the nest to protect the eggs, rarely leaving them alone and turning them regularly. All of the eggs in the clutch hatch within a day or two of each other. Eventually, the hen hears the chicks peeping inside the eggs, and she clucks back. From there, chicks “pip,” or peck out breathing holes in their eggs with their egg tooths. They rest for a while afterward, absorbing yolk for nourishment. After enlarging the original hole, chicks break out and remain in the nest for roughly two days. Hens care for their chicks for several weeks after that, leading them to food and water but not feeding them directly.

Roughly 23 to 26 hours pass between ovulation and egg-laying. Subsequent ovulations can occur within an hour after the last egg is laid, which is why hens are such prolific egg layers. Some breeds can produce more than 300 eggs in a single year.

As far as longevity goes, chickens in free-ranging flocks live for an average of six to eight years. The majority used in the poultry industry lay eggs for two to three years before being slaughtered for their meat. The oldest living chicken on record, a hen named Matilda from Alabama, lived to 16 years of age and is listed in the Guinness Book of World Records.

In 2018, there were estimated to be approximately 23.7 billion chickens in the world. That represents a significant increase from 2011 when the population stood at 19 billion or so. Every year, more than 50 billion chickens are processed for their eggs and meat.

Chickens are not considered endangered in any way, and they are found throughout the world. Most chickens live and die on factory farms, but some are raised using free-range farming techniques. A small percentage of the world’s chickens are kept as pets.

Are Chickens herbivores, carnivores, or omnivores?

Chickens are Omnivores, meaning they eat both plants and other animals.

What Kingdom do Chickens belong to?

Chickens belong to the Kingdom Animalia.

What class do Chickens belong to?

Chickens belong to the class Aves.

What phylum to Chickens belong to?

Chickens belong to the phylum Chordata.

What family do Chickens belong to?

Chickens belong to the family Phasianidae.

What order do Chickens belong to?

Chickens belong to the order Galliformes.

What type of covering do Chickens have?

Chickens are covered in Feathers.

What genus do Chickens belong to?

Chickens belong to the genus Gallus.

In what type of habitat do Chickens live?

What is the main prey for Chickens?

What are some predators of Chickens?

Predators of Chickens include humans, foxes, and raccoons.

What are some distinguishing features of Chickens?

How many eggs do Chickens lay?

What is an interesting fact about Chickens?

Chickens were first domesticated more than 10,000 years ago!

What is the scientific name for the Chicken?

The scientific name for the Chicken is Gallus gallus.

What is the lifespan of a Chicken?

Chickens can live for 2 to 4 years.

What is the Chicken's wingspan?

How fast is a Chicken?

A Chicken can travel at speeds of up to 6 miles per hour.

How do Chickens have babies?

What is the difference between a hen and a chicken?

The primary difference between a hen vs chicken lies in their gender. Hens are always female, while chicken refers to either gender of bird. Chickens are also the overall species name for both hens and chickens, while the title of hen is only bestowed on certain types of chickens.

What is the difference between a rooster and a chicken?

What is the difference between duck eggs and chicken eggs?

What are the key differences between a pheasant and a chicken?

The key differences between a pheasant and a chicken are appearance, diet, domestication, and population.

What are the differences between guinea fowls and chickens?

The greatest differences between guinea fowls and chickens lie in their size, domestication, and meat.