When asked to think about animals with great defense, many people will think of a hedgehog. These small, spiky mammals are covered in hundreds of sharp spines made of stiff keratin. That said, they are not to be confused with a porcupine or echidna, which are different species. Hedgehogs belong to the family Erinaceidae, which also consists of moonrats. They get their name from the Middle English words for “hedge” a “hog” or pig, due to their habit of spending time in hedges and their pig-like snout. While they are native to Europe, Asia, and Africa, you can also find them in the wild in New Zealand. You likely have seen a hedgehog before, either online or in a pet store. Perhaps you even know a fair bit about them. That said, do you know the answer to the question, “what do hedgehogs eat?”

In this article, we’ll aim to answer this question about hedgehogs’ dietary habits. First, we’ll examine some different foods that hedgehogs like to eat. Then, we’ll uncover how hedgehogs hunt and forage for food. Next, we’ll compare what hedgehogs eat in the wild versus what they eat as pets. Then, we’ll end with a conversation about baby hedgehogs. So, let’s get this discussion rolling and answer the question, “what do hedgehogs eat?”

The type of foods that hedgehogs eat varies depending on their location. For example, a hedgehog in northern Africa will not eat the same food as a hedgehog living in Asia. That said, there are some similarities in the diets of different hedgehog populations. Until recently, hedgehogs used to be considered insectivores, given the insects make up a large part of their diet. Today, it’s more accurate and common to call hedgehogs omnivores, as they eat both plant and animal matter. Hedgehogs are known as greedy eaters and will eat themselves to obesity if given the chance. In the wild, this rarely happens, as they have to forage for food. However, when given the chance, hedgehogs will glad chow down on their favorite treats. In case you were curious, we’ve compiled a list of 10 foods that hedgehogs like to eat. These foods include:

How Do Hedgehogs Hunt and Forage for Food?

Hedgehogs rely on their senses in order to forage for plants and hunt prey. Of their five senses, their sense of smell is likely the one they rely on most to find food. They constantly sniff the air when walking about, and can locate food located more than an inch below ground. Their sense of smell not only helps them to find food but also to locate other hedgehogs and potential threats. Aside from smell, hedgehogs also possess excellent hearing, especially when it comes to detecting high-frequency sounds. On the other hand, a hedgehog’s eyesight is rather poor compared to its hearing and smell. They have poor depth perception and binocular vision, but that’s okay, because they mostly look for food at night in dense underbrush. So, while they may use their vision sparingly to find food, it is by far not their most important sense.

Hedgehogs are nocturnal, which means that they are most active at night. Once the sun goes down, hedgehogs emerge from the burrows to search for food. They tend to spend most of their time foraging in dense hedges, hence their name. This serves a dual purpose, as the hedges are full of food including berries, roots, and insects, and the dense cover also protects them from potential predators. Hedgehogs will root around inside hedges in search of food, and use their paws to dig up plants. If they come across insects or small prey animals, they will simply snatch up the animal with their jaws. Although they’re rather small, hedgehogs can run up to 4 miles per hour for short bursts. This allows them to chase down any fleeing animals and hopefully catch them before they can get away.

What Do Hedgehogs Eat in the Wild?

In the wild, hedgehogs eat a wide variety of plants and animals. Overall though, insects, berries, roots, and small animals make up the bulk of their diet. In particular, hedgehogs love to snack on insects, arthropods, and other small invertebrates. Some of their favorite prey include crickets, grasshoppers, beetles, centipedes, slugs, millipedes, and worms. They will also target and eat small animals such as frogs, snakes, and mice. When available, they may prey on the eggs of birds, particularly ground nesting birds. Plants also make up an important part of a hedgehog’s diet. In particular, they enjoy fruits such as berries and melons. When other foods are in short supply, they will also eat grass stems and roots. Additionally, hedgehogs may also eat carrion if readily available. Finally, hedgehogs that live close to human habitats may raid gardens and snack on the vegetables growing there.

What Do Pet Hedgehogs Eat?

Despite their spiky appearance, many people decide to raise hedgehogs and keep them as pets. Of the nearly 17 species of hedgehog, the African pygmy hedgehog is the one most commonly kept as a pet due to its small size. If you decide to keep a pet hedgehog, you’ll need to know what to feed your hedgehog to keep it healthy. Many pet hedgehog owners opt to feed their pet high-quality hedgehog food. Additionally, you can supplement your hedgehog’s diet with fresh fruits and vegetables. Safe fruits include bananas, apples, pears, berries, and melons. As for vegetables, go for things like cooked squash, fresh tomatoes, and green beans. You can also feed your hedgehogs insects, mealworms, or even small amounts of cooked meat. Just make sure to keep an eye on its enclosure and to replace food often if it goes uneaten.

What Do Baby Hedgehogs Eat?

Also known as hoglets, baby hedgehogs, are typically born during the winter while their mother is hibernating. For the first 3 or 4 weeks of life, the hoglets are completely reliant on their mother. During this time, they subsist solely on their mother’s milk. Once their spines start to grow, they are old enough to leave the nest. At this point, they begin to forage and eat the same foods as adult hedgehogs. Still, they will remain with their mother for several more weeks until they’re ready to venture out on their own. If you’re raising a baby hedgehog, you can feed it tinned or dry pet food. You may need to soak the food in water first in case the food is too dry. Before introducing new food to a hedgehog, make sure to consult with a veterinarian first.

Hedgehogs have their fair share of predators in the wild. Those of the mammalian variety include badgers and foxes. The former seem a greater threat compared to the latter owing to their powerful claws with which they can pull apart their spiny prey wrapped into a defensive ball. According to experts, the scent of badgers is sufficient to put hedgehogs on high alert. And they will amble faster past spots which smell suspiciously of their arch-nemesis.

These little adorable mammals also have to worry about predators of the avian variety too. Owls and golden eagles are rather partial to fresh hedgehog and are unlikely to pass up the opportunity for such a delicacy. 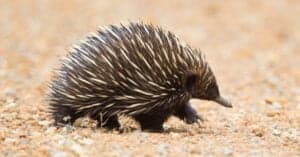 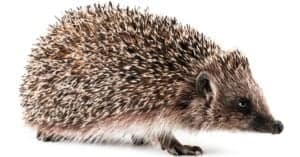 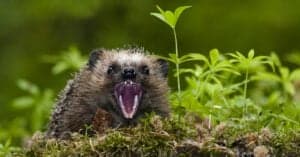 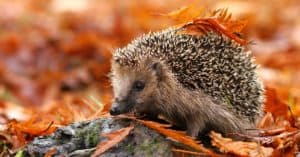