Click through all of our Barramundi Fish images in the gallery. 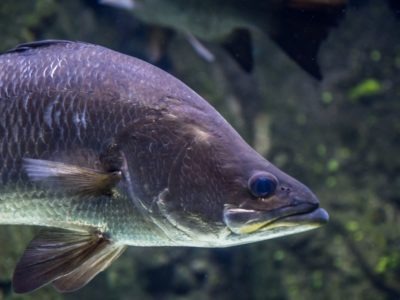 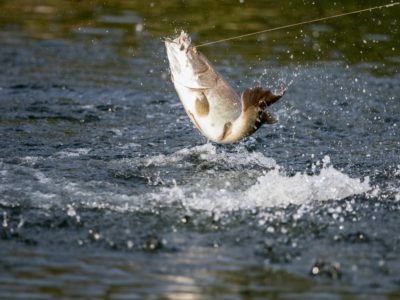 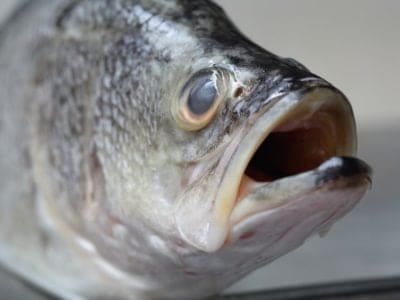 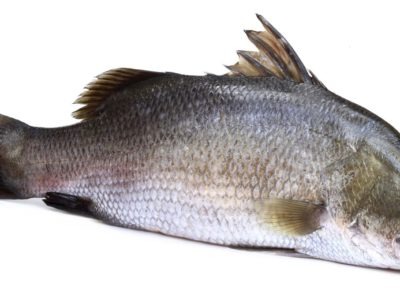 View all of the Barramundi Fish images!

The Barramundi, also known as the Asian sea bass, is a versatile fish that is prized as both a food source and a challenging sport fish.

Aside from substantial wild populations in many geographical regions, the species is also cultivated through aquaculture in multiple countries. The barramundi’s compact and elongated body are among its most distinctive visible features. It is also known for its ability to tolerate a wide range of water types, including both fresh and saltwater bodies.

Barramundi fish derive its name from the language of Australian aboriginal people native to the Queensland area. The name means “large-scaled river fish,” which is an apt description of the animal. It also has many other local or common names, including: Australian or Asian sea bass, barramundi perch and giant sea perch.

The fish is also known in the scientific community as Lates calcarifer, with several synonymous historical classifications like Holocentrus calcarifer and Lates darwiniensis. The species is a member of the Latidae taxonomic family, which is in the Actinopterygii class along with other ray-finned fishes.

These fish have a relatively long body in proportion to their other dimensions with a long, concave head. They also have large mouths with a distinctive protruding lower jaw that can extend well past their eyes. They have a prominent dorsal fin with a combination of spines and rays in both dorsal and ventral fins. While they often appear olive-green or silver, their coloration can vary significantly to provide camouflage relevant to their regular environment.

As the meaning behind their common name suggests, barramundi fish have relatively large scales with strong adhesion that can make descaling a labor-intensive process. The scales are also considered ctenoid, which means they have prickly or serrated edges.

This species has a wide distribution throughout the Indo-Pacific region, with native populations found from Africa to Japan. It has a diverse and substantial population across northern Australia, particularly in the waters stretching between Australia and Papua New Guinea. Despite a notable absence along much of the Chinese coastline, it’s also found around the Sea of Japan as well as the waters of southeast Asia and India.

Barramundi have a high range of salinity tolerance so they thrive in both salt and freshwater environments. However, despite their flexible salinity range, they are sensitive to temperatures outside of their ideal range of 26−30°C (79 to 86°F). They are considered catadromous, which means they typically migrate up rivers to breed. Wild fish rely on the many estuaries around the Indo-Pacific region as spawning grounds.

Exact population numbers are unknown due, in part, to the wide geographical distribution, habitat diversity and migratory nature of the fish. However, ecologists and conservationists have little reason to believe that numbers have been increasing or declining at a significant rate. The species is currently classified as least concern, although this may change if global demand for the fish continues to increase.

Due to their wide distribution around the Indo-Pacific region, there are numerous potential predators for juvenile and adult fish. Some local snake species, Australian pelicans and saltwater crocodiles are among the confirmed natural predators. Humans are also a major predator of barramundi in both a recreational and commercial context.

Prey: Food Targets for the Barramundi

These fish are considered opportunistic predators and have a strong feeding reflex, so they will consume any aquatic prey small enough to swallow, including their own young. Young barramundi typically target very small organisms, like zooplankton, in their brackish spawning habitat. Prey targets increase in diversity, including crustaceans and molluscs, as the fish matures into greater size and begins to migrate.

Barramundi fish are considered sequential hermaphrodites, which means they switching from one gender to another throughout their life cycle. Typically, fish spawn as males and continue in this role until their first spawning season, then switch to female as they mature further. Little is known about the life-span potential of the species, but they are known to grow quickly and reach commercial size within two years.

In most regions, breeding begins with the onset of monsoon when winds and weather shifts to wetter patterns. Males migrate down freshwater estuaries to meet with females in brackish water and tidal flats outside the mouth of the rivers. Moon phase has a notable impact on spawning rates, with full and new moon showing significantly increased activity. Females release vast numbers of eggs, with some individuals releasing several million, which are then fertilized and left unsupervised for the remainder of their lives.

Barramundi Fish in Fishing and Cooking

Barramundi are a potential sport-fishing target due to their availability and strong fighting ability. They are stocked in some regions specifically for recreational fisherman with many anglers seeking them as a “catch and release” target. They are a prime target for commercial fisheries throughout Australia, Southeast Asia and India with over 30,000 tons of fish brought in annually. Many countries outside their native range, including the United States, also cultivate the fish through modern aquaculture methods.

The fish’s pinkish flesh turns to flaky white when cooked, which can be compared to meat of snapper, striped bass or grouper. The meat has a decent amount of oil with a sweet, buttery taste, which makes it a popular staple in local cuisines throughout the Indo-Pacific region. When it comes to nutrition, body fat composition varies from fish to fish, but they usually have a high protein to fat ratio.

The relatively mild flavor gives chefs a wide range of options when it comes to spices and modes of preparation. It can be baked, broiled, fried, grilled, or poached with good results. Dill and lemon sauce is a popular choice for grilled meat, which is generally a healthy option for those emphasizing nutrition, and many people also like the general fish batter and fry technique. Traditional preparation according to aboriginal populations involves wrapping the fish in the leaves of wild ginger plants. The wrapped meat is then placed directly into the hot coals or ashes of a fire and baked.

Since barramundi has such a large area of geographic distribution and tends to migrate frequently throughout their lives, researchers have a difficult time tracking and estimating their total population. They are currently classified as least concern despite significant commercial fishing operations.

View all 120 animals that start with B

What is barramundi fish?

Barramundi, also known as Asian sea bass, is a widespread species of carnivorous fish that is sought after by both recreational and commercial fishermen. They are a common source of protein-rich nutrition, which makes them a prime food source in Asia, India, and Australia. Acidification of ocean environments is thought to be a bigger risk to their overall population that continued commercial and recreational fishing by humans.

Where are barramundi fish found?

Barramundi is found throughout the Indo-Pacific region with a native range that extends as far west as Africa, east to Australia, and north to Japan. Large populations are found around the coasts of northern Australia and around several countries in Southeast Asia. Locally, younger members of the species prefer freshwater rivers and estuaries, while mature adults spend more time in coastal saltwater environments.

What fish is barramundi similar to?

From an angler’s perspective, barramundi is similar to sea bass in their general shape and fighting ability on the line. In the context of the kitchen, the appearance and texture of the fish’s meat are similar to that of snapper, grouper, and striped bass.

Where do barramundi fish live?

These fish tolerate a wide range of salinity levels in the water, so they can be found in fresh, salt, and brackish water. Babies are spawned in brackish environments, like tidal flats, found near the mouths of rivers. Young adults typically live in rivers and other estuaries, while older adults frequent coastal areas outside of local river systems.

How big are barramundi fish?

These fish are relatively large and adults often reach lengths of around 5 feet (1.5m), which is almost the average height of adult humans. They can also reach relatively substantial weights of around 120lbs (55kg).

The species is characterized by a compact and elongated body that is covered by large, strong scales. Scale color can range from green to silver depending on their native environment. These fish also have a distinctive concave head, pointed nose, significant under-bite, and long mouth.

Barramundi Fish are Carnivores, meaning they eat other animals.

What Kingdom do Barramundi Fish belong to?

How do Barramundi Fish have babies?