Has a symbiotic relationship with a host sea anemone

Click through all of our Clownfish images in the gallery. 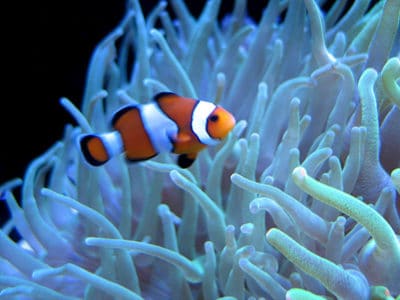 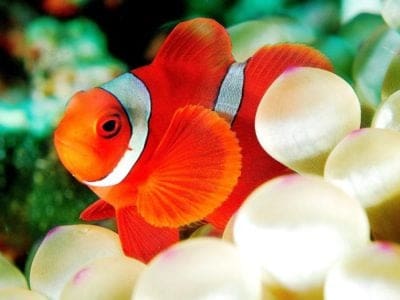 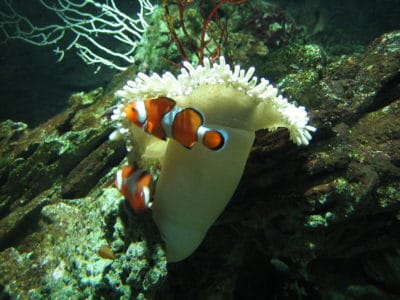 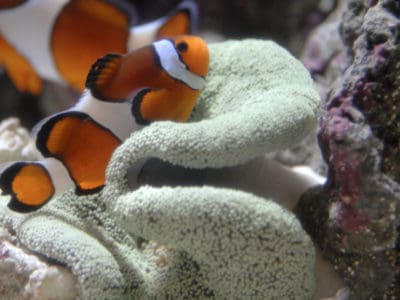 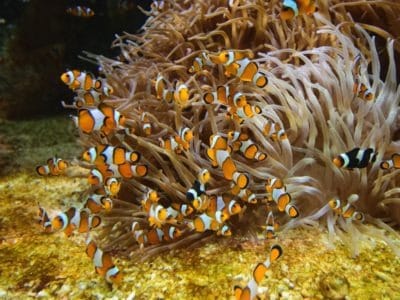 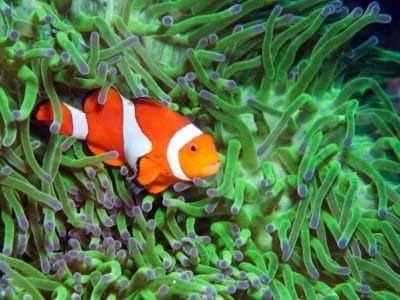 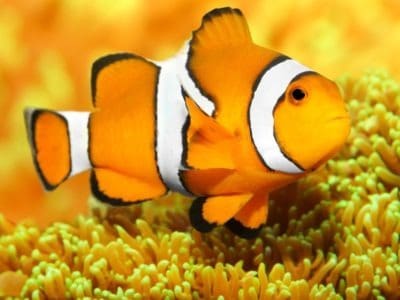 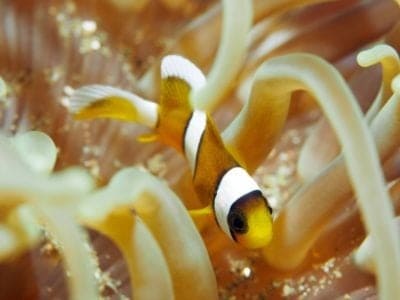 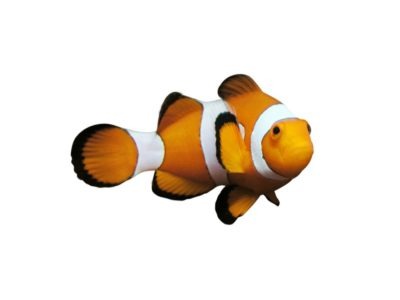 View all of the Clownfish images!

The Clownfish gained worldwide fame thanks to the popularity of the 2003 film Finding Nemo.

Instantly recognizable thanks to its bright orange coloring and distinctive white banding, the clownfish – which is also known as the false clownfish, anemonefish, and false percula – gained worldwide fame thanks to the popularity of the 2003 film Finding Nemo. Found in large, stable populations in shallow waters of the Red Sea, the Indian Ocean, and the western Pacific, clownfish are part of a genus that includes more than 30 species.

The scientific name for the clownfish is Amphiprion ocellaris. The term Amphiprioninae is derived from Greek, with “amphi” meaning “both sides” and “prion” meaning “saw.”

Other names for the clownfish include anemonefish, false clownfish, and false percula.

Across more than 30 species, these fish boast an array of different colorings and appearances. The most well-known species, by far, is the false clownfish of Finding Nemo fame, A. ocellaris. This fish has bright orange coloring and three broad, white bands that are outlined with thin bands of black. It is nearly indistinguishable from A. percula, the orange clownfish; one distinction is that the black bands outlining the white bands are thicker than on the false clownfish.

Other species of clownfish include:

The maroon clownfish, Premnas biaculeatus, is the only species found outside of the genus Amphiprion.

These fish grow to an average length of 4.3” and an average weight of 200 grams. The most recognizable species, the false clownfish, has bright orange coloring that is set off by broad, white bands outlined in black. This fish has a rounded tail, and its dorsal fin is lined with 11 spines. They are nearly identical to A. percula, the orange clownfish or clown anemonefish, and they start out life with clear or transparent skin that gradually attains its coloring and markings.

These fish are found in coral reefs primarily off the coast of Australia and Southeast Asia. They inhabit the waters of the Red Sea, the western Pacific Ocean, and the Indian Ocean, but they are not found in the Atlantic Ocean, the Caribbean Sea, or the Mediterranean Sea.

Population estimates for them are not available, but they are abundant and widespread in endemic areas. These fish are not endangered, so they are not listed as such on the IUCN list. However, the coral reefs where they live are endangered, with 15% to 30% of the reefs having disappeared within this generation. After the movie Finding Nemo debuted in 2003, demand for these fish for home aquariums skyrocketed. It is believed that an increase in hunting for the elusive fish contributed to coral reef damage.

Anemonefish, as they are also known, get this name because they form symbiotic relationships with sea anemones. Sea anemones, creatures that anchor to the ocean floor and use tentacles to draw in food, come in various species. However, the fish primarily form symbiotic relationships with three species, or types, of sea anemone: Heteractis magnifica, Stichodactyla gigantia and Stichodactyla mertensii.

Sea anemones release toxins from their tentacles. Clownfish evade this issue by performing an intricate dance with the anemone that they want to claim. As it gently touches the anemone’s tentacles, a clownfish becomes acclimated, developing a layer of mucus that scientists believe gives it immunity to the anemone’s lethal stings. Once entrenched, the fish benefit from this relationship with increased protection and safer access to food; sea anemones benefit because clownfish drive away would-be attackers and preen, or remove parasites from, their bodies.

Thanks to the protection granted to them by their host anemones, anemonefish face very few predators. The exception is when they have to dart out for food; at those times, they are hunted primarily by larger, more aggressive fish.

What Do Clownfish Eat?

These fish are omnivores, so they eat both plants and other animals. They primarily subsist by feeding off of zooplankton and phytoplankton. Known as “plankton pickers,” these fish find and target specific plankton floating in their water column before eating them. This is as opposed to filter-feeding, which involves filtering huge quantities of plankton through the mouth to obtain nutrition.

On average, anemonefish live for six to 10 years.

One of the most intriguing facts about these fish is that all of them are born hermaphrodites, meaning they have both male and female sex organs. Male organs develop faster, so most clownfish become and remain males. However, they may switch to become females for various reasons.

These social fish are monogamous. Before spawning, the male anemonefish prepares the nest, usually found within an anemone or on a rock nearby. He then courts a female by extending his fins, chasing and biting at her. The female then passes over the nesting site multiple times, laying anywhere from 100 to 1,000 eggs. The male then passes over, releasing sperm to fertilize the eggs.

The female clownfish then leaves, and the male tends to the nest. The larvae hatch six to eight days later and float away. After spending about 10 days adrift, they settle onto the bottom of the coral reef before seeking a host anemone. They transform from being clear and translucent to having their distinctive orange coloring and markings during this time.

Clownfish in Fishing and Cooking

Clownfish are not popularly cooked or consumed for food. Among other interesting facts, demand for them as aquarium pets surged in the wake of Finding Nemo. In turn, the harvesting of clownfish skyrocketed, and it’s believed this activity may have contributed to damage to various coral reef systems.

Because they spend their lives mostly sheltered within sea anemone hosts, clownfish do not face many predators. When they leave for brief intervals, they are typically hunted by larger fish.

What is a clownfish classification?

A clownfish is a member of a genus that has more than 30 species. However, when most people think of the clownfish, they are thinking of A. ocellaris, the false clownfish. The fish was popularized by the movie Finding Nemo. All clownfish belong to the class Actinopterygii and to the phylum Chordata. Nearly all types of clownfish are found in the genus Amphiprion, but one is found in the genus Premnas. That genus is still found in the same phylum, however.

Where do clownfish live?

Clownfish are found in the shallow waters and coral reefs of the western Pacific Ocean, the Indian Ocean, and the Red Sea. They form symbiotic relationships primarily with three types of sea anemones, and they spend the vast majority of their lives within their host anemones.

Are clownfish good to eat?

No, clownfish are not considered good to eat, and they are not hunted for food.

The distinctive and bold markings on a clownfish are reminiscent of the face paint worn by clowns, which is what inspired their name.

Are Clownfish herbivores, carnivores, or omnivores?

Clownfish are Omnivores, meaning they eat both plants and other animals.

What Kingdom do Clownfish belong to?

Clownfish belong to the Kingdom Animalia.

What class do Clownfish belong to?

Clownfish belong to the class Actinopterygii.

What phylum to Clownfish belong to?

Clownfish belong to the phylum Chordata.

What family do Clownfish belong to?

Clownfish belong to the family Pomacentridae.

What order do Clownfish belong to?

Clownfish belong to the order Perciformes.

What type of covering do Clownfish have?

Clownfish are covered in Scales.

What genus do Clownfish belong to?

Clownfish belong to the genus Amphiprion.

What is the main prey for Clownfish?

What are some distinguishing features of Clownfish?

Clownfish have three wide, white bands on their bodies.

How many eggs do Clownfish lay?

What is an interesting fact about Clownfish?

The Clownfish is also known as the anemonefish!

What is the lifespan of a Clownfish?

Clownfish can live for 6 to 10 years.

How many species of Clownfish are there?

There are 27 species of Clownfish.

What is the biggest threat to the Clownfish?

The biggest threat to the Clownfish is the destruction of coral reef habitats.

What is the optimal pH for a Clownfish?

What is another name for the Clownfish?

The Clownfish is also called the anemonefish, false clownfish, or false percula.

How do Clownfish have babies?

How to say Clownfish in ...