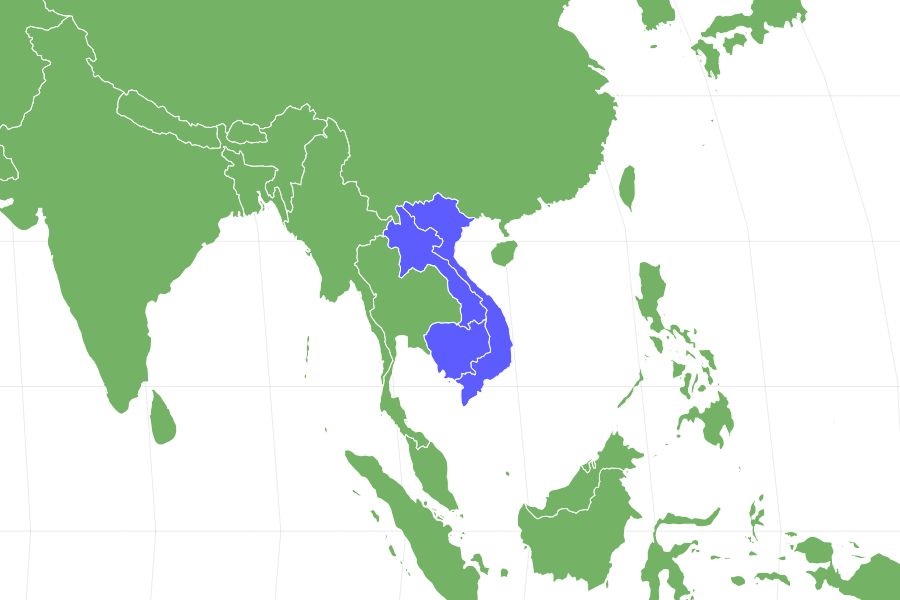 View all of our Douc pictures in the gallery.

View all of the Douc images!

The Douc can be called “A Casualty of War.”

The douc is an Old World Monkey from Indochina with the face of an ancient, bearded sage. Despite this, it is playful, full of life, and gregarious. The red-shanked species is also the most colorful monkey in the world with a coat that comes in shades of white, red, gray, and black. Despite this, all three species of this primate are in danger of going extinct due to hunting and deforestation. Indeed, the monkey was one of the many casualties of the Vietnam War, as Agent Orange was used to defoliate the trees where it lived. To add insult to injury, soldiers used the animal as target practice. The populations still haven’t recovered from this.

Here are five facts to know about this uniquely beautiful monkey:

The genus these langurs belong to is Pygathrix. Pygathrix means “hairy buttocks” in Ancient Greek. Pugḗ means “buttocks” and thrix means “hair.” It is, after all, one way to describe this Old World monkey. The nemaeus in P. nemaeus evokes the Nemean lion of Hercules as the monkey’s beard and whiskers resemble the mane of a lion. The nigripes in P. nigripes means “black-footed” in Latin, and the cinerea in P. cinerea is Latin for “ash-colored.” There do not appear to be subspecies, though grey-shanked and red-shanked doucs live close enough to interbreed. The name douc is Vietnamese for “monkey.”

The douc is a type of monkey called a langur. Langurs belong to the Colobinae subfamily in the Cercopithecidae family. They are Old world monkeys, which means they are native to Asia and Africa.

The animal’s appearance is singular, and it is one of the most colorful of primates. This is especially true of the red-shanked species. What all Pygathrix langurs have in common is a face with almond eyes and a tiny nose framed by a beard that makes the animal look like a sometimes solemn old man. The body is long and slender, between 21 and 24 inches in length, and the tail is about as long as the body. Males are larger than females.

The red-shanked douc is so colorful that is known as the five-color douc. It can be told from other Pygathrix langurs because it looks like it’s wearing reddish-brown leggings. It has white forearms and a white tail that’s used for keeping balance and ends in a tassel. The langur has a yellow-orange face and ears framed by a white beard and whiskers that are more voluminous than the whiskers of the other doucs. The dark eyes have blue eyelids. There’s a black band across the forehead. The legs above the red “leggings” are shades of gray, and the feet below them are black. The belly and the back are gray, and there’s a triangular white patch on the rump. Males can be told from females because males have spots just above the triangle. This is true of all three species. The infant has a black face and tan fur and grows into adult colors over time.

The black-shanked can be told from other species because it has a slate-colored face with yellow rings around its eyes. This contrasts greatly with its white whiskers. It has black fur from its forehead down to its shoulders where it turns black as it continues down the monkey’s back. Its shanks are black, which gives it its name. The belly is pale gray, and the tail is white. Black-shanked douc langurs are the smallest of the doucs.

The grey-shanked has, as its name says, gray shanks, and indeed most of its body is gray. Its feet and its hands are black, and it has a white throat with an orange, black-lined band that meets up with black patches on the animal’s shoulders. The tail of the grey-shanked douc is about 4 inches longer than the tails of the other species.

Despite its sometimes somber look, the douc is an active, agile, and playful primate. It lives in the trees in groups that can be as small as four but as large as 50, though a group of 50 is very unusual. However, there are instances of ales who travel alone. It is diurnal, which means it’s active during the day. There are usually two females for every male.

Males dominate, and there’s a dominance hierarchy, but these primates are seen to be unusually genial. They will even share their food, which is unusual for monkeys. They have a great repertoire of facial expressions, including a play face that invites another member of the group to play. Grimacing, on the other hand, means submission. The douc doesn’t have a large vocal range, though they growl to show aggression and have distress and warning calls. The monkeys also spend much time grooming each other. They usually groom in the afternoon, before they take a nap or go to sleep for the night. This is especially true of females.

Doucs are noisy when they travel from tree to tree. They are led by a dominant male, with females and babies in the middle and subordinate males at the back. However, they’re usually resting, grooming, digesting, playing, and play-fighting. They rarely leave the trees, though they’ve been known to go to the ground to eat soil for its mineral content.

These monkeys live in the forests of Vietnam, Laos, and Cambodia. The red-shanked can be found in the lowlands and as high as 6000 feet in the mountains. Black-shanked and grey-shanked live in evergreen or mixed evergreen and deciduous forests. They can also live in the mountains and prefer trees that are 82 to 115 feet tall.

These Old World monkeys are largely folivores, which means they eat leaves, especially leaves that are young and tender. They’ll also eat seeds, fruit, buds, and flowers. Interestingly, they prefer fruit that’s not quite ripe, as ripe fruit upsets their stomachs. Doucs are very particular about what they eat, and if a leaf, flower, or fruit isn’t up to their standards, they’ll toss it. They get all the hydration they need from their food or from sipping the morning dew. The monkeys have a multi-chambered stomach, much like a cow, that helps them break down their food through fermentation. A well-fed douc often has a potbelly.

Among the leaves and fruits eaten are:

Doucs do not seem to have natural predators. Their main predators are humans, who destroy their habitat, hunt them for bush meat and medicines, and kidnap them for the pet trade. Because of this, there are no more than 26,000 of these monkeys left in the wild, and all three species are critically endangered. Though 26,000 sounds like a large number, their numbers are declining. Even though the Vietnam War ended decades ago, the monkeys still haven’t recovered from the devastation of Agent Orange.

Black-shanked doucs don’t appear to have a breeding season. Grey-shanked and red-shanked doucs breed from August to December. Females initiate mating through facial expressions, including jutting out the jaw, shaking the head, and raising and lowering the eyebrows. If the male is interested, he might suggest moving to another area to mate.

Pregnancy lasts between 165 and 205 days, and the mother enters a period of quiet and usually stays near another female. She is intensely interested in all the babies in the group until about two weeks before she gives birth herself. A single infant is born after about an hour and a half of labor. Twins are rare among doucs. Females give birth every couple of years or so.

The mother is the primary caretaker of the baby, though she’ll allow other monkeys to babysit. Infants are weaned when they’re about a year old and become sexually mature when they’re about four or five. Females mature a bit earlier than males. A well-cared-for captive douc can live into its 20s, and though they are challenging to raise in captivity, some zoos have done so. The Philadelphia zoo kept a female Pygathrix nemaeus named Toi, who lived to be 21. She started what the zookeepers believed was an age-related decline and was euthanized in 2018.

These colorful and energetic monkeys are all critically endangered. There are only about 26,000 left in the wild in Indochina.

Are doucs carnivores, herbivores, or omnivores?

These monkeys are herbivores. They are even more specialized since they’re folivores, which means they mostly eat leaves. However, they’ll also eat flowers, buds, seeds, and unripe fruits. Black-shanked doucs are especially fond of seeds and help restore the forest when the undigested seeds in their droppings germinate.

How many douc monkeys are left in the world?

There are probably less than 26,000 Pygathrix monkeys left in the world. The largest population scientists discovered was a population of 23,000 black-shanked doucs in the Keo Seima Wildlife Sanctuary in Cambodia. There were also about 500 to 600 of these monkeys found in Vietnam. There are about 1000 grey-shanked and 1300 red-shanked doucs living in southeast Asia.

How do I pronounce douc?

They live in the forests of Laos, Cambodia, and Vietnam.

Is the red-shanked douc endangered?

This primate, one of the most colorful on earth, is critically endangered due to habitat destruction and hunting for food, sport, and folk medicine. They’re also captured for the illegal pet trade and for medical research. They have yet to recover from the decimation caused by the Vietnam War.