The world's largest species of penguin!

Click through all of our Emperor Penguin images in the gallery. 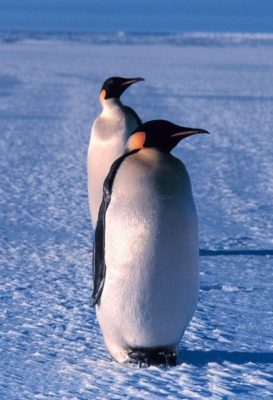 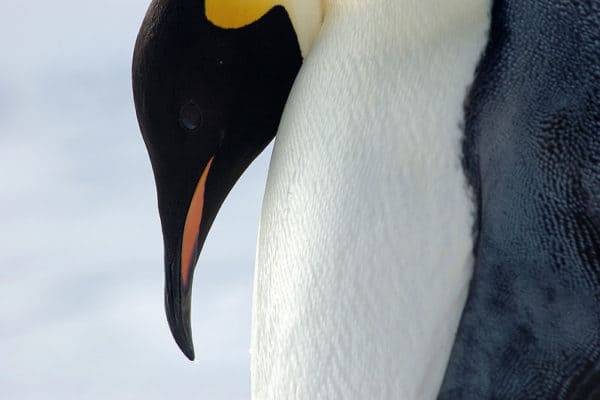 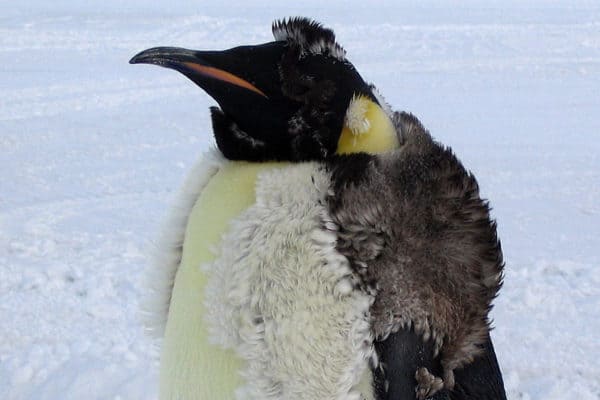 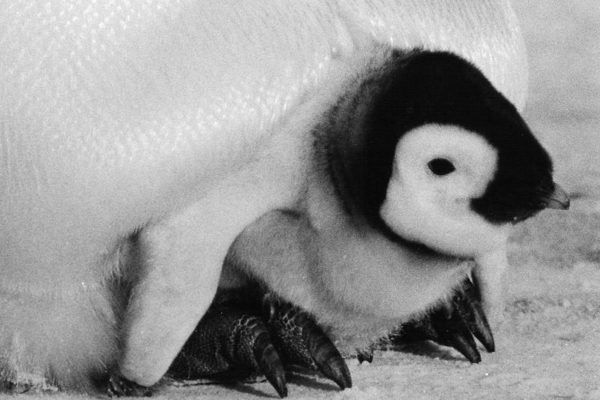 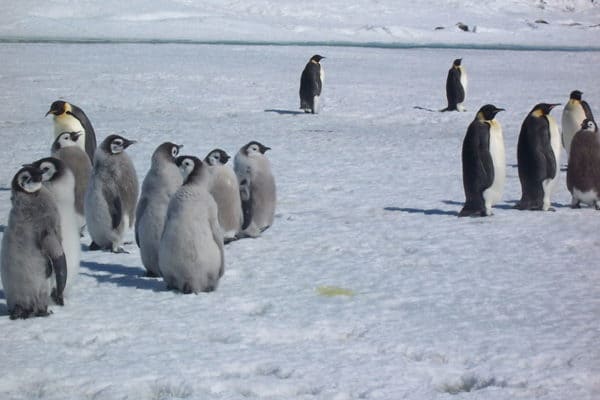 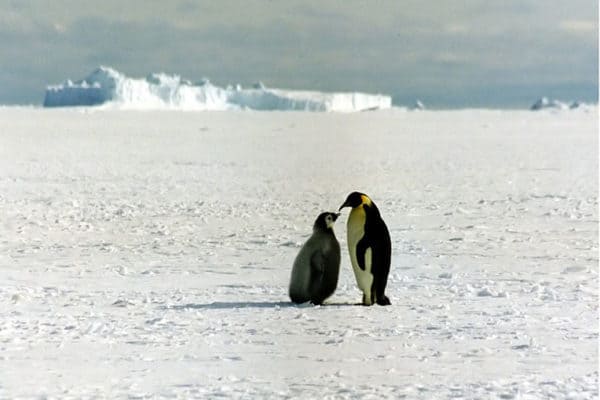 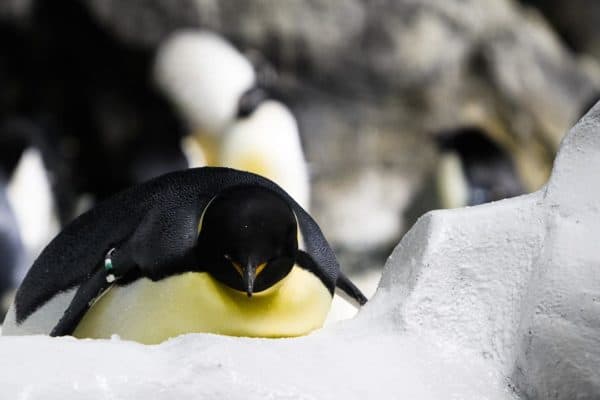 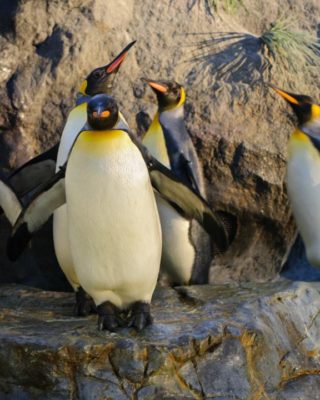 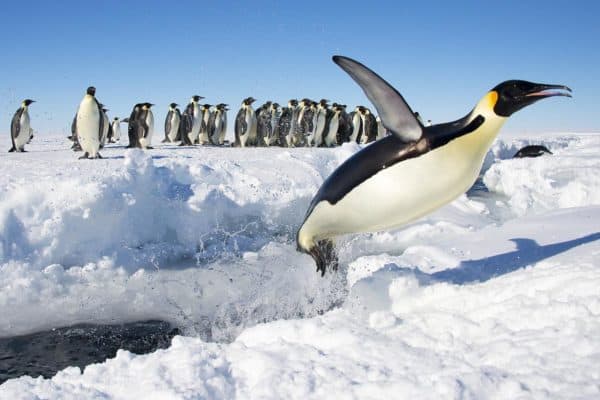 View all of the Emperor Penguin images!

The Emperor Penguin is found on and around the Antarctic continent and is not just the largest species of penguin in the world but also one of the most unique. Instead of breeding in the warmer summer months like other penguin species, Emperor Penguins lay and incubate their eggs during the coldest time of year in the coldest place on Earth. Emperor Penguins are flightless birds that have small, stiff wings that help them to fly through the water, rather than through the air. Despite having been first recorded by Captain Cook on his second voyage in the late 1700s, the first Emperor Penguin colony wasn’t discovered until 1902 with their extreme southerly-dwelling nature leading to new colonies still being recorded as late as 1986. Due to the fact that Emperor Penguins breed on the ice, they are thought to be one of the only species of bird that could spend their whole life without actually walking on land.

The Emperor Penguin is a large bird that stands up to more than a meter in height. Their feathers vary in colour from black on the back to white on the front with a yellow patch towards the neck. The black and white colouration is thought to be particularly important for camouflaging the Emperor Penguin from predators whilst in the ocean. They also have yellow ear-spots and a orange-yellow strip that runs the length of their black beak, which is relatively small in size to retain heat. Their black, clawed feet are also webbed to help them when swimming but provide little assistance when walking about on land (instead Emperor Penguins slide along on their belly). In order to keep themselves warm in such hostile conditions, they have a triple layer of dense, oily and waterproof feathers and a thick layer of blubber under their skin. They are also well adapted for swimming with their streamlined bodies gliding through the water, propelled by their small, rigid wings.

Emperor Penguins are found in the deep south, inhabiting the compacted ice on the Antarctic continent and along the coast. Coming onto land to breed, they can travel distances of up to 200km across the ice to reach their breeding colony before returning to the open ocean to feed. Unlike a number of other penguin species that may visit the Antarctic continent from time to time, the Emperor Penguin does not migrate north and instead spends the whole year deep in the Southern Ocean. In fact, only two of the forty known Emperor Penguin colonies breed on ice that is not attached to the Antarctic mainland. Emperor Penguins however, are being increasingly affected by habitat loss in the form of global warming that not just reduces the amount of pack ice surrounding the continent but also causes it to melt earlier in the year.

Emperor Penguins are incredibly sociable birds that live together in colonies that can contain thousands of individuals. Once having found a mate, Emperor Penguins remain faithful to one another for life and use vocal calls to find each other again when they return to the breeding site. They are excellent swimmers that are also known to leap out of the water when they are travelling at speed in the same way as dolphins. Known as “porpoising” it allows the Emperor Penguin to breathe but without having to slow down. They are also known to dive to depths of more than 500 meters making them the deepest diving birds in the world, where they are able to hold their breath for up to 20 minutes at a time. Usually travelling at speeds of between 5 and 10 kph but capable of swimming at 24 kph, Emperor Penguins can travel as far as 1,000km on a foraging trip.

Emperor Penguins breed every year in the winter months which are the coldest, darkest and most hostile months of the Antarctic year. They begin arriving in their breeding colonies that can be many miles from the ocean between March and April and once having found their mate, the females lay a single egg from May to June. The egg is quickly transferred to the male who rests it on his feet to stop it from touching the frozen ground, and covers it with a warm brood pouch that keeps the egg warm. Female Emperor Penguins then leave for the open ocean where they forage for food for two whole months, leaving the males to look after the eggs during the winter months. Temperatures can reach -60 degrees centigrade and with winds of up to 100 mph the male Emperor Penguins huddle together for warmth, alternating between the outskirts and the middle to ensure all members of the colony get to keep warm. The eggs hatch after 70 days in the spring which coincides with the return of the females who feed the young and keep them warm using their brood pouch on their tummies, while the males head off to find food. Once having eaten, the males return to help care for the chick which grows rapidly and has developed its adult feathers by December when the ice is melting and the ocean is then closer to the breeding grounds.

The Emperor Penguin is a carnivorous animal that only hunts and eats animals in the surrounding water in order to survive. Fish and krill make up the bulk of their diet along with squid and crustaceans. Like other penguin species, Emperor Penguins have a rough and spiky tongue which helps them when trying to eat slippery fish. Emperor Penguin chicks are not big enough or strong enough to hunt until the ice melts in the summer and so rely on their parents to collect food for them. Males and females take it in turns to leave the chick and head out to the sea to hunt for food before returning and feeding the fast-growing chick by regurgitating a fishy paste from their stomach in the chick’s mouth. Whilst incubating their egg throughout the winter, male Emperor Penguins eat nothing at all and can lose up to half of their body weight by the time the chick has hatched two months later.

When arriving back at their breeding grounds after having been feeding in the ocean for the past few months, male and female partners find one another using different vocal calls. It is thought that the frequency differs between them to make it easier for them to locate one another. The same also applies with parents and chicks when reuniting after a fishing trip. Despite the fact that Emperor Penguin chicks grow remarkably quickly, they are not able to accompany their parents into the water until between November and December and instead gather together with other chicks in small groups to keep warm. They are not just faced with a long walk out to the open ocean until the ice melts further, but they must also wait until they have developed their adult feathers which are dense and oily to keep the young Emperor Penguin both warm and waterproof.

Ever since explorers first started really venturing into the very south of the Southern Ocean and onto the Antarctic continent, they have been fascinated by penguins. In the early 20th century, scientists widely believed that Emperor Penguins were some kind of evolutionary “missing link” and although this theory has dissolved somewhat since then, they are still thought to have evolved from some of the first and most primitive bird species on the planet. Emperor Penguins have been increasingly studied as improved technology has enabled more and more people to visit them in their natural habitat. They have also been hunted and eaten by people in the past.

Today, the Emperor Penguin is listed by the IUCN as a species that is of Least Concern from becoming extinct in the wild in the near future. In fact, their southerly-dwelling nature may mean that they are the least vulnerable of the eighteen different species of penguin. There are thought to be around 200,000 breeding pairs of Emperor Penguin in the Southern Ocean and although populations remain healthy and relatively stable, they are being increasingly affected by the rapidly melting ice and the higher levels of human activity around Antarctica.

View all 24 animals that start with E

Emperor Penguins are Carnivores, meaning they eat other animals.

What Kingdom do Emperor Penguins belong to?

What phylum do Emperor Penguins belong to?

What class do Emperor Penguins belong to?

What family do Emperor Penguins belong to?

What order do Emperor Penguins belong to?

What genus do Emperor Penguins belong to?

What type of covering do Emperor Penguins have?

Emperor Penguins are covered in Feathers.

Where do Emperor Penguins live?

In what type of habitat do Emperor Penguins live?

What are some predators of Emperor Penguins?

What is the average clutch size of an Emperor Penguin?

What is an interesting fact about Emperor Penguins?

The Emperor Penguin is the world’s largest species of penguin!

What is the scientific name for the Emperor Penguin?

The scientific name for the Emperor Penguin is Aptenodytes forsteri.

What is the lifespan of an Emperor Penguin?

Emperor Penguins can live for 15 to 50 years.

What is a baby Emperor Penguin called?

A baby Emperor Penguin is called a chick.

How many species of Emperor Penguin are there?

There is 1 species of Emperor Penguin.

What is the lifespan of an Emperor Penguin?

Emperor Penguins can live for 15 to 50 years.

What is a baby Emperor Penguin called?

A baby Emperor Penguin is called a chick.

How many species of Emperor Penguin are there?

There is 1 species of Emperor Penguin.

What is the biggest threat to the Emperor Penguin?

The biggest threat to the Emperor Penguin is global warming.

What is the Emperor Penguin's wingspan?

How many Emperor Penguins are left in the world?

There are 200,000 breeding pairs of Emperor Penguins left in the world.

How to say Emperor Penguin in ...