The world's most aggressive seal species!

Click through all of our Leopard Seal images in the gallery. 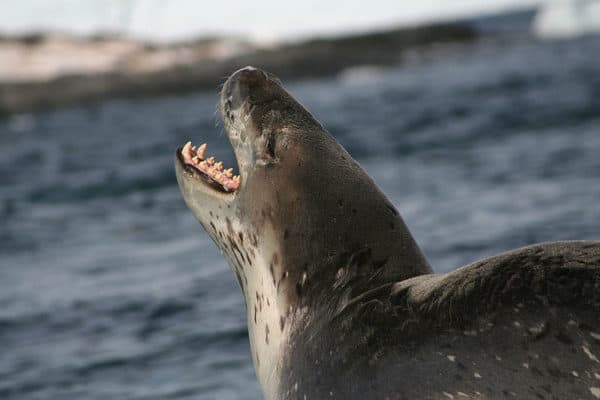 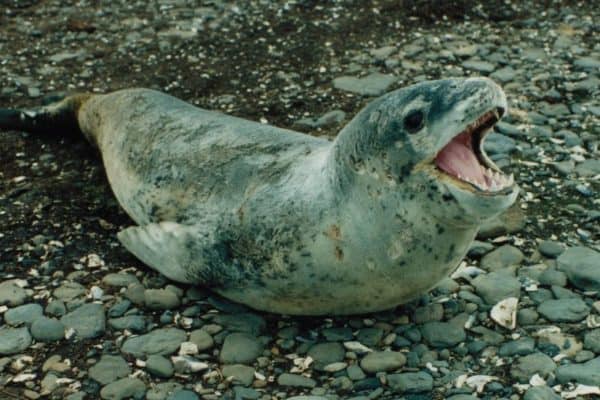 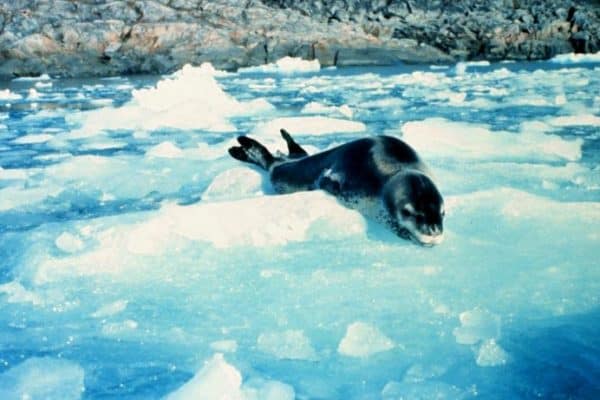 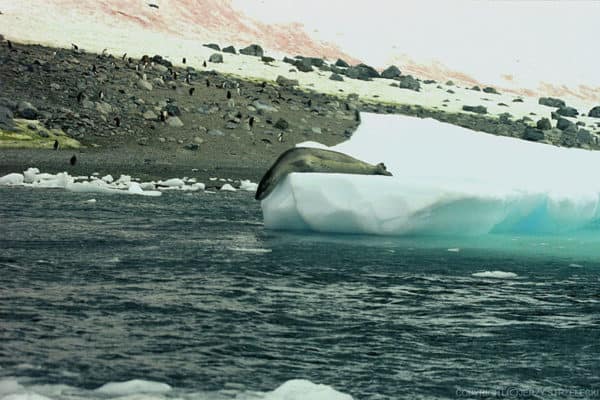 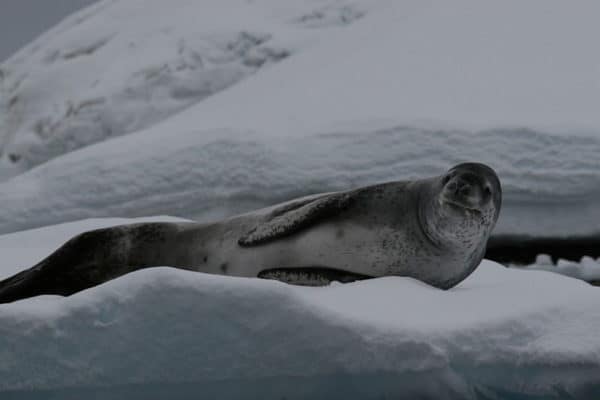 View all of the Leopard Seal images!

Clumsy on land but graceful in the sea, the leopard seal is a finely skilled predator that thrives in the frigid waters of Antarctica.

This highly distinctive species has a set of unmistakable features to help it survive in the wild, including blubber and flippers. With few natural predators and plenty of food, the leopard seal has tamed one of the most inhospitable environments on the planet. However, few people have ever seen one up close, since direct contact with humans is rare and fleeting. This has allowed the leopard seal to proliferate throughout the seas of the most southern extremes on the planet.

The scientific name of the leopard seal is Hydrurga leptonyx. Hydrurga means water worker, and leptonyx means slender or small-clawed in Greek. The leopard seal is the only living species in the genus Hydrurga. It also belongs to the family of Phocidae, meaning the earless or true seals. This distinguishes them from the eared seals of the family Otariidae. The leopard seal is most closely related to the Weddell seal, the crabeater seal, and the Ross seal, all of which live in the Antarctic.

These seals are actually a type of Carnivora — an order of mammals to which cats, dogs, and bears belong. Seals probably split from the rest of the Carnivoras some 50 million years ago. Since then, they have evolved special adaptations to suit life in the water. The larger group of seals, the Pinnipeds, also includes sea lions and walruses.

Leopard seals are long, smooth, carnivorous mammals with a rounded head, big snout, large mouths, and flippers on all four feet (which enclose both their elbows and knees). Covered in a thin coat of fur, this species can be identified by the dark gray or black colors on the head and back and the white or light gray around the belly. The most distinctive feature of the species is the black spots around the white parts of the body. This pattern resembles the big cat for which it’s named.

These seals can reach more than 12 feet in length and weigh more than a thousand pounds. That’s about as heavy as a grand piano. This makes them one of the largest and most imposing seals in the world. Females actually outweigh males by a considerable margin. This is the opposite of some Pinnipeds, such as the elephant seal, in which males are larger than the females.

Leopard seals are largely solitary creatures that live and hunt on their own. Their only sustained contact with other seals throughout the year is during the mating season. They often compete with each other to acquire food, but they can sometimes cooperate to take down prey as well. Despite its solitary nature, the leopard seal is nevertheless a highly vocal species. The large repertoire of calls includes trills, barks, and moans (which may vary with age) to help them establish territory and attract potential mates. They seem to have unique behaviors and rituals associated with certain stylized vocalizations and sounds.

Over millions of years of evolution, these seals have acquired specific adaptations to help it cope with the harsh realities of its cold marine environment. The thick layer of blubber provides special insulation from the frigid waters. Their bodies are shaped as smoothly as possible to minimize drag in the sea. Their front flippers, which are relatively large in relation to body size, allow them to steer with incredible agility and precision in the water, while their hind flippers provide speed and locomotion with a side-to-side stroke. It is believed that they can move up to 25 mph for short periods when swimming. However, leopard seals are very clumsy creatures on the land. They must force themselves forward by wriggling on their bellies and pulling their bodies up.

Fortunately, their cumbersome movement on land is not much of a hindrance. The leopard seals spend the majority of their lives in and around the water, occasionally coming up on the ice for rest, safety, and breeding. Just like the cetaceans, leopard seals can go a long amount of time between breaths of oxygen. Before diving underneath the water, the seal can collapse its lungs to deal with the water pressure. They also appear to have a higher concentration of oxygen-storing molecules in their blood. However, unlike many other Pinnipeds, leopard seals do not make particularly deep or long dives. They usually stay within a few hundred feet of the surface.

Although the leopard seal species has not been thoroughly studied, it is generally understood that seals (even the solitary species) are playful, smart, and inquisitive creatures. They seem to have an innate ability to perform limited tasks and follow commands. Some species (not necessarily leopard seals) are kept in captivity to entertain and educate people about marine life.

The leopard seal lives exclusively around the waters of Antarctica. This is its year-round home. However, the species has been sighted as far afield as South America, Australia, New Zealand, and South Africa. Their lives revolve around fidelity to the pack ice and nearby islands. They may migrate around their natural range throughout the year in response to the presence of ice floes and prey.

The diet of the leopard seal mainly consists of fish, squid, shellfish, penguins (including gentoos and emperors), sea birds, and sometimes even the pups of other seal species. With their sharp teeth, claws, and big powerful jaws, these carnivores have rightly earned a reputation as one of the fiercest predators of the sea. They are also one of the few seal species that consume other warm-blooded animals.

The krill appears to be a favorite food of the leopard seals. They have evolved specialized teeth that can strain out tiny prey from the surrounding water as they move. However, leopard seals will opportunistically attack and eat whatever they can find. Their diet can change based on the seasons and the availability of food. In order to catch more evasive animals, these clever hunters will lie in wait for prey or sneak up and snatch them directly from below the water. They will sometimes need to tear the prey apart first before it is small enough to be consumed.

The leopard seal is considered to be an apex predator that has few other natural predators in the wild. However, one of them is the killer whale. These clever creatures will hunt the seal either alone or in packs by deploying intelligent strategies to corner and consume them. There are also reports that sharks may sometimes attack and consume leopard seals, but actual observation of leopard seal predation is relatively rare.

Because the species occupies an extreme environment on the fringes of the world, humans are not a significant threat to them, apart from the occasional entanglements in fishing nets. However, climate change over the long term could pose a risk to the habitat on which the species relies for its survival. If the ice of the Antarctic melts or dissipates, then it will disrupt the seal’s breeding patterns.

The reproductive habits of the leopard seal remain something of a mystery to biologists. Because it is difficult to access the frigid environments of the Antarctic, actual leopard seal mating has almost never been observed directly. However, several facts can be inferred about the reproductive behavior of the species based on some documentation.

The species breeds only once every year around the months of December and January. It is believed that the leopard seal males will make certain vocalizations to attract and secure mates. Males are often quite aggressive and territorial in the competition for the right females. Once a couple has paired up, the actual mating process probably occurs in the water. However, the male does not stick around for the birth of the child. He usually departed following the end of the mating cycle.

Female leopard seals have a lengthy gestation period that lasts until around October or November (around ten months). The newborn seal is called a pup, and only a single one is born at a time. The young creature can weigh more than 60 pounds straight out of the mother’s womb. For the next four weeks, the female is responsible for raising and weaning the young pup on its own. Most of this time is spent on the ice floes, where the pup is mostly safe and secure from potential carnivores. The pup must learn quickly to swim and hunt because it will begin to live on its own shortly after being weaned. This allows the female to start mating again just in time for the breeding season.

Not much is known about the childhood development of the leopard seal. However, it is believed that sexual maturity usually takes several years to achieve. The leopard seal has been known to live up to 30 years in the wild, but the average life span might be less than this.

Due to the difficulty of surveying the Antarctic region, it is difficult to estimate precisely how many leopard seals are alive in the world. According to the International Union for the Conservation of Nature (IUCN) Red List, the leopard seal is a species of least concern. IUCN claims that there are at least 35,000 individuals in the wild, but this may be an undercount. Some estimates put the true numbers at above 100,000 or even 200,000.

Unlike other species, the leopard seal has not been traditionally hunted for its fat and fur, sparing it from rapid depletion. Despite this, they are protected by international conventions against hunting. However, the loss of Antarctic sea ice could pose a potential threat in the future by interrupting their breeding behavior.

View all 22 animals that start with L

How dangerous is a leopard seal?

Apart from scientific and research purposes, direct contact between humans and leopard seals is incredibly rare. However, due to its sheer size and strength, a person would not want to antagonize or provoke the creature. There have only been a few recorded leopard seal attacks, including a single death in 2003 involving an accidental drowning. But as human activity in the Antarctic becomes more frequent, contact between humans and leopard seals could increase.

Polar bears are far too large and dangerous for any creature (especially a solitary one like the leopard seal) to take on.

What do leopard seals eat - are they carnivores, herbivores, or omnivores?

Leopard seals feast on fish, squid, shellfish, penguins, sea birds, and smaller seals. Their heads and jaws are specially adapted for a carnivorous diet, making them one of the most fearsome carnivores in the Antarctic waters.

How big is a leopard seal?

What Kingdom do Leopard Seals belong to?

What phylum do Leopard Seals belong to?

What class do Leopard Seals belong to?

What family do Leopard Seals belong to?

What order do Leopard Seals belong to?

What genus do Leopard Seals belong to?

What type of covering do Leopard Seals have?

Leopard Seals are covered in Fur.

In what type of habitat do Leopard Seals live?

Leopard Seals live in cold waters in the southern hemisphere.

What are some predators of Leopard Seals?

Predators of Leopard Seals include humans, sharks, and killer whales.

What is the average litter size for a Leopard Seal?

The average litter size for a Leopard Seal is 1.

What is an interesting fact about Leopard Seals?

The Leopard Seal is the world’s most aggressive seal species!

What is the scientific name for the Leopard Seal?

The scientific name for the Leopard Seal is Hydrurga Leptonyx.