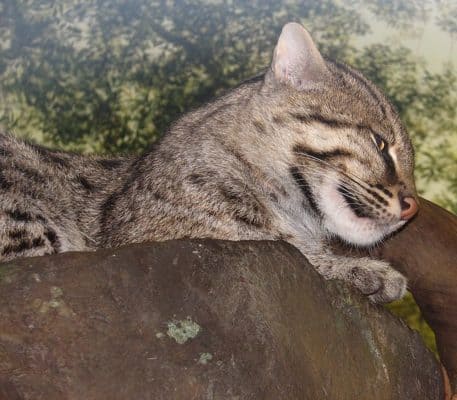 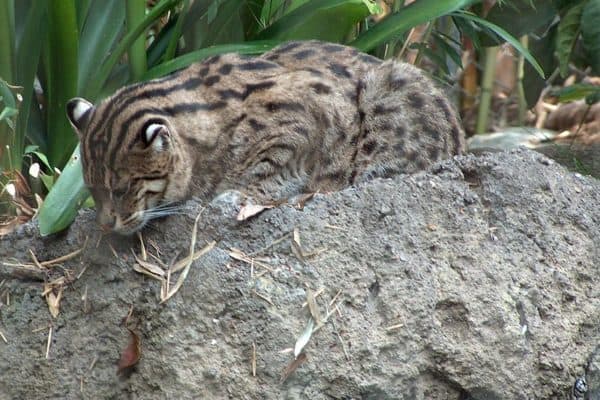 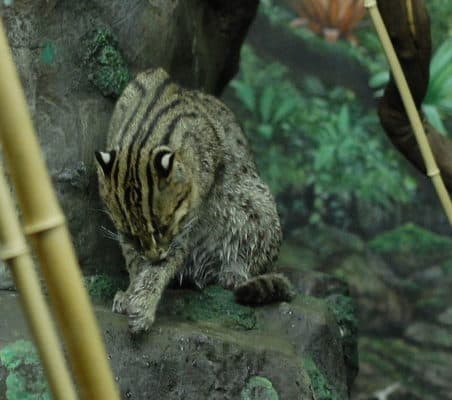 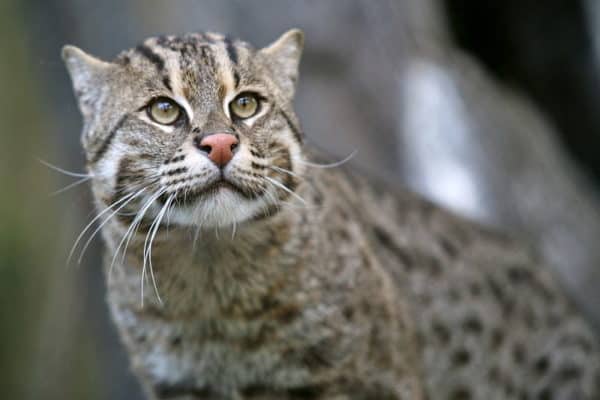 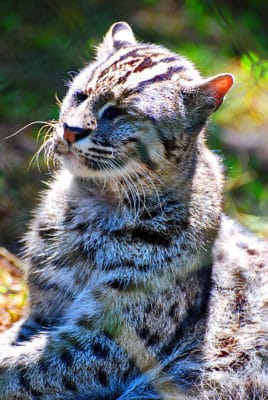 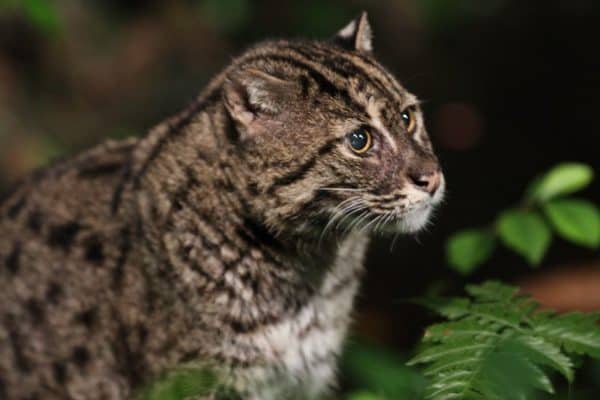 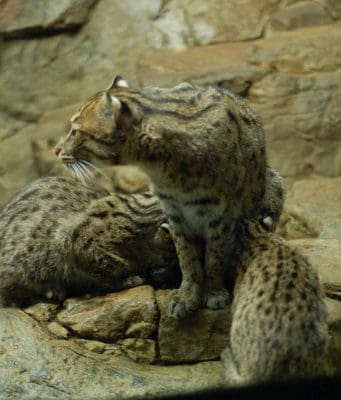 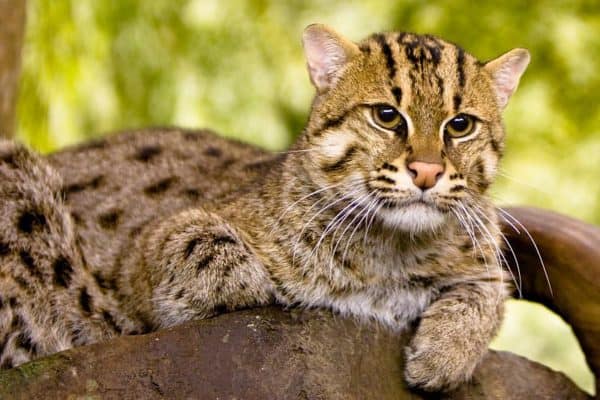 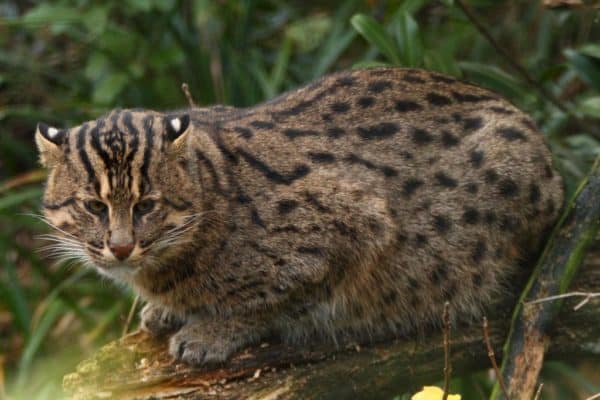 Scoops fish out of the water using its paw!

The Fishing Cat is a small to medium sized feline that is natively found throughout a number of countries in south-east Asia. Unlike other cat species found around the world (with the notable exception of the Jaguar) the Fishing Cat spends most of its life in areas of dense vegetation close to water and is an excellent swimmer. However, despite its water-loving lifestyle, the Fishing Cat is not particularly specially adapted to its semi-aquatic lifestyle with small teeth that are not well designed for holding onto slippery prey and only slight webbing between the toes on its front paws to help it to negotiate the slippery banks. Although the Fishing Cat is known to still be locally common in certain areas, the global population is severely under threat as it is thought that nearly 50% of their specific wetland habitats are under threat from increasing levels of Human activity throughout much of its natural range.

The Fishing Cat has a stocky and powerful body that is quite long in comparison to its short legs. Their short and coarse coat of fur is olive-grey in colour and patterned with solid black spots that run the length of its body and often turn into black lines along the spine. The Fishing Cat has a short and flattened tail that is marked with black rings and can be used by the animal when swimming as it works in a similar way to a rudder on a boat, steering the Fishing Cat in the right direction through the water. Their small feet are slightly webbed but not any more so than many other feline species, but one of the biggest differences between the Fishing Cat and its relatives is that their claws are not fully retractable with the tips still sticking out slightly from the protective sheath of skin on their toes (most felines are able to completely retract their claws to prevent them from becoming blunt when they are not in use). Fishing Cats have quite broad heads in relation to their body with small, rounded ears that are black on the back and have a distinctive white spot in the centre.

The Fishing Cat is natively found throughout a number of countries in south-east Asia including Bangladesh, Bhutan, Brunei, Cambodia, China, India, Laos, Malaysia, Myanmar, Nepal, Pakistan, Sri Lanka, Thailand and Vietnam along with the Indonesian Islands of Java and Sumatra. Although the Fishing Cat appears to have a wide geographical range, due to the fact that they prefer dense, wetland habitats they are only found in certain regions throughout these countries. Ideally, the Fishing Cat inhabits wetland areas where there is plenty of dense vegetation to provide cover both from predators but also to hide from potential prey, and can be found in a variety of aquatic regions that include mangrove swamps, rivers, lakes, marshes, reed beds and areas of forest close to streams. They are however, severely threatened throughout much of their natural range as wetlands are drained for agriculture or often polluted by industry in the area. It is thought that 98% of the globally significant wetlands throughout south-east Asia are under threat and could even disappear completely.

The Fishing Cat is a nocturnal and solitary hunter that rests amongst dense vegetation during the day before heading to the water at night to find food. They are incredibly strong and capable swimmers and have been known to swim vast distances often in pursuit of a fish trying to get away. Fishing Cats are largely territorial animals that occupy home ranges of up to 22 square kilometres (although the range of a female is often much less), with that of a male Fishing Cat overlapping the patches occupied by a number of females in the area. Fishing Cats are known to be relatively adaptable animals and in certain areas are even known to live around city suburbs with little vegetation and close to Human settlements. Their incredibly elusive and nocturnal lifestyle means that they are often hard to spot but are susceptible to being trapped, poisoned or accidentally caught in snares that are set-up to catch other forest animals, such as Deer.

Although little is really known about their breeding or social behaviour in the wild, mating is thought to take place in January and February when a female Fishing Cat will call to males in the area, indicating that she is ready to mate. After a gestation period that lasts for between 60 and 70 days, she gives birth to 1 - 4 kittens that weigh about 150 grams and are born blind. Fishing Cat kittens develop relatively slowly at first putting on an average of 11 grams in weight a day and don't open their eyes until they are just over two weeks old. At around 50 days old the kittens are able to start eating meat but are not weaned for at least another couple of months. Fishing Cats reach their adult size and are able to breed by the time they are nine months old and become completely independent of their mother about a month later when they leave to establish a territory of their own. Although it is thought that it is just the female who rears her young in the wild, captive males have been observed helping her to raise their offspring.

The Fishing Cat is a carnivorous animal that only hunts and consumes other animals in order to acquire all of the nutrients that it needs to survive. As its name suggests, aquatic animals make up the bulk of the Fishing Cat's diet with more than 70% of the food thought to be fish, followed by molluscs, frogs, snails and snakes that are found in or close to the water. Fishing Cats are also known to hunt small mammals such as mice on land and will even target larger prey like civets, dogs and livestock in areas close to settlements. Fishing Cats catch their prey in a couple of different ways but tend to dive into the water once a fish has been spotted before catching it in its mouth (they are even known to dive into quite deep water and can surface under aquatic birds to catch them). The other method they use involves them sitting at the water's edge either on the bank or a rock and using their paw, they lightly tap the surface in a way that mimics an insect to attract fish. Once it is close enough the Fishing Cat then scoops the fish out of the water using its paw and flicks it onto dry land before eating it.

Due to the powerful build and aquatic nature of the Fishing Cat they are thought to have very few (if any) real natural predators in the wild. However, the Fishing Cat is often found in areas where they share their habitats with larger carnivorous mammals such as tigers and bears which could be of threat to them. People are the biggest threat to the Fishing Cat as they have not only destroyed much of their unique wetland homes with increasing levels of industrial and commercial activity but they have also been known to hunt Fishing Cats over the years for their meat and fur. Despite now being a protected animal species, large seizures of Fishing Cat skins at local markets still occur which indicates that poachers are still decimating populations, particularly in certain areas. Another problem for Fishing Cats caused by Humans is the fact that in areas close to growing settlements, locals are often overfishing in the nearby lakes and rivers which means that the food available for the Fishing Cats is also declining fast.

The Fishing Cat was first described scientifically by Bennet in 1833 and was given its scientific name with the last past meaning "civet-like". Although they are not closely related at all, the Fishing Cat has a long, stocky body with short legs and a short tail which makes it look remarkably similar to these small carnivores. Although Fishing Cats tend to be most commonly found in a variety of watery lowland habitats, they are also known to inhabit areas at elevations of up to 5,000 ft depending on the waterways in the area (a small population is actually found in parts of the Himalayas). The Fishing Cat is classed as part of the Leopard Cat lineage which means that its ancestors would have evolved around 6 million years ago. Other members of this feline group include the Leopard Cat itself, the Pallas Cat and the Flat-Headed Cat, to which the Fishing Cat is most closely related.

Due to the fact that the Fishing Cat is seldom seen in the wild as they are nocturnal and their preferred habitats would have been quite inaccessible to people for some time, until the middle of the last century they were locally common throughout much of their native regions. However, the hunting of them by people for their meat and fur has obliterated populations in many areas and even today, they are still illegally killed in their hundreds to sell their skins onto the black market. The biggest problem facing the Fishing Cat though, is the drastically increasing levels of Human activity in their natural environments that is severely affecting not just the Fishing Cats, but also the incredibly unique and bio-diverse wetland habitats in which they live. Water draining for agriculture and to make way for roads, growing Human settlements and high levels of industry that pollutes the water with toxic substances has reduced their once vast natural range by nearly 50%.

Today, the Fishing Cat is listed by the IUCN as an animal species that is Endangered in its natural environment and could therefore be threatened with extinction in the not too distant future. The biggest threat to the Fishing Cat is habitat loss with many of their remaining pockets of wetland homes now considered to be protected areas (illegal activity in these areas though is still contributing to the loss of species in these regions). Conservation projects have been set up in a number of areas to protect both the Fishing Cats and their unique wetland habitats and the hunting and trade in the species is now illegal. Poaching however, still continues with skins still being seized from markets in the far east.