The only known canine with a purple hue. 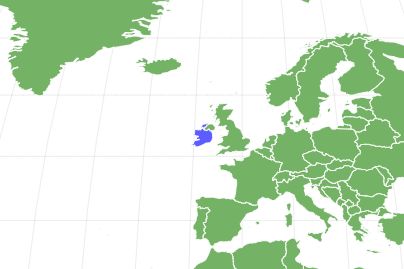 Irish Water Spaniel as a Pet:

View all of our Irish Water Spaniel pictures in the gallery.

View all of the Irish Water Spaniel images!

The athletic and sporty Irish water spaniel’s breeding is almost entirely based on folklore and theory, but it is a lovable, quiet dog. With a hypoallergenic coat, it is in high demand, and the appeal is even greater due to its long lifespan (10-12 years), even though it comes at a high price. It isn’t quite as outgoing as other variations of water spaniels, but it is much healthier overall.

If you’re looking for an intelligent pup with natural curiosity, the even temperament of the Irish water spaniel could be a good match for you.

3 Pros and Cons of Owning an Irish Water Spaniel

Built for swimming, the average height of the Irish water spaniel is anywhere from 21-24 inches, ensuring that it is directly in between the size of a medium and large dog. It has a waterproof coat, and this dog is typically between 45 and 68 pounds in size.

Taking care of the Irish water spaniel and its health needs is crucial to maintaining its long lifespan. The dog is typically pretty healthy, so there aren’t a lot of problems to worry about, especially if the dog is bred with a reputable person. A rescue may have less information about the genetics of the dog, though it isn’t impossible to find one.

Hip and elbow dysplasia is relatively common, which is often due to the long legs of this animal. The condition can be quite painful, so it is best to bring it to a doctor if these bones are causing your dog to limp.

Health and Entertainment for your Irish Water Spaniel

Some dogs are prone to allergic reactions to medications. Even Ivermectin – which is a medication that is typically used to deworm the dog – can cause a bad reaction. Make sure to look for any side effects from the medication that could be a threat.

Thyroid disease is relatively common. This type of condition impacts the dog’s hormones, making it difficult for the metabolism to respond properly.

Overall, the typical issues that impact this breed include:

The personality of the Irish water spaniel is highly curious and alert. Though other spaniels are typically more outgoing, this specific breed exhibits particularly reserved behavior when it meets strangers. Luckily, this breed doesn’t become aggressive with strangers, only alerting its owners if it feels that a threat is nearby. Since this breed is still rather independent, the Irish water spaniel also tends to test its owner’s limits.

The genetics, training, and socialization of the Irish water spaniel will be the determining factors in the dog’s overall temperament. To get the best idea of their inherited traits, see if it is possible to meet siblings from the litter or the parents. The best way to keep an even temperament is to expose the dog to different sights and sounds at a comfortable pace. If there are local “puppy schools” in your area, enrolling in them can be incredibly helpful for social skills.

Though the Irish water spaniel is relatively active, they won’t keep anyone up at night. They don’t use their voice very much, and the majority of the sounds that owners will end up hearing from this pup are only to warn the family about potential threats. That’s part of the reason that this pet is such a good watchdog. However, this desire to take care of their family is part of the reason that they struggle with anxiety.

How to Take Care of an Irish Water Spaniel

With any rescue dog, there are specific ways that you should care for them to ensure that they are happy, healthy, and thriving. The Irish water dog is relatively easy to care for, but it is still important to consider certain factors. Adopting a puppy or a full-grown dog as a pet is a big choice, but these tips should easily prepare you.

High-quality dog food is encouraged for the Irish water spaniel, though it doesn’t matter if the food is prepared at home (under the recommendation of a veterinarian), or it is commercially prepared. The dog’s age plays a major role since senior dogs will need more hydration and puppies will need more vitamins and protein. If purchasing a commercial dog food, look for the age that the particular bag is meant for.

As an adult, this spaniel needs about 1.5 to 2.5 cups each day, but the total amount should be divided into two meals.

While treats are always a helpful incentive during training, feeding the dog too much can cause them to gain far too much weight. The only nourishment that this dog should have consistent access to is a fresh bowl of water.

One of the advantages of the breed is that it doesn’t shed very much. However, it still requires consistent care. With some gentle brushing and regular cleaning of the ears and nails, care can be done on a weekly basis. The breed is known for the hypoallergenic coat, but you’ll need to start with trimming every two months to keep it neat. If you aren’t taking care of this coat yourself, take this pup to an experienced groomer.

As long as the Irish water spaniel gets enough exercise during their day, they will be easy to train. They are eager to make their owner happy, and they like to work hard to show their intelligence. The sessions should be fun and engaging, and they will respond to positive reinforcement throughout the training.

This dog is so willing to show love and obedience that it is often trained as a therapy or assistance dog.

With all of the high energy of the Irish water spaniel, it definitely needs to have an outlet for its active nature. It doesn’t take much activity to make them happy, and they are extremely easy to train if they get the exercise that they require. Whether you take this pup on a long walk, a jog next to a bicycle, or chasing a ball around at the park, all of these efforts will meet the mental and physical demands they have.

One of the favorite activities of the Irish water spaniel is to swim. They are particularly strong swimmers, and they love to get plenty of time in the water as it is needed.

Grooming efforts need to start when the dog is still in their puppy stage, even though they won’t need a lot of upkeep. Starting early allows you to establish this time as a positive experience.

To get the best chances of positive interactions with children, the Irish water spaniel should be raised with them around. Early exposure is the best, but all children should have your supervision around the dog while they are learning to interact together. Children should not be allowed to roughly play with this breed by pulling their ears or tails, and your dog should not be allowed to bite.

Just like with children, any animals should be introduced to the Irish water spaniel early as well. They are natural hunters, and they may see small animals as a type of prey.

If the Irish water spaniel is difficult to find, or you want a different breed that suits your lifestyle, there are many other species available. Consider the Australian labradoodle, English setter, or the Epagneul Pont Audemer.

The Irish water spaniel has been featured in a few television shows, including a UK-based series in the 1980s called The Irish R.M. A few celebrities even have called these dogs their companions, including Justin McCarthy (who allegedly created the breed).

As easy to train as these dogs are, their introverted personality may be the reason that more of them have not been included in movies and television shows.

Some of the common names of the Irish water spaniel include:
– Bailey
– Sasha
– Mara
– Sammy
– Bobby
– Holly
– Phoebe

Despite their adaptability to almost any routine or home, Irish Water Spaniels still require a high-energy lifestyle that requires plenty of exercises.

How much does an Irish Water Spaniel cost?

In general, they are not aggressive toward humans or children. However, their breeding creates a tendency to attack prey like fowl and rodents, which is likely to follow them into non-work situations.

While Irish Water Spaniels can be left alone for short periods of time, prolonged time alone can cause them to become very mischievous.

How big is an Irish Water Spaniel?

Depending on sex, care, and general health, Irish Water Spaniels weigh between 45 and 68 pounds.

While these Spaniels are typically family-friendly, supervision with young children is always a good idea with any dog.

How long does the Irish water spaniel live?

With tentative grooming and medical care, the Irish Water Spaniel has an average lifespan of 10-12 years, though some can life longer.