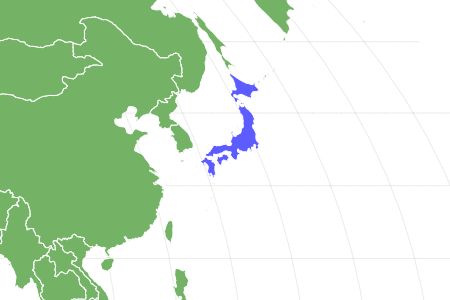 Japanese Chin as a Pet:

View all of our Japanese Chin pictures in the gallery.

View all of the Japanese Chin images!

It’s the perfect companion for an owner who likes to sit on the couch to read or watch movies. Japanese Chins belong to the Toy group.

The history of this dog goes all the way back to the 1600s. They were owned by emperors, princesses, and other royalty. Images of these dogs have been spotted on ancient pieces of pottery and artwork found in Chinese temples. Despite their name, these dogs are believed to have originated in China. They are thought to be close relatives of the Tibetan spaniel. This is not hard to believe considering the similarity in the appearance and colors of the Japanese Chin and the Tibetan spaniel. Pekingese are also relatives of these dogs.

This tiny dog was originally bred to be a companion to its owner. Its soft coat and delicate steps make it more cat-like than dog-like.

A Japanese Chin is a Toy dog with a coat of medium length hair. A male is 10 inches tall at the withers and a female is 9 inches tall. Both males and females can weigh up to 12lbs. Puppies weigh about 4lbs at 8 weeks old. They are considered fully grown at 9 months.

Health and Entertainment for your Japanese Chin

These descendants of the Tibetan spaniel have some common health issues. One of them is heart disease. It usually comes to older dogs in the form of a weakened heart valve. Another health issue is patellar luxation. This is a condition where the knee slips out of the proper position. Sometimes the dog can move its leg in a way that realigns its knee while more severe cases require medical treatment. Portosystemic shunt is another health issue particular to small dogs like these. It’s a condition where the liver doesn’t receive proper blood flow and can’t remove toxins from the bloodstream.

This toy dog also has strabismus. Strabismus is a condition where the dog’s eyes are out of alignment and go in different directions. This is not a health problem, but it’s a condition that can affect the dog’s depth perception.

The most common health issues of Japanese Chins include:

These dogs have a sweet personality. This is one of the things that makes them an ideal choice for a family that wants a lap dog. Other notable traits of this dog include intelligence and loyalty. A Japanese Chin is the type of dog that follows its owner around as he or she goes about daily tasks.

Its curiosity is almost cat-like! In fact, cats and Japanese Chins share a lot of traits. These dogs are great at climbing onto chairs and other furniture. Another thing that makes them cat-like is they groom themselves by licking their paws and rubbing their faces.

This breed is a good dog for families with older children. Sometimes a the dog can display jumpy behavior around toddlers and young children because they have a tendency to fall and do unexpected things. Generally, older children are able to be more careful around this dog and understand the need to treat it with gentleness.

These little dogs are suspicious of strangers and will usually alert the household when someone appears at the door.

How to Take Care of a Japanese Chin

Learning how to take proper care of this pet can help it to enjoy a long, healthy life with the family. The right diet and proper exercise both contribute to the vigorous health of this Toy dog.

Feeding a puppy or an adult Japanese Chin a balanced diet can prevent some of the common health issues connected with this breed.

Japanese Chin puppy food: The main ingredient should be protein. Protein helps a Japanese Chin to build muscles and gives it energy for playtime. Omega fatty acid and DHA help in a puppy’s brain development and contribute to healthy vision. This is important for a dog that has strabismus. Vitamin E and selenium in food support a puppy’s immune system. Vitamin E contributes to a healthy liver and other organs. Calcium helps in the development of strong bones and teeth.

Japanese Chin adult dog food: Protein and carbohydrates are important ingredients in food for an adult Japanese Chin. They give energy to a dog and support healthy muscles. Fiber helps with an adult dog’s digestion. Vitamin C and E support vision health. Fatty acids support a healthy coat and skin.

How much do Japanese Chins shed? These dogs shed an average amount of hair. But, with a simple grooming routine, an owner doesn’t have to deal with a lot of loose hair around the house.

A Japanese Chin has a single layer of hair that is both long and silky. Brushing this dog once or twice per week can help to prevent tangles and remove loose, dead hair. A pin brush is an ideal grooming tool for brushing your Japanese Chin. Be sure the pins of the brush have plastic or rubber coverings on the ends. This protects a dog’s sensitive skin.

These dog’s sometimes have bald spots or itchy areas of skin due to allergies. These skin conditions may appear in the springtime if the dog is allergic to pollen or similar particles floating in the air.

Japanese Chins are relatively easy to train. Keep in mind that these are dogs with a sensitive nature. So, using a harsh voice during training is not going to be effective. Plus, it’s not a kind thing to do.

This lapdog responds best to a calm voice, treats, and words of praise. Though these dogs can have an independent streak, they are very intelligent and can pick up obedience lessons fairly quickly. The Pekingese is another dog with a sensitive nature that needs to be trained with words of praise.

Though this companion dog is small, it does require regular exercise. Taking it on a walk for 20 minutes per day is a good exercise routine. Owners should keep the pace slow because of this dog’s short stride.

These dogs are playful and sometimes enjoy a game of fetch with a ball they can grab and release easily. A small, fenced-in yard is appropriate for this dog as long as there are no holes or other places where it could injure itself.

Taking this dog to a dog park is not a good idea because it could be injured by larger dogs exercising there.

This dog is an ideal choice for someone who lives in an apartment as long as the person is able to give it a short walk each day. Learn more about the best dog breeds for city living here.

When it comes to a Japanese Chin puppy, one thing to keep in mind is its diet. Overfeeding a toy puppy can cause obesity. So, an owner has to find a diet that gives the dog energy to play and explore while not overfeeding.

These dogs do best in a family with older children. Unfortunately, smaller children can make this companion dog nervous and wary. Remember this dog is always concerned about being injured due to its tiny size. Small children running around or trying to grab the dog are likely to cause the dog to growl or even bite.

Dogs Similar to the Japanese Chin

Other breeds similar to these dogs include the Pekingese, the Shih Tzu, and the Pug.

These dogs have been companion dogs to royalty for centuries.

Some popular names for this breed include:

How much does a Japanese Chin cost to own?

What is a Japanese Chin?

A Japanese Chin is a lap dog originally bred in China. This Toy dog was created to be a companion to members of royal families. It’s an affectionate, intelligent dog with a loyal nature. It’s been described as cat-like due to its grooming habits.

What does Chin mean in Japanese?

Are Japanese Chins good with kids?

This dog descended from the Tibetan spaniel, is good with older kids. Smaller kids are likely to make a Japanese Chin nervous about being injured by accident.

Do Japanese Chin bark a lot?

This lapdog doesn’t bark much at all, but they will alert a family of someone at the door.

No. These toy dogs are known for their docile, affectionate nature.

How long does Japanese Chin live?

The lifespan of a Japanese Chin is 10 to 12 years.

Japanese Chins are Omnivores, meaning they eat both plants and other animals.

What Kingdom do Japanese Chins belong to?

What class do Japanese Chins belong to?

What phylum to Japanese Chins belong to?

What family do Japanese Chins belong to?

What order do Japanese Chins belong to?

What type of covering do Japanese Chins have?

Japanese Chins are covered in Hair.

What genus do Japanese Chins belong to?

What is an interesting fact about Japanese Chins?

What is the scientific name for the Japanese Chin?

The scientific name for the Japanese Chin is Canis lupus.