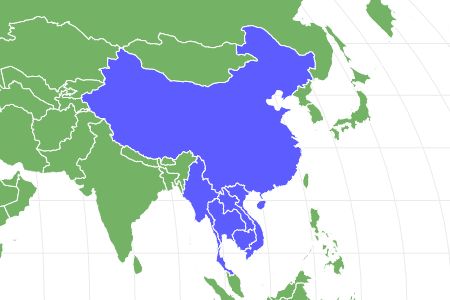 View all of our Mekong Giant Catfish pictures in the gallery.

View all of the Mekong Giant Catfish images!

The Mekong giant catfish is widely regarded as the largest purely freshwater fish in the world (excluding the species that migrate between saltwater and freshwater like the sturgeon). With their huge mouths and low-set eyes, these large shark catfish trawl the waters of the mighty Mekong, feeding on huge quantities of plant matter every day.

Unfortunately, due to years of exploitation and neglect, this species is now a sad reminder of the need for more sustainable fishing practices and development. There is still a lot we don’t understand about this species, and it may become extinct before we can learn more.

The scientific name of the Mekong giant catfish is Pangasianodon gigas. It’s not entirely clear where the genus name Pangasianodon comes from. It may be a combination of Pangasius, a local word for the shark catfish, and a Greek term meaning without tooth (referring to its toothless mouth). The species name gigas simply means giant in Greek. The only other living member of the genus is the iridescent shark catfish. Both species belong to the family of Pangasiidae, or the shark catfish, which are endemic to southern Asia.

The Mekong giant catfish is thought to be the largest freshwater fish in the world. One specimen was documented to be about 10 feet long and some 646 pounds in weight, but it’s been suggested that they can grow even larger than this. Featuring a round, blunt head and a long body, the Mekong giant catfish has a dull gray or white appearance, usually darker on the upper half. Another distinguishing feature is the low-set eyes, which actually appear below the mouth line.

Unlike other types of catfish, the adults of this species do not have whiskers (also called barbells) or teeth of any kind, perhaps on account of their herbivorous diet. The juveniles are born with whiskers (which help them find food in the underwater environment), but they slowly diminish with age.

The Mekong giant catfish is endemic to the lower Mekong River of Southeastern Asia. It was once more widespread throughout the entire river system, perhaps reaching as far as China, but population numbers have fallen by around 90% since the 20th century.

It’s thought that only a few hundred individuals may be remaining; this is based on the number of fish caught rather than a true population estimate. The culprits for its decline appear to be infrastructure development, overfishing, pollution, and mineral runoff, and dam construction, which diverts its natural spawning route. Habitats are also fragmenting, which makes it more difficult for the fish to congregate together in the spawning season.

The Mekong giant catfish is currently classified as a critically endangered species by the IUCN Red List. Conservationists have tried to breed this fish in artificial ponds as a last-ditch effort to save the entire species, but so far all efforts to introduce them back into the wild have met with failure.

The Mekong giant catfish occupies an unusual place in the freshwater food chain. Despite being large and intimidating, this species shows no predatory behavior at all. They are kind of like any large herbivorous animal, not to be messed with by potential predators.

What eats the Mekong giant catfish?

On account of its size, the Mekong giant catfish has very few natural predators in the wild besides humans.

What does the Mekong giant catfish eat?

Adult giant catfish largely feed on plants and algae. The juvenile feeds on tiny animals floating in the water.

The Mekong giant catfish is a migratory species. At the beginning of the rainy season, they will travel upstream to reach the spawning locations from their childhood. Scientists believe that the species once had a much larger migratory range, depending on their location. Today the few remaining specimens move between the Tonle Sap Lake in Cambodia and the part of the Mekong River in Thailand.

Upon hatching, the young fish feed on small zooplankton (tiny water-based animals), and if food is scarce, they will sometimes even cannibalize each other. After a year, they will switch to their adult herbivorous diet and start eating plants.

These are among the fastest-growing fish in the world, reaching more than 400 pounds in six years. It’s estimated they have a total lifespan of about 60 years in the wild. There is presumably a lot of attrition in the first few days and weeks after hatching, so only a small number of fish ever reach full adulthood.

This creature has been harvested by local fishers in the region for many thousands of years. At the height of the overfishing craze, millions of tons could be caught every year. On account of the falling numbers, it is now illegal to catch this fish in Thailand, Laos, and Cambodia. Enforcement can be spotty, however, and the rules don’t necessarily stop poachers from killing them and selling them to Vietnamese restaurants.

How many Mekong giant catfish are left?

The best estimate suggests that only a few hundred remains. However, this is based on the declining number of fish caught rather than a true attempt to count the numbers.

What is the largest Mekong catfish ever caught?

The largest-ever known specimen reached about 10 feet long and weighed some 646 pounds.

How big can a Mekong catfish get?

It’s thought that this species could potentially exceed 700 pounds in weight, but no giant catfish of this size has ever been definitely recorded.

The Mekong giant catfish is completely herbivorous. It does not eat meat. And even if it did, very few freshwater fish are so predatory that they would ever eat humans.

Where do Mekong catfish live?

The Mekong giant catfish can be found throughout the Mekong River system in Southeastern Asia.