Known for their calm and peaceful nature! Click through all of our Molly images in the gallery. 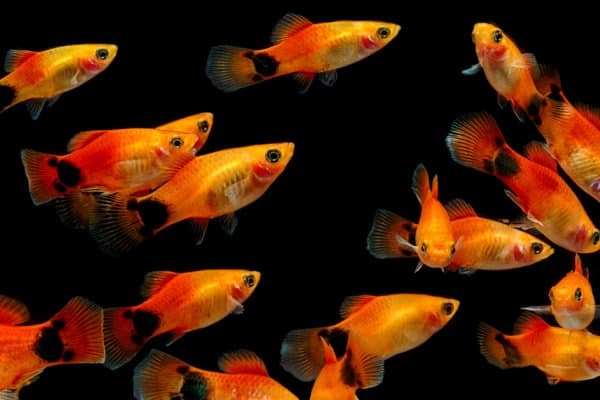 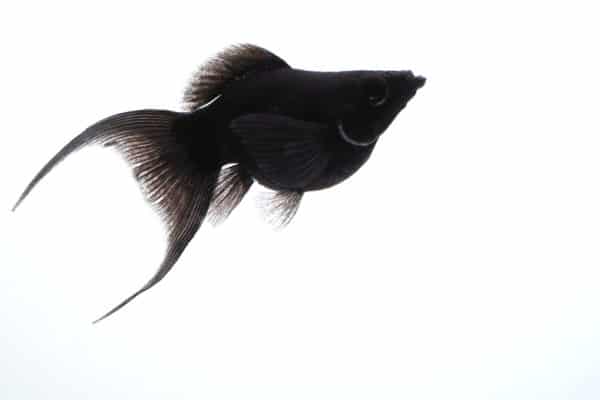 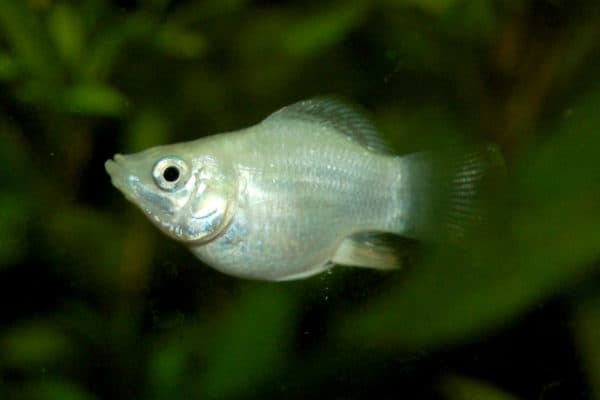 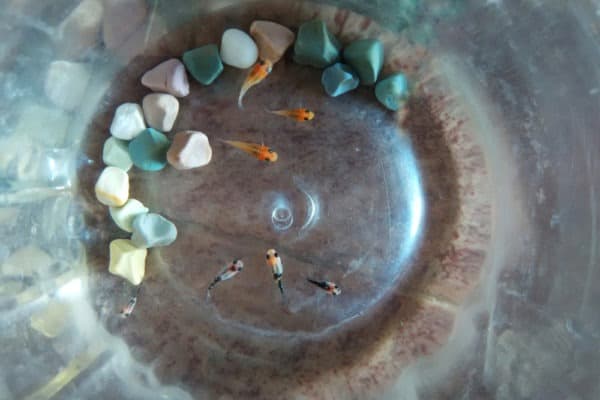 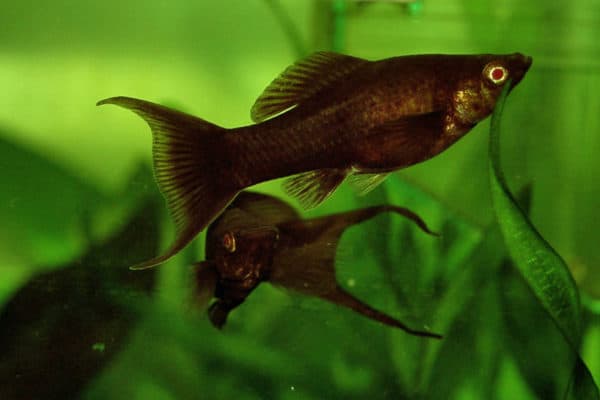 View all of the Molly images!

There are more than 40 recognized species of the Molly fish, but only a handful of them are popularly kept in aquariums.

First identified by naturalists during the 1820s, molly fish are American fish that are primarily found in the wild in areas of North and South America. Since around 1899, the molly has been a popular fish to keep in freshwater aquariums. All species of the molly fish are able to hybridize with one another, so their appearances span many colors, patterns and configurations. Most species still have large populations in the wild, so this fish is not considered to be endangered. Technically omnivores, they feed primarily on plant materials.

The molly fish belongs to the Poeciliidae family and is part of the Poecilia genus. The term “Poecilia” means “many colored.” It is derived from the Greek word “poikilos,” which means “with a lot of colors.” This reflects the fact that these fish tend to vary considerably in terms of the colors and patterns that they exhibit.

Different species of molly fish have different scientific names. For example, the common, or short-finned, molly is known as Poecilia sphenops. “Sphenops” means “wedge appearance” and refers to the fact that this species’ fins are stubby and wedge-shaped. The sailfin molly, which is also known as the topsail molly, is scientifically known as Poecilia latipinna. “Latipinna” means “broad fin,” which reflects the fin shape of this particular species. Finally, the Mexican sailfin molly is known by the scientific name Poecilia velifera. “Velifera” means “sail-bearing,” which refers to the unique sailfin that is found on this species.

In the wild, the common molly exhibits a dull, silvery color. While their bodies tend to be light gray in color, mating males may exhibit more of a greenish-blue color. The sides, backs and dorsal fins of many mollies are dotted with rows of spots. These spots can be so crowded together that they almost become one large pattern.

Most species of molly fish have chunky, thick-set bodies; rounded fins; tall, angular dorsal fins; and pointed heads and mouths. Their upturned mouths are designed to help them to skim the upper layer of the water, which is rich in oxygen. Their tails are convex.

Unlike many fish, mollies don’t travel in schools; rather, they travel in shoals. In a shoal, multiple fish band together for social reasons. In a school, they do so to travel in the same direction together. Approximately one-quarter of all fish shoal their whole lives, and the molly is one of them. They tend to shoal in the hundreds, and the male-to-female ratio is usually around one to two.

Top feeders, mollies use their upturned mouths to exploit films of oxygen-rich surface water. As a result, they are tolerant and able to survive in oxygen-depleted habitats. Although peaceful, mollies are also active swimmers. Male mollies occasionally exhibit aggressive behavior, and they are known to aggressively pursue females. They provide no parental care to their young, and adult mollies often prey on young mollies.

Mollies are diurnal, which means that they are awake by day and asleep by night. They are good community fish, and males tend to establish hierarchies.

American fish, mollies are mostly found in the wild in areas of North and South America. However, over the last few decades, they have been introduced in countries like Japan, Taiwan, Singapore, Israel and even parts of Eastern Europe.

Molly fish prefer to live in shallow surface waters. In the wild, they are usually found in loosely vegetated coastal streams. However, these fish are known to do well in lakes, estuaries, deltas, swamps, ponds, marshes and even in ephemeral places like roadside ditches. They prefer to stay under floating vegetation or near structures to stay out of view of predators. Ideally, they like water with a pH range of between 7.5 and 8.5 and a temperature of between 64 and 82 degrees Fahrenheit.

Different species of mollies are found in different places. The common molly, for example, is typically found throughout Mexico down through northern South America. The sailfin molly is found along the Gulf of Mexico and along the southeastern coast of the U.S. The Mexican molly is located in southeastern Mexico and is primarily found in the coastal Yucatan.

Molly fish are technically omnivores because they not only consume plant materials but are also known to consume crustaceans, insects and worms. However, their diets overwhelmingly consist of plant materials, so these fish are practically herbivores. Mollies particularly enjoy algae, but they are known to consume vast amounts of other phytoplankton.

Mollies are not endangered. The Mexican molly, for example, is not listed on the IUCN Red List of Threatened Species, and the common molly is listed as Data Deficient. This means that enough data does not exist to determine whether or not the fish should be regarded as endangered. However, it is believed that most species have fairly large, steady populations in the wild. The sailfin molly has a status of Least Concern, which means that it is unlikely to be considered an endangered species any time soon.

In terms of predators, the molly’s biggest threat comes from larger fish. Because many species of molly are quite small – especially male mollies – they tend to be easy pickings for larger fish like largemouth bass. Aquatic birds, aquatic insects, amphibians, reptiles and even mammals may all seek out the fish as prey. That is especially true because mollies are surface feeders. Although they tend to hide under vegetation and other objects, they must emerge to feed – and that is when they become vulnerable to predators.

Additionally, mollies occasionally fall prey to other mollies. These fish are not particularly aggressive, but they are known to fin-nip – a common problem in aquarium settings. Their fry are also vulnerable to being attacked and eaten by male mollies, so young mollies must be kept separate from males in aquariums.

Prolific breeders, molly fish have 28-day gestation periods and typically have anywhere from 50 to 100 live fry per period. However, gestation periods may vary depending on water temperatures. Females can produce live fry every 30 to 40 days or so, and 70 percent of the fry tend to be female. Male mollies tend to aggressively pursue female mollies, and it is less taxing for females if at least two are kept for every one male in aquariums. Mollies are live bearers, which means that they give birth to live fish instead of laying eggs.

Young mollies reach sexual maturity at very young ages, so their populations can grow rapidly. In the wild, molly fish tend to live for about a year after reaching sexual maturity. However, in aquariums, these fish may live for an average of three years; it’s not unheard of for some to live for as long as five years. Male mollies have higher mortality rates, which is largely explained by the fact that they are smaller and therefore more susceptible to predators. However, they also tend to be more susceptible to diseases.

Young molly fish immediately must fend for themselves in the wild. Parents do not provide any sort of care for them after birth.

These fish are able to hybridize with all other species of molly fish, which is why selective breeding of these fish is so popular. Hybridization of molly species through the years has resulted in a huge assortment of colors, patterns and tail shapes – another reason that these fish are so popular in aquariums.

Although many mollies are found in the wild, many others are kept in aquariums. In fact, it is believed that many molly fish in the world are many generations away from being in the wild after being bred in captivity for years. Because these fish are prolific breeders, it is unlikely that their populations will dwindle. Of course, environmental changes can affect their ability to breed because the gestational period of these fish varies depending on things like water temperature and salinity.

What kinds of fish can live with mollies?

Ideally, molly fish prefer to live with other mollies. It is best for there to be many females and just a few males to keep the females from becoming overly stressed. Other types of fish that do well with mollies include angel fish, neon tetras, gourami, suckermouth catfish, goldfish, platys, green swordtail fish, guppies, cichlids, southern platyfish and Siamese fighting fish.

How long does a molly fish live for?

The average lifespan of a molly fish is two to five years. In the wild, however, they tend to live for about a year after reaching sexual maturity. Sexual maturity tends to occur at a very young age. These fish breed prolifically and constantly; such fish don’t tend to have extremely long lifespans. Male mollies have shorter lifespans than females mostly because they are much smaller and are therefore more susceptible to predators.

Generally speaking, mollies are peaceful fish. However, they are known to occasionally nip each other’s fins. Males can be aggressive toward females due to mating needs, so it is best to keep multiple females with one male. Male mollies are also known to eat young mollies, including recently born fry.

Are mollies carnivores, herbivores or omnivores?

Although their diets are mostly herbaceous, mollies also consume crustaceans and worms and are therefore considered to be omnivores.

No, mollies are not classified as being endangered. However, some molly species have much higher populations than others.

What Kingdom do Mollies belong to?

Mollies belong to the Kingdom Animalia.

What phylum do Mollies belong to?

Mollies belong to the phylum Chordata.

What class do Mollies belong to?

Mollies belong to the class Actinopterygii.

What family do Mollies belong to?

Mollies belong to the family Poeciliidae.

What order do Mollies belong to?

Mollies belong to the order Cyprinodontiformes.

What genus do Mollies belong to?

Mollies belong to the genus Poecilia.

What type of covering do Mollies have?

Mollies are covered in Scales.

In what type of habitat do Mollies live?

Mollies live in rivers in the Amazon Rainforest.

What are some distinguishing features of Mollies?

What do Mollies eat?

What are some predators of Mollies?

Predators of Mollies include large fish, birds, and reptiles.

What is the average clutch size of a Molly?

What is an interesting fact about Mollies?

Mollies are known for their calm and peaceful nature!

What is the scientific name for the Molly?

The scientific name for the Molly is Poecilia.

What is the optimal pH for a Molly?