Click through all of our Northern Inuit Dog images in the gallery. 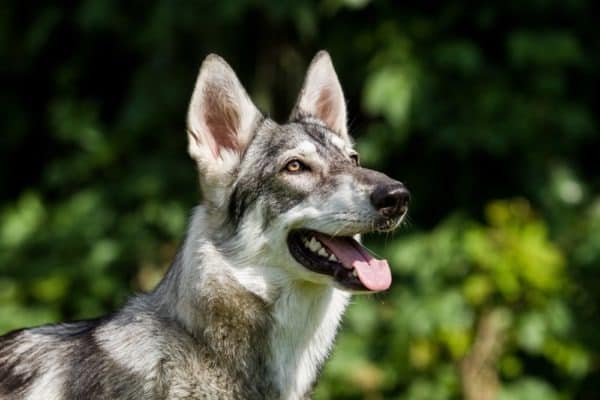 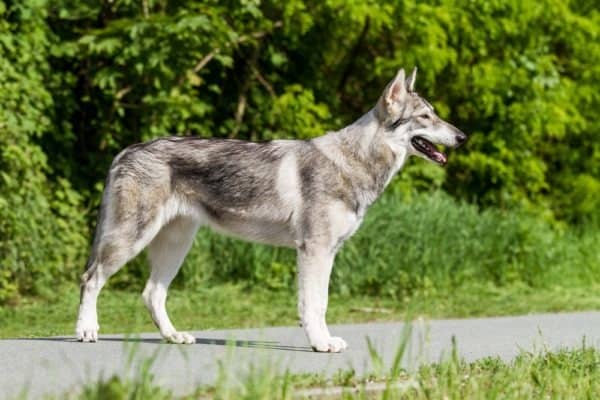 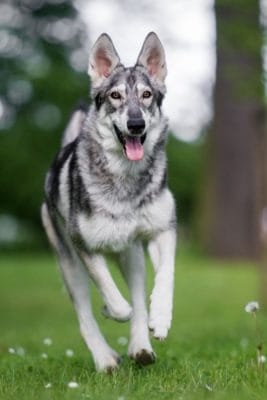 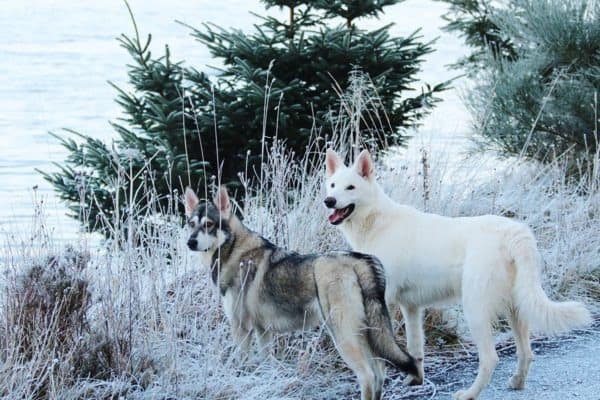 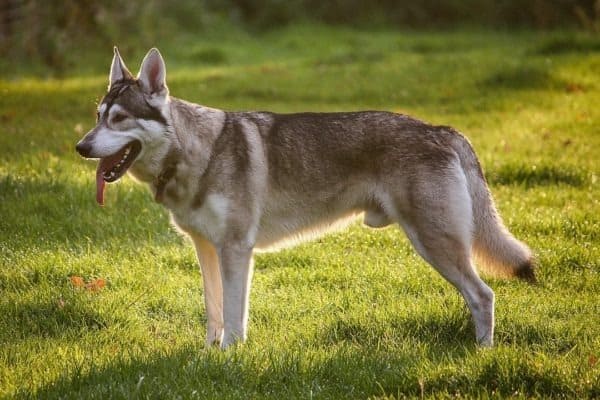 View all of the Northern Inuit Dog images!

They were bred from dogs such as Siberian Huskies, German Shepherds, and Alaskan Malamutes to look just like a dog while still retaining positive traits that are associated with domesticated dogs. This breed’s lifespan is between 12 and 15 years.

Northern Inuit Dogs can make a great family pet. They are very loyal and friendly. However, they can be a challenge to train for first time owners, so this breed will do best with an experienced owner.

Before you bring home a Northern Inuit dog, there are a few common health concerns that this breed faces that you should know about. Reading about these health concerns can help ensure that you are ready to provide the highest levels of care possible for your dog.

Hip dysplasia is one health concern you should be aware of. Hip dysplasia is an inherited condition where a dog’s hip bone and thighbone don’t connect together properly. This causes the bones to rub together, which gets painful over time. Dogs with hip dysplasia may develop a limp.

These dogs may also suffer from cryptorchidism. This is a condition in which both or one of the dog’s testes do not drop. Dogs with this problem will need to be castrated, but can then go on to live a normal life.

Another potential health concern for this breed is degenerative myelopathy. This progressive disease affects a dog’s spinal cord beginning around the time they are 8 to 14 years old. At first, dogs will seem to be uncoordinated and may appear to drag their feet. Eventually, degenerative myelopathy will progress to the point that a dog is unable to walk at all.

To review, a few potential health concerns for these dogs include:

These Inuit Dogs have a very loyal and friendly personality. These traits make this breed a great option for family. Northern Inuit dogs are also loyal and intelligent dogs.

However, owners will need to make sure that their higher activity level needs are met, or they could engage in destructive behaviors. This breed can be a bit strong-willed, so they will do best with an experienced owner who knows how to properly train them.

How to Take Care of a Northern Inuit Dog

Before planning for how you’ll care for your Northern Inuit Dog, you should think about the nutritional needs, common health problems, temperament, and other unique characteristics of this breed.

Many of these dogs have a sensitive stomach, so choosing a high-quality dog food is essential. Many dogs do well with kibble from a reputable manufacturer that contains a good amount of proteins and fats. You may also choose to feed them a raw diet. Whichever option you select, be sure to stay away from foods that are too sugary as these could be bad for their health.

Very young dogs (under the age of six months) have smaller stomachs and will need to eat between three and four times every day. After a puppy is six months old, he should be fine transitioning to eating about twice a day.

These dogs are very heavy shedders, particularly during their shedding seasons in the fall and spring. During these shedding seasons, you will need to brush your dog every day to reduce the amount of hair that is left around your home. During other times in the year, brushing your dog a few times a week should be sufficient.

They should not be bathed too frequently. Their coats are designed to repel dirt, and bathing them too often could cause it to lose these properties.

In addition to brushing your dog, be sure to brush their teeth, clean their ears, and trim their nails on a regular basis.

These dogs can be a challenge to train. They do best with an experienced trainer who has worked with the breed before. Whether training your dog yourself or looking for obedience training classes near you, look for options that use positive reinforcement. This breed will not respond well to training methods that use negative reinforcement.

Socialization from an early age is also very important with this breed. This will help your dog learn how to interact with people and other pets. It will also help them learn how to act in different situations.

These Inuit Dogs are an active breed, but don’t need as much exercise as some other breeds. You should strive to give your dog between an hour and an hour and a half of exercise each day. Taking your pup for two walks a day and playing with them inside or in the backyard can help fulfill their need for exercise.

There are not many breeders in North America that offers Northern Inuit Dog puppies. For this reason, you may find long waiting lists to bring home a puppy. Also, unless a breeder lives near you, be prepared to arrange to transportation of a new puppy to your home.

Always choose a reputable breeder and avoid adopting a puppy from a puppy mill. Puppy mills do not provide the same level of care to the dogs and don’t take health concerns or temperament into account when breeding dogs.

Before you bring a dog home, make sure your home is ready. Remove anything that could be potentially dangerous to a puppy from your space. Purchase food and all the other necessary supplies that your dog will need so you have everything ready when you bring home your new dog.

When trained and socialized from an early age, these dogs can make an excellent pet for a family with children. They are very friendly and loving dogs who do well with children. Even they are tolerant around children, you should always closely supervise your children when they around this breed or any other dog breeds. This will reduce the chances of an accidental injury to either the dog or the child.

Tamaskans, Siberian Huskies, and Alaskan Malamutes are three dog breeds that have some things in common with these dogs.

Because of their wolf-like appearance, these dogs have been used to play wolves in different TV shows and movies. Most famously, this breed was used to play young Direwolves in Season 1 of HBO’s Game of Thrones series. These Inuit Dogs were also used to play Rollo in the Outlander series from Starz.

The list below is designed to provide you with some inspiration if you are looking for the perfect name for your Inuit dog.

View all 14 animals that start with N

How much does Northern Inuit Dog cost to own?

Other expenses you should consider before adopting a dog include veterinary bills, training classes, food, toys, and supplies. Expect the cost for these to be highest your first year. You could spend $1,000 or more your first year with your new dog to purchase everything you’ll need. Each of the following years, you should still expect to spend $500 to $1,000 to care for your dog.

Yes, Northern Inuit Dogs are good with kids. They are very loving and friendly. It will be important to begin training and socializing your dog from a very early age to make sure they know how to interact with children.

The lifespan of a Northern Inuit Dog is between 12 and 15 years.

A Northern Inuit Dog can make an excellent pet. This breed is extremely friendly and enjoys spending time with his family. It will be important to make sure your dog gets plenty of exercise; this is not a good breed for individuals who are not very active. They can also develop separation anxiety, so you also shouldn’t choose this breed if no one is home for most of the day.

Is a Northern Inuit a wolf dog?

While Northern Inuit Dogs look very much like a wolf, they are not actually wolf dogs. They were crossbred from dogs such as Alaskan Malamutes, Siberian Huskies, and German Shepherds so that they would resemble a wolf while maintaining the even temperament of a domestic dog.

How big are Northern Inuit Dogs?

Yes, Northern Inuit Dogs shed. At some points in the year, it will be a more manageable amount, but during their shedding seasons in the fall and spring, they will shed a lot of hair. You will need to brush them every day to prevent their hair from being left all over the house.

Northern Inuit Dogs are Carnivores, meaning they eat other animals.

What Kingdom do Northern Inuit Dogs belong to?

What phylum do Northern Inuit Dogs belong to?

What class do Northern Inuit Dogs belong to?

What family do Northern Inuit Dogs belong to?

What order to Northern Inuit Dogs belong to?

What type of covering do Northern Inuit Dogs have?

What type of covering do Northern Inuit Dogs have?

What is the scientific name for the Northern Inuit Dog?

The scientific name for the Northern Inuit Dog is Canis lupus.