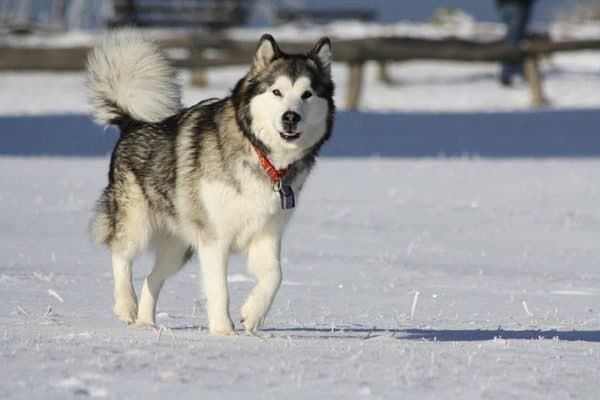 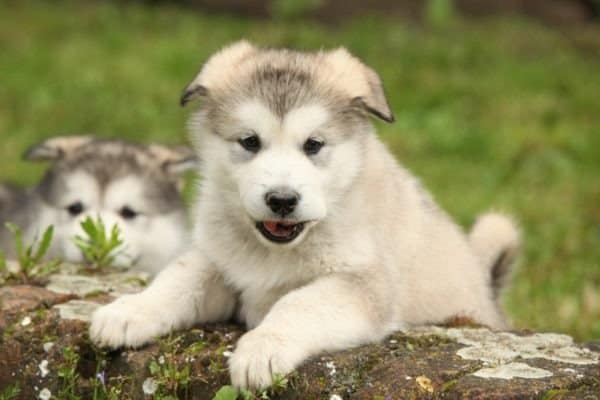 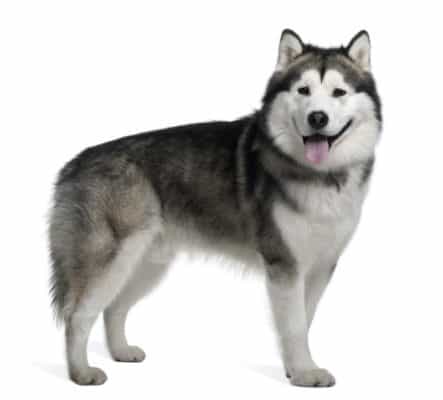 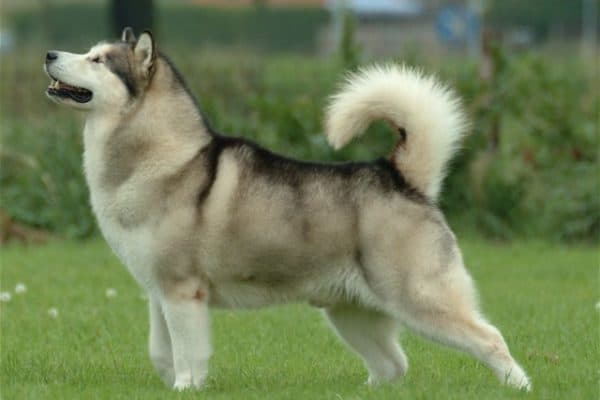 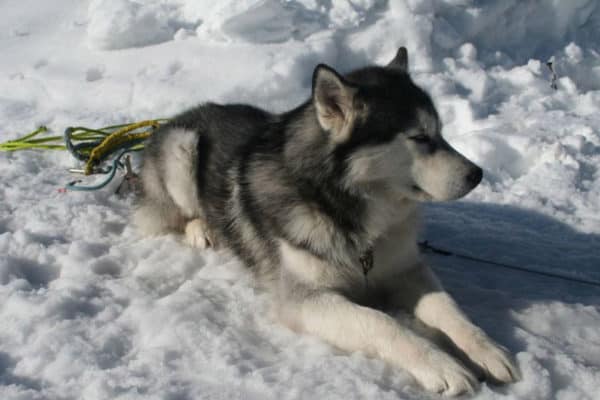 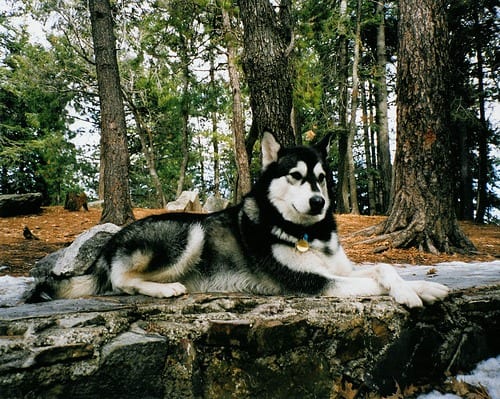 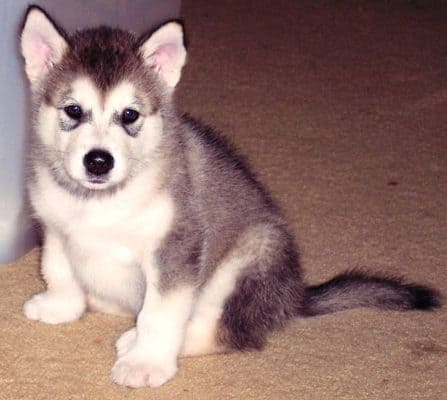 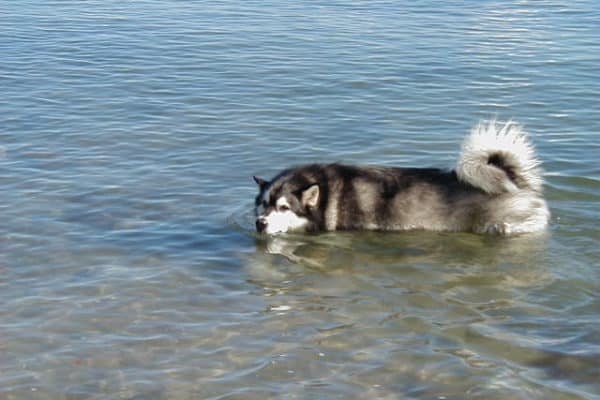 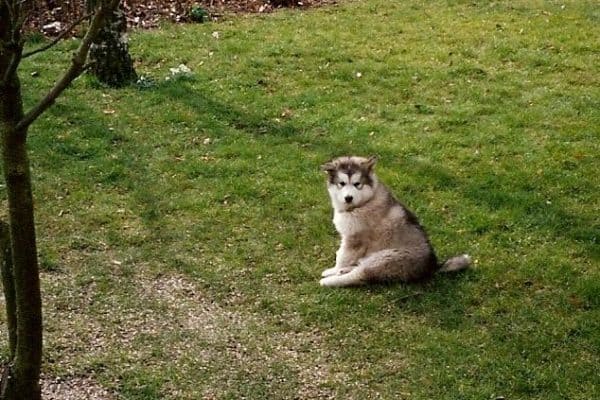 This post about Alaskan malamutes may contain affiliate links to our partners. Purchasing through these helps us further the A-Z Animals mission to help us educate about the world’s species so we can all better care for them.

The Alaskan malamute is a member of the spitz family of dog breeds and was bred by the Inuit people to pull their sleds. They have a similar appearance to the Siberian husky, but when they stand side by side, the giant, fluffy malamute dwarfs the husky. This breed is friendly, intelligent and full of energy, which makes them the perfect pet for an active family. They do have a bit of a stubborn streak, however, so owners need to establish themselves as the leader right from the start with gentle but consistent training.

Alaskan malamutes love spending their time around people, including strangers, so they don’t make good guard dogs. Their high energy and need for near-constant attention can make caring for a malamute a bit of a handful, but with time and patience, this breed will make a wonderful companion for people of all ages.

3 pros and cons of owning an Alaskan Malamute

Alaskan malamutes are sturdy, muscular dogs whose breed was created for sled pulling. They have dark, medium-sized eyes and small triangular ears. The most striking feature of this breed is the distinctive markings on their faces, which are mostly white with a colored bar or mask near the eyes. Their thick fur comes in a variety of colors, like black and white, grey and white, or red and white, and their beautiful, fluffy tails curl gently over their backs.

Alaskan malamutes are large working dogs. They weigh between 75 and 100 pounds and stand between 23 and 25 inches tall at the shoulder. The males of this breed tend to be a bit larger than the females.

The most striking difference in appearance between malamutes and huskies is their size, with the malamute being much larger than the husky. Huskies have smaller heads, and their ears are closer together than the malamute. They are also well-known for their bright blue eyes, whereas malamutes, like most other breeds, have brown eyes. Both breeds have a variety of fur colors, such as black, grey or red markings on white bodies, but only the Siberian husky can have agouti coloring.

Like many other large breeds, Alaskan malamutes often fall victim to hip and elbow dysplasia. They are also prone to clotting issues due to a hereditary condition called thrombopathia. Inherited polyneuropathy is another hereditary disease that breeders should screen for in their breeding animals. This disease can cause limb and facial paralysis, spatial disorientation and slowed heartbeat. Malamutes may also face health issues like chondrodysplasia (dwarfism), hypothyroidism, day blindness and von Willebrand’s disease.

As with any purebred animal, the key to reducing these complications is responsible breeding. Make sure your new pup comes from a reputable breeder, and have him evaluated by a veterinarian to make sure he has a clean bill of health.

In summary, the biggest health threats to the Alaskan malamute are:

Alaskan malamutes are friendly, intelligent and energetic. This breed won’t make a good guard dog; he would rather befriend strangers than defend his home against them. Although the malamute was bred as a pack dog, he is just as content with his human pack as he is with other dogs. Unlike the other breeds in the spitz family, malamutes are fairly quiet dogs. They will “talk” to their owners and let loose the occasional howl, but they aren’t nuisance barkers.

Alaskan malamutes have a strong prey drive, so they aren’t suitable for households with small animals. They also need to be secured at all times; even well-trained malamutes may run from their masters if the mood strikes them.

How To Take Care of an Alaskan Malamute

Alaskan malamutes have no particular dietary concerns and should be able to stay healthy on high-quality dog food. As with any breed, make sure you feed your malamute according to his healthy weight maintenance requirements, taking care to include his treats when calculating his daily caloric intake.

Like other large dog breeds, Alaskan malamutes are susceptible to hip dysplasia, and their purebred status leaves them at risk of several hereditary disorders, so it’s important to find an insurance company that will cover these types of conditions. As such, it’s a good idea to get comprehensive pet insurance when you bring them home. The younger they are, the less likely they will be to have pre-existing conditions that could disqualify them from coverage.

Alaskan malamutes are fairly low-maintenance dogs. They don’t have a strong odor and only need bathing every 6 to 8 weeks. Their coats don’t need any special trimming, but they do need brushing a few times a week to cut down on hair fall. These dogs shed all year round and go through a blowing season twice a year. During the blowing period, you will need to brush your pup every day to keep hair from building up around the house.

Beyond coat care, their maintenance routine is simple. All you need to do is brush their teeth and clean their ears often, and trim their nails each month to keep your Malamute happy and healthy.

You should start training your malamute puppy as soon as you bring him home. He is very bright and will pick up on your commands quickly. Due to their intellect, these dogs can be quite stubborn, so owners need to establish themselves as the leaders right from the start. Without proper training, your malamute will own you rather than the other way around. Consider enrolling your pup in obedience classes to help him develop a calm personality.

With the origins of a working dog, this breed has endless stores of energy. Vets recommend a minimum of two hours of exercise daily to keep your malamute in a generally relaxed state. Without a proper outlet for his energy, he will turn to destructive behaviors to occupy his time.

Before you bring home your Alaskan malamute puppy, you should puppy-proof your home. This breed is notoriously destructive when bored or full of energy, and puppies fit both of these categories frequently. To release some of his energy as a young puppy, you’ll need to get safe toys for your malamute to play with. He will also need a safe space to sleep; as such, crate training is highly recommended.

Since this breed is highly intelligent, training can begin as soon as you bring your new pup home. At 8 to 9 weeks, he can begin to learn basic commands such as sit and stay in a controlled environment. This light but consistent training will help you form a bond with your new puppy and show him right from the start that you are his leader. As soon as he is old enough to have the required vaccinations, you should consider enrolling your pup in puppy kindergarten to help with proper socialization and obedience training.

Due to their friendliness, playfulness and affectionate nature, Alaskan malamutes get along wonderfully with children. As such, they make fantastic family dogs. As with any large breed, it’s important to teach both dog and child how they can safely interact with each other. Remember, no matter how well-behaved your dog is, to prevent accidental injuries, you should never leave them unsupervised with children.

Dogs Similar to the Alaskan Malamute

A few breeds that are similar to Alaskan Malamutes are:

A few of the most popular names for Alaskan malamutes are:

What is an Alaskan malamute?

Alaskan malamutes are working dogs that originated in Alaska, where the Inuit people bred them to pull heavy loads on their sleds. They are similar in appearance to the Siberian husky, but a side-by-side comparison will quickly show onlookers that the giant, fluffy malamute dwarfs the medium-sized husky. Due to this difference in size, malamutes were bred for endurance rather than speed; it was their job to pull heavier loads over a longer period.

How much does an Alaskan malamute cost?

The cost of an Alaskan malamute depends on the breeder and can range anywhere from $500 to $2,500 depending on pedigree. If you’d rather get your malamute from a rescue, you can expect to pay between $200 and $400 in rehoming fees.

Although Alaskan malamutes often end up on the list with the most dangerous dog breeds, this is due to a misunderstanding of the breed. It is a large breed, and it has a hulking appearance, so its exuberance is often mistaken for aggression. Malamutes do have a strong prey drive and shouldn’t live with smaller animals, but they love humans and are nearly always quite friendly with people of all ages.

What is the difference between a Siberian husky and an Alaskan malamute?

The main difference between huskies and malamutes is their size. On average, malamutes are quite a bit bigger and stronger than huskies. Malamutes also tend to be more affectionate with their human families and get along just fine in only-dog households, whereas huskies prefer to have at least one other dog in their pack.

How big do Alaskan malamutes get?

Alaskan malamutes weigh about 75 to 100 pounds and stand between 23 and 25 inches tall at the shoulder. The males of this breed are slightly larger than the females.