The Norwegian Buhund once worked on Norse homesteads 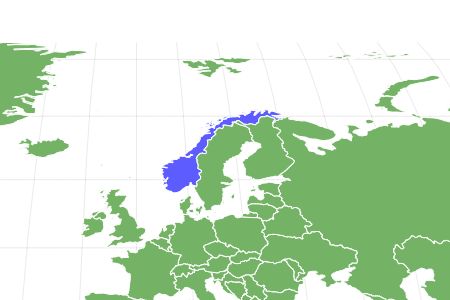 Norwegian Buhund as a Pet:

View all of our Norwegian Buhund pictures in the gallery.

View all of the Norwegian Buhund images!

The Norwegian Buhund is an all-purpose farming and herding dog that originated from the coasts of Norway and was once associated with the Vikings. It is characterized by a rather square body, erect ears, a curled tail, and a long muzzle. The dense double coat of fur, which consists of a thick outer coat and soft, woolly undercoat, is normally colored black or wheaten with a black mask on the face or white markings around the body. The fur is longest around the neck, chest, and thighs and shortest on the head and front of the legs.

Spitz (meaning “pointed” in ancient German) is the name for this type of northern cold-weather working breed with dense fur. It is closely related to the Icelandic Sheepdog and the Jamthund, both of which originated with the Norse. Evidence for the dog’s ancestry dates all the way back to 900 AD, possibly earlier. Archaeologists found a Viking grave from this time that contained the remains of an early Buhund. However, it only became a separate and definable breed, distinct from other Norwegian herding dogs, around 1600 AD.

3 pros and cons of owning a Norwegian Buhund

The Norwegian Buhund is a medium-sized dog with an athletic build and decent height.

The Norwegian Buhund is a very healthy breed with an excellent lifespan of 12 to 15 years, but it may be prone to several conditions, including cataracts, cancer, a blood clotting issue called von Willebrand’s disease, and hip dysplasia, in which the hip joint slips lose from time to time, causing pain and lameness.

There are a few things you, as an owner, can do to ensure your dog is healthy and maximize its potential lifespan. The first is to do plenty of research into breeders around your area. You will want to go with someone who has given their dogs a thorough medical evaluation. Second, you should schedule regular visits to the vet to check for common health issues. In summation, these are the most common health problems with the Norwegian Buhund:

Health and Entertainment for your Norwegian Buhund

The Norwegian Buhund combines a sweet, gentle, happy-go-lucky personality with a very strong eagerness to please its owner. Thanks to their alert temperament, their wariness of strangers, and strong tendency to bark, they also make for good all-around watchdogs. However, this is probably not a breed you would want to leave alone for many hours at a time. Whether you live alone or with your family, they want to be involved in all household activities and work hard for you.

How to Take Care of the Norwegian Buhund

The highly adaptable Norwegian Buhund is a good choice for all types of living situations and experience levels. While it does require a lot of daily exercise and some effort to train, this breed is very amenable and eager to learn.

The Norwegian Buhund should be fed a few cups of high-quality dog food every day. You may need to alter the amount depending on your dog’s age, size, and activity level. While this dog doesn’t have a big obesity problem, you may want to limit the number of daily treats.

The good news is that the Norwegian Buhund’s double coat of fur will remain naturally clean and odorless without much intervention. It sheds dirt very easily and practically dries itself after a bath. Owners still need to brush it about two or three times a week, though perhaps daily during the shedding season.

Another important aspect of the dog’s care will involve regular ear checks to prevent or clean infections; a cotton swab and a cleanser will usually suffice. You should also trim the nails about once a month or at least enough to prevent them from clicking loudly on the floor. Finally, you should brush the teeth on a regular basis with some kind of toothpaste recommended by the vet.

The Norwegian Buhund is intelligent and eager to please, but owners might struggle a bit to deal with its independent streak and tendency to become bored easily. This can be overcome by the use of positive reinforcement methods involving food and clicker training. Since this breed does have a sensitive side, it’s not a good idea to raise your voice or get mad at it. Other than that, owners should strive to be creative but consistent with their commands. Always make your meaning clear and obvious.

The Norwegian Buhund needs more than an hour of exercise at least twice a day to obtain optimal health. It enjoys hiking, fetching, jogging, and even running next to you on a bicycle. This breed will also benefit from the stimulation that comes with obedience and agility activities.

The Norwegian Buhund needs to begin proper socialization and training from the moment it’s brought home. This can include early classes, daycare, trips to the park, and other activities. Otherwise, if you neglect this vitally important task, then your pet might develop some anti-social behaviors as an adult. Crates can be a useful training tool for puppies. Dogs seem to instinctively seek out small spaces and won’t soil where they like to sleep. While they work best for young dogs, crates may prove to be useful over the entire course of the dog’s life (especially if you adopt one as an adult).

After a few months, owners should start teaching their puppies more advanced commands and really begin to understand their body language. If you lack the time and effort to do it yourself, then many professionals offer a full spectrum of different training services, from the very basics to the more advanced stuff. The most important factor in any training class, however, is to be comfortable with the teaching methods of the instructor. Some trainers may let you sit in on classes to observe them first.

The Norwegian Buhund and Children

The Norwegian Buhund is fairly good with children, but it does prefer to be around adults. If you have small children in your home, then you should always supervise all interactions between them and the dog.

Dogs Similar to the Norwegian Buhund

The Norwegian Buhund is most similar to several other types of Nordic spitz dogs.

The Norwegian Buhund is unfortunately not very well-known in the United States, and there are relatively few examples of famous dogs from this breed.

Popular Names for the Norwegian Buhund

If you’re still trying to find a good name for your new Norwegian Buhund, then you might want to consider one of the following options:

Is a Norwegian Buhund a good family dog?

The Norwegian Buhund is a good overall family pet, but it might not be quite as affectionate toward children as adults. Keep in mind that the personality of the individual dog can always vary. Some might be more affectionate than others.

Do Norwegian Buhunds bark a lot?

Yes, the Norwegian Buhund does have a reputation has a loud, high-pitched barker. It will respond to almost any moving object it sees. If you can’t tolerate its barking, then this is probably not the right breed for you.

Is a Norwegian Buhund hypoallergenic?

While individual reactions will always vary, the Norwegian Buhund is generally not considered to be a hypoallergenic breed. It sheds about a moderate amount.

What breeds make the Norwegian Buhund?

The Norwegian Buhund is an ancient breed whose origin is now lost. It resembles several other Norwegian dogs, which probably shared a common ancestry at some point in the past.

Where can you buy a Norwegian Buhund?

In order to avoid health and behavioral issues, the best place to obtain a new puppy is from a high-quality breeder in your area. The AKC and other kennel clubs maintain a list of good breeders to choose from. Puppy mills and other sellers of dubious origin are the last place you should look. If price is a concern, however, then it’s possible to find a good pet from a rescue, an adoption shelter, or an individual seller. Some adult dogs may come with behavioral issues, but they’re always in need of a loving home. The point is, you should always do your homework first.

How much are Norwegian Buhund puppies?

A new puppy from a high-quality breeder will probably cost about an average of $1,200. If you’re interested in a show dog or any other dog with a great pedigree, the price will be much higher. If, on the other hand, you want to adopt, then the price might be less than $300.

What is the correct pronunciation of Buhund?

What are some popular Norwegian Buhund mixes?

The Norwegian Buhund can be mixed with any other kind of breed. For instance, it’s possible to produce a Labrador Retriever mix, a Great Pyrenees mix, and a Dachshund mix.