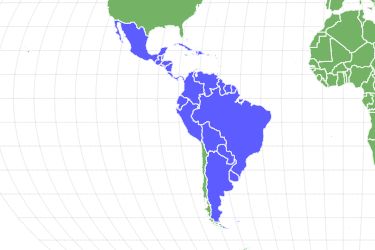 View all of our Ocelot pictures in the gallery.

View all of the Ocelot images!

The Ocelot is a medium-sized small cat that is native to the jungles of South America. The Ocelot is also known as the Painted Leopard due to the beautifully distinctive markings on its fur as it displays dark rosettes, along with spots and stripes. Similar in colouration to the much smaller but closely related Margay, the Ocelot is an animal that was nearly driven to extinction in the 20th century as they were commonly hunted for their fur. Today however, national protection throughout much of their natural range has meant that the Ocelot population has been able to recover somewhat. The Ocelot is a strong and agile animal that can not only climb and run well but they are also good swimmers as they are not afraid of water like numerous other cat species.

The Ocelot is an animal with short and thick, velvety fur that is usually tawny-yellow to reddish-grey in colour and marked with black chain-like rosettes on its back and sides. There are dark spots on their legs and stripes on their head and face which are distinctive to the individual. They have a long tail that is generally marked with dark rings and large paws in relation to their body size. Like all feline species (with the exception of Cheetahs) the Ocelot can retract its claws into protective pockets that prevent them from becoming blunt whilst the Ocelot is walking about. Males tend to be substantially larger than females and can grow up to a meter in length with a tail half their body size on top of that. The Ocelot has sharply pointed front teeth which are used for biting down on its prey and blade-like teeth in each cheek that are used for tearing up food.

The Ocelot is found throughout the South American tropics but is most common in the dense jungles of the Amazon Basin. They are however, fairly widespread and inhabit a variety of different habitats from southern Texas to northern Argentina. The Ocelot is an incredibly adaptable animal that can be found in variety of habitats including tropical forests, grasslands, mangrove forests and marshes providing that there is plenty of dense vegetation. Although the Ocelot is usually found below 1,200 meters above sea-level, they are also known to inhabit the high slopes of the Andes Mountains and have been found at heights up to 3,800 meters. As strong swimmers, they are also sometimes found in seasonally flooded forests and have been reported as living close to Human settlements.

The Ocelot is a solitary animal that occupies a home range that can be up to 30 square kilometres depending on the surrounding environment. Males tend to patrol territories that are often double the size of the females’, and one which overlaps the home ranges of a number of females (with which the male has breeding rights). The Ocelot is a nocturnal animal that spends the days sleeping either in thick vegetation or on a high and leafy branch. They have excellent sight, touch and hearing which all help them when hunting at night, and they communicate between one another using soft meows which turn into loud yowls when looking for a mate. The Ocelot is an incredibly secretive animal that is very rare in some parts of its natural range and one that relies heavily on dense vegetation, only venturing into open areas during the night.

In the heart of the tropics, Ocelots are known to breed all year round but at the most northern and southern ends of its natural range, the breeding season tends to occur towards the end of the summer. After mating, the female Ocelot will find a crevice in the rocks, a hollow tree or will nest in a dense and thorny thicket in order for her to have some privacy and protection whilst she is preparing to give birth. Following a gestation period of up to 85 days the female Ocelot will give birth to 2 or 3 kittens, which are born blind and have a thin coat of dark fur. Within a month, the Ocelot kittens can view their surroundings and their fur will have become much denser and more colourful. Although Ocelot kittens are fully grown by the time they are a year old and are capable of becoming independent, they will often be tolerated in their mother’s home range for a couple of years before they leave to establish a territory of their own.

The Ocelot is a carnivorous animal that hunts for food under the cover of night and does so by stalking its prey primarily on the ground. Although small mammals such as rodents make up the majority of its diet, they are known to hunt a variety of small animals including rabbits, birds, fish, crabs, lizards and snakes and will even hunt small deer on occasion. The Ocelot is also known to eat monkeys, turtles, armadillos and anteaters but have been known to cause problems by killing domestic birds when there is not enough food available. As the Ocelot happily preys upon numerous different animal species, they are a vital part of their local ecosystems and their vast menu also helps them to more easily adapt to varying habitats.

Not only is the Ocelot an important predator in its environment but they are also preyed upon by a number of large carnivores. Other felines including Jaguars and Pumas prey on the smaller Ocelot, along with Birds of Prey such as the Harpy Eagle and the world’s biggest snake, the Anaconda. The unique and distinctive fur of the Ocelot though actually provides it with some camouflage in the dense vegetation surrounding it but it is also this fur that has led to enormous population declines throughout much of its historical range. Hunted for their fur (known as pelts) particularly from the 1960s to the 1980s, the Ocelot nearly became extinct in the wild along with the fact that they were also captured and kept as exotic pets. Since the Ocelot became a protected species though in many countries, numbers have risen but they are now threatened by deforestation of their habitats.

In a similar way to many other species of smaller wildcat, the Ocelot has been kept as a pet by many people throughout history. The most famous of these was the abstract artist Salvador Dali who was known to travel frequently with his domesticated Ocelot. It was even thought that Mr Dali actually took his pet Ocelot on an ocean liner! The Ocelot is also thought to have been worshipped by ancient Peruvian cultures (in a similar way to the Ancient Egyptians worshipping cats), and these cultures would often depict the beautiful Ocelot in their art work. The Ocelot is thought to be active for at least 12 hours a day and can travel distances of up to seven miles in that time, with males generally covering twice the distance of their female counterparts.

The Ocelot was seen as a sacred animal by ancient cultures but its beautifully patterned and soft fur quickly attracted the attention of hunters. Ocelot population numbers were severely depleted throughout their natural range particularly during the 1960s and 1970s when they were thought to be so extensively hunted, that up to 200,000 skins were being traded each year and were selling for around 40,000 US dollars. Despite being wild and dominant predators, the Ocelot has also been captured to sell into the exotic pet trade which fortunately ceased after the Ocelot was listed on the Endangered Species List. Despite the fact that the Ocelot is now protected in most of the countries throughout its natural range and numbers have increased, populations particularly in certain areas are being severely affected by growing Human activity, primarily from deforestation and growing settlements.

Today, the Ocelot is listed by the IUCN as being a species that is of Least Concern of becoming extinct in their natural environment in the near future. Although some populations are small and unstable, the Ocelot is widespread but the general population trend is now decreasing. This is mainly due to habitat loss as vast areas particularity in the Amazon, are subject to drastic deforestation and no longer provide the dense cover and adequate food supply that the Ocelot needs to survive.

View all 14 animals that start with O

Are Ocelots herbivores, carnivores, or omnivores?

Ocelots are Carnivores, meaning they eat other animals.

What Kingdom do Ocelots belong to?

Ocelots belong to the Kingdom Animalia.

What class do Ocelots belong to?

Ocelots belong to the class Mammalia.

What phylum to Ocelots belong to?

Ocelots belong to the phylum Chordata.

What family do Ocelots belong to?

Ocelots belong to the family Felidae.

What order do Ocelots belong to?

Ocelots belong to the order Carnivora.

What type of covering do Ocelots have?

Ocelots are covered in Fur.

What genus do Ocelots belong to?

Ocelots belong to the genus Leopardus.

Where do Ocelots live?

In what type of habitat do Ocelots live?

What are some predators of Ocelots?

Predators of Ocelots include jaguars, pumas, and harpy eagles.

How many babies do Ocelots have?

The average number of babies an Ocelot has is 2.

What is an interesting fact about Ocelots?

The Ocelot is also known as the Painted Leopard!

What is the scientific name for the Ocelot?

The scientific name for the Ocelot is Leopardus pardalis.

What is the lifespan of an Ocelot?

How many species of Ocelot are there?

There is 1 species of Ocelot.

What is the biggest threat to the Ocelot?

The biggest threat to the Ocelot is habitat loss.

What is another name for the Ocelot?

The Ocelot is also called the painted leopard.

How many Ocelots are left in the world?

How fast is an Ocelot?

An Ocelot can travel at speeds of up to 38 miles per hour.