Makes runways through the long grasses! Click through all of our Quokka images in the gallery. 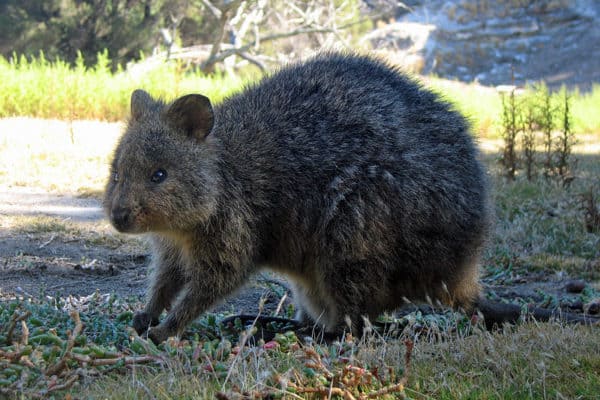 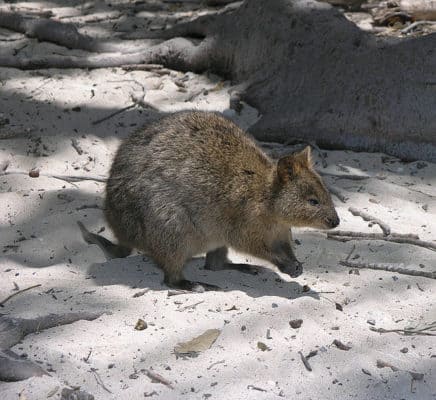 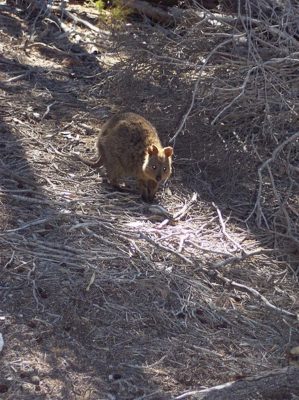 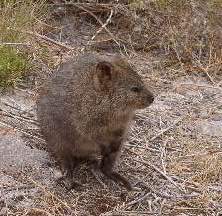 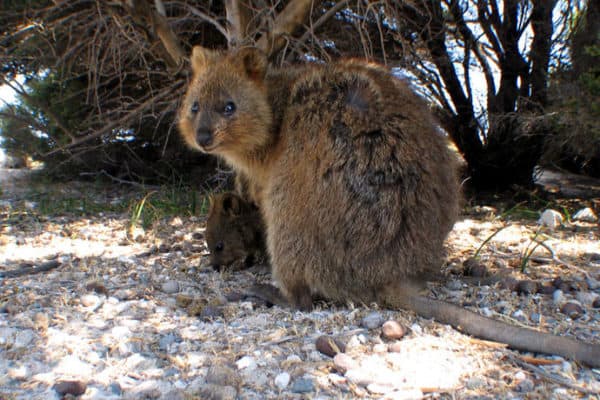 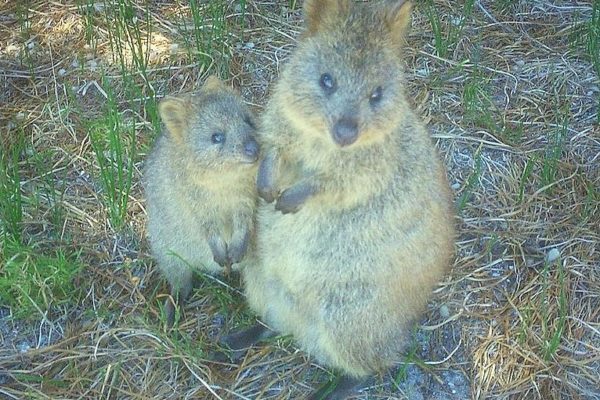 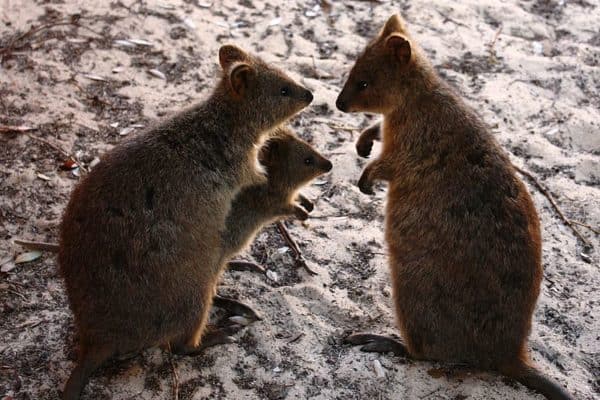 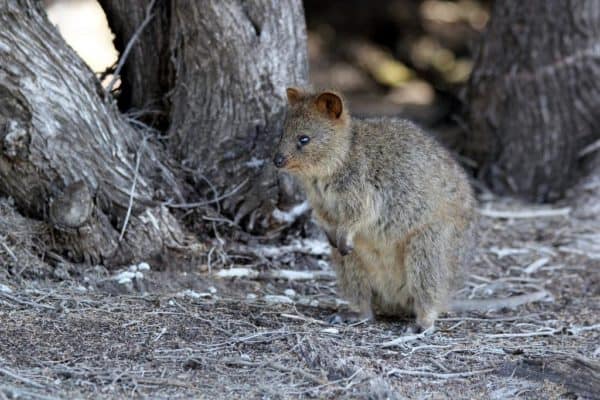 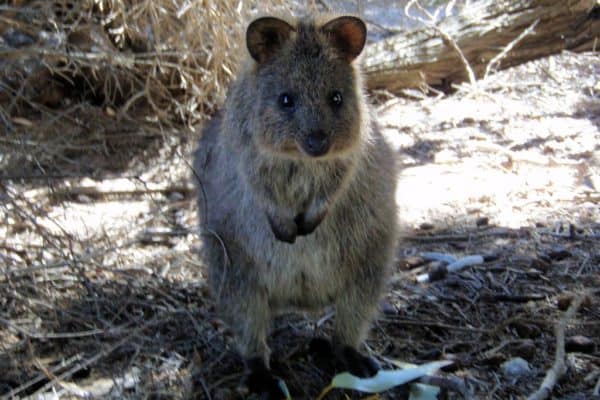 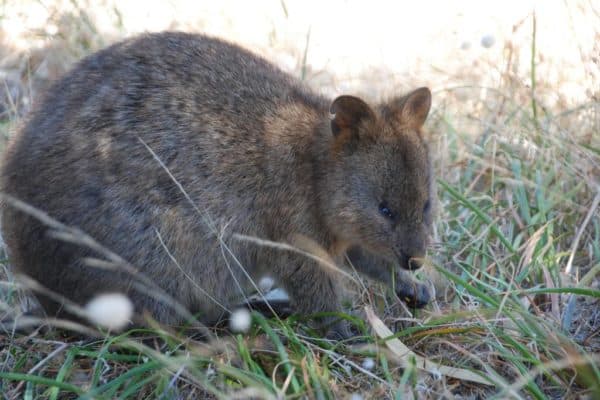 View all of the Quokka images!

The Quokka is a small marsupial that is natively found in parts of the south-west of Australia and on only two islands off the south-west coast. The Quokka is one of the smallest Wallaby species in the world, and most distinctively differs from other Wallabies with their short and barely-furred tail and small hind legs. Out of the roughly 50 known Kangaroo and Wallaby (and other marsupial) species on the continent however, the Quokka is one of three whose ancestry is still fairly hazy today. The fact that the Quokka browses for food rather than simply grazing makes it quite different to other species, but despite all this, many agree that they are most closely related to the Rock Wallaby.

The Quokka is a small species of Wallaby that has a rounded and compact body. Their hind legs and tail are much shorter in comparison to those of many Wallaby species, but allow the Quokka to hop through the thick vegetation and tall grasses with immense speed. The dense fur of the Quokka is fairly coarse and usually brown or grey in colour, with reddish tinges around the face and neck, and generally lighter in colour on the underside. Along with its rounded body, the Quokka also has small and rounded ears, and a rounded snout that is tipped with a black nose. Unlike other Wallaby species, the tail of the Quokka has hardly any fur on it at all and they also don’t need it to balance whilst they are hopping along.

Historically, the Quokka was an animal that had quite a wide distribution and was once found throughout the coastal regions of south-western Australia. Today however, the Quokka has been restricted to three remote regions, only one of which is actually on the Australian mainland. The most numerous populations of Quokka are found on Rottnest Island and on neighbouring Bald Island, with a few isolated groups also inhabiting the bushland that surrounds the city of Perth on the mainland. In these island environments, Quokka are most commonly found in thick forest, open woodland and areas of scrub that are close to fresh water. Their preferred habitats are always close to water, and the Quokka can also be found along the edges of swamps.

The Quokka is a very sociable and friendly animal that inhabits south-western Australia in small family groups, which are dominated by the males. Despite this though, the Quokka is not known to be territorial with up 150 individuals known to have over-lapping home ranges. Although they are known to share these habitats peacefully most of the time, fights between males are not unheard of, particularly on a hot day when they compete for the most sheltered spots. The Quokka is a nocturnal animal that spends most of the hot day, resting in the shade of the trees and will often return to the same spot every day. At night, the Quokka then begins to browse for food using tunnels through the long, grasses to move about unseen.

The breeding season for the Quokka tends to occur in the cooler months between January and March, when a single joey is born after a gestation period of just a month. Like all other marsupial babies, the joey manages to crawl into its mother’s pouch completely unaided, when it then attaches itself to one of the female’s teats. The Quokka babies suckle from their mother in the pouch for around 6 months whilst they continue to develop. At this time, the joey emerges for the first time and begins to explore its surroundings but remains close to the female, continuing to suckle on her milk for at least another couple of months. In captivity though, breeding can take place all year round once the individual is mature enough to mate at about a year old.

Like other Wallaby species, the Quokka is a vegetarian, meaning that its herbivorous diet is solely comprised of the surrounding plant material. The Quokka is an animal that most commonly feeds on different grasses that line that tunnels that they make through the dense vegetation. They are also known to eat leaves, and fruits and berries when they are available. Although the Quokka mainly browses for food on the ground, they are also known to climb about a meter or so up into the trees, and also swallow their food without chewing it. The Quokka then regurgitates the undigested material in the form of a cud, which is also eaten. They have no need to drink vast amounts of water and are said to be able to go for months without drinking at all.

Before European colonists reached the coastal regions of south-west Australia, the Quokka populations were thriving and were widespread throughout the area. With people however, came domesticated predators like Cats, Foxes and Dogs and their settlements also attracted wilder animals including Birds of Prey and Dingoes. Since the introduction of these predators to the Quokka’s habitat, their population numbers have dropped considerably. They are also now restricted to small pockets of their natural habitat on mainland Australia due to loss of habitat to growing Human settlements, as the demise of their daytime resting sites is thought to be linked to the declining population numbers.

Quokka family units are most commonly found in areas close to one another, where there is a decent source of fresh water. Even though they prefer these moist environments however, Quokka’s are known to actually gather most of their moisture from the vegetation that they eat, meaning that they can also be found in regions that are actually quite far from the nearest river or stream. Despite the obvious differences between the Quokka and other Wallaby species, their small size has enabled them to become masters of the undergrowth. The Quokka creates tunnels that they use as runways through the dense vegetation, which they are then able to hop extremely fast along when threatened by a predator.

Since the 1930s, the Quokka populations have been isolated in three remaining areas (two of which are on islands) because of the introduction of foreign predators. The Red Fox that came to Australia with European settlers has actually caused the most damage to this ground-dwelling marsupial, as they were eaten on both the mainland and on the islands that the Quokka inhabited along the south-west coast. Now however, the Quokka populations on Rottnest Island in particular, attract numerous tourists every year and although the Quokka are very friendly towards these people, foods like biscuits that are fed to them, often upset their stomachs.

Today, the Quokka has been listed by the IUCN on their Red List as an animal that is Vulnerable in its surrounding environment. The highest populations are today found on Rottnest Island, along with Bald Island, where they are thought to be happily sustained due to the lack of Red Foxes. There are however, now concerns over the Rottnest Island population due to increasing development on the island, mainly for recreational purposes.

View all 4 animals that start with Q

Are Quokkas herbivores, carnivores, or omnivores?

What Kingdom do Quokkas belong to?

Quokkas belong to the Kingdom Animalia.

What class do Quokkas belong to?

Quokkas belong to the class Mammalia.

What class do Quokkas belong to?

Quokkas belong to the class Mammalia.

What phylum to Quokkas belong to?

Quokkas belong to the phylum Chordata.

What family do Quokkas belong to?

Quokkas belong to the family Macropodidae.

What order do Quokkas belong to?

Quokkas belong to the order Diprotodontia.

What type of covering do Quokkas have?

Quokkas are covered in Fur.

What genus do Quokkas belong to?

Quokkas belong to the genus Setonix.

Where do Quokkas live?

In what type of habitat do Quokkas live?

What are some predators of Quokkas?

Predators of Quokkas include foxes, cats, and dogs.

How many babies do Quokkas have?

The average number of babies a Quokka has is 1.

What is an interesting fact about Quokkas?

What is the scientific name for the Quokka?

The scientific name for the Quokka is Setonix brachyurus.

What is the lifespan of a Quokka?

What is a baby Quokka called?

A baby Quokka is called a joey.

How many species of Quokka are there?

There is 1 species of Quokka.

What is the lifespan of a Quokka?

What is a baby Quokka called?

A baby Quokka is called a joey.

How many species of Quokka are there?

There is 1 species of Quokka.

What is the biggest threat to the Quokka?

The biggest threat to the Quokka is habitat loss.

How many Quokkas are left in the world?

How fast is a Quokka?

A Quokka can travel at speeds of up to 20 miles per hour.